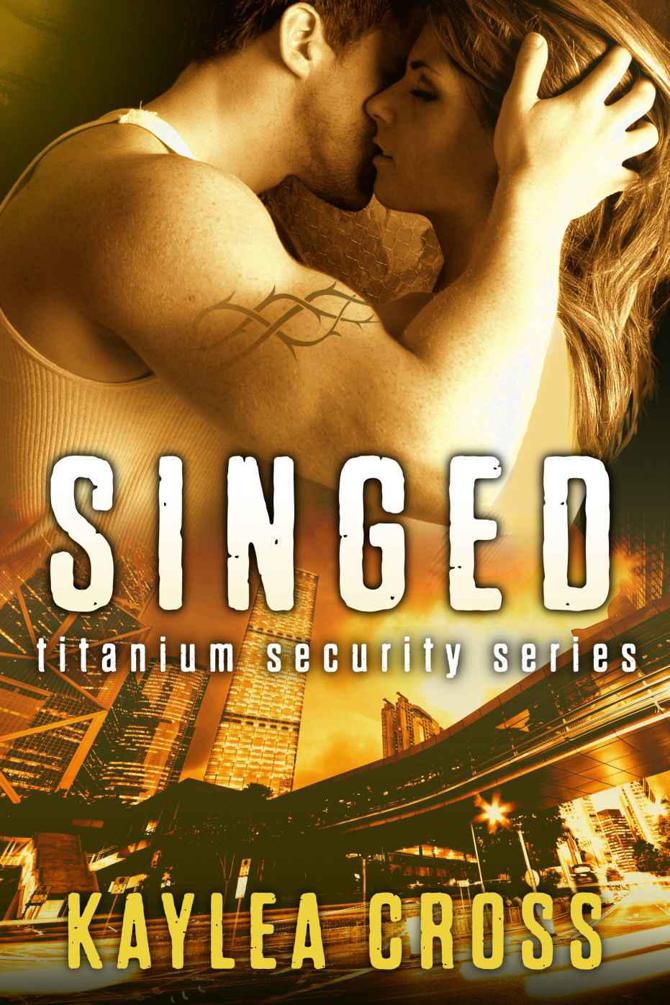 This book is a work of fiction. The names, characters, places, and incidents are products of the writer's imagination or have been used fictitiously and are not to be construed as real. Any resemblance to persons, living or dead, actual events, locales or organizations is entirely coincidental.

All rights reserved. With the exception of quotes used in reviews, this book may not be reproduced or used in whole or in part by any means existing without written permission from the author.

I dedicate this book to all those veterans and their families struggling with the battle against PTSD and suicide. A great group I’ve come across fighting this epidemic is
Battling BARE
. To learn more about them and their brave efforts or how you can help, please check out
their Facebook page
.

This is the second book of my
Titanium Security
series, and I hope you love Gage and Claire’s story. I’m such a sucker for reunion/second chance stories, and this one really tugged at my heartstrings.

Up next…Ex FORECON Marine Sean Dunphy and a woman you’re about to meet in the pages of
Singed
.

Rushing to a last minute meeting early on a Monday morning didn’t exactly bode well for the rest of her week. Walking as fast as she could in her four inch heels, Claire was halfway from her car to the front door of the imposing black Fort Meade NSA headquarters building when her cell rang. It wasn’t even seven a.m., so whoever was calling probably didn’t have good news. With a mental curse she slowed enough to dig through her purse then continued hurrying to the entrance as she checked the screen.

She bit back a groan when she saw her father’s number on display and answered anyway. “Hi, Dad. I’m just on my way into an important meeting and I’m in a rush, so I can’t talk right now.” Her boss’s call had woken her from a dead sleep at five thirty and she had less than ten minutes to get up to his office for the impromptu seven o’clock meeting. Whatever it was about, it had to be big. The nervous flutter in her belly intensified.

Her father didn’t ask her to call him back later or bother with small talk. “Your brother had a really bad night last night. Won’t talk to me. Can you stop by on your way home from work, check up on him?”

Claire pursed her lips and bit back a sigh. Well there was no one else to do it, was there? “I don’t know what time I’ll be done today, but yeah, I’ll stop by on my way home.”

“Love you too.” That was the hell of it, she thought as she disconnected. She loved both the maddening alpha male veterans in her life.

Shoving her phone away, she smoothed one hand over her hair to ensure it was still in the hasty bun she’d twisted it into upon leaving the car, and strode to the entrance of the building. Once through security and up the elevator, she left her coat at her work station and snagged a cup of coffee before hurrying to her boss’s office. She waved at Ruth, Alex’s sixty-something personal assistant, as she passed and received the same in turn. Outside her boss’s closed door she paused to take a deep breath and collect herself, then knocked.

She found Alex on the phone, his attention riveted to whatever he had pulled up on his computer screen in the center of his wide desk. He sliced a glance her way, his silver eyes doing a swift assessment of her before turning back to his monitor. Claire sat in a chair opposite his desk and waited for him to finish, fighting off her nervousness. She checked the clock on the wall. One minute to seven, and she was the only one here. That didn’t seem good.

She folded her hands in her lap as she waited, her mind churning with all kinds of unsettling thoughts. Was she in trouble again? Two weeks ago she’d tripped the NSANet while doing a favor for a…friend that entailed her poking around for information that might help him and his defense contract team while they worked a high risk job in Pakistan. What she’d found by pure chance had triggered a shit storm here at the NSA.

That single
favor
had resulted in a multi-agency investigation and manhunt for Malik Hassani, former senior official with the Pakistani ISI, now wanted for his connections with Tehrik-i-Taliban Pakistan cell responsible for multiple attacks there. Including the kidnapping and murder of philanthropist John Patterson, and the subsequent attempts to kill his daughter, Khalia.

At last Alex finished his conversation and hung up the phone, then turned his pale gaze on her. Though he’d just turned fifty he was still an imposing man, a former Special Forces NCO who’d served multiple combat tours in Iraq before leaving the Army and joining the NSA. Right now that steely stare reminded her so much of her father’s when she’d done something wrong as a kid, her palms turned clammy.

“We’ve got a situation,” he said without preamble.

Obviously, if he’d woken her with a phone call to bring her in this early. “I figured that. But am I the only one you brought in for this meeting?” Because that might mean really bad news. Maybe she was facing some sort of disciplinary measures for looking up classified info for someone outside the agency without permission.

“The others are with the director right now. They’ll be here when they’re done.”

Holy shit, the director? Whatever was going on, it was bigger than she’d realized. She tried not to let her unease show, glad that at least she didn’t seem to be in any sort of trouble with the agency. “So what’s up?”

He took a manila file from one corner of his desk, opened it and slid it toward her. “Since you discovered his surfacing in Islamabad, the agency’s been heavily involved in finding Hassani. He’s still holed up somewhere, nobody knows where for sure, but most analysts think he likely got across the border into Afghanistan. At any rate, as of early this morning the cell he’s connected with just became a threat for our national security.”

What?
Frowning, she took the folder from him and looked at Hassani’s picture on the first page of the document. Middle aged, heavyset Pakistani man with deep set black eyes and a neatly trimmed mustache and goatee. She flipped the page and scanned the content about his apparent affiliation with the TTP cell, the recent attack on the girls’ school in the Swat Valley, built and operated by John Patterson’s scholarship foundation Fair Start. After he was murdered his daughter, Khalia, had gone in his stead, and almost died because of it.

That’s when Claire had become involved with everything. Because of their recent history together, a member of Khalia’s security team had contacted Claire for the favor that had started this whole chain reaction of events in the first place.

“After they attacked the hotel where Khalia Patterson was staying, a prisoner was brought in to authorities in Islamabad. Name of Youssef Khan,” Alex continued.

Claire’s eye shot to his. Khan was the guy she’d been checking up on when she’d tripped the system. Her heart beat faster. “What did he tell them?”

“Nothing that’s helped us find Hassani so far, but through various ongoing investigations we’ve learned about a new plot they’re hatching. John Patterson had a lot of wealthy, powerful friends, including the current republican senator for Massachusetts who plans to run for President in the next election.”

“Larkin?” He’d been all over the news lately.

“That’s right. Not only has he just vowed to start a congressional hearing about what really happened the night Patterson died and the subsequent riots that killed American security contractor Scottie Easton, he’s also donated a shitload of money to Fair Start and is now serving as its unofficial figurehead. Then last night we got word from the FBI that the TTP cell might be planning an attack to target him here on US soil. A hit like that could involve a large scale terrorist attack on a soft target.”

“In Boston?” A big city with so many potential targets, and the senator lived and worked there. If that was the TTP’s plan, she hoped authorities could stop any attack before it happened.

“Don’t know for sure, but authorities there aren’t taking any chances. They’ve already beefed up security on all public transportation, stadiums and whatever.”

Jesus. “So the attack’s imminent?”

The room felt a few degrees colder all of a sudden. “What sort of timeframe do they think we’re looking at?”

“Could be days. Could be weeks or months.”

That was scary as hell, but she still didn’t understand what this whole thing had to do with her, other than having found out about Hassani by accident in the first place. She knew Alex would never call her here this early just to give her a simple briefing. “And you’re telling me this…why?”

“Because you’re about to be part of the taskforce tracking this threat.”

Whoa. Not even remotely what she’d expected to hear this morning. “So I’m definitely not on probation then?”

The corner of his mouth twitched in the barest hint of a grin. “Well, this way you’ll make yourself even more useful and I’ll still be able to keep my eye on you.”

Claire relaxed and smiled back at him. Excitement pumped through her veins. Ever since she’d landed a job here she’d been waiting for the chance to become part of something important, be more than just a cryptologist, and now she had one. “What do you need me to do?”

Alex leaned back and folded his hands atop his flat stomach. “As of today you’ll be pulled from whatever you’re working on to start with the team I’ve set up. You’ll be doing signal analysis, looking at encryptions and whatever else we need. Zahra Gill will be your linguist and help you with your workload when you need it.”

The Wild Mustang (Dale Jackson Series Book 1) by Anders, JD
Dead Unlucky by Andrew Derham
THEM (Book 0): Invasion by Massey, M.D.
Baby It's Cold Outside by Susan May Warren
Women's Bodies, Women's Wisdom by Christiane Northrup
All I Want... Is You by Shakir Rashaan, Curtis Alexander Hamilton
The Social Animal by Brooks, David
The Gringo: A Memoir by Crawford, J. Grigsby
The Gobi Desert
Promises to Keep by Maegan Beaumont