Read Something to Be Desired Online

Something to Be Desired 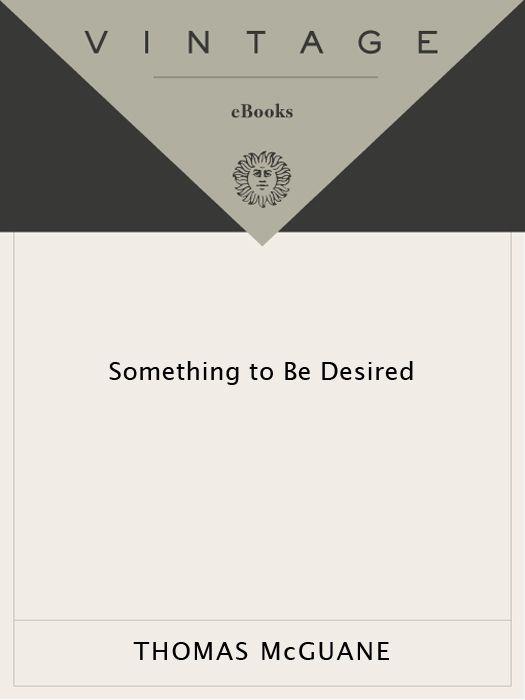 Acclaim for
THOMAS M
C
GUANE’S
Something to Be Desired

“Vintage McGuane: the same strong, clear prose, the same flair for the comic and the absurd, the same romantic awe of nature and of women.… Funny, invigorating, thoughtful.… It’s as good as any novel I’ve read of his, including his manic
The Bushwhacked Piano
.”

“McGuane’s writing seems to have moved on with the decades.”

“Nobody writes so well about the incongruities of modern western America.…
Something to Be Desired
is as invigorating as a fresh whiff of sage straight off Thomas McGuane’s Montana uplands, and a welcome relief from the overly wrought and overly cautious fiction of so many of his contemporaries.”

“McGuane has brought us closer to the pain this time, without compromising his keen sense of drama or comic genius.” 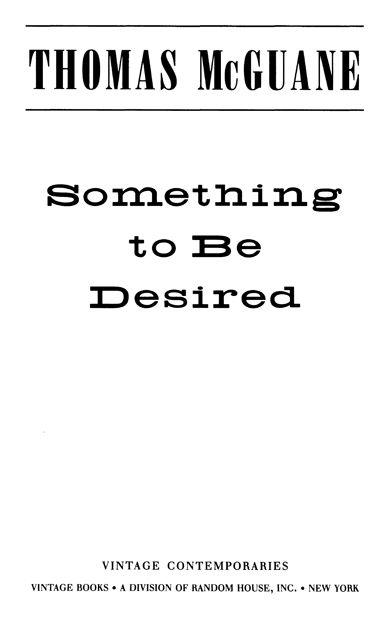 There is no question that the dog who is really ready for a big trial is on the threshold of committing grave mistakes.

The moon lofted off the horizon to drift low over the prairie, white and imperious as a commodore. While the two walked, their shadows darted over the ground and through the sage. The boy went along, concentrating on the footing, which was secure and reliable except where the washes had undercut ledges that sloughed quickly beneath them. His father strode ahead in silence, his boots making a steady beat unmodified by the boy’s breathlessness. The boy still wore his baseball jersey and had a green sweater tied around his waist. The wind came out of the draws and breathed through them toward the lights of town.

“You out of breath?”

“Keep moving.” His father made forward in vengeance, then asked, “Do you feel like you’ve been stolen?”

His father had returned after hiding from his mother, hiding in, of all places, Arequipa, Peru, where he had cooked on sheep dung and drunk too much and mailed deranged letters to his son until his son flunked his courses and got kicked off the baseball team. Then on a
morning when the boy spent still another Saturday at home, away from his beloved third base, the father walked in and said, “What’ll it be, Lucien? Where do we go?”

Lucien, a small-town boy buried in Ernest Thompson Seton, said, “Up in the hills.” He was baffled by his father’s dramatics but, more than anything, happy to see him again.

Now they were lost. They had been lost for two days. Not seriously lost, because they could see the lights of Deadrock; but they had lost their own camp on the rocky escarpment of the Crazy Mountains. And though they could have walked to the highway in a few hours, they still hadn’t had food in days. Their feet were blistered; twice the father had curled up on the ground before walking the great circle again with fury and self-pity. When he heard the boy’s hard breathing, he said, “You’re a baseball player and I’m fifty. Keep walking.” Lucien was silent. He thought of his books and wondered if they were still on the study-hall desk, in the nearly empty room with its clock, superintended by a history teacher one week, an English teacher another, some bored man with a paperback spending his time miserably. Lucien’s sudden fall to flunking seemed strangely permanent. One upperclassman called him a forceps baby. The light of detention fell through institutional windows upon Lucien and the books that had suddenly gone dead on him. He was homesick and there was no home, nothing to fill a caissonned heart, until the blazing satisfaction of his father’s arrival, descended from the inexplicable Arequipa, Peru, where Lucien pictured Indians and colonials circling his father through the divorce. It was the year of the vicuña scandal in Eisenhower’s administration.
The profanity of his father’s departure seemed to the boy to infect national politics. Furthermore, his mother didn’t want to give the family another try. “It’s quits,” she said of the marriage.

Lucien began to think, If we cannot find the camp, we’ll have to go to Peru. Moreover, his last history lesson, possibly still open on the study-hall desk, concerned the Teapot Dome scandal. Lucien knew that Teapot Dome was out here somewhere, maybe between here and camp; and around it were the ghosts of crooks in vests and homburgs, crooks with money. He had already learned that in America the very good and the very bad had money to burn.

“If you want to give up,” said his father, “we can start toward the highway.” His face was charged with suffering and there was a slight whistle in his breath.

Lucien looked him over. “I don’t want to quit,” said Lucien. “I want to find our camp.”

“We did this sort of thing at fifteen thousand feet,” said his father shakily. “In the Andes.” Lucien knew his father’s companion in Peru, a Billings car dealer named Art Clancy, also on the run from divorce. Art weighed two hundred thirty pounds. Lucien had a harder time picturing him at fifteen thousand feet than he had picturing his father. Art was a famous lady-killer, even at his weight; he had a secret apartment and a Corvette. There was some connection between these things and the separation of Lucien’s parents. One hung-over morning, according to Lucien’s mother, Art Clancy and his father had joined the winter segment of a thing called the World Adventure Series. It was a tour that went to Peru, where the Indians wore stocking caps with earflaps and where Lucien’s father, deprived of his secretary, wrote
Lucien the only handwritten letters Lucien had ever seen of his. The writing was strong and linear and spoke of romantic escape: sometimes Lucien’s father was alone the romantic escapist; sometimes Lucien and his father were depicted in the letters as escaping; sometimes there was anger and glory, sometimes just anger. In all cases it was the world that was against them, a world that no longer cared for the individual with his dread of homogeneity. Sometimes not one word of the letters could be read. It was like the night Lucien’s mother had made a tape recording of his father, and he went after her. Because of that, Lucien’s father went out the door with the police, and the next thing was the World Adventure Series to Peru with Art Clancy. Lucien’s mother called Lucien’s father a coward, a strong word.

Lucien began to know where they were. He could have said so right away. Instead, he took a very slight lead until they were around the bottom of the low cliff. His father didn’t know they were on the trail again. Above them, the rock was black and spilled stars in a bright path to the lighted clouds. It was the perfect trail to get jumped on from above, by a cougar or a gook: Lucien had no idea who lived around here. But he did know it was more than a backdrop for his father and himself, more than an illustrated letter. For some reason he didn’t tell his father they were on the trail once more. He could hear the whistle in his father’s breath as though some small rigid thing were stuck in his throat, some forceful thing.

A cloud of crows lifted from a depression between small hills, revealing the most remarkable hot spring imaginable, a deeply colored blue hole with pale steam blowing from its surface to tangle its streamers in the trunks of sage. For a brief time the two forgot their
troubles as they floated in thermal blue. They saw the world through a gentle fog and they talked in the simplest statements.

Lucien’s father spotted some ranch buildings in the distance. “This must be private,” he said; and they left.

Then you could see their camp, a grim, improperly erected pup tent with canned food in a pile by its entrance. They had been gone nearly two days, and when his father saw the tent, he groaned and trotted toward it. He threw himself on the ground beside the cans; his curved and exhausted back heaved for a long time. Lucien wondered whether this was a heart attack. “Are you okay?” he asked but got no answer. He hated himself for not knowing appropriate first aid.

Lucien began to build a fire. There was plenty of dry wood. There were matches and a patented product that he squirted into the wood. In a moment they had fire and heat.