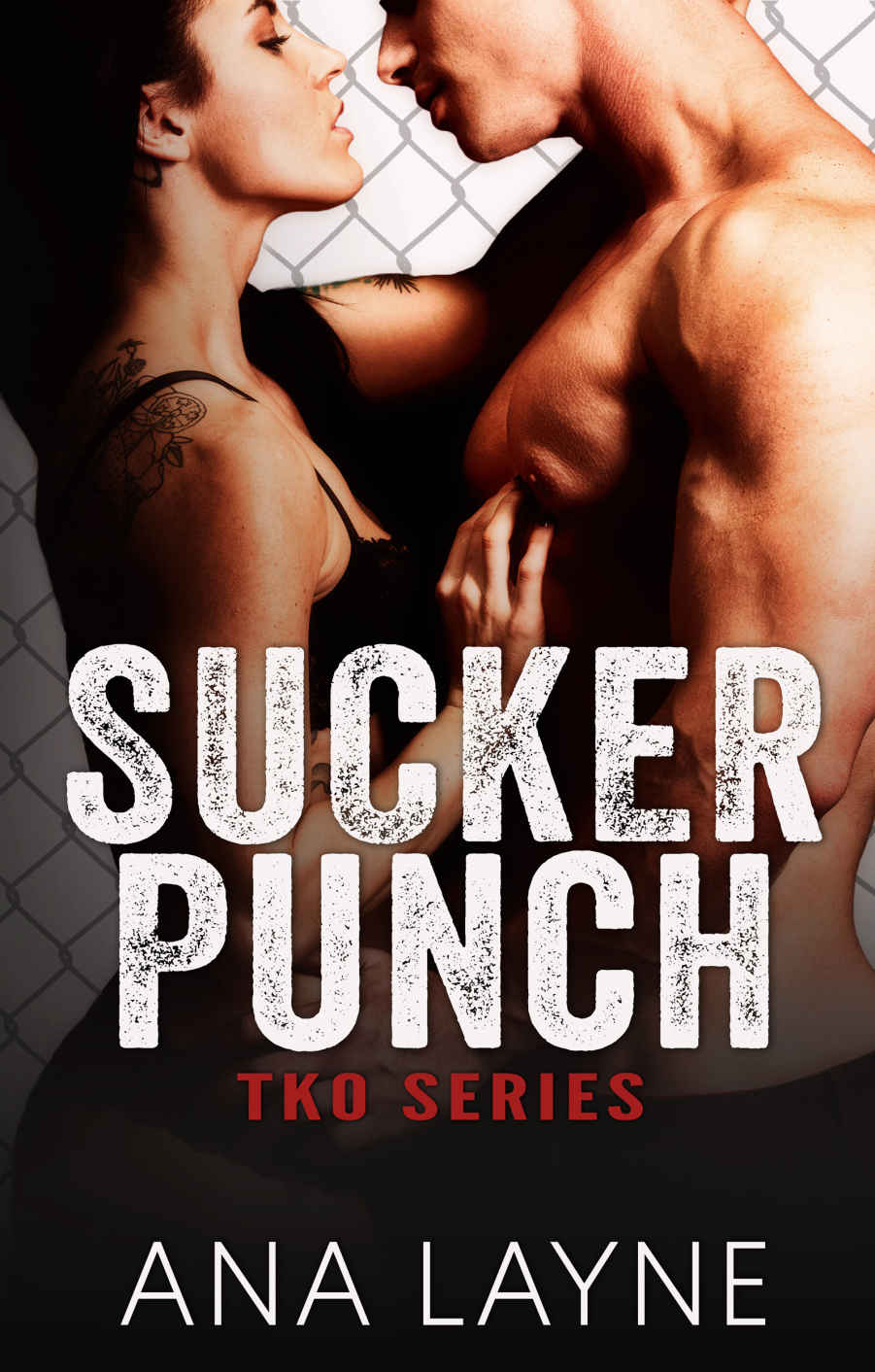 No part of this book may be reproduced, scanned, or distributed in any printed or electronic form without permission. Please do not participate in or encourage piracy of copyrighted materials in violation of the author’s rights. Thank you for respecting the hard work of this author.

This is a work of fiction. Names, characters, places, and incidents either are the product of the author’s imagination or are used fictitiously, and any resemblance to locales, events, business establishments, or actual persons—living or dead—is entirely coincidental.

This book is dedicated to my dear friend Delisa.

Austin is all yours, eat your heart out!

A few months ago my life forever changed. I wanted Tamilyn, but maybe I didn’t want her enough because she slipped right through my hands and into his. What a fool I was to believe I had a chance. My fighting seemed to be all I had and that’s not even mine anymore.

I mean, I probably could, but who fights with one arm? Lots of people I’m sure. I haven’t actually checked statistics on it or anything so I can’t make that assumption. All I know is one minute I had two fully capable, working arms and the next, I was waking from a surgery I wasn’t even aware I had undergone to learn my right arm was amputated. A cute nurse had the daunting task of breaking the news to me. I’ll never forget the way she looked with her curly brown hair and baby blue eyes and the sympathy she felt for me while I cried. All I wanted was my arm back, but the damage had been done.

I lie in bed, reminiscing about everything as if it were yesterday. The nurse has not left my mind since my stay in the hospital. In my dreams and even as I do something as simple as watch TV, she seems to be everywhere. At least I have a memory, because I doubt I’ll see her again. I’m surprised at how quickly I was able to forgive Ruston and Tamilyn for what they did behind my back. It’s not like I had some concrete claim on her. Since leaving the hospital, I’ve watched them get closer. It’s actually so cute it makes me want to fucking vomit. It’s easy to see now all along they were meant to be together.

I glance at the clock and notice it’s a little before eight in the morning. I guess I need to get my ass in gear and head to the gym. I’m thankful as hell for that little hole in the wall. Even when my life was falling apart, it held me together and has been there for me since. I never imagined Howard would ask me to help train the guys after my accident. For sure I thought I was done for. I was sure I would have to pack up my life yet again and go back home. I didn’t want to go back home; that place has nothing for me anymore. Yeah, my parents are there and I love them, but Houston
is my home now.

Functioning without my right arm has proven to be quite a chore. I guess I never realized just how much I took having two arms for granted until one was taken away. I grunt in frustration as I struggle to get my shoe on. I can hardly tie it and tears spring in my eyes.

I don’t realize Ruston is still home until he comes barreling into my room. “Hey man, you all right?”

“Do I look all right?” I bite back at him. “I can’t tie my fucking shoe.” The tears just begin falling down my face. I never cry. It takes a hell of a lot to make me break down and completely lose my shit and this is one of those moments.

“Here, let me help you.” Ruston kneels down and I watch as he grabs my laces with both hands. I’d do anything to have my real right arm again.

“I think I’ll just start wearing boots or flip flops,” I grumble while I watch him. He makes it look so damn simple.

He looks up at me with a sad hue to his eyes. I wasn’t trying to make him feel bad for anything; it’s my fault I got behind the wheel of his truck that night. No one forced me into it.

“I’m so sorry, man,” Ruston tells me for probably the millionth time, and my reply is always the same.

I stand on my feet, thankful I at least have both of those. I grab my prosthetic arm and carefully put it on. I stare down at the hook on the end and frown. I’m anxious to go see a doctor. I know technology is improving every day and I want something different than this. I don’t care what I would have to pay.

“You need a ride to Lou’s, or is someone coming to get you?” Ruston asks me.

I take the prosthetic arm off and toss it onto my bed. I haven’t driven since the accident. I’m too damn nervous to step behind the wheel of a vehicle. “If you don’t mind, I’ll take that ride.”

“You’re not wearing your arm?” He frowns.

“Nah, I don’t want to today. I just want to be me.” I sigh as I step out into the hallway.

I didn’t know Tamilyn was here, but she’s standing in the kitchen drinking a cup of coffee. “Hey, Austin.” She walks over to me and wraps her arms around my neck. It’s funny, I feel nothing for her anymore. I wrap the one arm I have around her back and give her a gentle pat.

“Are you okay?” she asks as she breaks the hug. I notice she’s staring at my eyes. Fuck, I forgot I was crying just a moment ago.

“Oh, uh, yeah. Just a little setback. I, uh, couldn’t tie my shoes.” My eyes instantly move down to the shoelaces Ruston was gracious enough to tie for me.

“Tam, you don’t need to feel sorry for me, okay?” I try my best to assure her.

She nods and turns to glance at Ruston. I know they both feel bad, but I’m tired of the sympathy. It’s in the past, what happened is done, and I wish they could just move on like I’m trying to do.

We all walk outside together and I watch as Tamilyn gives Ruston a quick kiss bye. I could think of a million other things I’d rather watch right now but it’s whatever. I climb into Ruston’s new truck and buckle my seatbelt. At least I can do this one thing.

Ruston climbs in and we begin to make our way down the road. “You need anything before we get to Lou’s?”

His attempt at small talk is lame but I appreciate it. I look out the window and politely tell him “No, thank you.” He pulls into the parking lot of Lou’s in a matter of minutes and offers to help me out of the truck.

“Do you need me to get you later?”

“Nah, I’ll get someone inside to bring me home.”

“See you later,” Ruston calls out as I shut the door.

I sigh as I approach the front door. This is the one place that makes me truly feel good inside and out. I may be changed, but this place, it never changes, and for that I’m fucking grateful. I pull the door open and walk in, accepting the smell of testosterone and sweat. Ah, smells like heaven.

I approach the office and peek my head inside. Howard is laid back in his chair snoring. I chuckle and step back, bumping into someone.

“Whoa, watch it. You’re going to make me mess up my hair.” Lance laughs. He scared the crap out of me, I didn’t know anyone was around.

“You’re an ass. How’s Tyler?” I ask about their new baby boy.

“I’m a sexy ass. He’s just like his daddy, awesome. What’s Howard doing?” He nods towards the office.

“Not for long.” He laughs again, even louder this time as he jumps inside and yells, “Wake up, motherfucker!”

Howard almost falls out of his chair, startled by Lance’s job as our built-in alarm. “Were you raised in a barn?” he mumbles as he sits up. His eyes are red like he’s been sleeping a while.

“Maybe.” Lance grins, crossing his arms over his chest.

I told Ruston I didn’t want anything, but when Lance announces he wants a sausage biscuit, my stomach begins begging me for food. I chime in my order and he writes it down on a scrap piece of paper.

“Tired much?” Lance asks Howard. I notice Howard is wearing the same black shirt and gray wind shorts as yesterday, but I don’t say anything.

“Hell, y’all may as well hear this from me instead of Garrett or Whitney, but we got in a big fight last night. These damn pregnancy hormones seem fucking worse this time around. She took Randi Lynn and went to stay with Garrett, and I just couldn’t stand to stay in the apartment, so I came here.”

“Oh fuck. I’m sorry, man,” I tell him before Lance can spit out something sarcastic.

“We’ll be okay. I just don’t like fighting like that. I don’t like my family being threatened. She’s never threatened to leave but she did last night. If I lost her and Randi Lynn, I don’t know what I would do.”

“Well, like you said, you’ll be okay. I bet y’all make up today.” I offer him some hope as he stands.

“We all know Whitney loves you. Obviously y’all hump like rabbits since you knocked her up again,” Lance finally is able to chime in. Howard actually chuckles. I wasn’t sure he would.

“I’m going to get breakfast. I’ll be back. Don’t burn anything down while I’m gone.” Howard stares dead at Lance, who throws his hands up defensively.

“Why does everyone seem to think I’m the troublemaker?” he asks all innocently before bursting out into some sort of demented laugh.

Once he steps outside, I turn to face Lance. “So what are we doing first today?”

“Well, I don’t know about you, but since the boss is out for a minute, I’m sitting on my ass. You know he’s going to work us to death because it’s how he deals with his personal turmoil.”

“What are you talking about?” I ask him. I’ve only been at the gym for a few short months before the accident, so everyone here is still fairly new to me.

“Anytime he and Whitney fight, we pay the price here. He’s being nice now but he’ll snap later, so enjoy the free time. Hey, where’s your arm?” he asks. I was waiting for someone to notice, but at the same time, it’s nice I can walk around and know they aren’t gawking at me and my disability.

“I didn’t want to wear it today. I know I got it for a reason, but I don’t like it. I’m probably better off without it.”

“I can’t say I blame you. You look pretty badass no matter what. It’s pretty fucking epic your tattoo is still there,” he points out.

I laugh at his ‘badass’ comment. If only he knew the breakdown I had this morning trying to tie my damn shoes. Then he wouldn’t think I was so badass anymore.