Read Surfaces and Essences: Analogy as the Fuel and Fire of Thinking Online

Surfaces and Essences: Analogy as the Fuel and Fire of Thinking 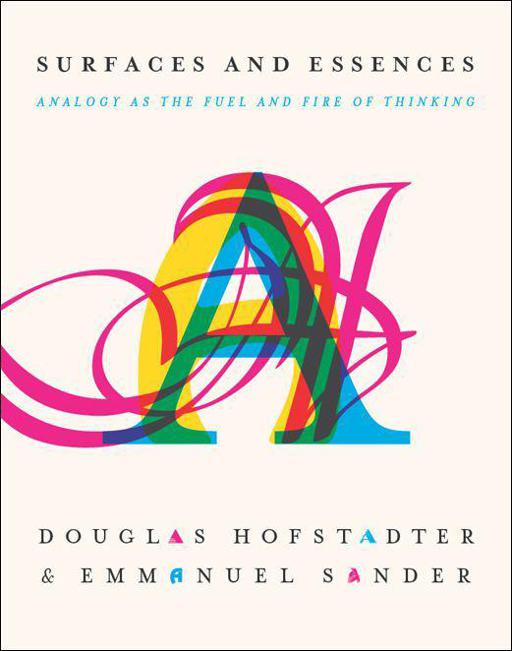 B
ASIC
B
OOKS

Grateful acknowledgment is hereby made to the following individuals and organizations for permission to use material that they have provided or to quote from sources for which they hold the rights. Every effort has been made to locate the copyright owners of material reproduced in this book. Omissions that are brought to our attention will be corrected in subsequent editions.

We also most warmly thank Kellie Gutman and Tony Hoagland for their generous permission to publish their poems in this volume.

All rights reserved. No part of this book may be reproduced in any manner whatsoever without written permission, except in the case of brief quotations embodied in critical articles and reviews. For information, please contact Basic Books at 250 West 57
th
Street, New York, New York 10107.

Books published by Basic Books are available at special discounts for bulk purchases in the United States by corporations, institutions, and other organizations. For more information, please contact the Special Markets Department at the Perseus Books Group, 2300 Chestnut Street, Suite 200, Philadelphia, Pennsylvania 19103, or call (800) 810-4145, ext. 5000, or send an email to:
[email protected]
.

To Michaël, Tom, and Talia

Prologue
Analogy as the Core of Cognition

Chapter 1
The Evocation of Words

Chapter 2
The Evocation of Phrases

Chapter 5
How Analogies Manipulate Us

Chapter 6
How We Manipulate Analogies

Chapter 8
Analogies that Shook the World

Epidialogue
Katy and Anna Debate the Core of Cognition

As we look back, fondly reliving the genesis of our book, we vividly recall the first key moment, which took place in mid-July, 1998, at an academic congress, in Sofia, Bulgaria. The occasion was the first international conference on the subject of analogy. Organized by Boicho Kokinov, Keith Holyoak, and Dedre Gentner, this memorable meeting assembled researchers from many countries, who, in an easy-going and lively atmosphere, exchanged ideas about their shared passion. Chance thus brought the two of us together for the first time in Sofia, and we found we had an instant personal rapport — a joyous bright spark that gradually developed into a long-term and very strong friendship.

In 2001–2002, Douglas Hofstadter spent a sabbatical year in Bologna, Italy, and during that period he was invited by Jean-Pierre Dupuy to give a set of lectures on cognition at the École Polytechnique in Paris. At that time, Emmanuel Sander had just published his first book — an in-depth study of analogy-making and categorization — and at one of the lectures he proudly presented a copy of it to his new friend, who, upon reading it, was delighted to discover how deeply similar was the vision that its author and he had of what cognition is really about. And then some time passed, with a couple of brief get-togethers in Paris and Toulouse, supplemented by email exchanges and phone calls, mixing intellectual content and friendly feelings.

In February of 2005, Doug invited Emmanuel to Bloomington for a gala birthday party he was throwing for his many friends, as he turned 60. One day during that event, he suggested to Emmanuel that he would be very happy to come to Paris for a few weeks to work with Emmanuel in translating his book into English. Emmanuel was very pleased, but shortly after Doug arrived in Paris in July, the original goal mutated into a considerably larger one — namely, that of co-authoring a book on the fundamental role of analogy in thought, approaching the topic in a non-technical manner and from many points of view, and using a large sampling of concrete examples to justify the theoretical positions. The book would hopefully be accessible to anyone interested in thinking, yet would also have the high ambition of reaching an
academic audience and of putting forth a new and original stance towards cognition. This thus was the moment of our book’s conception!

Over a three-week period in Paris, many ideas were tossed about, and the result was a forty-page document that featured snips of conversations between the two future co-authors, many notes on ideas for the book, and a very preliminary sketch of what its chapters might look like. And then, for the next four years — 2006 to 2009 — each of the authors made a month-long visit to the other one in his home town. Adding to that, Doug spent an eight-month sabbatical in Paris in 2010. During all this time, there was a constant exchange of ideas via email and via phone, allowing the book to evolve from a few cells into a viable complex organism.

As all this shows, the present book is the fruit of a long collaboration, and finally it has reached maturity. Its authors have invested in it the hope that it has a message with enduring value, even if it is clearly rooted in today’s culture and style of life — in fact, it is rooted “in vibrant thought”, as we fondly recall one of our friends putting it. But we hope that, despite the spatial and temporal specificity of its origins, its key ideas are universal enough that they will withstand the passage of time.