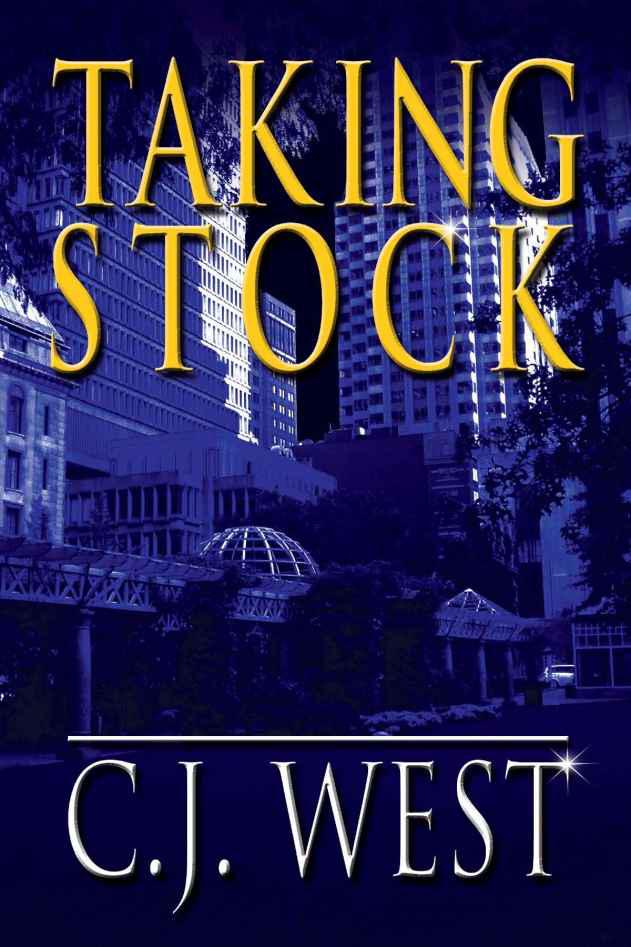 C.J. develops his characters brilliantly and makes them easily identifiable with and believable, unlike so many characters who seem to need a cape and cowl to do what they do in suspense novels. --Frank Cinnella

A chillingly accurate Thriller. Taking Stock is all too real, and downright uncomfortably exciting. --Carolynn Evans for Curled Up With a Good Book

THE END OF MARKING TIME

... West has brilliantly portrayed a world gone crazy where the rule is there are no rules, or are they. Crime fiction meets science fiction in this awesome thriller." --Book Bitch

Powerful, thought provoking and massively entertaining... I loved this book and the way it made me root for someone who I knew I shouldn't like. --CrimeSquad.com

...the book was spellbinding. The plotting is brilliant, and Randy is an exquisite character, an evil genius for the modern age. --Debra Hamel

This book had me so hooked. I loved the plot ... unique and creative [with] just the right about of romance, sexuality, thrills, mystery, and just plain crazy ... --Tiffany Harkleroad, Tiffany's Bookshelf

CJ's latest offering is a blend of the thrillers we come to expect from him and a new touch of romance, actually a little steamier than just any old romance, so I like to call it a "steamy thriller." --Roxanne

Tiny magnetic dots locked deep in Boston's financial district hold the keys to $44 billion. The massive fortune is spread among seventy-five thousand customers and only the computers know exactly how the shares are divided at any given time. Millions are spent to keep the systems safe in their temperature controlled room and keep Internet-based hackers at bay. No one knows this better than the people assigned to safeguard this fortune. Erica Fletcher is one such guardian, buried by an insurmountable workload, precisely how she likes it. Beautiful, smart, tough, nothing can knock her off course and nothing penetrates her defenses. She's locked her emotions away and poured her life into her career. She's a superstar among her peers and a nightmare to any man who tries to control her. Erica's boss wants her out and their confrontation wakes Erica to a stark reality. She's traded her life for success and security, forever running from her mother's mistakes. Her roommate convinces her to slow down and just as her first real romance blooms, her life is thrown into chaos. Two hundred million has disappeared from the firm and the evidence all points to Erica. She fights for her life as she struggles to hold on to the new woman she's become.

All rights reserved.
No part of this book may be reproduced, stored in a retrieval system, or transmitted by any means, electronic, mechanical, photocopying, recording, or otherwise, without written permission from the publisher.

Requests for permission to make copies of any part of the work should be mailed to the following address: Permissions, 22 West Books,
P.O. Box 155
,
Sheldonville
,
MA

The following is a work of fiction. The characters and events are of the author’s creation and used fictitiously. This book in no way represents real people living or dead.

Other Books by C.J. West

* Brad Foster meets Charlie Marston, the hero of Sin and Vengeance, mid-way through this book.

As I write novels I am forever grateful for the opportunity to research so many facets of life in this world.  It is exceedingly interesting to learn about different professions, cultures, and life situations and I am greatly indebted to those who spend so much time sharing their life experience with me.

Special thanks to George Devin a seasoned internal auditor and audit manager for his help with Herman, Sarah, and Stan. He helped me understand their profession and how the personalities of real-life auditors relate to their successes and failures.

Thanks to
Monique Houde
, author of
Blinded by Love,
for her help understanding the ramifications of domestic abuse and how it impacts the lives of people real and fictional.
Eric
a shares traits with many successful women as she strives too hard to become all that her mother was not.

Thank you to my pre-release readers
Paul Babin
, Jady Bernier, and
Jay
Brooks. My utmost thanks to my wife Gloria who still manages to get excited about my work somehow.

Dedicated In Loving Memory to:

A single monitor glowed among the racks of black cabinets abuzz with the stirring of three hundred tiny electric fans. The server farm was hard at work crunching the day’s results down into thousands of reports for the investment managers to digest the next morning. The people who attended these machines and the $44 billion they guarded had long gone home. The constant drone of the two-ton compressor and the fans blowing cold air beneath the floor drowned out any sound beyond the glass walls and left him completely isolated in this narrow walkway between cabinets. His early fears had been replaced by a polished routine, a well-rehearsed alibi, and a knowledge that very few people remained in the office this late at night.

The machine finished its work with spectacular results, but this was not the time for celebration. Calmly his fingers tapped on the keys and the machine went to work erasing every trace of his work here tonight. Seconds later, the CD ejected and he slipped it into his bag. He arranged the server desktop the way he had found it, locked the glass cabinet door and slipped to the end of the row. There against the wall he watched for movements in the myriad reflections. He waited and listened nearly a minute before slipping down the ramp and out the door.

The cubicles beyond were silent, office lights switched off.

He eased down the hall ten feet to the security room door, slid the key into the lock and slipped in, gladly out of sight again. He’d be done in another few minutes. Very few people had access to this room, and those who did rarely stepped inside. Another series of cabinets lined two walls. These were filled with wires rather than computers. The single PC monitored the comings and goings at every entrance the company controlled. A few doors, like the one to this room, operated with keys, but most required a plastic access card. When someone opened an electronic lock their identity was captured here. He scrolled down the list looking for the problem he’d found several times before.

Here it was again.

She couldn’t enter nineteen and then get up here to twenty-two ten minutes later. None of the exits downstairs had been opened in that time. A few clicks and the evidence of her visit to nineteen vanished. It would be impossible to know who passed out the doors when she eventually left; impossible for anyone to piece together what he’d done.

He turned to the VCR and ejected the tape. The one he replaced it with looked old enough to have been around a few months. It had, although everything on it had been erased, just as the one in his hands would be before he returned it to the stack.

The monitor on the wall showed an empty computer room then several dim hallways around the building. She was there somewhere and it would be just his luck for her to get her face recorded coming in rather than out. Damn workaholic. If he was lucky, he’d get out before she left nineteen. The last thing he needed was to bump into her as he left the room. If the bitchy do-gooder got suspicious, getting in and out would be a nightmare and the whole thing would come to a halt. He couldn’t afford that.

The computer didn’t record his exit from the security closet. The only evidence he’d been there was in his black leather bag and that would be short-lived. He strode briskly for the lobby, far too intent for the hour. Alerted to his presence in the hall, the motion sensor unlocked the door with an audible click. The tiny electric device hummed as the latch was held open for him. The security computer logged an exit that could only belong to
Eric
a Fletcher.

Complications by Clare Jayne
Housekeeping: A Novel by Robinson, Marilynne
Always (Carter Kids #1.5) by Chloe Walsh
Blade Runner by Oscar Pistorius
Going Away Shoes by Jill McCorkle
Ice by Lyn Gardner
The Scorpion's Tale by Wayne Block
The Ice Harvest by Scott Phillips
The Witch's Daughter by Nina Bawden
Heart of the Nebula by Joe Vasicek