The Art of Standing Still 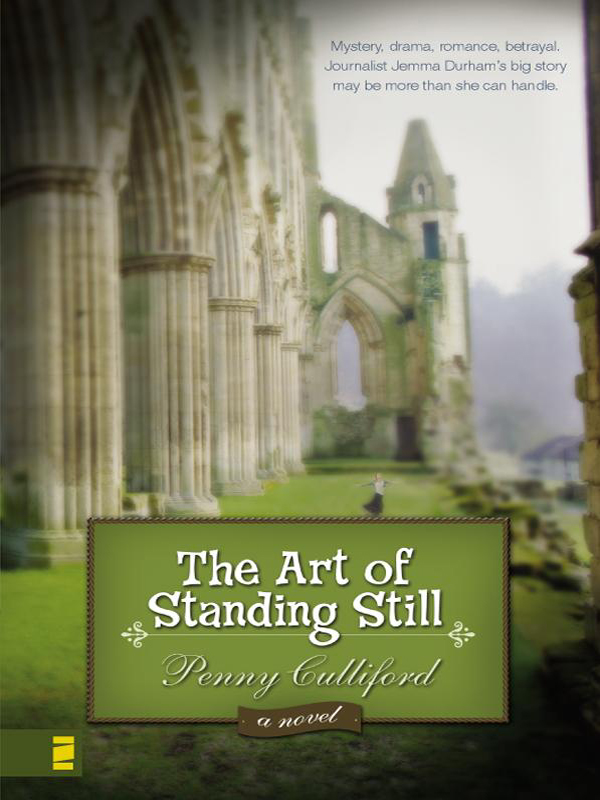 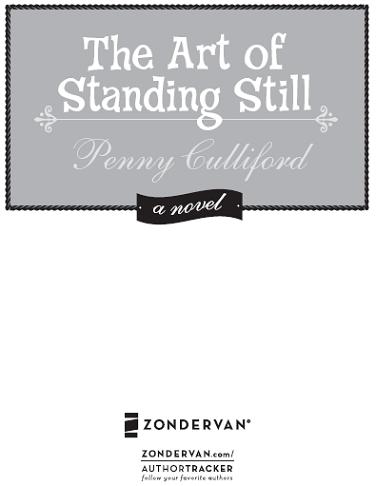 The Art of Standing Still
Copyright Â© 2007 by Penny Culliford

All rights reserved under International and Pan-American Copyright Conventions. By payment of the required fees, you have been granted the non-exclusive, non-transferable right to access and read the text of this e-book on-screen. No part of this text may be reproduced, transmitted, down-loaded, decompiled, reverse engineered, or stored in or introduced into any information storage and retrieval system, in any form or by any means, whether electronic or mechanical, now known or hereinafter invented, without the express written permission of Zondervan.

Requests for information should be addressed to:

Internet addresses (websites, blogs, etc.) and telephone numbers printed in this book are offered as a resource to you. These are not intended in any way to be or imply an endorsement on the part of Zondervan, nor do we vouch for the content of these sites and numbers for the life of this book.

All rights reserved. No part of this publication may be reproduced, stored in a retrieval system, or transmitted in any form or by any means â electronic, mechanical, photocopy, recording, or any other â except for brief quotations in printed reviews, without the prior permission of the publisher.

MY THANKS AND APPRECIATION FOR ALL THEIR HELP WITH THIS BOOK GO TO
Mike Tyler, Kit Bird, Alan Lyons, and Samuel Valentine for inspiring me with their experiences of the York Mystery Plays. To Lucy Brinicombe and Peter Unsworth for helping me to understand the workings of a local newspaper and Peter Cornwell for showing me inside a police station and so cheerfully answering my bizarre and gruesome questions. To Debi Simmons for musical advice. To Wintershall Estates, Surrey, for helping me to visualise the performance and for advice on costumes, and the Alexanders at Home Farm for inside information on cattle farming. Finally, my gratitude goes to my editor Diane Noble and to Sue Haward for reading it and helping me to make it make sense.

Christ is already in that place of peace, which is all in
all. He is on the right hand of God. He is hidden in the
brightness of the radiance which issues from the everlasting
throne. He is in the very abyss of peace, where there is no
voice of tumult or distress, but a deep stillness â stillness,
that greatest and most awful of all goods which we can
fancy; that most perfect of joys, the utter profound,
ineffable tranquillity of the Divine Essence. He has
entered into His rest. That is our home; here we are on
a pilgrimage, and Christ calls us to His many mansions
which He has prepared.

IT WAS THE SPLASH THAT WOKE JEMMA DURHAM.

She thought at first that it was a swan or one of the other water birds landing upstream, but the muttering and muffled cursing certainly didn't belong to any kind of waterfowl. She sat up and checked her alarm.

It was still pitch black. Wary of drawing attention to herself by switching on the light, she tiptoed to the galley end of the narrow-boat and edged back the curtain. She peered outside,
blinking back sleep.

Silhouetted in the moonlight, stood a person. He â or she â was dressed in dark clothes and leaned out precariously from the towpath. Jemma held her breath. The figure appeared to be holding a long pole, perhaps a branch or a boat hook.

She watched, intrigued yet horrified, as the figure dragged it through the water as if dredging the river. Or maybe searching for something.

Jemma returned to bed and tucked her knees under her chin. She wondered if she should call the police. What would she say? âThere's someone mysterious poking around in the river with a long pole?'

She could imagine the laughter. She couldn't lie still, not with the splashes and muffled mutters from across the river. She returned to her sentry post at the window. Half of her brain wished they would go away so she could get back to bed. The other half hoped they would fish up a dead body or something â anything that she could transform into a story for the
Monksford Gazette
, fry up, and present on a plate to her editor in the morning.

The figure seemed to be getting frantic, thrashing around with the pole in the water. Curiosity completely overwhelmed her. She pulled on her coat and Wellingtons and quietly unlocked the door. The water lapped slightly against the
Ebony Hog
's hull as she climbed up the ramp. She sneaked along the grass next to the towpath, avoiding the gravel surface so her footsteps wouldn't be heard.

As she crept closer, hiding in the shadow of the elder bushes and willow trees, she heard him utter a curse. A dog barked nearby. Jemma froze and held her breath.

The figure, she was sure now it was a man, straightened, listening.

They both stood motionless for what seemed like years. Then, to her horror, she heard a familiar tune. The phone in her pocket had started to ring. She unzipped her coat, groping frantically to silence it. But it was too late. He dropped the pole and ran with long strides up the towpath towards Todbourne Heath.

A car door slammed and an engine fired up. She stood, dismayed, as the sound grew more distant. She heard the car accelerate along the Fordbrook Road; then it was gone. Jemma looked up the river and saw the abbey illuminated in the moonlight. The dog barked again; then all was silent.

She glared at her phone. What kind of idiot rings someone at that time in the morning? She flicked through the menu.

Jemma didn't know whether to be furious or worried. One thing for sure â her cover was blown. That was the end of her surveillance operation for tonight. And she was none the wiser about who she had seen and what he was doing.

She turned and walked back up the towpath, not caring now how much noise her feet made on the cinder surface.

Back aboard the
Ebony Hog
, she stared at her phone. She hadn't spoken to Richard since âthe note.' He had made his feelings perfectly clear. She threw it into her handbag and lay down in bed. The events at the river and Richard's call jostled in her mind, and neither was likely to allow her the luxury of getting back to sleep.

No point lying there worrying; she needed get up and do something â anything. In college, she had written many essays in the early hours, and more recently, she had seen the sun rise several times while completing articles. She crawled out of bed again and put the kettle on. There wasn't much she could do about the stranger's ânight fishing trip', but she could find out what Richard was up to.

She extracted the phone from her handbag and took a deep breath as she pressed the call-back button.

âWhat do you want?'

âSorry for what? Sorry for leaving me or sorry for ringing me at three in the morning.'

God of the Game (Dreamstate) by Yan, Kit
Amnesia by Beverly Barton
Dead Secret by Beverly Connor
Bachelor Girl by Betsy Israel
This Is Where I Leave You by Jonathan Tropper
Moonlight: Star of the Show by Belinda Rapley
Specky Magee by Felice Arena
Royal Affliction (The Anti-Princess Saga) by Marsh, Jennifer
From a Dream: Darkly Dreaming Part I by Valles, C. J., James, Alessa
The Pact by Jennifer Sturman