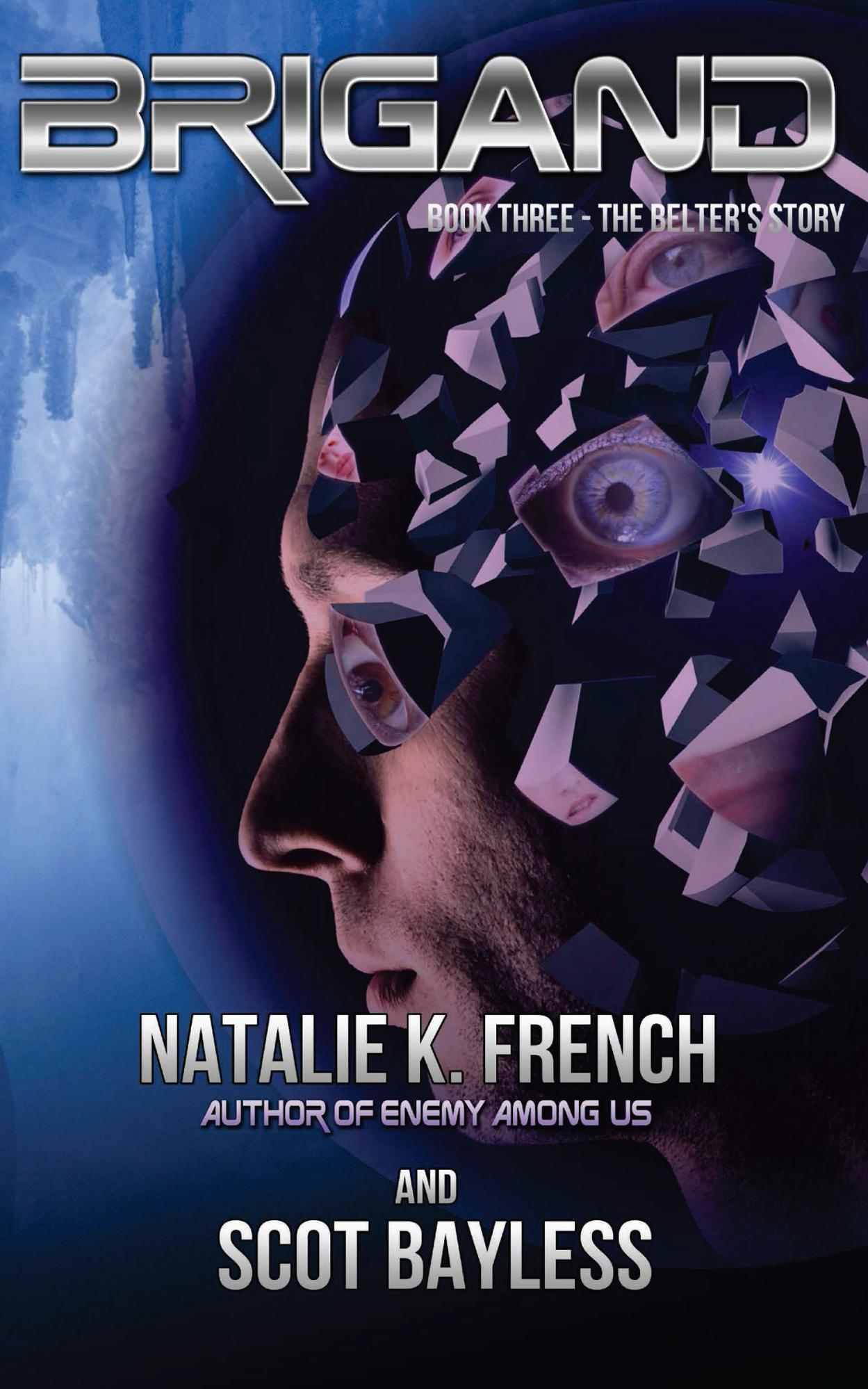 All rights reserved. This book or any portion thereof may not be reproduced or used in any manner whatsoever without the express written permission of the publisher except for the use of brief quotations in a book review.

Printed in the USA

Cover illustration by Scry Media LLC. Other illustrations used by permission and are the exclusive property of their originators or copyright holders.

The lavender-white icedigger groped for traction, rocking from side to side on its back while its dozen thickly armored anguipods waved helplessly. At the tip of each snakelike appendage, a pair of titanium-silicate pincers opened and closed reflexively, grasping for purchase that would never come.

I watched its desperation with care, offering no assistance, until Jase came by and hooked the toe of his boot under the creature's ten centimeter carapace, flipping it upright. Slowly, dorsal plates flexing as it plodded across the broken floor of the chasm, the digger worked its way back toward the clump of violet nodules wedged in the ice; towards its home.

"What are you doing out here, Crom?"

I didn’t like it when he shortened my name. A 'nickname' he said. I didn’t feel like reminding him for the millionth time that my name was Crom-
ley
. So I stuck with the question at hand. "I'm watching a digger struggle for life. At least I was —"

Jase cocked his head to the side and regarded me from behind blonde eyelashes. His helmet was fogged near the collar-ring, obscuring the serious set of his mouth. His green eyes scrutinized mine and we sat with mirrored attention. Neither one of us blinked.

"Why do you do that?" he finally asked.

I knew he could feel the turmoil inside me. Long ago, I'd come to realize that our shared DNA made us more aware of each other's mental state. I knew it, even if I didn’t understand it.

I’d been watching the diggers for a long time. They seemed to feed off of the deposits of violet-colored nodules that threaded through the ice. We called the stuff europine, after the moon of Jupiter where we made our home.

Speckled with black and colors that ranged from reddish violet to deep indigo, the nodules were everywhere in the rilles. We found them in clusters, more as we descended, closer to the ocean. They were mostly mineral, metallic silicates, kind of like geodes, except their interiors were full of organics, valuable ones — the kind you need if you're going to try to make a permanent home in the Outer. The kind you get from living tissue, that, even with nanomorphic assemblers, you simply can't manufacture. Before we discovered these strange little rocks, Earth and Mars pretty much had a chokehold on our food supplies. For the people out here, europine was more than a living, it was life.

We mined the nodules now. Hundreds of tons every year. It was slow work. The ice was too unstable for heavy equipment, forcing us to gather the nodules by hand. And the diggers were everywhere. They always flooded out of the ice during shift changes. Well, more shuffled really. They weren't that quick. But there were thousands of them, most no bigger than the palm of my gloved hand. I could scoop them up by the dozens whenever I cared to; whenever my curiosity needed satisfaction.

I knew there was so much more to Europa than what we could see. Even after a couple of generations, we had only the dimmest notions of what went on under the ice. There was an ocean down there. Salty, warmed by the heat of the moon itself, filled with living things we never saw. We didn't care. There was life on Europa, for all the good it did us. Everything was full of metal silicates. You couldn't eat them. You couldn't use them for anything. So we scratched out our living by picking up purple rocks and selling them to the Trade Guilds on Mundus. Nobody much cared about the rest.

But I'd noticed something. My bots seemed to act differently around the europine deposits. They seemed to be attracted to it, almost like the diggers — which made no sense whatsoever. Whenever I was in the rilles, my little ZB6 utility bot didn't malfunction as often around the stuff. It would seek out a nearby europine deposit and just sit there, hovering close, almost as if he was studying it. Without understanding why, I knew that its behavior was an answer to a problem I hadn’t known existed, that I didn't even know how to articulate. But I knew I wanted to figure it out.

Jase didn’t care about any of that, so I didn’t bother explaining. He preferred the company of people to bots, which was unusual for a Belter. We aren't the most social splinter of the human species. I never told him, but I considered myself to be one of the lucky ones in that he seemed to prefer my company over most others.

I felt a close affection for Jase. Perhaps I loved him. That's not something Belters do with ease. Love. Life in the Outer doesn't leave much room for it.

Between us, Jase was the better looking one. We were supposed to look the same and we did. At least we used to. I knew why we didn’t anymore, but I wasn’t ready to tell him — not yet.

"Why are you always messing with the icediggers?" Jase was forever in my business.

"I’m not messing with them."

"Mom says you should leave them alone too."

Irritation simmered in my belly, "Why do you call her that?"

"Because that’s what she is. What’s with you today?"

I knew he wanted to talk, but I wasn't interested. Jase always pushed against our way of life. It was exhausting. I exhaled deeply, causing a little bloom of vapor on the inside of my helmet. I could see myself reflected in the curve of plastic, a parabolic me with fog-colored eyes and white-blonde hair that was already turning gray in my thirteenth year. "Just call her by her name, okay? Call her Madera like everyone else."

"But she’s not everyone else’s mother. Only ours. I should be able to call her that." Jase was being obstinate today.

I muttered and pushed past him. My tiny SU-7 fixbot, 'Su', followed, checking for anything about my suit that might need attention. She seemed especially interested in the seal ring of my helmet and orbited my head like a drunken halo.

Jase made a shooing gesture at her. "Why do you have to bring that thing with you everywhere?"

"She's more useful than you might think." I commented as I slipped a small europine nodule into her intake hopper.

Fixbots are little factories. They're incredibly versatile, capable of fabricating just about anything they need for their repair jobs on demand. Normally, you'd stock them with standard base elements, but I'd had this idea, one that as far as I knew, nobody else had bothered with. I'd wondered what would happen if I let Su try her hand at picking apart europine.

The process can take a while. Sometimes a long while. Fixbots use nanites to do their molecular level magic, foregoing the speed of particle furnaces as a concession to the fact that they aren't as useful if they weigh ten thousand kilos and incinerate their owners. She'd been ingesting the stuff for months now, the experiment well under way. Su accepted the offering with a little chime.

Jase walked ahead of us, meandering as he always did, balancing on fractured blocks of ice, hopping from one to the next as he chatted about his upcoming trip. Our parents had paid dearly, six months of mining added to their tour, to get Jase passage to the Inner. He wasn’t meant for this life — the life of a Belter. Certainly not a Belter on Europa. Digging up little purple rocks by hand. Living subsurface to avoid Jupiter's ferocious radiation. Endless hassles with the Jovian Fuel Combine. None of us cared for it that much, but Belters are a stoic lot. Except Jase. Nothing about him fit the way we lived. That much was evident. He even avoided his bots.

I adjusted my wrist comp and the thick plastic straps that held the armored torso panels in place over my stiff exo suit. Only in the past few months had I been allowed to go into the deeper crevices and begin my apprenticeship. It was an art, our father, Sardar, liked to explain. Far more than hammering away at a pile of rock and ice. We shaped, sculpted, taking a craftsman's pleasure in finding our way through jagged seams to the best deposits.

There was a lot to know and more that could go wrong. The ice in the rilles was constantly shifting. On the surface, it was as hard as iron, but down here, closer to the ocean, it was softer and far less stable. Warmth from below made the ice shift and fracture, but we'd learned to take advantage of that, finding our way into newly opened spaces, to the europine.

Careless digging could kill you. So could a misplaced step. And sometimes, when you broke into a seam, the icediggers would come spilling out. They weren't dangerous one at a time, but a swarm was another story. Their little pincers could puncture a suit or lop off a digit with ease.

A miner's life was dark, dangerous and solitary. Which is why most tours in the mines lasted a few months at most. Survival wasn't the issue. We could last almost forever with the right equipment and supplies. The problem was more psychological. Too long in the ice and you could just lose it. Happened all the time. And my family was already coming up on eight months.

But Jase wasn't like us. Despite our genetic similarity, he wasn't like me at all. He had no talent for the work we did. In fact, he was a liability. He could never seem to remember the safety protocols, as if they wouldn't stick in his mind. He should have been a disappointment to us, but instead he was like some graceful pet. His light hair, his green eyes, his easy and unselfconscious charm. We all loved him — and we covered for him. He was our only luxury in a land of ice and stone.

"So where are we going this time?" I asked, as I finished my equipment check. My suit was encrusted with a dozen embellishments — extra armor against the cold and the occasional physical mishap, bot extensibles that I used to make the mining easier. Belters are resourceful if nothing else. We repurpose everything, including bits of our decommissioned bots. I'd even been thinking about integrating Su into my suit.

Jase continued to hop along next to me like an excited child while I tightened and checked straps and gear.

"It’s along the edge of that big rift. I found a cavern and you’ve got to see it."

"I thought you didn’t like going down there, into those tight spaces."

Fires of the Faithful by Naomi Kritzer
Ella Mansfield by Married to the Trillionaires
Dark End of the Street - v4 by Ace Atkins
Wicked Becomes You by Meredith Duran
Death of a Citizen by Donald Hamilton
Requiem's Song (Book 1) by Daniel Arenson
Law of Attraction by Patricia Keyson
Mike at Wrykyn by P.G. Wodehouse
The Lost Baby: A Ghost Mystery Story (Second Hand Ghosts Book 2) by Gillian Larkin
MoreLust by S.L. Carpenter