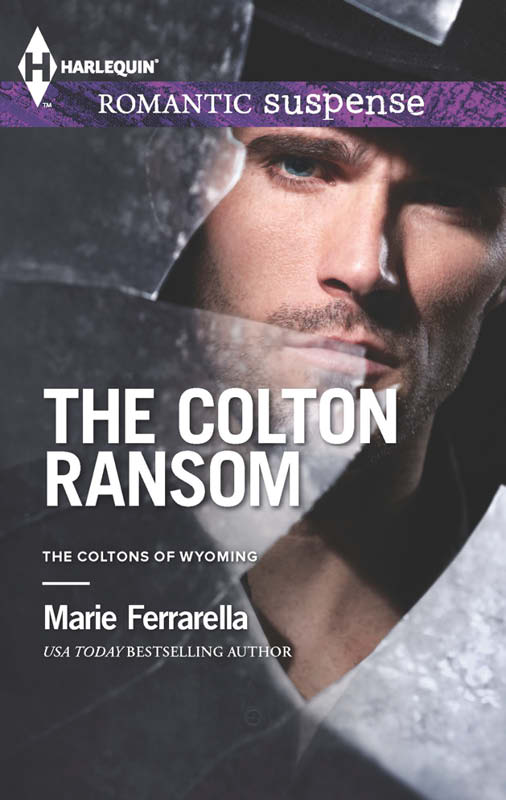 Former cop Trevor Garth left the line of duty, but his expert instincts are sharper than ever when crime strikes the Colton ranch. As ranch security, he has to step in—yet this time getting justice is personal. Mistaken for a Colton heiress and stolen from her crib, his daughter’s in the hands of a killer out for ransom. Desperate for an ally, he must rely on the woman determined to help him.

Gabriella Colton doesn’t think twice about joining Trevor’s search for his daughter. Beneath his world-weary exterior is a passionate man in need of someone to trust—with his baby and his heart. Now, when every second counts, their dangerous investigation draws them closer to each other...and their darkest threat.

“How can you stay so upbeat and optimistic?”

From what Gabby had just told him, her thoughts, her attitude, should be just as dark, as pessimistic, as his were.

“I have to,” she told him simply. “I have to believe that things do eventually work themselves out, that good triumphs over evil and that the sun will come up tomorrow,” she concluded, the corners of her mouth curving as she deliberately quoted a lyric from an old favorite show tune.

A lyric that, as she could see by the man’s totally unenlightened expression, was completely lost on Trevor.

But what wasn’t lost on him was that, despite the partial darkness within the cab of the truck, Gabby seemed to glow.

And there was something very compelling about that.

Before he knew it, Trevor had decreased the space between them within the truck until there wasn’t any—which was fine with him because he had no need of any.

At least not now, while he was kissing her.

Welcome back to Colton territory. Think you’ve heard it all in this world of ranches, wealthy cattlemen and wranglers? Think again. This time around we have Jethro Colton, a crusty, womanizing tough-as-nails patriarch who’s housed many secrets in this Colton empire.

Book one is centered around not only a murder, but the kidnapping of an infant, as well. Not just any infant, but the
wrong
infant. The kidnapper was out to kidnap ailing Jethro’s granddaughter and made off with the head of security’s three-month-old daughter instead because of a last-minute change in the infants’ sleeping accommodations. Jethro’s youngest daughter, Gabby, was responsible for the switch. Feeling horribly guilty, Gabby is willing to do anything to get the infant back; however, Trevor, the kidnapped baby’s father, doesn’t want her help. But that doesn’t stop Gabby and by the end of the story, Trevor discovers that he not only wants Gabby’s help, he wants Gabby, as well. Come join me for the journey from here to there. I promise you’ll like it.

As always, I thank you for reading and from the bottom of my heart, I wish you someone to love who loves you back.

Other titles by this author available in ebook
format.

This
USA TODAY
bestselling and
RITA® Award-winning author has written more than two hundred books for
Harlequin, some under the name Marie Nicole. Her romances are beloved by fans
worldwide. Visit her website,
www.marieferrarella.com
.

Where would we writers be without you?

Special thanks and acknowledgment to Marie Ferrarella for her contribution to The Coltons of Wyoming miniseries.

What the hell was he going to do with a baby? And a baby
girl,
to boot.

But boy or girl, one thing was a given. He didn’t know the first thing about taking care of something so helpless, so dependent. Hell, he hadn’t been taking care of anyone but himself for
years.
He had no idea how to
start
raising a kid, let alone an infant.

There had to be a way out of this. A way that, in the long run, would be better for the baby, not to mention better for him.

Almost two weeks into this so-called parenting thing and he still felt like a man who’d been pushed out of an airplane and was free-falling to earth without so much as a handkerchief to serve as a makeshift parachute.

Trevor Garth paced the floor in his bedroom as he stared at the crying infant he was holding in his arms. How could something so small make so much noise?

Or throw his entire heretofore orderly life on its ear?

At thirty-four, Trevor had assumed that his life would be winding down, settling into a predictable pattern. No more dodging bullets or chasing down armed criminals. That was one of the reasons he’d left the Cheyenne police force five years ago and taken this position as head of security here at Jethro Colton’s Dead River Ranch. In his experience, nothing much of any consequence happened here as long as you steered clear of Jethro Colton when the old man was in a mood—which was often enough. But he was good at keeping under the radar, doing what needed to be done without calling any attention to himself.

Trevor glared at the infant he couldn’t seem to appease or soothe, despite his attempts to rock Avery to sleep.

This, he thought darkly, was what happened when he took a vacation. Ironically, it had been the first one he’d taken in years. He’d gone off to Cheyenne for a few days just to unwind, tied one on at a local saloon one night—something else he rarely did—and picked up this hot little redhead who had killer dimples when she smiled. As the evening progressed, things got a little fuzzy. He was fairly certain, though, that they’d wound up at her place for the night.

The next morning, he made sure he was gone before she woke up. Less than a week later, he couldn’t even remember what the woman’s name had been.

And then practically one year to the day, there she was, standing on the doorstep of the mansion wing that was designated for the staff, holding a baby in her arms and saying it was his.

And just like that, he was supposed to take her word for it, supposed to just lie down and accept being someone’s parent?

He hadn’t even wanted to hold the infant, much less lay claim to it or even find out anything about it. His one-night stand—Joyce, he thought she said her name was—had other ideas, though.

For the most part, Trevor was a man of few words. And even those faded when he was caught off guard—the way he was when Joyce had just shown up out of the blue like that. He was all but speechless—other than saying the word
no,
as in “No, it’s not mine.” And “No, I won’t take her.”

After a pointless few minutes of one-sided arguing, Joyce left with the baby. Relieved, he thought that was the end of it. Showed just how naive he was about such things. Because when he walked out again, about twenty minutes later, there was the baby, bundled up and in something Joyce referred to as a “carrier.” Joyce herself was nowhere in sight. She’d just left the baby behind and assumed that he would take it from there.

And if that weren’t stereotypical enough, there was a note pinned to the baby’s blanket. All that had been missing from the scenario was a snowy scene.

“I’ve got nobody to help and I can’t do this alone,” the note had said. “She’s yours. You handle it.”

That was it. Just sixteen words. Sixteen words that turned his quiet world upside down.

And just like that, he was a father. An
unwilling
father.

“I don’t have time for this,” he said to the infant now, his deep voice rumbling ominously, like thunder over the plains. “I’ve got a job to see to and enough responsibilities without you adding to them.”

The baby—Avery—responded to his words by howling and crying even harder.

He had no idea how to get her to stop. The least the woman could have done was left some kind of how-to book along with the baby.

He’d done his best to try to locate Joyce again. But there was absolutely no sign of her in the nearby town. He’d gone back to the saloon where he’d initially met her. The bartender there had no clue who she was or where to find her.

Which meant he was stuck with this crying, damp responsibility, one who never seemed to sleep more than five minutes at a time.

“I’m too old for this,” he snapped impatiently.

Star of the East: A Lady Emily Christmas Story by Tasha Alexander
The Lost Trucker (The Trucker Saga) by Dewallvin, Rose
The Last Honest Woman by Nora Roberts
Possession by H.M. McQueen
To Tempt the Devil (A Novel of Lord Hawkesbury's Players) by Archer, C.J.
Gracie Faltrain Gets it Right (Finally) by Cath Crowley
The Heartless City by Andrea Berthot
Reilly 09 - Presumption of Death by O'Shaughnessy, Perri
Radio Gaga by Dixon, Nell
Gods and Godmen of India by Khushwant Singh