Read The Cross and the Curse (Bernicia Chronicles Book 2) Online

The Cross and the Curse (Bernicia Chronicles Book 2) 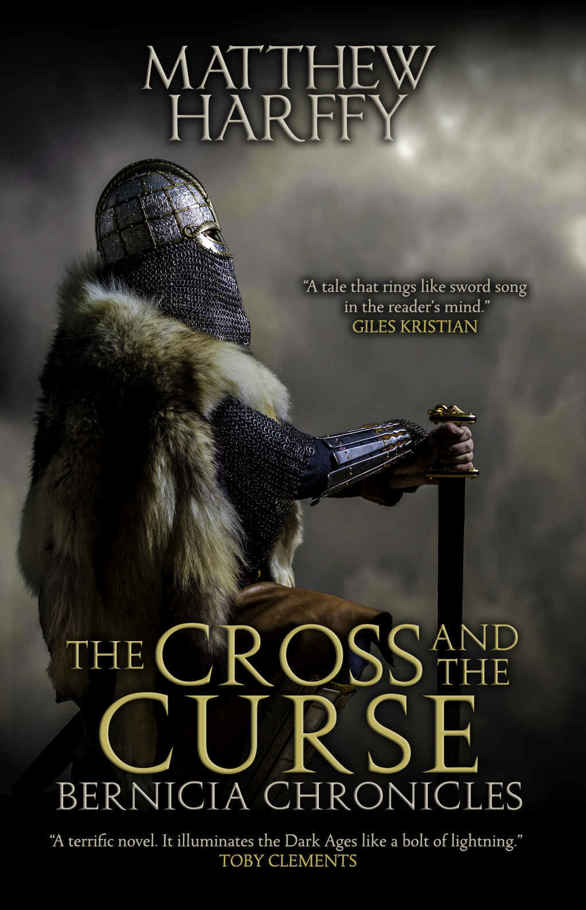 THE CROSS AND THE CURSE

Praise for The Bernicia Chronicles

For my parents, with love

Place names in Dark Ages Britain vary according to time, language, dialect and the scribe who was writing. I have not followed a strict convention when choosing what spelling to use for a given place. In most cases, I have chosen the name I believe to be the closest to that used in the early seventh century, but like the scribes of all those centuries ago, I have taken artistic licence at times, and merely selected the one I liked most.

"We do not need your new god. He is weak. Was he not killed by men?" The raven-haired beauty turned to her audience with a savage smile. But the eyes of the men and women who glared back were dim and dark, like deep meres from which no warmth came.

"What god can be slain by mortals?" the woman sneered.

"I do not seek to battle with you," the thin, hawk-faced man before her said. "I am simply bringing the word of the one true God to you and your people. Edwin King has granted me the right." The man's words were difficult to understand. His strange accent garbled the sounds, but the meaning was clear enough.

Some weeks before, a pedlar had ventured up the valley for the first time since the snows thawed and had told tales of fabulous things afoot in the land. King Edwin's bride had brought a holy man with her from her homeland of Cantware. But this priest was from even further away, if such things could be believed. It was said he was from the land of the giants who had built the Great Wall, but that was ridiculous. Everyone knew they were all dead now.

And this man was no giant. Yet he did carry himself as one sure that others would follow.

"One true god?" she spat. "Only one god? You are mad. What of the sky, and the water? Battle, and the crops of the earth? Each has its own god, we know this." Again she looked to the villagers, but stony silence met her gaze.

"There is only one God," the slender priest said, speaking as a father explaining something to a small child. "He sacrificed, Jesu Christ, his only son, so that no man should know death, but have everlasting life."

The woman recoiled as if he had struck her.

"Mother?" A boy stepped close to the woman, reaching out hesitantly to touch her arm. He was a swarthy youth, at that awkward age close to adulthood, yet not quite a man. Tall and strong, but without the bulk that came with age.

He knew that his mother would never willingly allow this stranger to speak of his god to the villagers.

She would kill the priest first.

The boy looked at the warriors who had come with the priest. They stood nervously holding their horses' reins. They were grim-faced. Killers. Light glinted from sword hilts, and burnished byrnies of iron. His mother's magic was strong, and she might kill the priest, but her own death would follow close behind.

"Silence, Hengist," she hissed, pushing him away.

She turned her face to the sky and let out a piercing shriek.

Startled, the horses shied and snorted. The warriors tugged on the bridles.

"Leave this place!" she screamed, her beautiful face contorted into a mask of fury. "Begone and do not return! Take your weak god and his son and go back to the land you came from." A strong wind blew down the valley suddenly, whipping her black hair about her face. Her dress pressed to the contours of her body.

She began to tremble and shake. Hengist had seen her do this countless times. She always did so when the gods spoke through her. He shivered. The gods were preparing to speak and he was frightened of what they might say.

A broad-shouldered man with greying hair and a stern jaw stepped forward, shaking off the hands of his wife, who tried to hold him back.

"Wait, Nelda," he said. "I would hear what this man has to say about his god. A god that does not demand sacrifice and promises life rather than death. This is a god I would hear tales of."

For several heartbeats Nelda glowered at the man.

"Do not think to tell me what to do, Agiefan," she said, her words full of contempt.

Then, with a cry even louder than the first, she spun to face the dark priest once more.

"No! You bring lies to poison our minds. Lies!" She reached into the leather pouch that hung from her belt and drew forth several small items. Without hesitation she flung them at the stranger. He flinched as the small objects, white against the dark wool of his robe, hit him and fell to the ground. They were human finger bones.

The priest touched his head, then his chest, then each shoulder, in a magical symbol of some kind.

Nelda screamed in words of a tongue none there could comprehend. The wind tugged the words from her mouth and shredded them. A great flock of rooks flew overhead, black against the darkening sky. Stinging grit from the path spattered into Hengist's eyes. The air itself crackled with the promise of violence. Mothers pulled their children away, shielding their eyes. Nelda wielded the power of the gods in her voice and all there stepped back from where she stood.

All except the priest.

He was unmoving, with eyes closed. His lips moved, but he spoke too quietly for the onlookers to hear.

His lack of response seemed to enrage Nelda even further and her voice began to crack, her throat tearing with the force of her arcane words.

One of the warriors stepped forward, drawing his sword. The priest, sensing the movement, held out his hand for the man to halt.

Nelda's cries and exhortations to the gods continued for some time, until at last, the words dried in her throat and she stood before the stranger, panting and wild-eyed, foam flecking her lips.

He opened his eyes then, this man who spoke of a new kind of god, and held out his right hand towards the witch. In his left hand he clutched a silver amulet that dangled from a thong about his neck. Hengist saw that it was similar in shape to the hammer of Thunor; a cross, like the sign the priest had made over his chest.

Nelda's shoulders heaved from her exertions. For a moment there was silence, only broken by the rush of the wind that now howled in the valley.

Then, in a clear voice, the priest said, "In the name of our Lord Jesu Christ, I, Paulinus, command you to leave this place, that these people may know the true word of God."

Nobody moved. The ferocity of the wind lessened. A calm settled on the valley. Nelda's mouth began to twitch into a smile. It seemed this stranger's god would not speak.

And then, with a sound as loud as mountains collapsing, the shadowed vale was lit with the white brilliance of lightning. The bolt crashed so nearby that people screamed out, in fear for their lives. It was as if the sky itself had fallen. Women threw themselves to the ground, protecting their children with their bodies. Several of the warriors' horses broke free and galloped down the valley track, eyes white-rimmed with terror.

The thunder-crash was deafening. The air was rent with a ripping sound, followed instantly by a hammer-crash blow of god-like intensity. The echoes rolled down the valley. Was this a display of Thunor's anger? Had he heard Nelda's screams of defiance at this new god?