Read The Crucible of Empire Online

The Crucible of Empire 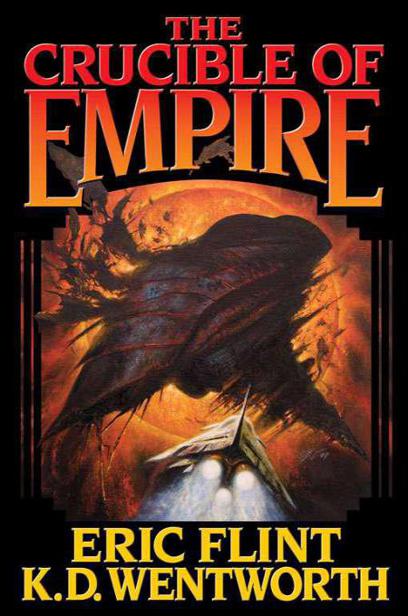 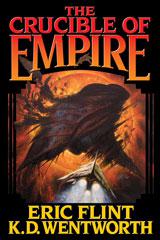 The Crucible of Empire-ARC
by
Eric Flint & K. D. Wentworth

This is a work of fiction. All the characters and events portrayed
in this book are fictional, and any resemblance to real people or incidents is purely coincidental.
Copyright © 2010 by Eric Flint and K. D. Wentworth
A Baen Book
Baen Publishing Enterprises
P.O. Box 1403
Riverdale, NY  10471
www.baen.com
ISBN 10: 1-4391-3327-1
ISBN 13: 978-1-4391-3327-9
Cover art by Bob Eggleton
First Baen printing, March 2010
Distributed by Simon & Schuster
1230 Avenue of the Americas
New York, NY 10020
Library of Congress Cataloging-in-Publication Data t/k
Printed in the United States of America

This book is dedicated to the memory of Jim Baen, who started Eric's career as an author and had faith in Kathy's career when she most needed it.

Gabe Tully was on detached duty in the Rocky Mountains Resistance camps when his Jao-issued com buzzed in his shirt pocket. A breeze rustled through the coin-shaped aspen leaves overhead as he silenced it quickly, hoping no one working nearby had heard. Even though Earth's Resistance was cooperating with the Jao invaders to fight the Ekhat—for now—many of his former comrades still resented him for apparently "selling out" by taking service under the Jao governor, Aille krinnu ava Pluthrak.

That hadn't exactly been his choice in the beginning, but there was no way to explain the situation to men and women who had never been exposed to Jao culture. They didn't understand that joining a Jao's service was more like taking an oath in a brotherhood. His loyalty was to this one particular Jao who didn't seem as bad as most.

And, of course, he wasn't going to point out to these rugged freedom fighters that, for all intents and purposes, they were enrolled in Earth's new human taif whether they liked it or not. The way he saw it, membership was a plus, guaranteeing them rights the Jao had previously denied, but until his Resistance brethren had seen the things Tully had seen and fought the battles he'd fought, there was no way they were going to understand.

Tully understood the old ways were forever altered. There was no going back. Mankind was living in a much more dangerous universe than any of them had ever credited. After the video record had come in from China two years ago—the smoking remnants of towns, forests blasted into cinders and mountains into slag—it was clear exactly what the Ekhat intended to do to Earth. If this alliance with the Jao could protect their world from another such attack, it deserved their allegiance, however grudging.

In order to talk privately, he slipped away from the hodgepodge of ramshackle cabins and tents that sheltered a good portion of what was left of America's free fighting force, then settled underneath a stone ledge. Bright morning light streamed in from the east. He braced his back against the sun-warmed rock and keyed the com's channel open. "Tully."

Tully scowled. There had never been any love lost between the two of them, for all that they'd watched each other's back during that "unpleasantness" two years ago when the Ekhat attacked Earth. And of course, Kralik, as head of the Jao's jinau troops, outranked him, always a sore point. "Yeah, I'm kinda busy."

"Aille wants you in Pascagoula on the double."

"I'm in the middle of negotiations with Willa Sawyer," Tully said, watching an eagle soar above the pass. "Can't this wait a few more days? If I hot-foot it back to Mississippi now, I'll have to start all over when I return, and these folks are not crazy about the whole idea of working with us in the first place."

"This is big," Kralik's deep voice said. He hesitated. "Real big, to judge by all the excitement it's stirred up. The Jao are scurrying about like ants who've had their hill kicked apart. Aille understands how important your work is, and he still wants you back on base—now."

Wind shifted through a stand of pines higher up on the mountain side, filling the air with their cool pungence. With fall just around the corner, change was in the air. The seasons turned early at this elevation and the steep pass up into the mountains would probably be snowed-in before he could return, isolating the settlement for the winter.

Tully sighed, then massaged the bridge of his nose. Goddammit. Four weeks of talks shot all to hell, just when that old she-badger Sawyer seemed on the brink of saying yes. But there was no wiggle room with the Jao. If one who outranked you said "jump," you didn't even get to ask "how far?" You just closed your eyes and leaped. They would tell you where you landed later—if and when it suited them.

He stared at the plastic com as though this were all its fault, then ran fingers through his wind-blown blond hair. "It's not the Ekhat, is it?" he asked with a stab of dread.

"Not allowed to say," Kralik said. "In fact, Aille hasn't even told me yet, but there's plenty of speculation around here. Everyone agrees that something big is brewing. Just pack up and head out. I'm sending a small courier ship to pick you up down by that old airport in Aspen."