Read The Cyber Chronicles - Book I: Queen of Arlin Online

The Cyber Chronicles - Book I: Queen of Arlin 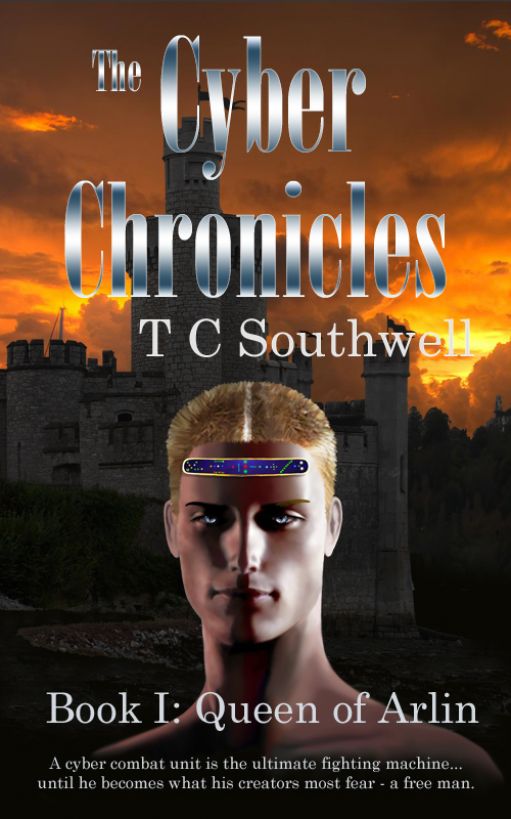 Book I: Queen
of Arlin

Thank you for
downloading this free e-book. You are welcome to share it with your
friends. This book may be reproduced, copied and distributed for
non-commercial purposes, provided the book remains in its complete
original form. If you enjoyed this book, please return to
Smashwords.com to discover other works by this author. Thank you
for your support.

"More monsters
have come from the Death Zone, Sire."

King Litham
Alrade looked up at his trusted advisor. Lines of weariness mapped
his parchment-pale skin, and steel grey brows drew together above
dark blue eyes that had lost their lustre. Shadows of pain lurked
in their depths, reflecting that which gnawed at his innards and
loosened his hold on life. The doctors had withdrawn from the
sickbed and stood in affronted unwillingness to admit their
failure.

King Alrade's
swift illness had taken all by surprise, wasting the flesh from his
powerful frame at an alarming speed and robbing him of his
strength. The King's eyes wandered over his long-time friend's
face, seeking an answer in his elderly features but finding none.
Despair flared in his eyes.

"What can I do
about it now, Pervor? All that I can, I have done. Did you meet the
wizard?"

The gaunt,
balding advisor nodded. "He agreed to help. He told me that he
would send a tool, some sort of magical device, and it will appear
in our dungeons when it is ready. Do you truly trust this man,
Sire? You leave the fate of your kingdom and your daughter in his
hands."

King Alrade
sighed and settled deeper into the soft cushions of his deathbed.
"What choice do I have, my friend? The gods have decided to take me
from this mortal plane, and none can gainsay them. Certainly not
that brood of incompetents that lurk in the shadows. I only wish I
could stay to see it through. Tassin does not deserve this burden
on her reign, she is too young." Anger brought blood to stain the
old King's cheeks for a moment before it drained away again. His
wheezing broke the hush.

"Tassin is
strong," Pervor soothed. "She comes from a long line of warrior
kings and queens. She will win."

The King shook
his head, closing his eyes as a stab of pain coursed through him.
"She is frailer than you think. Her mother was as fragile as a
flower, and as easily crushed. Why do you think she died birthing
Tassin, who was such a small baby? Tassin tries to be a warrior
princess, but she is too small, like her mother, her blows too
puny. Mandon, bless him, makes her feel good when she does her
sword training, but he tells me that she can hardly cleave a
butterfly in half."

Pervor pursed
pale lips and regarded the dying King. "But she has your blood in
her too, My King. She will be strong when she has to."

"She will try.
I pray that she does not kill herself in the process. Pervor, swear
to me."

The aged
advisor fell to one knee. "Anything, Sire, just name it."

"Protect her,
and if you cannot, since you are old, find a mighty warrior who
will. One who will stand beside her and kill her enemies when she
cannot. She will have troubles aplenty, and not merely the monsters
from the Death Zone that ravage our land. The kings will fight for
her hand, and none are truly good. Find someone. Be he mage or
warrior, prince or miracle worker. She will need him. Swear this to
me."

Pervor bowed
his head. "I swear, My King, upon my life and the lives of my
children, to do my utmost."

"Tell her of
the weapon as soon as she is Queen. Help her to use it, and defeat
the Death Zone. I leave her in your care."

Pervor nodded,
frowning as the King's breath rattled ominously, and one of the
healers who hovered nearby stepped closer to bend over him.

"Send for the
Princess," the doctor said.

The advisor
retreated into the shadows as a manservant ran out. Pervor gazed at
the King who lay shrunken and pale on the huge bed, the doctors
gathered around him like vultures about a corpse.

Princess Tassin
Alrade gazed down at her father's peaceful face, her throat tight
with grief. His eyes remained closed and his breath came in shallow
gasps. The bevy of doctors, advisors and servants who stood in the
shadows watched her stroke his brow, lined by years of worry. The
King was dying; everyone knew it. Soon she, a seventeen-year-old
girl, would be Queen of a vast and powerful land. Her father had
wed late in life, rejecting all offers until he had met the young,
butterfly child of an insignificant lord. A brief year of happiness
had ended with her mother's death a few days after Tassin's birth.
From her father she had inherited the Alrade black hair and blue
eyes, and from her mother's blood, her slight stature and fine
features.

Tassin choked
back her tears, sought his limp hand amongst the bed clothes and
gripped it. The King, his beard grizzled and his lips tinged with
blue, opened his eyes.

His gasping
breaths quieted. "Tassin, my child." His eyes roamed over her face,
lingering on the features that reminded him of his dead wife, her
gentle smile and soft eyes now filled with sorrow.

The hand she
held gripped hers weakly. "I am sorry, little one. Be happy,
Tassin. Do not let anyone take that from you. Trust Pervor, he will
guide you and take care of you. I go to join your mother."

"Papa!" Her
tears overflowed as King Litham's eyes closed, and his breath left
him in a long sigh. Tassin flung herself onto his chest and
embraced him, shuddering sobs racking her slender form. A sigh came
from the shadows where his retainers waited.

"The King is
dead, long live the Queen," a voice proclaimed.

There was a
rustle of rich cloth as the retainers knelt. A firm hand clasped
her shoulder.

"Come, Your
Majesty, he is dead." She did not recognise the voice, but allowed
herself to be tugged away, numb with misery, hardly noticing as she
was led to her room.

Her
ladies-in-waiting dressed her in a white satin gown, its bodice
covered with intricate patterns of seed pearls and its gossamer
sleeves sewn with tiny diamonds. Her silken tresses were teased
into glossy bangs and swept up into a regal coif sparkling with
jewelled pins and fine gold chains. Diamonds flashed on her
fingers, wrists and neck. Tear-drop pearls dripped from her
earlobes, and a diamond-studded silver mesh was pinned to the back
of her hair, falling like a rain-dewed cobweb around her neck. Her
ladies praised her beauty, but were forced to rub berry juice into
her cheeks and lips to give them some colour, reminding Tassin of a
lamb being prepared for slaughter.

The priests and
nobles awaited her in the long, banner-hung throne room with its
high roof and polished slate floor. Battle trophies, coats of arms
and old suits of armour told the tale of her ancestors' glory days.
The three rulers of the neighbouring kingdoms turned to rake her
with cold, calculating eyes when she swept in. They were here to
vie for her hand in marriage, and her extreme youth and beauty
clearly pleased them. Her father's last words echoed in her mind as
she was led towards the throne, hardly aware of the courtiers who
sank down in homage as she passed.

The ceremony
was a blur of droning speeches and tuneless hymns. She held the
things that were placed in her hands, not caring what they were,
and repeated the words that she was asked to, her mind still filled
with the image of her father's gaunt, tired face. As the cold
weight of the crown settled upon her brow, she vowed to obey her
father's last wish. The eyes of the three kings crawled over her
like loathsome slugs. Everywhere she looked, she met calculating
gazes, plotting, weighing, seeking her mettle. She raised her chin
in proud defiance of their judgement, and the scheming eyes slid
away with cunning glints. Even at her coronation, enemies
surrounded her. Her life was poised to plunge into a dark sea of
intrigue and plots, and the prospect terrified her.

Tassin gazed
across the darkening land as the sun's afterglow faded. The distant
forest grew gloomier with every passing minute, and she shivered,
wishing the strange wizard, Manutim, had not insisted that she meet
him there alone tonight. The forest, with its huge, twisted trees,
frightened her. Legends abounded of werewolves who dwelt in its
dark confines and emerged at night to seek human victims.

Turning away
from the dusky vista, Tassin gazed across the grey stone
battlements. The sentries' armour glinted in the light of newly
kindled torches. They stood like statues, their brutal faces blank,
but for all she knew they could have been the cook's cousins, since
there were so few of her trained soldiers left. Most had perished
over the last two months. She wondered how long it would take for
the last remnants of her once-great army to lose hope and flee
before they too were slaughtered on the battlefield. Deserters had
been fleeing the castle for days now, vanishing from their posts in
the dead of night.

Three months
had passed since her father's death, and she still missed him
terribly. She now ruled the largest and most beautiful of the five
kingdoms, and was the prey of the three unwed kings’ ambition to
rule Arlin. They had come courting, and Tassin shuddered as she
recalled their bungling attempts to impress her. Fat, bearded
Bardock, who smelt of wine and dogs. Old, widowed Grisson, thin and
lecherous, who sucked at his food with a toothless mouth. The
memory soured her stomach. All her hopes had rested upon the young,
handsome King Torrian, the only one she had even considered, until
she had found out that he was a rapist and woman beater.

The feral glint
in his eye had become obvious when she had been informed of his
true nature. Her principal lady-in-waiting, Royanne, had told her
tearfully, aware that she was dashing the young Queen's hopes for a
happy marriage. During his stay at Alrade Castle, Torrian had
attacked one of the serving maids, and his retinue had spread
surreptitious whispers of his appetites. The rumours were not
supposed to reach Tassin, but Royanne was an able spy, unearthing
anything potentially harmful to her monarch.

Hit and Run by James Hadley Chase
Shattered Grace (Fallen from Grace) by Raines, K Anne
The Coldest Winter: America and the Korean War by David Halberstam
Pennsylvania Patchwork by Kate Lloyd
New Pompeii by Daniel Godfrey
Seducing Celestine by Amarinda Jones
Lady Emily's Exotic Journey by Lillian Marek
Dead on Delivery by Eileen Rendahl
Love Me Like No Other by A. C. Arthur
Brought the Stars to You by J. E. Keep, M. Keep