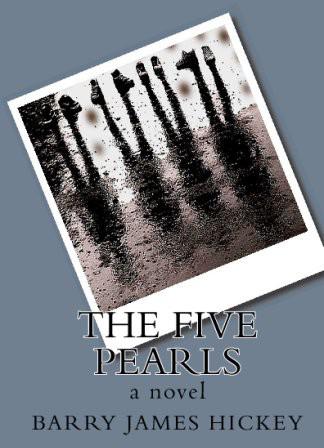 The Five Pearls belongs on the bookshelf next to The Outsiders, Holes, Catcher in the Rye, and To Sir With Love. A perfect read for teenagers and parents alike. Barry James Hickey's engagingly cinematic writing will make you laugh, cry and ponder. No child left behind in today's American education system? There are five this time. Hickey has created a truly memorable story with distinct characters carved from everyday life where everyone has a secret. With the help of a retired nurse, a dying man with a new identity, a terrible past and a hidden agenda changes the hearts, minds, and character of The Tadpoles; five angry, stubborn students forced into an after-school program. Barry James Hickey's world of disconnected quirky characters destroys the myth of the American melting pot and turns it into a salad bowl of mixed races growing up together with surprising and uplifting results. The Five Pearls leaves you begging for the story not to end.

A bright book on hope and caring.
Guy Tower (Howard, Colorado)
Barry James Hickey creates characters no one would at first sight, sympathize with, then imbues his characters with a magic formula, using acute observation of the human condition, sensitivity, honesty, imagination, love and hope. The result is a wonderful story, with timely revelations.

How the novel evolved:
In my last year as a high school English teacher, doctors were running tests to see if I had leukemia. Meanwhile, I had a handful of frustrated teenagers trying piece together their current and future lives. It was a brilliant summer for all of us and my initial idea for The Five Pearls was born. I constructed five angry kids, based on the hundreds I had the pleasure of knowing from the past few years and came up with my final tale.

- 1 This is a work of fiction. The names, characters, places, and incidents either are the product of the author’s imagination or are used fictitiously, and any resemblance to actual persons, living or dead, business establishments, events, or locales is entirely coincidental.

This book, or parts thereof, may not be reproduced transmitted, or stored in whole or in part by any means, including graphic, electronic, or mechanical without the express written consent of the author except in the case of brief quotations embodied in critical articles and reviews.

For contact information for the author, visit www.barryhickey.com
CHAPTER ONE

The tall and suntanned Superintendent walked with the freed prisoner towards the last gate to freedom. The prisoner toted his duffel bag. All that he owned was in it.

“Damned shame what the system can and can’t do, John.” “I can’t cry over spilled milk, Warden Rivers.”
“Well, if it was me, I’d sure as hell be taking it personal.

Locked up nearly fifteen years, then they cut you loose when the big bills start comin’. Board wouldn’t even let you in the damned prison hospice program since you were due for parole. My hands were tied. You know that?”

Rivers gestured with his meaty hand to a guard in a security shack. The gate in front of them buzzed and swung open automatically.

The prisoner waved goodbye to the man in uniform and continued with the Warden down a long ramp towards a parking lot. The big man was anxious for talk.

“Best I can do is that Mexico thing for you, John.” “I appreciate it, Warden. That little cut and dice will give me enough cash till the end game.”

superintendent admitted. “You should be proud of that.” “Still doesn’t negate the fact that I killed three people,” the
smaller man shrugged.
“A little advice, John?”
“Sure.”
The Warden stopped and faced him. “I know all about what
you intend to do. But don’t try to fix what’s broken. Not with the time you have left.” He studied John’s tired eyes. “If I was you, I’d be making my peace with my maker. No time to
play shepherd to the sheep.”
“And a little advice for you, Warden Rivers? You’re a
humane man…”
“Sure, John.”
“It’s time to hang up your spurs, too.”
The released prisoner moved on ahead of his former
keeper.
The Superintendent nodded to himself as he caught up
with a few big strides. “Damned prison system nowadays.
Nothing more than a money laundering scheme for big
business and politicians. Shipping and swapping inmates from
one state to the next. It’s all about maximizing revenues. I’m
nothin’ but a damned flesh merchant with a calculator. Maybe
you’re right.”
They arrived at the gravel parking lot. It was visitor’s day
but only a few cars were parked there.
“You got someone to pick you up?” the Superintendent
said.
“I don’t know anybody in Texas. Heck, I don’t know
anybody anywhere anymore.”
“Well, the bus into town comes on the hour.” The Warden
glanced up at the guard tower and awkwardly wiped his hands
on his pants legs. “Well, all right then,” he said. “So I guess
this is goodbye…” He offered up a handshake. “You’re a free
man now, John. Don’t die alone.”
John shook his hand. “I’ll try not to, Warden.”
He carried his duffel over to the bus stop and sat down on
a cool metal bench under a lean-to that was supposed to be a
respite from the blistering Texas sun in summer. But it was
long past summer now and the wind in the air tasted like dirty
chalk.
A big sign was screwed to the fence next to the bus stop;
words printed in big blood red letters:

DO NOT PICK UP HITCHIKERS The Superintendent turned and started back towards the prison. The big man’s hands were clenched tight and he shook his head angrily, talking to himself. “Man will never see fifty. Ain’t life a bitch sometimes…”

He looked at his watch and remembered that there was an execution to preside over tomorrow and that he’d have to make a string of calls. Warden Rivers was getting mighty tired of the thin line that existed between the keepers and the kept…

A week had passed for the freed man. Texas and prison were already a distant memory. He was in Mexico now, in a small dusty town across the border. His weeklong hospital visit had been a blur. Waiting for a taxi outside the battered stucco building, the concerned Mexican nurse leaned the American against a sign pole.

“You need more rest,” she declared.
“No time.”
The stout nurse lifted his shirt and examined the long gauze

bandage near his stomach, shaking her head. “Already your stitches leak. If you are not careful, infection will set in. Then it will spread, then you will die.”

The once-handsome American laughed and his long gray hair danced around his shoulders. He pulled the drawstring tight on his duffel bag.

“We’re all going to die someday, sister.”
“But not today?” The nurse begged with a soft smile. “Not today Conchita.”
She stuffed two pill containers inside the small opening of

his duffel bag. “Take one of each every four hours. One is for the pain, the other is for infection.”
“Thank you.”
The kind woman placed two more containers inside his jacket pocket. “These are for your other problem - the headaches, nausea, and seizures. I wrote the instructions in English.” Conchita smiled at him. “Nothing else then, Senor. I am sorry you did what you had to do.”
“That kidney was the only thing I owned that still worked on a daily basis.”
She smiled softly. “Goodbye, then.” The nurse waved to a passing cab. It made a U-turn in the street and pulled up alongside the curb. She opened the cab’s rear door and kissed the American on the cheek. “Vaya con Dios, John.”
“Go with God?” he chuckled. “That'll be the day.”
The American clumsily slid into the cab and waved goodbye with a weak hand.
The taxi meandered into the thick of traffic down the dusty irregular street and was gone.
The nurse angrily turned and faced the hospital. She spoke bitter words from experience. “I hate my job.”
Driving down the street, the cab driver shouted towards the back seat over loud music blaring from a portable radio on the dashboard.
“Adonde, Senor?”
“The bus station for the States,” said John.
“Where in America you go?”
“Colorado.”
“Ah! Colorado! A beautiful place! Why are you in Mexico?”
“Business.”
The cab hit a pothole in the dry dusty road and slammed the American into the right passenger door.
“You better pull over,” John said through gritted teeth.
“What did you say?” The driver studied his passenger in the rearview mirror.
“I said pull ove…”
The cab driver slammed on the brakes but it was too late. The stranger in the back seat had already vomited on the floor.

Two days later, an old bus arrived in Trinidad, Colorado. A dozen Hispanics, mostly men, stepped off and retrieved their bags and satchels from the undercarriage before the old bus pulled out of the depot.

John sat in the last row of the bus, finally able to stretch out. In Mexico, before he boarded his first of three buses, he bought a cane, magazines, food and water. His duffel bag was propped in the corner under the dark-tinted window. It made for an uncomfortable, lumpy pillow. There wasn’t much else in it. Just an old oblong shoe box carrying important papers, three pairs of pants, a few shirts and belts, two pairs of worn shoes, toiletries.

He’d been riding buses for two long days now. Even with pills to pop, he was in constant pain from his surgery. There were other complications, too. Night sweats, strange twitching convulsions, and ringing headaches so bad he wanted to tear his ears off. But he was used to the absurd pains. They started months ago.

There it is again!
He felt a new, stronger convulsion starting up. John tried to open the pill bottle, the one the nurse told him to take for just such a thing. But his hands were unsteady with the lid. The pills spilled on the floor of the growling, moving bus.
He glanced to his right. A small Mexican boy with giant brown eyes had been watching him from a seat across the aisle in front of him ever since Texas. The kid slid to the floor from his seat and carefully picked up the pills one at a time. He studied the older man with a strange curiosity as the American struggled ineptly with small convulsions. A minute passed before the shaking stopped. The small boy pulled the empty pill container from the man’s hand and refilled it with all the pills from the floor but one. This he offered up to the American’s lips. John took the pill and swallowed it. The boy found a bottle of drinking water on the seat, opened it and offered that to the American, too.
“Thank you,” said the man, sipping down the water. “What’s your name?”
“Jesus.” The small boy winked at him and returned to his seat next to his heavyset mother. She was fast asleep.
John smiled one last time at the boy before pulling himself up to the window. He stared towards the West. A pyramidshaped mountain loomed in the distance ahead of him. It glowed with a purple majesty from the half-risen sun’s rays in the east.
“It is so big!” He heard the boy say from his own seat across the aisle. “What is it?”
“Pikes Peak,” the American said. “America’s mountain.”
“I am going to be an American someday,” Jesus whispered firmly.
“You can take my spot when I leave,” John said.
“Where are you going?’ asked Jesus, eyes widening.
“Far, far away.”
“After America, I will visit you.”
“Okay.” His pleasant blue eyes twinkled as he smiled at the boy.