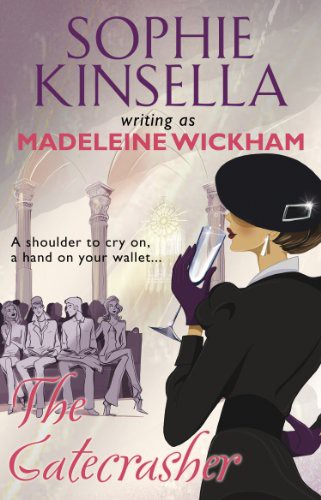 Praise for the bestselling novels of
MADELEINE WICKHAM

“Wickham serves up a healthy dose of good-natured witticisms mixed with biting retorts.”

“Wickham writes a witty tale that goes beyond mere gossip, fashion, and fun; she provides a wickedly insightful look at the choices women make between career, children, and relationships.”

“Wickham spins a delightful story . . . [She] does a bang-up job of creating believable characters . . . Surprises abound as the plot unfolds.”

“Sure to please her many fans and gain her new ones.”

“A rare breed of beach read that’s breezy but doesn’t wriggle out of difficult adult choices.”

“Kinsella fans will feel right at home . . . At this
Wedding
, prepare to laugh, and maybe get a little misty.”

“A bride’s impetuous past comes back to haunt her in this yummy confection by Wickham.”

This is a work of fiction. All of the characters, organizations, and events portrayed in this novel are either products of the author’s imagination or are used fictitiously.

First published in Great Britain by Black Swan, a division of Transworld Publishers

Excerpt from
The Wedding Girl
copyright © 2009 by Madeleine Wickham.

Excerpt from
Cocktails for Three
copyright © 2001 by Madeleine Wickham.

Fleur Daxeny wrinkled her nose. She bit her lip, and put her head on one side, and gazed at her reflection silently for a few seconds. Then she gave a gurgle of laughter.

“I still can’t decide,” she exclaimed. “They’re all fabulous.”

The saleswoman from Take Hat! exchanged weary glances with the nervous young hairdresser sitting on a gilt stool in the corner. The hairdresser had arrived at Fleur’s hotel suite half an hour ago and had been waiting to start ever since. The saleswoman was meanwhile beginning to wonder whether she was wasting her time completely.

“I love this one with the veil,” said Fleur suddenly, reaching for a tiny creation of black satin and wispy netting. “Isn’t it elegant?”

“Very elegant,” said the saleswoman. She hurried forward just in time to catch a black silk topper which Fleur was discarding onto the floor.

“Very,” echoed the hairdresser in the corner. Surreptitiously he glanced at his watch. He was supposed to be back down in the salon in forty minutes. Trevor wouldn’t
be pleased. Perhaps he should phone down to explain the situation. Perhaps . . .

“All right!” said Fleur. “I’ve decided.” She pushed up the veil and beamed around the room. “I’m going to wear this one today.”

“So if you could just pack the other five into boxes for me . . .” Fleur smiled mysteriously at her reflection and pulled the dark silk gauze down over her face again. The woman from Take Hat! gaped at her.

“You’re going to buy them all?”

“Of course I am. I simply can’t choose between them. They’re all too perfect.” Fleur turned to the hairdresser. “Now, my sweet. Can you come up with something special for my hair which will go under this hat?” The young man stared back at her and felt a dark pink colour begin to rise up his neck.

“If you could just put it all onto my hotel bill,” she was saying to the saleswoman. “That’s all right, isn’t it?”

“Perfectly all right, madam,” said the saleswoman eagerly. “As a guest of the hotel, you’re entitled to a fifteen per cent concession on all our prices.”

“Whatever,” said Fleur. She gave a little yawn. “As long as it can all go on the bill.”

“I’ll go and sort it out for you straight away.”

“Good,” said Fleur. As the saleswoman hurried out of the room, she turned and gave the young hairdresser a ravishing smile. “I’m all yours.”

Her voice was low and melodious and curiously accentless. To the hairdresser’s ears it was now also faintly mocking, and he flushed slightly as he came over to where Fleur was sitting. He stood behind her, gathered together the ends of her hair in one hand and let them fall down in a heavy, red-gold movement.

“Your hair’s in very good condition,” he said awkwardly.

“Isn’t it lovely?” said Fleur complacently. “I’ve always had good hair. And good skin, of course.” She tilted her head, pushed her hotel robe aside slightly, and rubbed her cheek tenderly against the pale, creamy skin of her shoulder. “How old would you say I was?” she added abruptly.

“I’m forty,” she said lazily. She closed her eyes. “Forty,” she repeated, as though meditating. “It makes you think, doesn’t it?”

The hairdresser stared back at her uncomfortably. He opened his mouth to speak, then closed it again. The truth was, he thought suddenly, that this incredible woman didn’t look any age. She seemed ageless, classless, indefinable. As he met her eyes he felt a thrill run through him; a dart-like conviction that this moment was somehow significant. His hands trembling slightly, he reached for her hair and let it run like slippery flames through his fingers.

“You look as old as you look,” he whispered huskily. “Numbers don’t come into it.”

“Sweet,” said Fleur dismissively. “Now, my pet, before
you start on my hair, how about ordering me a nice glass of champagne?”

The hairdresser’s fingers drooped in slight disappointment, and he went obediently over to the telephone. As he dialled, the door opened and the woman from Take Hat! came back in, carrying a pile of hat boxes. “Here we are,” she exclaimed breathlessly. “If you could just sign here . . .”

“A glass of champagne, please,” the hairdresser was saying. “Room 301.”

“I was wondering,” began the saleswoman cautiously to Fleur. “You’re quite sure that you want all six hats in black? We do have some other super colours this season.” She tapped her teeth thoughtfully. “There’s a lovely emerald green which would look stunning with your hair . . .”

An hour later, Fleur looked at herself in the mirror, smiled and nodded. She was dressed in a simple black suit which had been cut to fit her figure precisely. Her legs shimmered in sheer black stockings; her feet were unobtrusive in discreet black shoes. Her hair had been smoothed into an exemplary chignon, on which the little black hat sat to perfection.

The only hint of brightness about her figure was a glimpse of salmon-pink silk underneath her jacket. It was Fleur’s rule always to wear some colour no matter how sombre the outfit or the occasion. In a crowd of dispirited black suits, a tiny splash of salmon-pink would draw the eye unconsciously towards her. People would notice her
but wouldn’t be quite sure why. Which was just as she liked it.

Still watching her reflection, Fleur pulled the gauzy veil down over her face. The smug expression disappeared from her face, to be replaced by one of grave, inscrutable sadness. For a few moments she stared silently at herself. She picked up her black leather Osprey bag and held it soberly by her side. She nodded slowly a few times, noticing how the veil cast hazy mysterious shadows over her pale face.

Then, suddenly, the telephone rang, and she sprang back into life.

“Fleur, where have you been? I have tried to call you.” The heavy Greek voice was unmistakable. A frown of irritation creased Fleur’s face.

“Where are you going?”

“Why do you need to shop? I bought you clothes in Paris.”

“I know you did, darling. But I wanted to surprise you with something new for this evening.” Her voice rippled with convincing affection down the phone. “Something elegant, sexy . . .” As she spoke, she had a sudden inspiration. “And you know, Sakis,” she added carefully, “I was wondering whether it wouldn’t be a good idea to pay in cash, so that I get a good price. I can draw money out from the hotel, can’t I? On your account?”

“A certain amount. Up to ten thousand pounds, I think.”

“I won’t need
nearly
that much!” Her voice bubbled
over with amusement. “I only want one outfit! Five hundred maximum.”

“And when you have bought it you will return straight to the hotel.”

“There is no of course. This time, Fleur, you must not be late. Do you understand? You-must-not-be-late.” The words were barked out like a military order and Fleur flinched silently in annoyance. “It is quite clear. Leonidas will pick you up at three o’clock. The helicopter will leave at four o’clock. Our guests will arrive at seven o’clock. You must be ready to greet them. I do not want you to be late like last time. It was . . . it was unseemly. Are you listening? Fleur?”

Flaws And All by Winter, Nikki
The Fourth Crusade and the Sack of Constantinople by Jonathan Phillips
Luke's Surprise by Lavinia Lewis
All Over You by Sarah Mayberry
When Karma Comes To Call by Shyla Colt
The Last Word by A. L. Michael
Falconer and the Death of Kings by Ian Morson
The Magic Of Christmas by Bethany M. Sefchick
Protect and Serve Don't Need A Hero by Lena Austin
Chevon's Mate by April Zyon