Read The Ghost of Oak Online

The Ghost of Oak 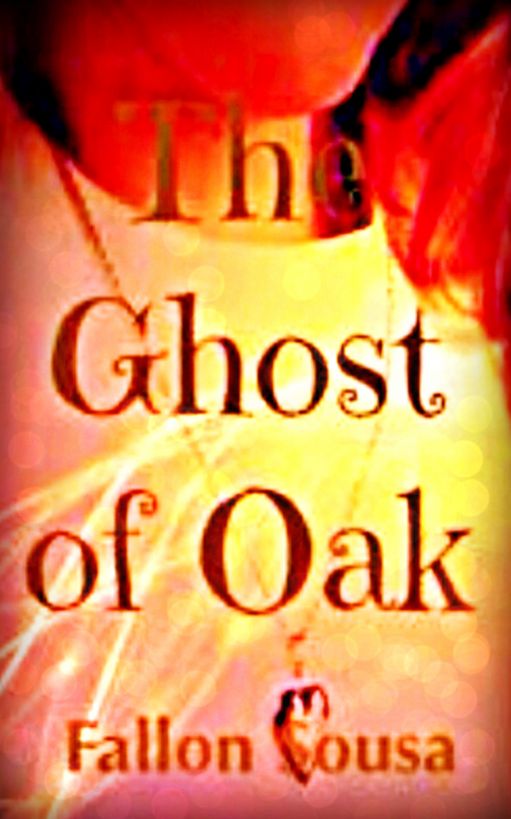 The Ghost of Oak

Published by Fallon Sousa at
Smashwords

The old woman clutched the gold
locket that she wore around her neck. It was in the shape of a
heart, and had an eagle emblem on it, which was her family's crest.
It had been passed down from generation to generation to generation
for nearly three hundred years, and had been given to her by her
dear mother when she was a small child, and she had not taken it
off ever since. Rumor had it that her great-great-grandmother, the
first person to own it (a "crotchety old witch," as the
neighborhood children had called her) had put a hex on it, cursing
those who didn't have a right to touch it to their doom. That would
never happen.

Ellen McDonald had already made it clear in her
will that she was to be buried with it. In addition to the curse,
the locket held supernatural powers. If a member of the McDonald
family clutched it for one solid minute, in their mind they would
see flashes of the next life-altering event that would take place
that day, and if the mind went blank, it meant that there wasn't
one. This was not one of those days. Today Ellen predicted
something all right, and that something-was her death. So, that was
it. Today would be the day that old Ellen would finally kick the
bucket, and be out of everyone's way. She was a lonely old woman
with no family or friends, and when people would see her taking a
stroll, her shawl wrapped around her, they would snicker, shoot
glances at her, and call her names.

She let go of the locket. Since her family was extremely
wealthy, thanks to her ancestors' little spells, the pure 24
karat-gold locket was worth millions of dollars. Ellen's dear
mother wished to sell it for extra money many times, but she simply
could not, due to the unbearable wrath of the curse. Even though
the family never took Carla's (Ellen's great-great grandmother's)
ways for granted nor did they ever show disrespect for her, they
all knew for sure that they never wanted the curse to be presented
upon any living creature, not even their worst
enemy.

Sadly, magic was no more in today's world and without the
supreme power in which Carla, their long deceased ancestor had once
been gifted, the curse could never be lifted. So, the only way to
hold back the curse was to keep the locket out of the reach of
curious unknowing hands. So, since her children were long dead,
(the locket had predicted their deaths as well as those of her
husband, parents, siblings, friends, and numerous others). She had
decided on being buried with the
not-so-good-luck-charm.

And with that, she began to feel a sharp pain in
her chest. She knew what was going to happen next. She knew that
her life was coming to a bitter end. She lay down upon her bed, as
her life flashed before her very eyes. She saw brief memories of
her infancy, her childhood, her youth, and her maidenhood, her
early marriage, her motherhood, memories as a widow, and finally
the most recent ones. Her head tilted off to the side of her
pillow, and her eyes fluttered shut. That was the moment that she
died. Her final hour-had passed. The last of the McDonald s was
gone. The family chain was broken, A legacy was unfulfilled, the
world's most powerful magic-was gone forever.

But as Ellen's departed soul, standing above her
bed walked toward the light, one problem remained. If Ellen had no
one, who would come upon her corpse? Would her carcass decompose
long before anyone found it? It-she thought of herself as nothing
but an inanimate object, now that she was a soul. She would not
stay behind in the living world, just to ease her woes. In being a
member of a magical family, she knew all too well that becoming a
poltergeist would not solve anything. She walked into the light
that was calling her, and left her body behind.

Her paper boy, Johnny Woods, cautiously
approached her house. But today after tossing the sacked newspaper
onto the old woman's lawn, he decided to sneak inside. He was a
curious boy, but until that horrifying day that he would remember
for as long as he lived, his fear had always overcome him,
restraining him from proceeding to engage in the little adventures
that he so longed for. Sadly, this time he would wish that his
fears had kept him far away from the silly things that he wished to
do.

He knocked on the front door foolishly, as if an
intruder would want to be detected. When no answer came, the child
crossed his fingers for good luck, and turned the doorknob
cautiously, just to see if it was locked. As it turns out, it
wasn't. He crept into the old gambrel, hoping to make it out alive
later that day. The house was spooky. The furniture was dusty, as
if never cleaned, and the curtains didn't match.

Old photo frames cluttered the walls, and the top
of the mantel. The house was also adorned with various peculiar
items, such as pentagrams and black candles and whatnot. And to top
off the boy's increasing terror, an old grandfather clock chimed,
marking the start of a new hour. More than anything, he wanted to
run away, and forget about Ellen McDonald, and her strange old
house, but now he was way too curious to do so. He wanted to check
out the rest of the first floor, but a nagging feeling in the pit
of his stomach that was telling him to go up the finely upholstered
cherry staircase.

So, one slow, cautious step, after another, he
did. At the top of the staircase, there was a bedroom. He peeked
inside. The furniture and drapery was just as drab and unsightly as
that of every other room. Just when he was about to leave, he
noticed something. There was an old, wrinkled up figure lying in
the bed, as still and motionless as a statue. He walked up to the
bedside, his heart racing and looked at the figure carefully. It
was Ellen, and she was dead. He wanted to scream, but remained
calm. He ran downstairs, and into the ugly old kitchen. For a
wealthy old woman, Ellen had no taste or really any nice things at
all.

He grabbed the old French phone by the wire, and dialed 9-1-1
in a sudden panic. It wasn't that he was ever fond of Ellen, or
ever cared about her, it was just that he had never came upon a
dead body before, or had to report finding one. A scratchy male
voice cracked on the other line.

"Listen, I'm a paper boy, and I
snuck into a creepy old crone's house. It was unlocked. I started
looking around, and I found her dead in her room. My name is Johnny
Woods, and I'm ten years old. I live in Little Compton, Rhode
Island, and the woman's address is 1534 Oak Street. Today is June
30, 1965. I'm really scared. Hurry!" The boy said in one
breath.

"Every thing's going to be all
right, boy. We'll get somebody over there as soon as we can, just
calm down." The man hung up.

Johnny did what he knew he should, and he went outside and
sat on the bottom porch step, waiting for the cops to get there. A
few minutes later they did, and they went upstairs, hauled out
Ellen's corpse on a gurney, and left. Johnny ran home to the
comforting arms of his mother and father. Mr. and Mrs. Woods
suggested that they attend the funeral, but poor little Johnny
couldn't bear it, so they chose not to attend, and sadly, neither
did any other living soul. So, Ellen's funeral was held privately,
and she was buried in the cemetery with a plain stone and wooden
coffin, bought with money from her estate.

Slightly over four decades later, a group of rowdy men
crowded a cheesy bar pondering the next crime they wanted to
commit.

"Why don't we go grave digging tonight?" suggested a
middle-aged biker, who was just dying to concoct something that
would prove his buddies chickens someday.

"No way dude!" most of the men said at
once.

"C'mon, what are you guys chicken?" he snorted,
quite pleased with himself.

"No!" they shouted, and finally agreed to do what their pal
said.

They squeezed into their beat-up old pickup truck, and did 90
miles per hour down to the local cemetery, blasting heavy metal on
the radio. When the crowd arrived at the cemetery, they jumped out
of the pickup, and onto the sidewalk. One by one, they climbed the
fence with ease, and began to search for a grave worth robbing.
Then clumsily, one of the men tripped on a grave. He looked at the
engraving on the stone. It read:

"Hey guys!" he yelled, addressing his friends. "My daddy told
me about that old lady when I was a kid. His little bro was the
dude who found her body. She was filthy rich.

"Good choice." replied the brave man who had suggested this
particular crime. "Looks like you're not so stupid after all." The
"stupid" one growled at him.

They grabbed their shovels and started digging. After about a
quarter hour, the ends of their rusty old garden shovels scraped at
a cheap wooden casket.

"Doesn't look like she was rich," One man commented, eying
his chum suspiciously.

They opened the coffin anyway, revealing a skeleton in ratty
black clothes. They had just thought that they were wrong about her
wealth, when they spotted the locket, grinning and already eager to
snatch it. The bravest one grabbed it fast, before anyone could
back out of the deal. He managed to get to the sidewalk, before he
keeled over, dead. The others stood behind, fixing up the crime
scene the best that they could.

When, they saw their friend/leader dead after
returning to the sidewalk, they scooped him up, and threw him into
the pickup, without noticing that the locket lay on the cement
behind them. And then and there at 1:30 am that day, they drove
off, never to be seen again. They probably fled to Mexico, or
Australia after that, but nobody really knew for sure. But one
thing was for sure. There would always be some kind of punishment
for those who chose to mess around with that
locket.

Jasmine was Katie Smith's best friend in all of
White Elementary School. Katie was ten, and in the fourth grade.
Most kids thought she was a sissy, due to her ongoing fears of
things that most ten-year-olds had long since got over. Any little
noise or shadow was enough for her imagination to go wild, and
she'd start freaking out. Once, when she was five, she got so
scared of a mall Santa Claus, that she started to cry and ran back
to her mother immediately.

Despite this, her friend "Jazz" as she preferred to be
called, always sided with her when someone made fun of her, and the
bullies always obeyed Jazz as if they were in a trance, since she
did come across kind of scary and tough, even though she had a
gentle heart and made a great best friend.

Jasmine laughed. "You sound so old when you talk
like that, Katie. Like a teenager. I hope you're not turning into a
popular girl! Are you? Hello, earth to Katie Marie Smith. Are you
with me, girl?" Jasmine clapped her hand over her mouth, and
apologized to Katie, who was still blushing tremendously from,
Jazz's comment about her starting to sound like a teenager. She
forced herself to stop and apologized to Jazz.