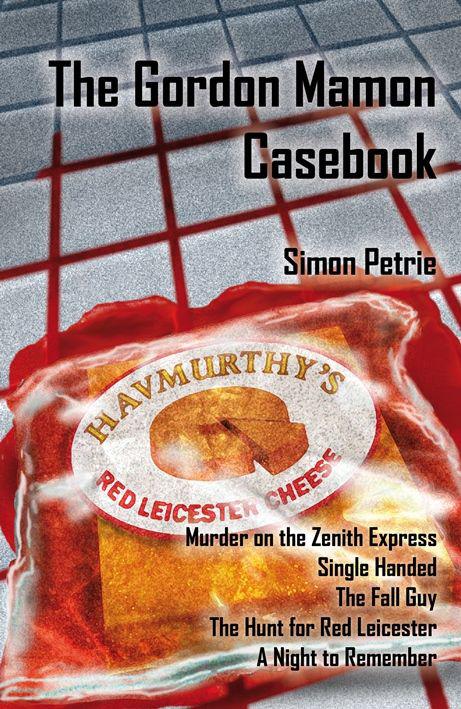 First published in Australia in 2012 by Peggy Bright Books

Please direct all enquiries to the publisher at: [email protected]

The right of Simon Petrie to be identified as the author of this work has been asserted in accordance with the
Copyright Amendment (Moral Rights) Act 2000
.

This work is copyright. Apart from any use as permitted under the
Copyright Act 1968
, no part may be reproduced, copied, scanned, stored in a retrieval system, recorded or transmitted in any form or by any means, without the prior written permission of the publisher.

Murder on the Zenith Express

Gordon Mamon was the lift operator in a hotel that didn’t have a lift.

Skyward was an organisation that had taken the concept of multi-tasking, and embraced it so firmly as to hold it in a virtual death-grip. As well as lift operator, Gordon’s job description encompassed first aid officer, complaints officer, janitor, dishwasher, room service, security officer and house detective. In his spare moments, which were few and far between, Gordon was also a crossword and trivia buff.

Gordon’s life was full of wardrobe changes, since he was a firm believer in always being dressed appropriately for the duty at hand. Right now he was wondering just where he’d left his ‘detective’ hat. He couldn’t recall having needed it before today.

He’d been called to the bathroom of a guest’s suite to attend to a problem of some errant plumbing, but his knock hadn’t been answered and he had had to override the door’s biometric scanners to let himself in. Now he pocketed his master glass eyeball and plastic thumb, and gazed around the bathroom. There was a problem, sure enough, but it didn’t look like the plumbing.

The suite’s occupant, Neil B. Formey, was dressed ready for a bath, but wasn’t going to be taking it anytime soon. Formey was clad only in a hotel bathtowel two sizes too small for him; and Formey was dead.

Gordon reviewed what he knew of Formey, which was reasonably superficial. He’d only met the man a few hours ago when the hotel was beginning its ascent. Formey was famous, an egotistical financier and ruthless industry heavyweight from the thriving colonies of Proxima Centauri, but had kept out of the public eye as much as possible. A generous tipper (Gordon had received a C-credit for showing Formey to his room), but you felt that he expected much for that tip, and that the service delivered was just the beginning: the hotel tip as Faustian bargain. A busy man, brash; a man with his fingers in a hundred pies. A man, too, who apparently always licked those fingers: he was a heavyweight in a literal as well as metaphoric sense.

Gordon gingerly adjusted the corpse’s bathtowel for the sake of modesty, and ran an autopsy scan of the body using his handheld. The scanner’s immediate diagnosis was ‘
dead
’, but hopefully it would come up with something more useful after it had completed its analysis. Still, that could take hours.

There was nothing to indicate how the guest had met his end. No visible marks on the body (though Gordon wasn’t game to lift that towel again just yet), no blood, no discarded weapons or misplaced items. Nevertheless, Gordon was reasonably sure it was murder. Men like Formey just didn’t die a natural death, they’d made too many enemies.

The Skyward Suites was a
distributed
hotel, partitioned into five hundred and fifty self-contained, airtight, independent units. Each unit alternated between a four-day ‘sessile’ cycle, when it was incorporated into the hivelike conglomerate of the Skytop Plaza (a mega-hotel in geostationary orbit which served as one of Earth’s principal gateways for interstellar travel and in-system space tourism); and a three-day ‘motile’ cycle when individual units were detached from the larger structure, slotted into the massive descending drive chains of the Plaza’s dedicated space elevator tower, and propelled on the long return journey to Earth’s surface. The Plaza was rated as a five-star hotel; the individual units lacked some of the diversity of facilities and services accessible to the parent body, but still rated four stars and a brown dwarf. Not bad for a glorified elevator cubicle.

Gordon was seated in Formey’s loungeroom. He’d sealed off the bathroom and its occupant, and had decided that the loungeroom was as good as any place to set up as his headquarters for the investigation. The surroundings, so close to the scene of the crime, might well yield some subliminal clue to the murder, if only through the suspects’ reactions. Besides, the chairs were much more comfortable than those in his own quarters.

He checked the guest register. Aside from Formey, there were three other guests: Hostij, O’Meara, and Taybill. He’d have to interview each of them in turn.

Frida Hostij was a noted police negotiator from the North New South Carolina police force on Mars. She was a shapely, athletic-looking brunette who was dressed well, in good quality off-the-rack garments: Gordon, who considered himself a snappy dresser, tended to notice details of other peoples’ outfits. Still, he couldn’t help thinking that the trim short-sleeve top was, for her, a mistake, since it gave prominence to an incompletely erased tattoo on her left forearm. Gordon couldn’t keep from stealing glances at her forearm while he questioned her, but the partially-eradicated tattoo remained stubbornly indecipherable.

Hostij had been assigned the suite next to Formey’s, and there was a connecting door between the rooms. This allocation, Gordon learnt, had not been accidental: the two were romantically involved. Furthermore, they’d apparently been talking together in Formey’s suite not half an hour before he’d met his end.

“—can’t
believe
it!” she complained. “We—we were going to start a new life, at Colony 337 around Barnard’s Star! He was going to leave his wives for me! I’ll—I’ll kill him!”

“No, I mean—whoever did this!” She breathed deeply, and steepled her hands atop the bridge of her nose before burying her face in her hands. Gordon waited a minute, and then offered a handkerchief which was disdainfully waved away. Hostij gave a healthy snort, replaced her hands in her lap, and lifted her gaze back to meet his. Her eyes were rimmed with red, and with stray moisture. “Thanks, I’m fine now,” she said. “It’s just such a
waste
!”

“Ms. Hostij,” Gordon asked. “My condolences: this must be a difficult time for you.” (She snorted again, more derisively this time.) “However, I need to ask. Do you have any evidence to support your assertion that Mr. Formey was going to leave all the trappings of a highly successful career, all his family ties, to embark on a … romantic adventure with you? In a colony which, from all the media reports, is—shall we say—rustic to say the least?”

“
Rustic?
” she snapped. “Listen, Mr. Mammoth, or whatever your name is! I don’t have what it takes for your amateur skepticism right now. I’m telling you straight. I … didn’t … kill … Neil! I could
never
do that!”

“Yes, you could,” Gordon protested, bristling at the ‘mammoth’ slur. “You’re trained to kill in the line of duty.”

She sighed, as if dealing with a child. “Yes, alright, I’m a
cop,
I’m trained-to-kill-in-the-line-of-duty. But that doesn’t mean I could kill Neil. I would
never
kill Neil! And no, I don’t have any
proof
that he was going to leave them, he just told me so. But he was telling the
truth
. And
I’m
telling the truth!” She sounded exasperated: Gordon supposed he could hardly blame her. She reached into her purse for a make-up mirror.

Gordon persisted. “Nonetheless, Ms. Hostij, you have to admit it doesn’t look good.”

“What doesn’t look good?” she asked, glancing up from the mirror, and back again.

“Your story, I mean. You might have just found out that, in fact, he wasn’t going to leave his wives for you. We have only your word for it that he didn’t tell you such a thing. You’re in an adjoining room, with ready access to his suite,
and
you’re trained in the use of lethal force. Means, motive, and opportunity. Plus, you don’t have an alibi.”

She clenched her fists. The look that she shot him could skin a small animal. “Arrrgh! But I DO have an alibi! Honestly, you don’t know the first thing about interrogation!” She took a calming breath. “Listen, I told you at the beginning! All the time I was in here talking to Neil, the other guy was in here too! He wouldn’t leave! Eventually I got called to reception to deal with some irregularity with my baggage. They other guy was still in here when I left.”

“Look, I don’t know what his flicking name is! The wrestler.”

She adopted the tone normally used by primary school teachers when talking to slow learners. “How many wrestlers do you have in this place?”

“Yes, I suppose you’re right. I should be able to find that out through my enquiries. Thank you.”

She stood to leave.

He called her back at the door. “Before you go, Ms. Hostij, do you mind telling me what the tattoo says? Said?”

One Ton O’Meara, the champion Mexican-Irish sumo wrestler, settled himself awkwardly into the chair across from Gordon. O’Meara, dressed in a short-sleeved open-necked leisure suit, appeared rather more liberally endowed with body hair than Gordon had expected for one of his profession. In other respects, however, he fitted the mould.

Gordon asked how he was connected to Formey.

“He’s my new manager,” O’Meara answered. “Was my new manager. Suppose I’m between managers at the moment.” O’Meara was surprisingly softly spoken for one of his stature. If Hostij was fiery, this one, Gordon surmised, was a gentle giant. Nevertheless, he may still have something to hide …

“Did you have any complaints?”

“Against Neil?” O’Meara paused. “No, look, Mr. Melon,”—Gordon winced—“he was fairer than fair to me. I’d come to see him, ‘cos I was unhappy about this gig—”

“The wrestling match at the Plaza.” (There was, Gordon recalled, some sort of combat-sport convention currently being held at the hotel towards which they were ascending.) “I was nervous about it, see, ‘cos I ain’t accustomed to zero-gee wrestling. Gravity’s my friend, you might say, and zero-gee, it ain’t my friend, not so much. I ain’t never done zero-gee wrestling, and I wanted to see with Neil if it was somethink I had to go through with. Stomach’s been getting a bit unsettled, even on this trip, as the gravity falls away.” O’Meara stifled a belch. “Excuse me.”

The Beginning: An eShort Prequel to the Bridge by Karen Kingsbury
The Land of Steady Habits: A Novel by Thompson, Ted
Life Drawing by Robin Black
Something Like This (Secrets) by Eileen Cruz Coleman
Beyond the Pale by Jak Koke
Mindfulness: An Eight-Week Plan for Finding Peace in a Frantic World by Williams, Mark, Penman, Danny
Fallen by James Somers
The Ark Sakura by Kōbō Abe
Tuesday Night Miracles by Kris Radish
Mistress of His Revenge (Bought by the Brazilian #1) by Chantelle Shaw