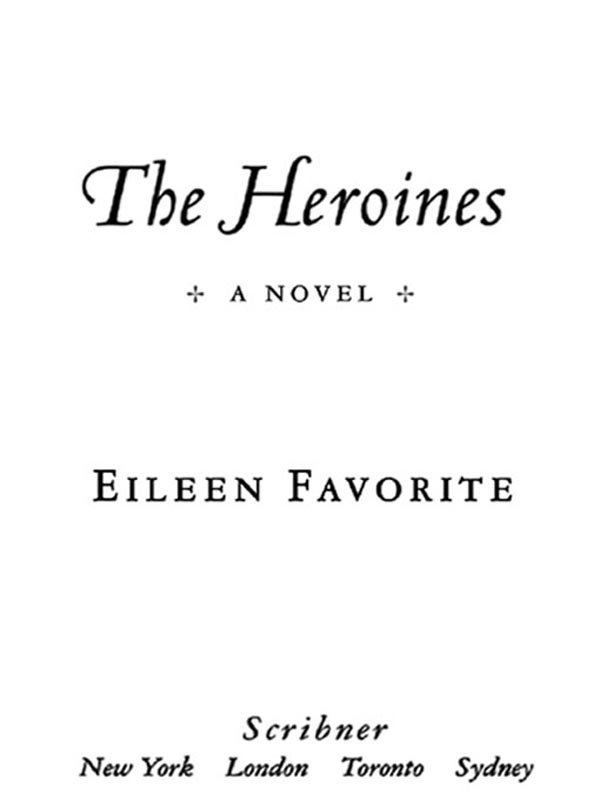 A Division of Simon & Schuster, Inc.

All rights reserved, including the right to reproduce this book or portions thereof in any form whatsoever. For information, address Scribner Subsidiary Rights Department, 1230 Avenue of the Americas, New York, NY 10020.

SCRIBNER
and design are trademarks of Macmillan Library Reference USA, Inc., used under license by Simon & Schuster, the publisher of this work.

The heroines : a novel / by Eileen Favorite.—1st Scribner hardcover ed.

Visit us on the World Wide Web:

For Martin and Lucille

It was undemocratic to compel characters to be uniformly good or bad or poor or rich. Each should be allowed a private life, self-determination, and a decent standard of living.

Part I
The Woods

Chapter 14
What would Scarlett do?

Chapter 18
Camping in the woods, Celtic-style
Talk of severed heads The odd sexual mores of
Celtic kings Musings on magic

Chapter 20
Albie appears Finally, a decent scheme Weaning
with weed I come clean to the right person (for once)

I
was so angry with Mother! I stormed down the prairie trail, flip-flops slapping my heels. Walking the mown path through the fifty-acre prairie was the only way to cool my head. Hell hath no fury like a pissed-off thirteen-year-old girl, especially a late bloomer, impatient for her body’s transformation. I was pigtailed, knobby-kneed, and flat-chested, thirteen, but physically more like ten.

Retreating to the woods was an act of rebellion. My mother had forbidden me to go there at night, so I could hardly wait to get through the prairie and reach the dark and leafy trails. The sun was dropping behind the trees, and the cicadas rattled like electric maracas. The prairie grasses and wildflowers reached my shoulders, the flora so thick even someone as furious as I wouldn’t dream of walking through it. I stuck to the path. Out on the prairie, the temperature dropped by five degrees, but it was still muggy. The noise from Route 41 sounded louder at night, cutting through the woods and across the power lines. A far-off motorcycle gunned it, probably passing another car. The engine whined, built up steam, then faded away. The sound of impatience. And escape. I could relate. An M-80 boomed. You heard them less frequently as the July days marched past the Fourth, but then one would boom on the twentieth. Boom! Somebody out there just couldn’t stop.

I couldn’t stop either. The scent of clover, the
chicka-chick
of some odd bird. Mother had gone too far with Deirdre this time, and I couldn’t stand it. I wished Deirdre would move on! Find some other bed-and-breakfast to colonize. Though
colonize
wouldn’t have been my word at thirteen. Back then, I probably would have said,
Move your butt down the road, girlie!
Constant coverage of the Watergate trials and Deirdre were hard rivals for Mother’s attention, which I craved in a classic pubescent way. I longed for motherly fussing precisely when my mother wouldn’t give it; and I cringed when she touched my hair or asked how I was doing when I had a perfectly marvelous funk going. Her timing always seemed to be off.

But tonight Mother had gone too far. The weeping Irish girl had moaned so much that another boarder had complained, so Mother had given her the farthest room away from him: my room. My sanctuary with the dormer windows and peerless cross-breezes! And Mother hadn’t even asked if I would mind. Even though three other rooms were empty, she volunteered my room, as if it were hers to give. I had spent the summer modifying the posters and pillows to my new tastes: my growing collection of Zeppelin albums, my purple beanbag chair. All bought with money from chores. Now I had to relinquish it to a pouty Irish girl who possessed everything I craved for myself: flowing blond hair, angelic skin, perfect curves. I would be stuck on a mat in the musty cupola with the dead horse-flies and cobwebs. Unlike some boarders who came for a week or two, Deirdre hadn’t specified her departure date. I could be trapped in the cupola for a month. I looked across the prairie at the fireflies flickering in the weeds. Maybe I’d camp in the woods.

Humidity blurred the peach half-moon. I usually took this walk earlier, but the weeping Deirdre had monopolized Mother, and I’d had to clean the whole kitchen myself. While I swept the remnants of our cook Gretta’s potato salad and sauerbraten into the waste pail, Mother and Deirdre sipped ginger ale in the dining room, and Deirdre blathered about some boyfriend of hers who died. Gretta had the evening off, and Mother wasn’t budging, so I had to rush to stack the plates and wipe clean the counters and sweep the great linoleum floor.

I swatted my arm and hurried through the woods toward the pond where a great blue heron I had named Horace lingered at sunset. I always tried to spot Horace before he detected me, but he took flight at the snap of a twig, unfolding his six-foot wingspan and gliding across the murky water. It was getting late. I had missed him tonight and it was no accident. It was Mother’s fault. And Deirdre’s too.

The residual buzz from a joint I’d smoked that afternoon with my neighbor Albie tilted my senses. Albert Gallagher was fifteen, a longtime nerd who’d recently morphed into a stoner. I wasn’t a particularly capable joint smoker, and after a couple tokes, I noticed how the birds suddenly seemed to be having genuine conversations. I could deal with the whole alternate reality of the sound of the creek, but gawky and pimpled Albie was another story. He smiled at me too widely, his braces glinting, and I saw the chemistry-set dork of yesteryear. He had to be pretty desperate to hang out with me. I was not one of those thirteen-going-on-twenty-two type of girls. But I was grateful for his companionship in the summertime especially, and Mother hadn’t really acknowledged that he wasn’t the innocent boy he used to be. Her vigilance had waned precisely when it should have sharpened. She knew that Albie and I “took hikes” in the afternoons, but she had no clue about my nighttime excursions alone in the woods.

The woods at night had always been a forbidden zone, and up until a few months before, I’d always steered clear of them after dark. Mother never said precisely why I shouldn’t go into them, and as my irritability with her increased, so did my desire to venture farther into the woods. I was growing beyond Mother’s constant surveillance, and with every nightly walk through the woods that passed without incident, I became emboldened, venturing farther and farther into the dark.

A mosquito whined in my ear, and I swatted it, first calmly, then spastically. Between the black branches the sky was gray. I ran across a short extension bridge, making the chains and planks rattle like hell, then I flew into another small prairie. The sudden appearance of a Tudor mansion shifted everything. At this point in my daily stroll I always slowed down. I trailed my fingers along the flowers, suddenly elegant, suddenly cool. I pulled the rubber bands out of my hair and let my curly red hair hang. I imagined a handsome hero, half hidden by a velvet curtain, watching my pensive walk through the prairie and asking himself,
Who might that creature be?
I envisioned a future where every night I descended a spiral staircase, a butler handed me a champagne flute, and my dashing husband and I tangoed across the living room. Back then, I had no doubt that my life would have a happy ending.

After the second prairie, I wound up back in the dark woods. It was later, and therefore darker than I’d ever seen before. I turned onto a bridle path and heard something scamper through the fallen leaves. The cicadas’ rattle grew louder, then suddenly stopped, as if warning me. A flame of fear blazed through my body; an animal, evil men, something was lurking and watching me from the dark corners of the woods. Two acorns thunked to the ground. Then I heard beating hooves behind me. I jumped off the path and pushed far into the brambles, swearing that I would never disobey my mother again. The scratchy, moist brush felt like a giant, thorny spider web, and mosquitoes immediately started to feast on my exposed skin. I turned back to look at the path.

I saw the silhouette of a man with billowing hair riding a horse at full gallop. Wood chips flew into the air behind him. In one hand he held the bridle, and in the other a flaming torch of such orange fire, I could scarcely believe it was earthly. I squeezed my eyes shut and pressed against a tree trunk, praying he wouldn’t see me, and wondering if this was why Mother had warned me to avoid the woods at night.

The horse skidded to a halt, and he waved the torch into the trees, turning them from black to flickering gold. My fingers trembled, and it took every ounce of strength not to wet my pants. He held the torch high, next to his face, and I saw his muttonchop side-whiskers, his thick beard. He peered down his long, sharp nose, then tilted the torch so it shone in my face. I crossed my legs and hugged myself.

“Where is Deirdre?” he shouted.

It suddenly dawned on me that this girl I’d been fighting with and hating and wishing would go away was a genuine Heroine. Boring Deirdre was one of them; even Mother hadn’t guessed. Never before had a man leapt from the pages of a book to recapture a Heroine. Deirdre was so depressed—crying all the time and monopolizing Mother’s attention—she must have come from some awful romance. Only a cheap book would have binding too weak to hold back a stereotype like this guy. All of this flashed through my mind while my body trembled with terror. For, whatever the plot line, however base the literary merit, this guy and his torch were close enough to set the tree on fire.

Working Girls by Katt
Andrea Frazer - Holmes and Garden 01 - The Curious Case of the Black Swan Song by Andrea Frazer
Nothing Is Impossible by Christopher Reeve
Reap the Wind by Karen Chance
Snake Oil: How Fracking's False Promise of Plenty Imperils Our Future by Heinberg, Richard
Pit of Vipers (Sons of Kings Book 2) by Millie Thom
Editor's Choice Volume I - Slow summer Kisses, Kilts & kraken, Negotiating point by Stacey Shannon, Spencer Pape Cindy, Giordano Adrienne
Boy on the Bridge by Natalie Standiford
To Save a Son by Brian Freemantle
Going the Distance by Meg Maguire