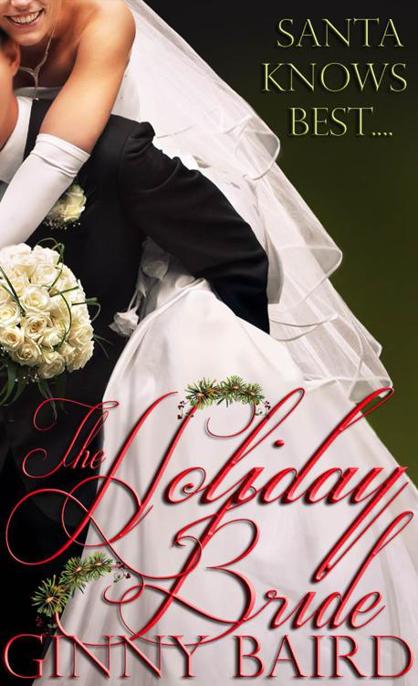 This ebook is licensed for your personal enjoyment only. This
ebook may not be resold or given away to other people. If you would like to
share this book with another person, please purchase an additional copy for
each recipient, unless this book is a participant in a qualified lending
program. Thank you for respecting the hard work of this author. To obtain
permission to export portions of the text, please contact the author at
[email protected]

Characters in this book are fiction and figments of the
author’s imagination.

Lucy hoisted her waitressing tray high and snaked through
the crowd at the packed diner. Paper Christmas decorations plastered the walls
and plastic holly was draped from the counter to the floor. Customers hunkered
forward over steaming cups of coffee and generous wedges of pie, as their heavy
coats overburdened hooks by the door. Lucy spied a couple across the way
snuggled giddily together on one side of a booth. Suddenly, the man involved
slid from his seat and dropped to one knee. Lucy paused in her tracks, her
heart thumping below the loud chatter. Though she couldn’t hear his words, his
intent was clear as he pulled a ring box from his pocket and took his
companion’s hand.

“Hey! Watch it, will ya?” Belle shouted, nearly crashing
into her. Belle had worked here forever, and her years of experience were
etched in her face.

Lucy lowered her tray, steadying it in her grip. “I’m sorry,
Belle. I didn’t see you coming.”

Belle’s eyes fell on the happy couple across the room, both
now standing and engaged in a joyful embrace. “Maybe if you kept your eyes on
your
customers, instead of mine, you’d
be more aware.”

Lucy sighed, her gaze skimming the tiny solitaire on her
left hand. It was hard not to think of Mitch and make a comparison. He hadn’t
even bothered to ask her officially. Instead, he’d just shrugged and said,
Well, you know what this means,
handing
over the ring. “I’ll try to be more careful.”

“You just do that,” Belle said, raising her own tray and
stepping past her.

Lucy swallowed hard, collecting herself. Though Belle came
off as gruff, she wasn’t all bad. Everyone here was cranky by now. They’d been
working like crazy all season long. Here it was Christmas Eve, and business
hadn’t let up one bit.

Lucy adjusted the silly Santa hat that Gus had forced her to
wear and pasted a smile on her face. She’d been on her feet for ten hours and
every one of her muscles ached. One of these days, she was going to get a
better job, one that allowed her to sit once in a while. From the looks of this
crowd, she thought, trudging through the sea of elbows and clattering dishes
getting tossed in bus buckets, that day wouldn’t be anytime soon.

On the other side of town, William Kinkaid stood by the
snowy window as his five-year-old daughter said her prayers. Springy chestnut
curls spilled forth as she bent her head, fingers interlaced. “God bless Daddy
and Justin, and Mommy in heaven...”

William felt the familiar ache in his chest, just as he did
every time the kids mentioned Karen. It wasn’t that he didn’t want them to
remember her. Maybe it was more that it was hard for him to remember her
himself.

“Okay, pumpkin,” he said fondly as she finished up. “It’s
into bed with you.”

Carmella hopped into bed and scooted down under the covers.
“Will Santa really bring me what I asked for?” she asked, looking at him
trustfully with big dark eyes.

“What did you ask for, sweetheart?”

“Santa’s not going to bring you
that
,
fuzz brain,”
Justin called from the doorway. William turned to find his twelve-year-old son
standing in the threshold.

“Be nice, Justin. And you go to bed, too. Or else, Santa
won’t bring you what you asked for either.”

Justin shrugged and strode away, his shirttails hanging
around the slouchy jeans that draped loosely on his lanky frame.

William returned his attention to Carmella, still waiting on
his answer. “Of course, sweetheart. You bet. Santa will do everything in his
power to bring you what you want.”

Carmella grinned, settling her head on her pillow. Something
crackled underneath.

“Carmella?” William asked, leaning forward to check and see
where the sound had come from.

Carmella flipped over and hugged her pillow. “It’s all
right, Daddy. You don’t need to see.”

He studied her, stroking his chin. “Why don’t I?”

“Because it will only make you sad.”

William steadied his emotions, thinking his precocious
little girl always had a way to read him. At times, it seemed she was five
going on thirty-five. Maybe that was because she spent most of her time around
much older folks.

“Your old man’s pretty tough, you know.” He extended a hand,
expecting her to turn over her hidden stash. How bad could it be? A handful of
pilfered candy canes? William resisted a chuckle, maintaining his stern daddy
pose.

Reluctantly, Carmella pulled a stack of papers from under
her pillow. William was stunned to see they were advertisements, torn from
catalogues and magazines. “What’s this, pumpkin?” he asked, fanning through
them. There were pictures of families, and mothers with daughters, all dressed
in the finest fare.

Carmella blinked, then said urgently. “I was looking at
clothes, Daddy! Girls like fashion!”

William stroked his chin, and eyed her suspiciously. “So
I’ve heard...” Something about this didn’t add up. He didn’t think pressure was
that keen to keep up with labels in kindergarten. Although his mom had
repeatedly warned him:
You can’t have
those children walking around like ruffians, William. For heaven’s sakes, buy
them some decent clothes.
That’s where all the catalogues had come from.
They were entirely his mom’s idea. Though William didn’t believe his kids
looked
that
bad. He basically let
them wear what they wanted, and always shopped at the upscale malls. “Well, if
it’s fashion you’re after, we can hit the stores the moment they reopen after
Christmas.”

“All right,” she said with a big, bright smile.

William kissed her on the head and said nighty-night, still
feeling as if something were amiss. He’d really thought she’d wanted that
enormous white teddy bear she’d already named Cubby. Hadn’t she ogled it each
time they’d passed the window of that store?

He switched off the light, as she snuggled contentedly under
the covers. “I know I’m going to get it. I just
know.
”

“And I’m sure you will, pumpkin,” he said, smiling softly.

William turned and ambled toward the door with a heavy
heart. He couldn’t stand to disappoint his daughter. He hoped to goodness he’d
gotten this Christmas right.

Lucy turned in a hurry, nearly crashing into Belle again.
“Watch it!” the older woman shouted, clearly agitated. Even her patience was
wearing thin, and Belle was long on patience. Lucy quickly backed up, but not
in time to avoid splashing two new coffees down the front of her uniform.
This great, just super,
she thought, on
the verge of tears. Her last customer had stiffed her a tip, all on account of
some burnt toast that she’d had nothing to do with. And now,
this.

“Say, Luce!” the kindly older cook called from the griddle.
“Why don’t you call it a night? You’ve worked two hours over already!”

Belle offered to hold her tray as she dabbed her apron with
a rag. “But this place is packed!” she told Gus, her voice cracking. Lucy hated
that her tone betrayed her. She was only thirty-one and was supposed to be
tough. At least as tough as old Belle here. She thanked the other waitress and
took back her tray.

“Packed or no, it will go on without ya. Now, scat! Consider
it an order.” He motioned to Belle to take Lucy’s tray back and Belle sighed
with resignation.

“Sure, yeah. You go ahead,” she said, accepting the mess.
“Least you’ve got a life waiting on ya.”

Lucy gratefully took an empty stool near the register,
feeling her tension ease. She hadn’t even realized how hungry she was until Gus
set the big stack of pancakes before her. “Fresh blueberry. Your favorite.”

“What would I do without you?”

He poured her a glass of milk as she lifted her fork and
waited.

“Oh no you don’t...” he joked, “you’re not dragging me into
that disgusting habit of yours.”

He pulled a bottle of chocolate syrup from the fridge and
set it on the counter with a thunk.

“There really
is
a
Santa Claus,” Lucy said, greedily uncapping the bottle and pouring. Before she
could ask, Gus had produced a can of whipped cream and spritzed a sweeping
circle onto her chocolate-covered flapjacks.

“Yeah, and if he’s watching, the old guy is sick to his
stomach.”

“It’s good,” Lucy said, digging in. “You ought to try it.”
The blueberry confection coated in chocolaty whipped cream melted in her mouth
like a warm bite of heaven. “Mmm. Delicious.”

“Thanks, but I give Pepto-Bismol enough of a workout.”

“You act like I’m the only person on the planet who eats
this.”

He studied her with a mixture of affection and amusement.
“That, sweetheart, is because you are.”

Her gaze trailed to the ancient tube television mounted in
the corner. An old black-and-white rerun from one of her favorite
nineteen-fifties shows was playing, the sort with the ideal intact family and
happy mom and dad. “If only real life were like that.”

“Yeah, but life ain’t no TV show. Perfection like that only
exists in—”

“The Classics Channel is full of them. Maybe you should
watch it less, and live a little more.”

“So, where’s the lucky fellow tonight?”

“Socking away the dough for that love nest of yours?”

“I guess,” she said, knowing she sounded less than
convincing.

“Somehow you don’t sound so excited.”

Her gaze panned back to the television. “Like you said,
perfection only exists in fairy tales—and on the Classics Channel.”

Gus cleared her empty plate. “Sometimes you’ve just got to
take what life serves you up. Even if it gives you indigestion.”

“Thanks, Gus,” she said with a weary smile. She stood and
grabbed her coat off a nearby rack.

“Any time, kid. You have a Merry Christmas now.”

The moment Lucy stepped onto the street, a frigid blast of
air hit her smack in the face. She bundled her scarf around her head and neck
and trudged down the street through the blinding snow. What had started as
light drifts had turned into a heavy sludge that dropped from the sky in icy
strips. At least she and Mitch had plans for tonight and she could look forward
to a cozy evening indoors. While Mitch wasn’t much on romance, he’d promised
for weeks that tonight would be special. As soon as her shift ended, he’d be
taking off from work as well, so just the two of them could spend the time
together they so badly deserved.

Lucy was glad to see the lights from Mitch’s real estate
office burning brightly up ahead. He was always the last one working, though he
maintained it was for a cause.

Lucy pressed through the heavy glass door, enveloped in a
swirl of snow and sending its door chime tinkling. Whistling winds howled as
she pushed the door shut.

Mitch didn’t even look up.

Lucy strode to where he sat and set her gloved hands on his
desk, palms down on either side of his laptop. “Um-hum,” she said, leaning
forward and hoping to get his attention.

Mitch looked up with a start, and removed the pen clenched
in his teeth. “Sweet Merry Christmas, Luce,” he said, studying the flakes stuck
to her honey-blond hair. “You look like a blasted snow bunny!”

“That’s because I
am
a blasted snow bunny. Haven’t you even looked outdoors? It’s really coming down
out there.”