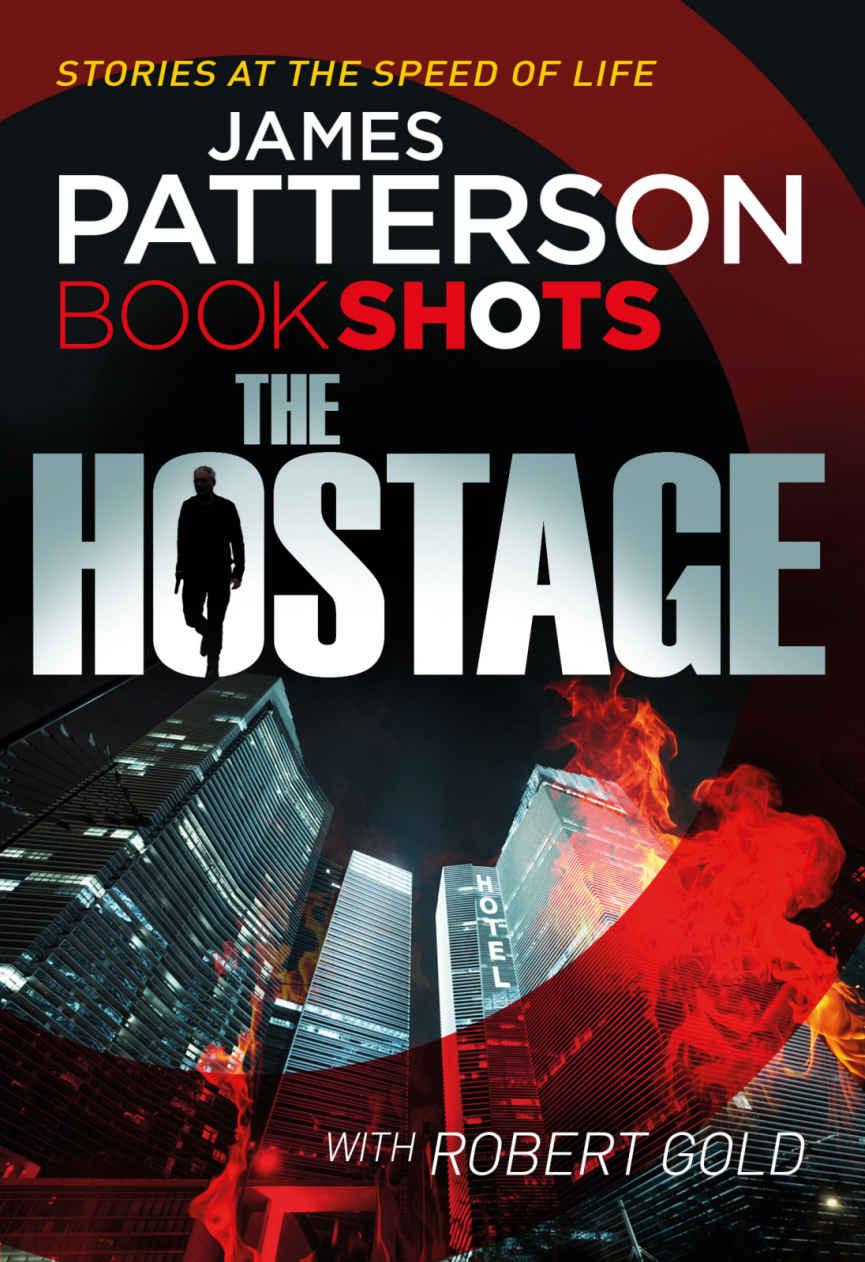 The grand opening of the world’s most exclusive hotel: forty floors of breathtaking luxury.

VIPs gather in London for the ultimate preview. But one uninvited guest plans to make this a day the city will never forget.

Global Head of Security, Jon Roscoe, confronts a killer with a deadly timetable.

JAMES PATTERSON
is one of the best-known and biggest-selling writers of all time. His books have sold in excess of 300 million copies worldwide and he has been the most borrowed author in UK libraries for the past nine years in a row. He is the author of some of the most popular series of the past two decades – the Alex Cross, Women’s Murder Club, Detective Michael Bennett and Private novels – and he has written many other number one bestsellers including romance novels and stand-alone thrillers.

James is passionate about encouraging children to read. Inspired by his own son who was a reluctant reader, he also writes a range of books for young readers including the Middle School, I Funny, Treasure Hunters, House of Robots, Confessions and Maximum Ride series. James is the proud sponsor of the World Book Day Award and has donated millions in grants to independent bookshops. He lives in Florida with his wife and son.

STORIES AT THE SPEED OF LIFE

What you are holding in your hands right now is no ordinary book, it’s a BookShot.

BookShots are page-turning stories by James Patterson and other writers that can be read in one sitting.

Each and every one is fast-paced, 100% story-driven; a shot of pure entertainment guaranteed to satisfy.

Everything was exactly as he’d said it would be.

Silently, he climbed the grand staircase, turning to his right when he reached its elegant summit.

He looked down the wide hallway.

The night light was on outside the boy’s bedroom, as he’d been told it would be. He crept down the corridor and stood outside the dimly lit room. The door was decorated with the boy’s own colourful drawings.

Inside, he could hear the child’s gentle breathing. His anticipation grew and his heart beat faster. For a moment he froze, until his adrenaline pumped again and he stepped forward into the room.

There was no going back.

In one rapid movement, he scooped up the boy along with his soft, warm comforter. A second later he was back in the hallway, holding the boy and walking quickly towards the stairs.

Did he hear a noise? He quickened his pace.

Three steps from the foot of the stairs, the boy stirred.

He stopped. The boy stretched up an arm, turning his body, before almost immediately settling into a deep sleep once again.

A voice at the foot of the stairs told him to hurry. A flashlight pointed the way, down the hall and into the kitchen. Both men walked quickly. He followed the light through the kitchen, out of the back door of the house and into the pitch black of the night.

The late-winter cold hit him as he entered the garden and he instinctively wrapped the boy’s comforter more tightly around his small, vulnerable body. Exactly as he’d been promised, none of the security lights were activated.

The flashlight pointed his way across the grass, through the shrubbery and onto the gravel track at the back of the house. As soon as he arrived, the waiting BMW opened its trunk and he stepped forward to lay the boy inside.

The boy was awake.

For the first time he panicked and clumsily bundled him into the dark space. He slammed the lid shut as the boy cried out for his mother.

Both men jumped into the rear seat of the car. The driver fired the engine, hit the accelerator hard and the car disappeared into the dark London night.

Welcome, friends and honoured guests, to the brand-new Tribeca Luxury Hotel, here in the heart of the world-famous Mayfair district of London. Thirty years ago, in conjunction with my esteemed business partner, Oscar Miller, I opened the very first Tribeca Luxury Hotel in New York City. My aim today remains exactly as it was those thirty years ago – to deliver the ultimate in indulgence and service, set in the most opulent and tranquil surroundings.

When we opened our very first hotel, we placed our guests and the service we provided them at the very heart of everything we did. I am proud to say across our twenty-seven luxury hotels in operation around the world today, and of course in this, our twenty-eighth, that personal service remains. Every guest is treated as an individual and welcomed every time they visit as if they are returning to their very own home – the most luxurious home in the world.

In three days’ time I will fulfil a lifelong ambition of opening a luxury hotel in Mayfair. For the very first time, we are bringing our unparalleled levels of exclusive accommodation, opulence and pure indulgence to the people of London and its international visitors. We take delight in offering our guests incomparable levels of comfort, consideration and security and our brand-new forty floors of palatial rooms are our finest demonstration of this yet.

I am honoured you are able to join us today at the exclusive preview of what I believe is the finest hotel in the world. Each one of you is my personal guest and I could not be more thrilled to welcome you to the new home of luxury in London, the Tribeca Hotel.

Browsing through the magazine, guests would find a feature on each of the group’s luxury hotels located around the world, from New York to Paris, Singapore to Beijing. But it went without saying the greatest prominence was given to this brand-new London hotel. Gatefold photographs captured the beauty of the interior and the amazing accommodation available to the richest and most famous in the world.

Stanley was aware years of preparation had gone into this day. Every exclusive suite individually styled, every room its own unique furniture, selected and purchased by the world’s most renowned interior designers. Flowers adorned the hotel, with fresh bouquets in every room. Private chefs had been appointed to every suite and individual butlers would serve every treasured guest. On the fortieth floor an oasis of calm had been created with an infinity pool offering commanding views across London and into the neighbouring royal palace gardens. No expense had been spared in preparation for the opening of the new hotel. Everyone in London was talking about it and nobody wanted to miss out.

Before it even opened its doors, the hotel was fully booked for the next two years. Fully booked – unless you were the President of the United States, a member of the royal family or a superstar of international fame. For them, Tribeca Luxury Hotels prided itself on always having a suite available.

As the assistant to the Global Head of Security for the luxury hotel group, Stanley was waiting by the express glass elevator to accompany Jackson Harlington, his family and his business partner, Oscar Miller, across the marbled lobby of the hotel to its majestic new front entrance. There, Harlington and Miller would throw open the doors and invite inside the world’s press, as they had at the grand opening of every single Tribeca Luxury Hotel for the past thirty years.

Stanley never failed to be amazed by each Tribeca hotel he visited around the world. Every one of them offered a higher level of luxury than the last. For Stanley, the hotels were beyond his wildest dreams and he appreciated every night he got to stay in one of the rooms – even if it was in a room reserved for staff guests.

Being present at the opening of a hotel in his home town made him feel particularly proud. He knew the London hotel was certain to be an enormous success and was delighted to be playing his small part in it. He looked out across the lobby, through its vast glass frontage, at the gathering crowd standing on the front lawns. Hearing the string quartet play, he watched as guests reached for their glasses of vintage champagne and foie gras canapés. For a moment he felt a slight pang of jealousy but contented himself with the thought of the freshly baked chocolate muffins being delivered to the kitchen later in the morning.

But as he closely watched events on the front lawn, Stanley had failed to notice that the express elevator had journeyed from the twenty-fifth to the thirty-eighth floor.

With a ski mask pulled tightly down across his face, an uninvited guest was dragging his petrified hostage down the hall on the thirty-eighth floor towards the Presidential Suite. The hostage had been pistol-whipped by his captor and was drifting in and out of consciousness. As the captor clicked open the door to the lavish suite, his hostage began to stir and became aware of his surroundings.

His hostage’s arms were tied at his wrists and his legs bound at his ankles. He threw the man face down onto the suite’s super king bed, made up with the world’s finest Egyptian cotton sheets. The hostage struggled to try to turn himself over. But as he rolled himself breathlessly onto his side, he was greeted by the sight of his captor standing over him. Picking up a heavy-duty rope from beside the bed, he was tying a hangman’s noose.

Panic flooded across his body. Trapped and tied, he was physically defenceless. He knew his only hope was to talk to his captor.

‘Tell me what you want. If it’s money I will get whatever you ask for. I’m a wealthy man. I can get you anything. Absolutely anything. Just tell me what it is you want.’

In silence the captor continued to tie the noose.

Fat by Sara Wylde
The Visitor by Boris TZAPRENKO
Eagles of the Third Reich: Men of the Luftwaffe in WWII (Stackpole Military History Series) by Mitcham, Samuel W.
Love in Infant Monkeys by Lydia Millet
Close Case by Alafair Burke
Pride by William Wharton
Specky Magee by Felice Arena
After by Marita Golden
El testigo mudo by Agatha Christie
The Girl in the Blue Beret by Bobbie Ann Mason