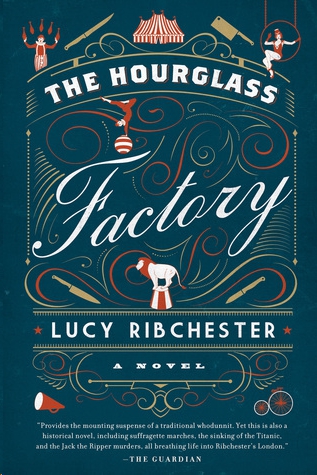 Lucy Ribchester was born in Edinburgh in 1982. She studied English at the University of St Andrews and Shakespearean Studies at Kings College London. In 2013 she received a
Scottish Book Trust New Writers Award for the opening chapters of
The Hourglass Factory
. Her short fiction has been published in journals in the UK and US, and she writes about dance and
circus for several magazines and websites including
The List
,
Fest
and
Dance Tabs
.
The Hourglass Factory
is her first novel.

This book is copyright under the Berne Convention.
No reproduction without permission.
® and © 1997 Simon & Schuster Inc. All rights reserved.

The right of Lucy Ribchester to be identified as author of this work has been asserted in accordance with sections 77 and 78 of the Copyright, Designs and Patents Act,
1988.

This book is a work of fiction. Names, characters, places and incidents are either a product of the author’s imagination or are used fictitiously. Any resemblance to
actual people living or dead, events or locales is entirely coincidental.

‘The days are past for rioting and we do not need to have recourse to bloodshed or violence to carry on our schemes of progress and reform, because we have a fairly good
franchise which is an assurance that the will of the people must prevail in these democratic days.’

At 10 p.m. on Stonecutter Street the Reuters wires begin to tick.

Nobby has his head slumped on Mr Stark’s desk and he jumps at the noise, the heavy morse code girding, the out-of-joint military march. The glass on top of the Reuters machine always
shakes because of a loose nut or perhaps the uneven floorboards beneath the desk. He cuts the ticker tape sharp the way Mr Stark likes it, no tears or rough edges.

And then he blinks.

Half an hour earlier, The Royal Albert Hall, London

Ebony Diamond had waited in the dark, her wrists bound tight as shoelaces. Her fingers had numbed to blue; the pearls of sweat on her palms were turning the mixture of flour
and
poudre d
’
amour
to paste. Behind her, Annie Evans was busy tucking into two neat sacks the crowbar, ropes and chains they had used to split the roof tiles and slink down
through the cold rafters. As she packed she sang gently, ‘The Daring Young Man on the Flying Trapeze’, singing ‘lass’ instead of ‘man’.

‘How’s he getting on?’ Annie’s eyes were soft, but her smile was frozen with nerves.

Ebony didn’t answer. She was watching the meeting going on beneath them, the Prime Minister working himself up into his speech. Down below, the moving sea of bowler hats in the auditorium
looked like iron filings in a fish bowl.

‘Legs together or legs akimbo don’t matter,’ Ebony’s mother had always told her. ‘But for God’s sake keep your arms in or you’ll lose one of
them.’ There were rumours that once at the Crystal Palace a trapeze artist had landed so sharply on a falling jolt that part of his brain seeped out through his nose.

Annie wriggled back into a squat under the low beams. She would hold out here as long as she could, but they would find her too. She hoped she and Ebony would make the same prison van.

Ebony checked the binding on her legs, squeezed a handful of flesh into a more comfortable position, ran a thumb over the sailor’s knots she had tied, and wedged the wooden bar of the
trapeze between the hollows of her feet. Annie passed her the banner and she bit its silk, and grimaced as its slippery perfume coated her teeth. She had done higher leaps than this and she had
felt sick before each of them too. But this time they both had Holloway to look forward to. The hunger-strike, the force-feeding. Ebony had heard tell that they didn’t clean the tube. She
pushed away the thought, gave Annie a last look, climbed alone onto the wooden lip of the hole. And she jumped.

Nobby watches the details judder in: dribs, drabs, sketches, the colour of lace in the woman’s bodice, the look on her face as she flew through the air. He crams a
jellied pork pie into his mouth as he scans and scans the never-ending tape. It is better than a story in
Strand
magazine.

The facts change. The Prime Minister is dead. The Prime Minister is alive. The woman is a gypsy. The woman is a Londoner. The woman had a famous mother. And as they change, the activity in the
office also changes. Reporters dig out obituaries, men are being dispatched to Bow Street police station and the Albert Hall. And all the time the tape ticks and slaps and stamps as if it will
never exhaust itself. By the time midnight comes round, the first galley proof is drawn and Nobby is growing bored. The pie is heavy in his stomach and he thinks he might sneak a swallow from
Stark’s whisky bottle in the top drawer of his desk while the night editor is out of the room. But then the tape starts up again, and this time when he looks at it he doesn’t just
blink, he cries out.

‘Did you get the newspapers? Did you get them all? Is she in it? Tell me she’s on the front page. Tell me the
London Illustrated
have dug out a
snap.’

The woman’s arms are outstretched and the sleeves of her blouse hang away from her. On her wrist a flash of emeralds, amethysts and fresh pearls catches the sunlight through the
window.

Her friend doesn’t smile and this rings a little warning bell.

The newspapers slap down onto the oak table, spilling left and right, slipping from their covers. Mrs Pankhurst and a few of the others have entered the press room, drawn by the rush of
excitement. Murmurs are circulating, questions being asked.

‘Did she get a clean swing?’

‘She didn’t hurt herself?’

Heads are craning for a better look. ‘If she did it,’ one woman says, ‘I’ll lead a deputation to Asquith myself, holding out them front pages like a banner in his
face.’

‘They can’t ignore it, that’s for sure.’

The merriment is tight and restless. Some of them were there last night; others on the blacklist for Liberal rallies who couldn’t get in have heard the stories already. They know she
‘flew like a bullet’, they know she ‘eyeballed Asquith like he was the devil’. They know about the banner saying ‘Votes for Women’. They know the crowd shouted,
‘Cut her down’, ‘Hang her from her own rope’.

But what they didn’t know, what none of them could have known, was what was staring at them from seven different front covers. Tawdry rags, fine-printed sheets. All black-edged.
‘
Titanic
Sinks – 1500 Die’, the
London Evening Gazette
’s choice of words.

Hush settles round the room. Some of the women look at Mrs Pankhurst as if she should say something, but her silvery blue eyes are fixed on the table. After a few moments of creaking and
shifting, one woman coughs and asks, ‘Is she not in it at all? Not any of them?’

‘What do you think?’ another snaps, and runs from the room.

‘Will she get second division, do you think?’

Then Mrs Pankhurst pushes her thumb smoothly behind the cover of one of the papers and begins to leaf through it, nodding occasionally, catching her breath, and as she does so the rest of the
women move forward too, and gradually the papers are distributed between silent hands and eyes.

‘Rotten luck,’ says a quiet voice from the corner of the room nearest the window. Mrs Pankhurst’s head snaps up. But someone else beats her to speak first.

The sun was beating down as Frankie George cycled along Fleet Street, trying to stop her notebook and calling cards from flapping out of her lower pockets, and her pencils from
stabbing her in the chest.

She had been distrustful of the warm weather when she’d got up at noon to receive her editor’s telegram summoning her to the Stonecutter Street offices. Now, as she dodged boys on
motorcycles puffing out violet smoke, piles of horse muck and steaming horses dragging full omnibuses, she regretted her choice of clothing; a fetching pale brown tweed trouser suit, practical for
bicycling, autumnal-hued and insulating as upholstery. The Fleet Street traffic was foul with noxious vapour and it felt like cycling through hot soup. A cart full of meat pies came wobbling
towards her and she thought for a second about reaching out to pinch one, but changed her mind when she saw the horse on the wagon behind breathing over the crusts. She veered off onto Shoe Lane,
dodging smashed jack-o’-lanterns left over from Hallowe’en the night before and it was only then that she remembered it was All Saints’ Day. And so hot. What next? Summer Punch on
Guy Fawkes night?

Stonecutter Street was mainly made up of magazine offices, all there for the cheaper rent. For the
London Evening Gazette
, that meant being crammed into a tall rambling half-townhouse,
six times as high as it was wide, leaving only enough space for one room per floor. The brickwork was poor and there were always new leaks and splits in the wall, new buckets strategically placed,
new wads of stuffing filling a whistling gap. Frankie leant the bicycle against the railings outside, where she’d last borrowed it from, and hopped up the steps.

The office was buzzing with its usual hysteria. Bundles of the early edition were being cut open, men in shirtsleeves and braces were flying up and down the stairs brandishing tissue-thin pieces
of paper. Shouts of ‘copy’ came loud and fast from each of the floors, along with wafts of Turkish tobacco and occasionally the sound of a boy being boxed on the ears.

Frankie fished in her pocket for the telegram and gave it to the man on the front desk.

‘Know what he wants?’ The man cupped his ear for her response above the din.

Frankie looked down at the note. It read, ‘STONECUTTER STREET STARK’. She shrugged. The man shrugged back and waved her towards the stairs.

The higher up the building, the more important the resident was. In the cellar, printers were operated by men in aprons who had grown so deaf from the noise of machinery that they bellowed at
each other even when they were sat across the same table in the Olde Cheshire Cheese. One floor up in the basement, skilled men with fingers as fine as a pianist’s sat at linotype machines,
setting the letters in neat little rows.

Sweetwater by Dorothy Garlock
A Distant Tomorrow by Bertrice Small
Outlaws: Inside the Violent World of Biker Gangs by Thompson, Tony
A Wish Made Of Glass by Ashlee Willis
Finding Our Forever: (A Defining Moments Novel) by Andee Michelle
The End of Cheap China: Economic and Cultural Trends That Will Disrupt the World by Shaun Rein
Whispers in the Dark by Jonathan Aycliffe
Nobody’s Child (New Life Tabernacle Series Book 1) by LaShonda Bowman
Miss Spitfire by Sarah Miller
Doubly Protected [Werewolves of Hanson Mall 2] (Siren Publishing Ménage Everlasting) by Cara Adams