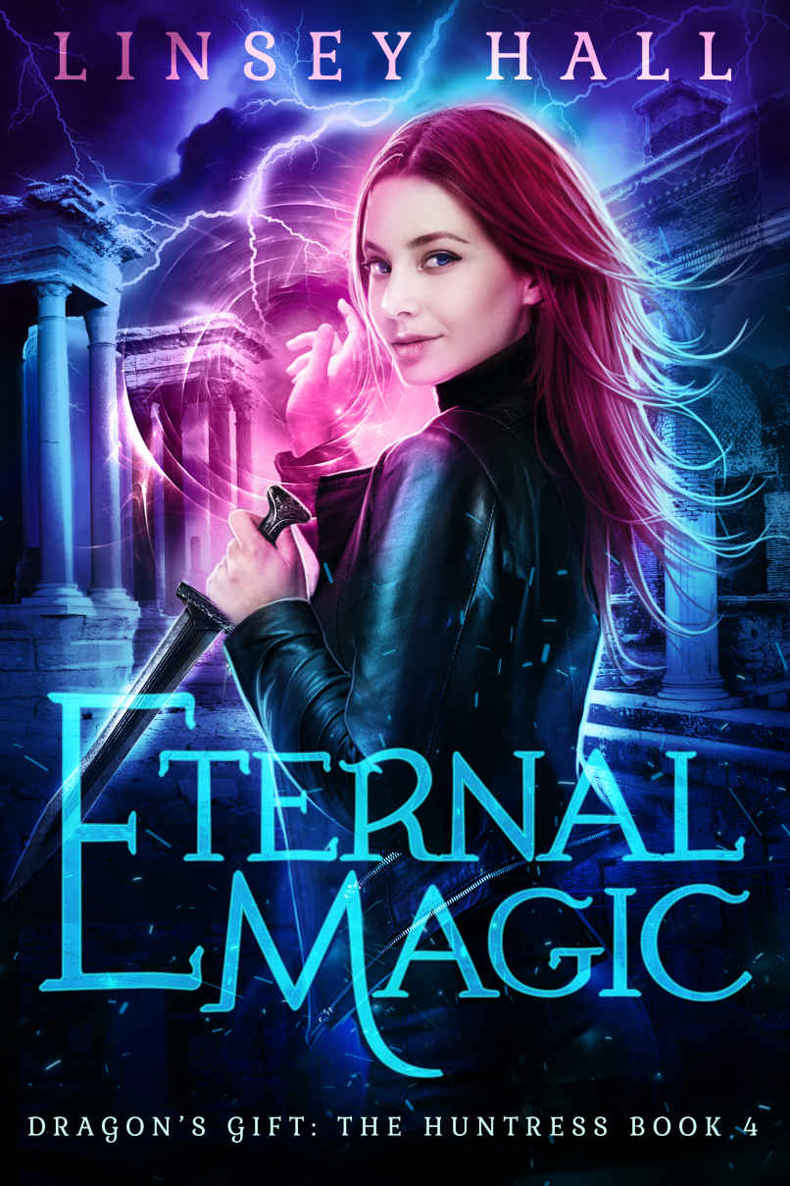 Get an exclusive Dragon’s Gift novella FOR FREE

Sign up for the no-spam newsletter & get
Hidden Magic
, an exclusive novella that is only available to subscribers.
Click here
.

“Oh no.” I almost groaned when I caught sight of the golden sphinx crouched in front of the pyramid a hundred yards away. “It’s a sphinx.”

“Twenty bucks he has a riddle for us,” Del said.

“Yep. And I’m terrible at riddles.”

An enormous Egyptian pyramid stuck out of the desert like a sore thumb, the only thing for hundreds of miles. An ocean of sand rolled around us, hills and valleys stretching far into the distance. I’d lost track of how long we’d spent bouncing along on our camels.

Del tugged the brim of the hat over her forehead and muttered, “You’re lucky I love you, Cass. Because of all the places for the dampening charm to be, it ended up in the middle of a freaking oven that blocks my magic.”

I made a noise somewhere between a laugh and a moan. Sweat dripped down my back, and my own hat was doing a miserable job of keeping my nose from burning.

“I actually quite like Aladdin.” I patted my camel’s neck. He snorted, no doubt unimpressed by the name I’d bestowed upon him.

Normally, Del would use her powers as a transporter to teleport us straight to our desired destination. This pyramid, however, had been built by supernaturals in a weird part of the Sahara that blocked teleporting. It also blocked humans from getting near the pyramid, which was a small mercy considering that human archaeologists would definitely set off the magical booby traps inside.

No one wanted that. Not the archaeologists, who’d have their perception of reality rocked by the magic, and not the supernaturals, who tried to stay hidden from them.

“This is going to be some seriously old-school tomb raiding,” I said to Del.

“No kidding. Riding a camel across the Egyptian desert in order to break into a pyramid is pretty much the height of cliché for a treasure hunter.”

“I’ll take it. The cliché stuff is sometimes the coolest. It’s cliché for a reason, right? Everyone wants to do it.” And even if it wasn’t cool, I
really
wanted that dampening charm. I’d have ridden a yak a thousand miles through the tundra to get my hands on it, so a camel through the desert was no problem. I had plenty of incentive.

Victor Orriodor, the monster from our past hunted us. One day soon, we’d clash for good. I’d accepted it. Del, Nix, and I had concealment charms that hid us from him, but mine was faulty because of my new nullification power.

Which meant the time for running was almost over. We were at the point of kill or be killed. I planned to do the killing. But I had to get my powers back first or I’d never survive the confrontation.

I hoped the dampening charm would be the way to do that.

We were only a hundred yards from the pyramid now, close enough that I could make out the features of the golden sphinx who guarded the exit. His face was human, his body that of a lion’s. He glittered in the sunlight almost like gold.

“He looks 3rd millennia BC,” Del said. “They’re usually the toughest to—”

She gasped as the sphinx lunged into the air and bounded across the sand toward us, his enormous stone body moving as if it were made of flesh and blood. Sand kicked up behind him as his powerful legs dug into the ground.

“Oh, hell.” I tightened my grip on Aladdin’s reins. Normally we’d approach, wake the sphinx up by tripping a lever or something, then answer the riddle to get through.

But this guy was gung ho. That was never good. It was the lazy temple guardians you wanted, if you had a choice.

He landed in front of us with a thud, his massive leonine body looming overhead. I tilted my head back, nearly blinded by his brightness.

“Holy magic,” I breathed. He really
was
made of gold. I’d thought it a trick of the bright sun, but no. He was one hundred-percent, Grade-A golden goodness.

Covetousness welled in my heart, a greed so fierce that my fingers itched to pet the sphinx and coo
nice kitty
. Then tie him up and stick him in my trove.

Del and I were FireSouls, supernaturals believed to share the soul of a dragon. Like dragons, we had a thing for treasure. My idea of treasure was normally weapons and leather goods, but I could make an exception for a giant hunk of gold.

I shook my head, trying to focus on our reason for being here.

“What is your purpose?” he boomed.

I dragged my gaze away from the shining sphinx and looked at Del, whose eyes were wide as saucers.

“To take you home,” she said breathlessly.

Though I wasn’t much better off. I may have lost my FireSoul powers last week, but I still seemed to possess the covetousness.

Oh, hell.
We were screwed.

I’d have hoped an Egyptian sphinx wouldn’t know the word for kitty, but he’d been enchanted to speak English, so he knew exactly what Del had called him.

The sphinx sat on his haunches and reached out with two massive paws, swooping us up, one in each paw. My head spun as we dangled in our smooth, hard cages. Shit. There was no way to budge a monster made of metal.

“Yeah, a real badass sphinx!” Del yelled, struggling to break the sphinx’s grip. “Toughest one I ever met!”

If I hadn’t lost my powers last week, I could be out of here in a flash. I wouldn’t use my lightning, because it’d go straight through the metal and fry me, too, but I could use my illusion power to scare the crap out of him so he’d drop us.

Unfortunately, none of that was an option now.

In a fight last week, I’d acquired the power to nullify other supernaturals’ abilities. Because I was a FireSoul, I could steal other people’s powers. I hadn’t wanted to take that cursed power, but it’d been the only way to prevent catastrophe. As a result, my new nullification power canceled out my innate powers. I’d been a mess ever since it had happened, and I hated it, but that didn’t mean I wouldn’t try to use it.

The sphinx shook us. My brain felt like it rattled in my head. I closed my eyes and tried to ignore it, focusing on my new gift, which was a weird kind of non-magic. that canceled out other supernaturals’ magical gifts.

The strain of trying to manipulate the unfamiliar magic broke sweat across my skin. I’d been practicing my new power, but hadn’t made much progress. I felt only emptiness within, an uncomfortable feeling of nothingness that rolled in my stomach like hunger and queasiness combined.

I gave up and shouted, “Del! Use your phantom power!”

“Right! Of course!” Her bright gaze drifted back to the golden sphinx. “Just a bit distracted, is all.”

She shook her head violently as if to clear it. Though my FireSoul liked gold, Del’s looooved it. It was a dangerous, but unavoidable, weakness.

Del’s magic surged on the air, her signature distinct. The scent of fresh laundry and the feel of soft grass beneath my feet were a delight compared to the hot, hard grip of the sphinx.

Her skin shimmered as she turned a transparent blue, and her black hair became a silvery indigo. When she’d gone full phantom-ghosty, she slipped from the sphinx’s grip and landed on the sand.

The sphinx roared, the noise pounding my eardrums. I winced.

He swatted at Del with his free paw, but it sailed right through her.

Del drew her sword. The blade flared a fiery cobalt. Whenever Del was in phantom form, the objects she touched took on the properties of a phantom.

“Get ready to run!” She turned corporeal for a second, swinging her now solid steel blade at the sphinx’s haunches.

It bounced off with a clang and she cursed. The sphinx batted her away with a paw, clearly more annoyed than angry. She landed on her butt in the sand.

The sphinx looked at me, his massive nose level with mine.

“It accepts the blind and grants them sight.”

Uhhh… My brain blanked. I glanced at Del. She shrugged.

The sphinx shook me. “Wrong!”

“A moment! Just a moment!” I shouted.

He stopped shaking. I pressed my fingertips to the golden charm hanging at my throat, igniting the magic that fueled the communications spell.

“Thank magic.” Nix was Del’s and my other half—other third?—and she was my phone-a-friend when on tomb-raiding jobs. Riddles were surprisingly common, and I was awful at them. Normally, I worked alone so I needed the help, though Del had come along on this job because I could no longer use my dragon sense to find things, and I needed her to use hers to lead us to the dampening charm.

“Got a riddle for you,” I said as the sphinx glowered. His fist tightened on my ribs, and I saw stars. When it loosened a bit, I gasped out the riddle to Nix.

The clickity-click of her keyboard keys sounded through the charm. The sphinx shook me.

“Hurry up, Nix!” I shouted. My ribs felt like they were grinding together.

I wished we weren’t treasure hunters who had to rely on Google, but there you had it. It was the modern age. What job
didn’t
rely on Google?

“School!” I shouted. “A school takes the blind and makes them see! It, uh, gives them knowledge to understand and see the world around them.” Right? For magic’s sake, I hoped it was right.

“Yes. But you must find your own way into the temple.”