Read The Lord of the Rings Online

The Lord of the Rings 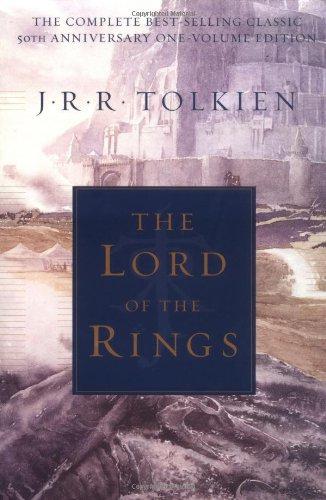 THE LORD OF THE RINGS

PROLOGUE Concerning Hobbits, and other matters

THE FELLOWSHIP OF THE RING

Chapter 2 The Shadow of the Past

Chapter 4 A Short Cut to Mushrooms

Chapter 7 In the House of Tom Bombadil

Chapter 8 Fog on the Barrow-Downs

Chapter 11 A Knife in the Dark

Chapter 12 Flight to the Ford

Chapter 2 The Council of Elrond

Chapter 4 A Journey in the Dark

Chapter 5 The Bridge of Khazad-dűm

Chapter 7 The Mirror of Galadriel

Chapter 10 The Breaking of the Fellowship

Chapter 1 The Departure of Boromir

Chapter 2 The Riders of Rohan

Chapter 6 The King of the Golden Hall

Chapter 8 The Road to Isengard

Chapter 10 The Voice of Saruman

Chapter 1 The Taming of Sméagol

Chapter 2 The Passage of the Marshes

Chapter 3 The Black Gate is Closed

Chapter 4 Of Herbs and Stewed Rabbit

Chapter 5 The Window on the West

Chapter 7 Journey to the Cross-roads

Chapter 8 The Stairs of Cirith Ungol

Chapter 10 The Choices of Master Samwise

THE RETURN OF THE KINGS

Chapter 2 The Passing of the Grey Company

Chapter 3 The Muster of Rohan

Chapter 4 The Siege of Gondor

Chapter 5 The Ride of the Rohirrim

Chapter 6 The Battle of the Pelennor Fields

Chapter 7 The Pyre of Denethor

Chapter 8 The Houses of Healing

Chapter 1 The Tower of Cirith Ungol

Chapter 2 The Land of Shadow

Chapter 4 The Field of Cormallen

Chapter 5 The Steward and the King

Chapter 8 The Scouring of the Shire

A ANNALS OF THE KINGS AND RULERS

B THE TALE OF YEARS

F THE LANGUAGES AND PEOPLES OF THE THIRD AGE

This book is largely concerned with Hobbits, and from its pages a reader may discover much of their character and a little of their history. Further information will also be found in the selection from the Red Book of Westmarch that has already been published, under the title of
The Hobbit.
That story was derived from the earlier chapters of the Red Book, composed by Bilbo himself, the first Hobbit to become famous in the world at large, and called by him
There and Back Again,
since they told of his journey into the East and his return: an adventure which later involved all the Hobbits in the great events of that Age that are here related.

Many, however, may wish to know more about this remarkable people from the outset, while some may not possess the earlier book. For such readers a few notes on the more important points are here collected from Hobbit-lore, and the first adventure is briefly recalled.

Hobbits are an unobtrusive but very ancient people, more numerous formerly than they are today; for they love peace and quiet and good tilled earth: a well-ordered and well-farmed countryside was their favourite haunt. They do not and did not understand or like machines more complicated than a forge-bellows, a water-mill, or a hand-loom, though they were skilful with tools. Even in ancient days they were, as a rule, shy of ‘the Big Folk’, as they call us, and now they avoid us with dismay and are becoming hard to find. They are quick of hearing and sharp-eyed, and though they are inclined to be fat and do not hurry unnecessarily, they are nonetheless nimble and deft in their movements. They possessed from the first the art of disappearing swiftly and silently, when large folk whom they do not wish to meet come blundering by; and this an they have developed until to Men it may seem magical. But Hobbits have never, in fact, studied magic of any kind, and their elusiveness is due solely to a professional skill that heredity and practice, and a close friendship with the earth, have rendered inimitable by bigger and clumsier races.

For they are a little people, smaller than Dwarves: less tout and stocky, that is, even when they are not actually much shorter. Their height is variable, ranging between two and four feet of our measure. They seldom now reach three feet; but they hive dwindled, they say, and in ancient days they were taller. According to the Red Book, Bandobras Took (Bullroarer), son of Isengrim the Second, was four foot five and able to ride a horse. He was surpassed in all Hobbit records only by two famous characters of old; but that curious matter is dealt with in this book.

As for the Hobbits of the Shire, with whom these tales are concerned, in the days of their peace and prosperity they were a merry folk. They dressed in bright colours, being notably fond of yellow and green; but they seldom wore shoes, since their feet had tough leathery soles and were clad in a thick curling hair, much like the hair of their heads, which was commonly brown. Thus, the only craft little practised among them was shoe-making; but they had long and skilful fingers and could make many other useful and comely things. Their faces were as a rule good-natured rather than beautiful, broad, bright-eyed, red-cheeked, with mouths apt to laughter, and to eating and drinking. And laugh they did, and eat, and drink, often and heartily, being fond of simple jests at all times, and of six meals a day (when they could get them). They were hospitable and delighted in parties, and in presents, which they gave away freely and eagerly accepted.

It is plain indeed that in spite of later estrangement Hobbits are relatives of ours: far nearer to us than Elves, or even than Dwarves. Of old they spoke the languages of Men, after their own fashion, and liked and disliked much the same things as Men did. But what exactly our relationship is can no longer be discovered. The beginning of Hobbits lies far back in the Elder Days that are now lost and forgotten. Only the Elves still preserve any records of that vanished time, and their traditions are concerned almost entirely with their own history, in which Men appear seldom and Hobbits are not mentioned at all. Yet it is clear that Hobbits had, in fact, lived quietly in Middle-earth for many long years before other folk became even aware of them. And the world being after all full of strange creatures beyond count, these little people seemed of very little importance. But in the days of Bilbo, and of Frodo his heir, they suddenly became, by no wish of their own, both important and renowned, and troubled the counsels of the Wise and the Great.

Those days, the Third Age of Middle-earth, are now long past, and the shape of all lands has been changed; but the regions in which Hobbits then lived were doubtless the same as those in which they still linger: the North-West of the Old World, east of the Sea. Of their original home the Hobbits in Bilbo’s time preserved no knowledge. A love of learning (other than genealogical lore) was far from general among them, but there remained still a few in the older families who studied their own books, and even gathered reports of old times and distant lands from Elves, Dwarves, and Men. Their own records began only after the settlement of the Shire, and their most ancient legends hardly looked further back than their Wandering Days. It is clear, nonetheless, from these legends, and from the evidence of their peculiar words and customs, that like many other folk Hobbits had in the distant past moved westward. Their earliest tales seem to glimpse a time when they dwelt in the upper vales of Anduin, between the eaves of Greenwood the Great and the Misty Mountains. Why they later undertook the hard and perilous crossing of the mountains into Eriador is no longer certain. Their own accounts speak of the multiplying of Men in the land, and of a shadow that fell on the forest, so that it became darkened and its new name was Mirkwood.

Before the crossing of the mountains the Hobbits had already become divided into three somewhat different breeds: Harfoots, Stoors, and Fallohides. The Harfoots were browner of skin, smaller, and shorter, and they were beardless and bootless; their hands and feet were neat and nimble; and they preferred highlands and hillsides. The Stoors were broader, heavier in build; their feet and hands were larger, and they preferred flat lands and riversides. The Fallohides were fairer of skin and also of hair, and they were taller and slimmer than the others; they were lovers of trees and of woodlands.

The Harfoots had much to do with Dwarves in ancient times, and long lived in the foothills of the mountains. They moved westward early, and roamed over Eriador as far as Weathertop while the others were still in the Wilderland. They were the most normal and representative variety of Hobbit, and far the most numerous. They were the most inclined to settle in one place, and longest preserved their ancestral habit of living in tunnels and holes.

The Stoors lingered long by the banks of the Great River Anduin, and were less shy of Men. They came west after the Harfoots and followed the course of the Loudwater southwards; and there many of them long dwelt between Tharbad and the borders of Dunland before they moved north again.

The Fallohides, the least numerous, were a northerly branch. They were more friendly with Elves than the other Hobbits were, and had more skill in language and song than in handicrafts; and of old they preferred hunting to tilling. They crossed the mountains north of Rivendell and came down the River Hoarwell. In Eriador they soon mingled with the other kinds that had preceded them, but being somewhat bolder and more adventurous, they were often found as leaders or chieftains among clans of Harfoots or Stoors. Even in Bilbo’s time the strong Fallohidish strain could still be noted among the greater families, such as the Tooks and the Masters of Buckland.

Breaking the Ice by Kim Baldwin
The Widower's Two-Step by Rick Riordan
I Like Old Clothes by Mary Ann Hoberman
144: Wrath by Caldwell, Dallas E.
The Summer's End by Mary Alice Monroe
Daddy's Surprise by Lexi Hunt
Haggard by Christopher Nicole
Unchained: A Stepbrother Romance by Johnson, Emma
Lizabeth's Story by Thomas Kinkade
Rosa and the Veil of Gold by Kim Wilkins