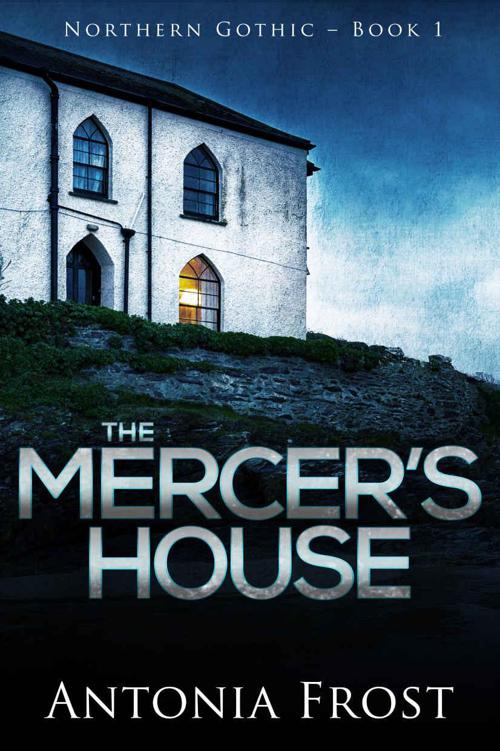 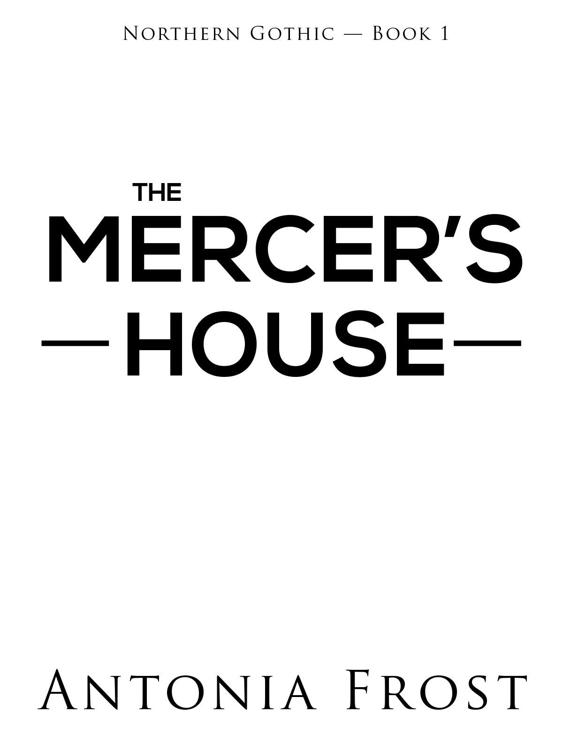 The right of Antonia Frost to be identified as the author of this work has been asserted by her in accordance with the Copyright, Designs and Patents Act, 1988

The characters and events portrayed in this book are fictitious. Any similarity to real persons, living or dead, is coincidental and not intended by the author

This book is sold subject to the condition that it shall not, by way of trade or otherwise, be lent, resold, hired out, or otherwise circulated without the publisher’s prior consent in any form of binding or cover other than that in which it is published and without a similar condition including this condition being imposed upon the subsequent purchaser

ON THE windswept Northumberland coast stands the Mercer’s House, thought to be haunted by the ghost of a woman who in earlier times died a violent and tragic death at the hands of her husband. Now it holds the key to the mystery of Helen Devereux, who disappeared with her young son twenty-five years ago and was never seen again. In the intervening years the Devereux family have done their best to come to terms with their loss, but their fragile peace is shattered when Zanna Chambers arrives at the Mercer’s House in search of her Aunt Helen, after a promise made to her father.

Zanna is recovering from a battle with her own demons, but her search brings them back more terrifyingly than ever when she starts to receive mysterious communications, seemingly from Helen herself. But are the messages real or imagined? Confused as to her own sanity, and unexpectedly attracted to the Devereux brother who was left behind, Zanna must decide whether to flee back to the safety of her old life, or continue the search for Helen and strike out into the frightening unknown.

In the meantime, if you’d like to read more of my work, I also write 1920s mysteries under the name of Clara Benson.
You can check them out here
.

To Paul, for the title

(and everything else, obviously)

Y
OU WON’T find the little town of Elsbury on any map of Northumberland, because I invented it—or, shall I say, I amalgamated some of the geography of the area into a town that suited the purposes of my story. I also borrowed the East Coast Main Line from Alnmouth and put it in Elsbury instead. Imaginary towns notwithstanding, Northumberland is a beautiful county, and I can heartily recommend a visit.

S
UCH A
lovely day. It was cold on the beach, but we all went down and threw sticks for Skip, who I thought would freeze to death running into the sea. He didn’t, of course—he just stood next to Alex and shook himself, while the boys screamed with laughter. Rowan in particular thought it was hilarious. He kept pretending to be a dog, and was barking and shaking himself over everybody. He gets more and more delightful each day, and I couldn’t possibly love him more if I tried. Father Christmas brought him some colouring pencils, and he’s taken a real shine to them. This morning he brought me a picture that he said was of me, and it’s not bad at all considering he’s only three. I wonder whether he’ll have an aptitude for art? It’s too early to tell, I expect, but it would be nice to think we had that in common as he grows up. I’m going to start painting again soon. I feel ready for it now, and the scenery around here is so inspiring. Perhaps I’ll try not to destroy my work this time, although I can never get over the feeling that capturing a view takes something away from it, somehow. That sounds silly written down. I will get over it and paint something pretty to hang in the house.

It’s been a happy Christmas all round, I think. It was lovely to have Alex home, since he’s been working away such a lot recently. He’s been telling me more about the story of the woman who died here two hundred years ago, and the whispering voices people hear on the beach. It’s a horrid story, and odd, too, because when he mentioned it I suddenly remembered the other day, when I thought I heard something while I was out with Skip. It was like a kind of murmuring in my ear, down by the rocks, although I couldn’t hear what it said. For a second I was terrified the voices were coming back, but then it faded out, so I think it must have been my imagination. I’d rather he hadn’t mentioned it, though. I don’t like ghosts. But better ghosts than—no, I won’t think about that.

I don’t think I’ve ever been so happy. I love having us all here as a family for Christmas, even Will. He was grumpy at having to come here instead of stay with his mother, but he seems to have cheered up a bit now. I need to work on Will. He and Rowan will be friends, I’m determined. There’s no reason why they shouldn’t get on. I need to convince him that we’re not intruders, come to take Alex away. He isn’t rude, exactly, but he’s wary and reserved, and won’t let on what he’s thinking. I only hope he’ll accept us eventually, and learn to trust me, especially since his father is away for work so much and it falls to me to look after Will when he’s not at his mother’s. Alex joked today in that half-apologetic way of his that he was worried he’d come home one day and find I’d divorced him. But I’d never do that. I knew he was a busy man when I married him, but it didn’t put me off. He’s so understanding, and such easy company, that I’d put up with a lot more from him than I do. Besides—and I’ll never tell him this—he’s almost doing me a favour by his absence. It’s a struggle to keep everything contained sometimes, and I’m afraid if he were here too often I’d blurt it all out, everything I’ve tried so hard to forget, and then he’d stop loving me, or at the very least be disappointed in me. It’s never nice to find out that someone’s not what you thought they were, and even though it wasn’t my fault, I do worry that he won’t see it that way, and that I’ll have to leave and start all over again. I couldn’t bear to lose Alex. I do love him so.

Strange about the voices, though. I see Corbin looking at me sometimes, and wonder if he suspects. I’ve never told them about it, and I won’t. It doesn’t do to dwell on past unkindness, and everyone here is so terribly kind that I’m certain it will keep me well. That’s what I need. As long as people are kind to me, then the horror won’t come back, I know it…

‘E
XCUSE ME. It was Elsbury you wanted, wasn’t it?’

The voice was talking to her. Zanna turned her head and gazed uncomprehendingly at the young Australian who had been sitting opposite her since he got on the train at York. He had attempted eye contact and friendly overtures at an early stage of the journey, but Zanna wasn’t in the mood to respond and had merely given him a polite smile and replied as briefly as possible to his remarks. He’d taken the hint without offence, and settled back to flick through a well-thumbed tourist guide and clear out a mass of old tickets and leaflets from the pockets of his rucksack, leaving Zanna free to absorb herself as much as she liked in her own thoughts.

‘Do you want a hand with your stuff?’ said the Australian, and Zanna finally realized with a start that they were just pulling into the little station at Elsbury. She stood up, knocking over the empty paper cup that had been drained of coffee long ago, and began collecting her things together hurriedly.

‘Thanks,’ she said, as the young man took down her suitcase and holdall from the overhead rack. She smiled at him, and he said goodbye as if they were old friends as the doors beeped and she stepped down onto the platform. Too late she noticed how good-looking he was, and briefly regretted having paid him so little attention. He waved to her through the window as the train pulled away and disappeared into the distance. She returned the salute then immediately forgot about him as she turned to leave the station.

The place was a small one, but Zanna’s bags were heavy and she didn’t know the way, and so she relented and took a taxi to the bed and breakfast place she had booked five days earlier. The B&B turned out to be a pub called the Coach and Horses. It was situated on the High Street and a sign in the window promised that it provided the friendliest hospitality in the whole of Elsbury. Zanna went in and found herself in a panelled entrance hall, with to one side a little reception desk. Behind it sat a young man with pierced eyebrows and a death metal T-shirt, who was engaged in painting his nails with black polish. He looked up as she entered.

‘Hello, my darling,’ he said in an accent which was unmistakably London, and which seemed exotic in this out-of-the-way corner of the north so close to Scotland. ‘I’m glad you turned up—I haven’t spoken to a soul all day and I was just about to start screaming with boredom.’

‘You wouldn’t believe,’ said the man. ‘I hate it when the schools go back. That’s it till Christmas now.’

Nothing but Trouble by Susan May Warren
Game Theory by Barry Jonsberg
Inventario Uno 1950-1985 by Mario Benedetti
Secrets and Lace: A Dark Romance Thriller (Fatal Hearts Series Book 1) by Dori Lavelle
Proven Guilty Boys in Blue 05 - by Mia Watts
Los jardines interiores by Amado Nervo
A Billionaire BWWM Romance 5: The Other Man by Bwwm Romance Dot Com, J A Fielding
The Ships of Merior by Janny Wurts
In the Shadow of Midnight by Marsha Canham
The Sun and the Moon (Giving You ... #1) by Leslie McAdam