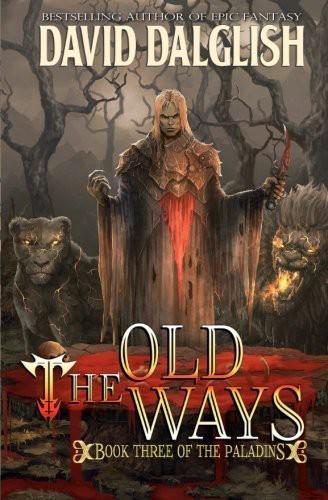 The Weight of Blood

The Cost of Betrayal

The Death of Promises

The Shadows of Grace

A Sliver of Redemption

A Dance of Cloaks

A Dance of Blades

A Dance of Death

J
erico reached for his shield as he heard the rider thunder into the dark village of Wilhelm.

“What’s going on?” asked Darius, sitting up in his bedroll. “Is he one of Sebastian’s?”

Jerico shook his head, peering through a crack in the door of the small shed that they slept in.

They’d been on the run since the battle between Arthur and Sebastian Hemman, the two paladins originally on opposite sides of the conflict. But Jerico had won his friend over, and together they’d defeated several faithful to Karak. Arthur’s army had lost, however, forcing them to flee to safety. Sebastian’s men had combed the surrounding forests, and it had taken a lot of running, and a bit of luck, for the two to reach Wilhelm without being seen. They’d rented the only room available in the farming village: the shed.

“I only use it when an animal gets sick, to keep it away from the others,” the farmer had said. “Don’t worry none. Been awhile since the last, and I changed the straw.”

Jerico had been looking forward to his first peaceful night of sleep in what felt like days, but then the horsed rider had come, crying out something Jerico hadn’t quite caught...

“He might be looking for Arthur’s men,” Darius said, rubbing his eyes.

“The village is loyal to Kaide,” Jerico said, pressing open the door. The rider had stopped in the village square, and several older men and women were coming out to greet him in their bedclothes.

Jerico nodded. Kaide was a local hero in the North, a bandit who robbed Sebastian Hemman’s caravans and gave away the wealth and supplies he didn’t need. It was his private war against Sebastian that had started everything, with Arthur only recently taking up arms against his brother.

“We are safe, no matter the coin they offer.”

“No matter the coin?” asked Darius.

“Well, within reason. Everyone has their price.”

“That so? Then what is yours?”

“Eternity,” said Jerico, stepping outside the shed. “I’d love to see Sebastian offer me that.”

Given Jerico’s prominent role in the battle, he knew he needed to be careful, in case the rider had been told his description. With his long hair, red beard, and blue-silver armor, he wasn’t the most easily forgotten of men. Still, the night was dark, and his armor was in the shed. If he kept his distance, he should be able listen in without being noticed.

The rider was still gathering people, ensuring that there would be no need to repeat himself before riding off to his next destination. Jerico leaned against the side of a house, hidden in the shadows cast by the torchlight. The rider wore light armor, and he bore a crest Jerico recognized. Sir Robert Godley and his men had worn similar markings when they came to help fight off the wolf-men in Durham. It seemed like ages ago to Jerico, but he knew it’d been hardly three months. He felt his worry lessen. Robert was a friend, and had little to do with the brothers’ conflict.

“People of Wilhelm, I seek a man responsible for a most terrible tragedy,” the rider began. The speech was well-rehearsed, and though his words were fiery, he spoke them in a perfunctory manner. To Jerico, he sounded beyond exhausted. “Not long ago, a man helped burn down the village of Durham, and slaughtered many of its residents. This act was done without mercy and without reason. I’ve come offering a bounty of five hundred gold coins to whoever brings me, or any proper authority of the King, this man’s head.”

A gasp ran through the people. Five hundred gold was a fortune, a thousand times more than any farmers might see in their lifetime. Jerico felt something catch in his throat as he thought of Durham. He’d preached alongside Darius there, becoming friends with the people. He’d lost many fighting the wolf-men, succeeding only because of Robert’s help. Now someone had attacked it again?

“Who?” asked one of the crowd, as if on cue. Who indeed, thought Jerico. He found himself wishing he held his mace in hand. Who would dare defile the sacrifices they’d made?

“His name is Darius,” cried the rider. “A tall man with long blond hair. He hails from the Stronghold, and wears the cruel armor of their kind. He is extremely dangerous, and should be greatly feared. My master, Sir Robert Godley, offers this bounty so this vile criminal will be brought to justice for his terrible deeds.”

Jerico felt like he’d been punched in the gut. His blood drained from his face, and as the people began to murmur, he remembered the words he’d spoken in jest not moments ago.

Everyone has their price.

Indeed. And the villagers’ were just exceeded tenfold.

Jerico turned and ran for the shed, knowing time was not on their side. Darius waited for him, leaning beside the door with his arms crossed. Seeing Jerico’s worry, he frowned.

“Put your armor on,” Jerico said, ignoring him. “Now.”

The countless hours spent putting on and taking off the cumbersome plate and chainmail served him well as Jerico donned it in the darkness. Darius strapped on his greaves, then reached for his chestplate.

“What’s going on?” he asked again.

Jerico knew he should ask about Durham, but wasn’t sure he wanted to hear the answer. Still, he had to know.

“There’s a bounty on your head,” he said, not looking at his friend. “They say...they say you helped destroy Durham. Helped kill a lot of people.”

He left his question unspoken as he pulled on his gauntlets. Torchlight flickered through cracks in the walls as outside the first of many arrived. They would not rush in until the whole town was gathered, Jerico was certain. Their little shed would be surrounded, with more coming every second, all to guarantee no escape. He grabbed his mace and his shield. Soft blue light shone across them. In the light, Darius met his gaze.

“I killed no one,” Darius said. “But I was there, and I deserve their anger.”

Jerico struck a board, felt the whole shed vibrate. Several people outside gasped.

“Come out, Darius,” someone shouted. Jerico recognized him as the messenger from Robert. “There’s no reason to spill any more blood.”

Darius finished putting on the last of his armor, then reached for his weapon. It was an enormous two-handed sword, its edges serrated in sections. It shimmered with a faint light, far dimmer than Jerico’s shield. The glow represented the strength of their faith, and Jerico felt worry squirm in his gut at how weak Darius’s was. Whatever had happened at Durham, it still troubled him greatly.

“Darius!” cried the messenger amid an uneasy rumble of conversation.

“What do I do?” asked Darius. “They’ll be knocking down the walls any second.”

“I’d say greedy. How much was the bounty?”

“If you are guilty, they’re just obeying the law. I won’t shed innocent blood.”

“I won’t give myself up for a hanging. You must trust me. I killed no one; even did my best to protect them. Don’t you dare turn on me here.”

The door rattled. Jerico kicked it open, and as the people scattered away, he stepped out amid the mob, his shield shining bright on his arm. There were over two hundred gathered, men and women of all ages. Those closest bore weapons, sickles, pitchforks, and staves designed for farming, not warfare. Only Robert’s messenger wielded a blade, and he held it before him as if expecting Jerico to attack at any moment. Jerico looked into their eyes as they held their collective breaths. He saw fear, desperation, and a greedy hope for something far beyond their tired, meager lives. He could not blame them.

But that didn’t mean he had to accept it.

“Go back to your homes,” he told them. “We were offered safety, and a soft place to lay our heads. Will you betray that now, all for the promise of gold?”

“He’s a criminal,” said an older man. Jerico recognized him as the farmer who had lent them the shed. Several others murmured in agreement.

“As am I,” Jerico said. “An outlaw, so says your Lord Sebastian. Will you turn me in next?”

Plenty looked unhappy at that. Support for Kaide ran deep, and Jerico had quickly become a hero for his pivotal role in the battle at Green Gulch. Only the messenger seemed not to care.

“That’s different,” muttered one of the farmers. “You ain’t done what he’s done. Send him out, and let it all be over quick.”

Jerico felt torn, but knew he could show no weakness. He needed to hear it from Darius’s lips, know for certain what had happened. Shed no innocent blood. If there was anything that had been hammered into his thick skull during his training at the Citadel, that had been it. But he was also trained to protect, and letting his friend be strung up by a mob felt a bit contradictory to that.

“The coin won’t buy you happiness,” Jerico said, his voice softer. “It will only tear apart the love you have for one another. It won’t bring peace. It won’t bring safety. Do not do this. You offered us shelter and safety. Don’t stain your hands with treachery.”

Before any could answer, Darius stepped out into the night. His armor, dark steel, shimmered in the torchlight. His hollow eyes looked to the crowd, which gave him a wide berth. Despite their numbers, attacking someone so well armored, strong, and skilled was something none of them were prepared to do alone.

“Enough,” he said, his voice carrying authority. Jerico had always considered him the far better speaker, and a master at manipulating crowds. Many stepped back, as if expecting him to draw his blade, which so far remained on his back.

“Darius, you’re under arrest,” said the messenger. He was sweating, and his sword was unsteady in his hand.

“I have too much to atone for. My life does not end here, not to a misled mob in the dead of night. I do not want to hurt any of you, and Jerico will insist the same. I have done many wrongs, but of this, I am accused unfairly. I took no lives. I spilled no blood. If you would hang me, or cut off my head, you end the life of the wrong man. The one who committed that deed is dead, slain by my hand. Move aside, and let us be. We still fight for you, for Kaide. But I will protect myself if I must.”

Disturbing Ground by Priscilla Masters
Sostiene Pereira by Antonio Tabucchi
The Shaktra by Christopher Pike
The Dom with the Dragon Tattoo [Masters of Submission 5] (Siren Publishing Everlasting Classic) by Jan Bowles
The Doomsday Testament by James Douglas
High Hearts by Rita Mae Brown
The Safety of Objects: Stories by A. M. Homes
My Italian Stallion by Sasha Collins
Octopus Alibi by Tom Corcoran
The Wandering Falcon by Jamil Ahmad