Read The Once and Future Spy Online

The Once and Future Spy 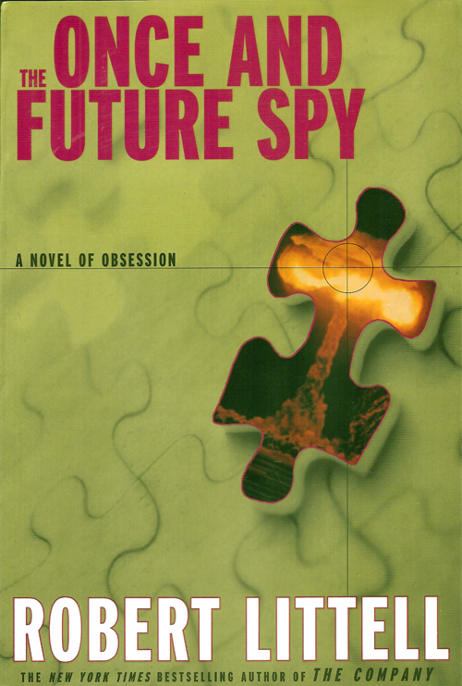 Walking Back the Cat

An Agent in Place

The Defection of A J. Lewinter

This edition first published in the United States in 2003 by

All rights reserved. No part of this publication may be reproduced or transmitted in any form or by any means, electronic or mechanical, including photocopy, recording, or any information storage and retrieval system now known or to be invented, without permission in writing from the publisher, except by a reviewer who wishes to quote brief passages in connection with a review written for inclusion in a magazine, newspaper, or broadcast.

… not a single absolute truth

but a welter of contradictory

Walking Back the Cat

INSTRUCTIONS for the inlifting of MEN

… let our manners diftinguifh us from

our enemies, as much as the caufe

we are engaged in.

R
ank has its privileges. One of them is to keep underlings waiting. Wanamaker was savvy enough to understand that this was
the natural order of things; to not take it personally. He peered at the roman numerals glowing on his wristwatch, shrugged
a shoulder stoically, tried the car radio again. Again all he got was static.

Sometimes it seemed as if all he ever got was static. Static about budgets being chiseled in stone from the upwardly mobile
asshole who ran the Special Interagency Antiterrorist Working Group. Static from his subordinates on Operations Subgroup Charlie,
who didn’t appreciate the relation between rank and privilege. Static from his contact in the superstructure about deadlines,
as if Wanamaker didn’t know a deadline when he saw one; as if bellyaching about the occasional delay would make things run
more smoothly.

Too much static could give a man ulcers, Wanamaker suspected. He could see himself filling in the Company form, in triplicate,
requesting sick leave; under “Description of Malady” he would write “A terminal case of static.”

From the bowels of the underground garage came the sudden whine of a motor starting up. At last! Wanamaker stubbed out his
Schimmel-penninck (he had given up giving up smoking the instant the love letter, anonymous, ominous, landed in his in-basket)
and glanced at the elevator doors. Above them tiny lights began blinking like fireflies
as the elevator started down. It stopped on the minus-four level. The silver doors parted. Two young men wearing loose-fitting
sport jackets to conceal their shoulder holsters swept out and proceeded to secure the area. They checked the handful of government
cars parked on the minus-four level. They checked the alcoves. They checked the emergency staircase. Then they checked Wanamaker.
One of them beckoned with a forefinger. Wanamaker opened the door and spilled himself out of the car. The young man frisked
him so thoroughly Wanamaker squirmed in embarrassment. Flashing a sliver of a smile, the young man nodded toward the elevator.
Wanamaker started toward it.

Sucking on the gnawed end of a dead pipe, studying some notes scribbled in longhand on the back of an envelope, a thickset
man dressed in a tuxedo slouched against one wall of the elevator. He noticed Wanamaker and reached into a pocket to turn
up his hearing aid. More than one journalist had attributed his success in the superstructure to a convenient deafness; he
had the knack of hearing what it suited him to hear, it was suggested, and not a syllable more.

“I assume this is important,” the man in the elevator told Wanamaker. No small talk, not a word about being an hour and a
quarter late. “I have an after-dinner speech to deliver. The President is one of the guests.”

The thickset man waited for him to go on so patiently that Wanamaker wasn’t sure he had been heard. He raised his voice. “I
got a love letter in the interoffice packet today.”

“You don’t need to shout. It mentioned Stufftingle? It used the word?”

“Only that? Nothing more?”

“What I make of it is we have got to get to the bottom of this real quick or call the whole thing off.”

“Someone’s playing games with you,” the thickset man decided. “That kind of thing goes on around your shop, I’m told.”

“It happens,” Wanamaker conceded. “Somebody you rub the
wrong way wants to get back at you. So he tries to make it seem as if you have a leak. On the other hand, it’s me that’s sitting
out there on the limb and I’m not excited about taking the fall.”

The thickset man produced a gold and silver cigarette lighter and angled the flame into the bowl of his pipe. He sucked it
into life, filling the elevator with a haze of vile-smelling smoke. “Let’s try to identify the author of your love letter
before we jump to conclusions,” he remarked.

Wanamaker made no effort to hide his lack of enthusiasm.

The thickset man realized Wanamaker needed stroking. “Before he died,” he said in a low voice, “the Director told me you were
one of the handful of people at the Company who could be counted on. He told me you were one of us.”

“He told me you were an artist at operations. He said you didn’t so much plan them as choreograph them. He said you could
keep more balls in the air than a juggler.”

“I do what I’m paid to do. The difference between me and the next guy is I do it better.”

“Stufftingle is not just another operation. A great deal is riding on it.”

“It is. I know. Trouble is, we’re in no position to ask the Company to walk back the cat for us.”

“Walk back the cat?”

“Take the operation apart piece by piece. Find out where the leak comes from. Plug it.”

“Call in a freelancer,” the thickset man suggested. “Some retired talent who could use the action, not to mention the cash,
and knows how to keep his mouth shut.”

Wanamaker thought about this. “There’s an admiral down in Guantánamo who’s done that kind of thing. I used to work for him.
Ex-Naval Intelligence. Ex-Company counterintelligence. Eccentric as a hatter, but brilliant. He was brought in a couple of
years ago to walk back the cat on that Soviet defector who skipped home to Moscow first chance he got. It was the Admiral
who fitted the pieces together—who figured out the defector had been a double agent all along.”

Wanamaker shook his head in vigorous agreement. Several flakes of dandruff drifted down toward his shoulders. “He’ll assume
it’s a Company operation. Where is it written I have to straighten him out?”

Wanamaker cranked an ingratiating smile onto his normally immobile features. Few people at his level dealt directly with someone
who was not only in the superstructure, but a member of the President’s inner circle. If Stufftingle succeeded, Wanamaker’s
star would soar. “Definitely. Count on it,” he replied.

“I do.” The thickset man reached into his jacket pocket and turned down the hearing aid. It was apparent from his expression
that deafness had fallen like a curtain between him and Wanamaker.

“Well,” Wanamaker said to no one in particular. He shrugged a shoulder and backed out of the elevator. The two young men backed
in. The silver doors slid closed. The motor started up. Over the elevator doors the fireflies began blinking again.