The Pillow Book of Lady Wisteria 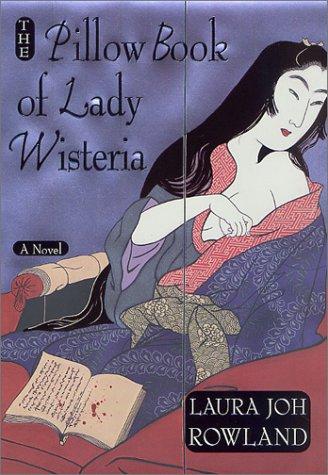 The Pillow Book of Lady Wisteria

THE PILLOW book of LADY WISTERIA. Copyright © 2002 by Laura Joh Rowland. All rights reserved. Printed in the United States of America. No part of this book may be used or reproduced in any matter whatsoever without written permission except in the case of brief quotations embodied in critical articles or reviews. For information address St. Martin’s Press, 175 Fifth Avenue, New York, N.Y. 10010.

To my editor, Hope Dellon, for her keen perception and wise advice.
My heartfelt thanks to her and everyone else at St. Martin’s Press.

“Virtuous men have said, both in poetry and classic works, that houses of debauch, for women of pleasure and for street-walkers, are the worm-eaten spots of cities and towns. But these are necessary evils, and if they be forcibly abolished, men of unrighteous principles will become like raveled thread.”

Northwest of the great capital of Edo, isolated among marshes and rice paddies, the Yoshiwara pleasure quarter adorned the winter night like a flashy jewel. Its lights formed a bright, smoky halo above the high walls; the moon’s reflection shimmered silver on the encircling moat. Inside the quarter, colored lanterns blazed along the eaves of the teahouses and brothels that lined the streets. Courtesans dressed in gaudy kimono sat in the barred windows of the brothels and called invitations to men who strolled in search of entertainment. Roving vendors sold tea and dumplings, and a hawker beckoned customers into a shop that sold paintings of the most beautiful prostitutes, but the late hour and chill weather had driven most of the trade indoors. Teahouse maids poured sake; drunken customers raised their voices in bawdy song. Musicians played for guests at banquets in elegant parlors, while amorous couples embraced behind windows.

The man in an upstairs guest chamber on Ageyachō Street lay oblivious to the revelry. A drunken stupor immobilized him on the bed, which seemed to rock and sway beneath him. Singing, samisen music, and laughter from the parlor downstairs echoed up to him in waves of discordant sound. Through his half-open eyes he saw red lights glide and spin, like reflections in a whirlpool. A painted landscape of gardens slid along the periphery of his vision. Dizzy and nauseated, he moaned. He tried to recall where he was and how he’d gotten here.

He had a faint memory of a ride through winter fields, and cups of heated sake. A woman’s beautiful face glowed in lamplight, eyes demurely downcast. More sake accompanied flirtatious conversation. Next came the hot, urgent intertwining of bodies, then ecstatic pleasure, followed by much more drink. Because he possessed a hearty tolerance for liquor, he couldn’t understand how the usual amount had so thoroughly inebriated him. A peculiar lethargy spread through his veins. He felt strangely disconnected from his body, which seemed heavy as stone, yet afloat on air. A pang of fear chimed in his groggy consciousness, but the stupor dulled emotion. While he tried to fathom what had happened to him, he sensed that he wasn’t alone in the room.

Someone’s rapid footsteps trod the tatami around the bed. The moving hems of multicolored robes swished air currents across his face. Whispers, distorted into eerie, droning gibberish, pervaded the distant music. Now he saw, bending over him, a human figure—a dark, indistinct shape outlined by the revolving red light. The whispers quickened and rose to a keening pitch. He sensed danger that shot alarm through his stupor. But his body resisted his effort to move. The lethargy paralyzed his limbs. His mouth formed a soundless plea.

The figure leaned closer. Its fist clenched what looked to be a long, thin shaft that wavered in his blurry vision. Then the figure struck at him with sudden violence. Pain seared deep into his left eye, rousing him to alertness. A squeal of agony burst from him. Music, laughter, and screaming rose to a cacophonous din. Turbulent shadows rocked the chamber. He saw a brilliant white lightning bolt blaze through his brain, heard his heart thunder in his ears. The impact heaved up his arms and legs, which flailed as his body convulsed in involuntary spasms. But the terrible pain in his eye pinned him to the bed. Blood stained his vision scarlet, obliterated the person whose grip on the shaft held him captive. His head pounded with torment. Gradually, his struggles weakened; his heartbeat slowed. Sounds and sensations ebbed, until black unconsciousness quenched the lightning and death ended his agony.