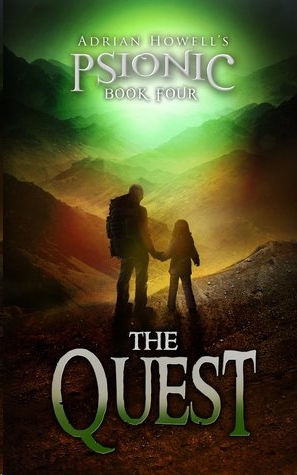 The psionic war, once thought to be at an end, has been reignited by the rise of a new and exceptionally powerful Angel master. Escaping the fall of their psionic city with a group of refugee children in tow, Adrian and his team face the daunting challenge of keeping their young charges alive as the Guardians are slowly pushed to the brink of destruction. To reunite his family and put an end to the Angel onslaught, Adrian agrees to join a perilous expedition to the far side of the world. There he will seek his answers from a living god… answers that will tell him whether the Guardians have any chance of turning the war around, or if this world of chaos is only the beginning…

Titles Available in the Psionic Pentalogy

All characters, places and events in this work are fictitious. Any resemblance to actual events, locations, organizations, real persons, living, dead or yet to be born, is purely coincidental.

All Rights Reserved. No part of this book may be reproduced or transmitted in any form or by any means, electronic, mechanical or psionic, including photocopying, recording, telepathy, dreamweaving, and information storage and retrieval systems without the permission of the author, except in the case of a reviewer, who may quote brief passages embodied in critical articles and reviews.

Chapter 1: The Man at the Window

Chapter 7: The Cracks in the Song

Chapter 16: Those Without Reason

Chapter 17: The Price of a History

Chapter 19: The Balance of Power

When you are young, the world looks young. There’s right and there’s wrong just as clearly as the sun and the moon. There’re good guys and bad guys, and the good guys always win in the end. Sooner or later, though, you have to grow up. You have to learn which battles to fight, and which ones to walk away from. Because you can’t win them all.

In my experience, you often can’t win any of them. At least, not the ones that really matter.

My name is Adrian Howell, but through the years following my sudden leap into the unknown, I’ve answered to several other names, including but not limited to Adrian Gifford, Addy, P-47, Hansel and Half-head. Sometimes I wonder which one would mark my grave after I die, but then again, people like me often don’t get graves. They just disappear. And perhaps that’s for the best.

I probably shouldn’t have even bothered writing an introduction for this book. It is my fourth, after all. If you have followed my story this far, then I see little point in dissuading you from reading further. Besides, the more you know about us, the better prepared you will be if someday you were to become one of us. It’s rare, but it happens.

I have just one warning, however, that I can neither stress nor repeat enough: We are neither heroes nor villains, but we take our secrecy very seriously. So as long as you are still human, don’t ever go looking for us. Because you just might find us, and I already have too much blood on my hands, thank you very much.

Chapter 1: The Man at the Window

The high-pitched siren went off just as Alia and I had finished eating dinner.

“Oh, not again!” I said irritably as the deafening noise filled every corner of our fortieth-floor penthouse at the top of the New Haven One building.

This made the sixteenth time our panic alarm had been set off in the last two and a half weeks. The first time was the day after Terry’s birthday, the next, three days later. From then, they became more and more frequent. Half of them in the middle of the night, the rest invariably at mealtimes and bath times. Sometimes twice or even three times a day. And now this. Another damn false alarm.

Alia was helping me clear the dishes off the table, and I shouted to her over the din, “Could you go get that turned off? I’ll take care of the plates.”

“Sure, Addy,”
Alia replied into my head.

My sister always used her telepathy when she was alone with me, speaking with her mouth only when there were multiple people in the room. This time, however, she probably would have used her telepathy regardless, since she would have to shout to be heard over the ear-splitting noise. Shouting wasn’t one of Alia’s strong points.

Alia scampered off to the game room where Terry and I often played pool. With a solid steel door and shielded walls, the game room doubled as our safe room. It contained an intercom that linked to New Haven One Security, where jumpy Guardian Knights remote-activated our panic alarm every time they heard a mouse fart.

I took the dirty dishes in my hands and levitated the unused clean ones in front of me, carrying them back to the kitchen. I always had to be careful with my telekinetic power when I was distracted or irritated, as was the case now. Losing my focus would mean shattered dishes all over the floor.

I wasn’t just upset by the alarm, though.

Alia and I had spent much of the afternoon cooking up a welcome-home meal for Terry, who had returned from a Raven Knight mission today – her first since her return to active duty. But Terry had called in the evening to tell us that she was still in debriefing with her unit leader, Jack Pearson, and that they would be eating out. Cindy was late too. She had been delayed at another Council meeting, and that was after explicitly asking me to prepare a fancy turkey dinner for everyone to eat together.

I huffed as I loaded the dishwasher. Since when had I turned into an angry homemaker?

With Terry and Alia’s assistance, I had used the Guardian leader, Mr. Travis Baker, to help me sneak into the Angel camp, where I successfully made contact with my lost sister, Catherine. And there I learned that Cat no longer shared my last name. Returning empty-handed, I narrowly escaped execution at the hands of the man Cat now called Father: the Angel queen’s nephew, Randal Divine.

Then, before I managed to return to the Guardians, I condemned my former Raven commander, Mr. Jason Simms, to what I hoped would be a slow and painful death. Instead of helping him escape with a broken leg, I had blasted a hole through his elbow. Either he died in the tunnel where I left him, or the Angels found him and put him through weeks of torture. A fitting end to the man who used to brutally murder the children of our enemies. Though I realized that what I had done to Mr. Simms made me not all that different in the ethics department, my only true regret was that Mr. Simms had carried many of the Guardians’ secrets, and if he had been found, those secrets might be in Angel hands now.

And then there was Laila Brown… The first girl I ever kissed. The upstanding girl who insisted that good guys should never hide. When the Guardian Knights killed the Angel queen and began their retreat, Laila refused to leave without me. She died with her mother in an explosion that killed both instantly. I wasn’t there when it happened.

It had only been eight weeks, and I still frequently had my moments of pain and frustration. The news that Randal Divine had succeeded Larissa Divine as the Angels’ new leader, Terry returning to active mission status, and all these recent false alarms weren’t helping me in the least.

The panic alarm still refused to stop. What was taking Alia so long?!

I was about to go to the safe room myself to see what the problem was when the alarm finally went silent.

Sighing, I walked back to the dining room to finish carving up the turkey so that it would fit in the refrigerator. Cindy and Terry would be fed on leftovers for the rest of the week.

Alia came back to help me, and I asked, “What took you so long?”

“They didn’t answer,”
replied Alia’s voice in my mind.
“I mean, it took more than a minute before anyone said anything to me.”

The security people were usually immediate in their response, and with good reason. Cynthia Gifford, our surrogate mother, was the only psionic hider who could create a hiding bubble large enough to cover the entirety of the Guardians’ psionic city, New Haven. Within her invisible bubble, psionics couldn’t sense one another’s powers, making it nearly impossible for Angel spies to gather information on our settlement. Known among the Guardians as the Heart of New Haven, Cindy was second only to Mr. Baker himself on the priority list of New Haven’s security forces.

And yet Alia had to call on the safe-room intercom for a full minute before they even responded?

My sister followed on my heels as I jogged to the safe room and hit the intercom button.

“Gifford residence safe room to NH-1 Security,” I said into the microphone.

There was no answer, so I repeated myself.

“What’s going on, Addy?”
Alia asked in a worried tone.

“I’m not exactly sure,” I said quietly. “This one just might be for real.”

The last and only time a real alert was issued so far was when a pair of Angel puppeteers (mind controllers who could control people’s bodies) hijacked two innocent civilians and used them to attack our building. That was back on New Year’s Eve, and it was hardly a real threat to us. Though the puppeteers were never caught, their puppets never made it past the lobby.

I called the security team through the intercom again, and finally a voice answered, “NH-1 Security to Gifford residence. Identify please.” I didn’t recognize the voice, but that wasn’t uncommon.

“Roger that,” said the voice. “Is that Hansel?”

Ever since my argument with Mr. Baker over his demand that I remain an Honorary Guardian Knight in order to protect his reputation, I adamantly refused to answer to my old call sign. After what I had seen of the conflict between the Guardians and the Angels, I had concluded that while I was probably still better off with the Guardians, I no longer wanted to be a part of their 700-year-old war.

“Adrian!” I shouted. But then I wondered why this security officer would ask to confirm my call sign after hearing my real name.

“What’s going on?” I asked into the microphone. “Is this one for real?”

Chances were, it was. Probably another suicide attack. Alia and I were safe up here.

“Negative,” said the voice. “False alarm. Knights will be up shortly to double-check.”

Alia looked at me anxiously.
“Addy?”

I heard the front door open and Terry’s voice called out, “Cindy! Adrian! Alia! Where are you?”

I rushed back to the living room where I found Terry standing by the front door, panting heavily. Terry was a born and bred warrior who, despite having lost her left arm just below her elbow, was one of the toughest Knights in all of New Haven. Rarely did I see her out of breath. Had she decided not to wait for an elevator car and instead sprinted up the forty floors to our penthouse?

Playing by Heart by Anne Mateer
Give In To Me by Lacey Alexander
The Aviary by Kathleen O'Dell
Rise Against the Faultless by Hardaway, Melissa
Holiday Hideout by Lynette Eason
Dear White America by Tim Wise
A Duke's Wicked Kiss (Entangled Select) by Kathleen Bittner Roth
Herbie's Game by Timothy Hallinan
Summer of the Midnight Sun by Tracie Peterson
Touching Evil by Kylie Brant