Read The Reward of The Oolyay Online

The Reward of The Oolyay 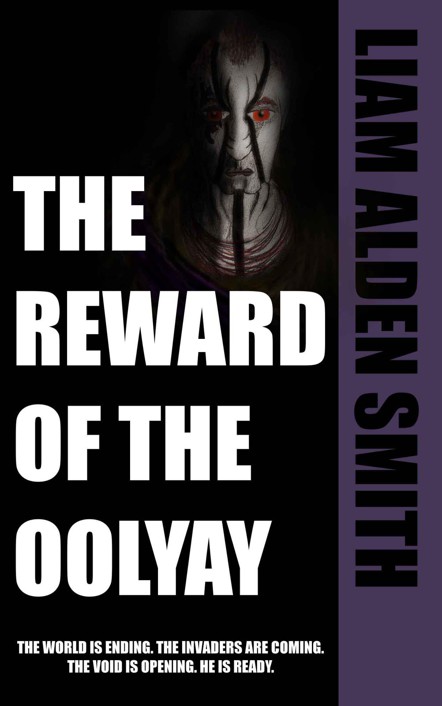 The Reward of The Oolyay

QOL 1: STANDBY OFFICER TO QOL 2: “ANY CLARITY ON UNIDENFITIED OBJECTS?”

QOL 3: INTELLIGENCE OFFICER TO QOL 2: “INFORMATION TRANSMITTED TO QOL 3, CONTINUE MONITORING, WILL TURN THIS OVER TO QOL 5 IMMEDIATELY.”

. HIGH-OUTPUT FISSION DEVICES MAY ONLY BE USED IN ORBITAL COMBAT, FURTHER COORDINATION WITH QOL 5 REQUIRED FOR SURFACE-TO-SURFACE COMBAT.”

A crowd of Vesh stood at the peak of a cliff face that overlooked The Ulgayir, the temple around which a great and ancient town had brought its might to bear. The residents pushed together, abandoning their Ijsquin flocks and pressing their bodies tightly into formation to witness the sky’s omen. Their listless eyes, made tired by ages of warfare and sacrifice, lost their apathy and scanned the cold, crisp clouds as the burning, floundering carcass of a colossus emerged into the atmosphere,. A great ship, having traveled from many star systems away, pivoted unnaturally for its hexagonal structure, bearing pockmarks the size of villages on its side. The eye took a moment to realize its immense size as it burned and fumbled through the ostensibly viscous air.

The vessel shed massive pieces of tumbling wreckage down onto the spanning savanna where its trajectory was set, but its descent was altered and hesitant. It seemed to hang in the air, fighting to stay afloat in the atmosphere, struggling to avoid the ground speeding closer and closer beneath it. The villagers, safe from the impending cataclysm, watched the catastrophe unfold as if in slow motion.

The Seeker, Inlojem, watched in silence. He was surrounded by his fellow villagers as their fire-red eyes lit up with excitement, contrasting intensely with their starkly white skin. His own eyes were old and sunken, having lost the vibrancy of a youth to look dull against the tones of his aged body. The two narrow, vertical black stripes on his face were graying and cracked, but they still framed his wrinkled lips. His lips were merely the edges of a slit; cracked skin folding in on itself until a mouth was apparent. Below the Seeker’s patchy robes was a body covered in tattoos telling the story of Inlojem’s life. The thin, coarse, red hair that typically traced the crooked oval of a Vesh’s head had receded to mere stubble the back of his skull. His age was slowly decaying him, like an inevitable plague. All he felt was fascination at its perpetuating advance.

For Inlojem the world was ending just in time. He watched the ship erupt into a massive mushroom cloud that enveloped the distant plain and bubbled its flatness into a boiling crater. He felt the dulled blast of the impact waft through the crowd from the expanding shock waves. Inlojem had seen enough; he knew they would want to speak to him at the temple. Perhaps they would blame him- say that Fio Rij Hagayal demanded sacrifice and his unwillingness to do so had invited intruders. But it was unwise to try and fool a Necrologist, especially one who carries a sickle-dagger and knows of many poisons. It is even more unwise to try to fool an old man, whose faith in rituals has been exterminated by the endless practice of the same.

Inlojem was not afraid of them; they were just Hagayalick fools- new Necrologists with new values, blaming the old Necrologists for their own disdainful attitudes.
Collaborators
, he thought bitterly as he climbed down the ancient step-well, carved of volcanic piryx.

The old Necrologist gripped the grooves in the ash-slate cliff rock as more shock waves from the explosion blew traces of dirt across the glossy piryx surface of The Ulgayir. As he thought it, he walked past a military officer whose foreign symbols read '
Uyor Seviogn'
, the name of this world’s oppressors; they were the ones who had delivered this world: Veshmali from obedience to a deity and replaced it with obedience to brute force.

He heard the soldier mutter to another near him:

Inlojem believed in one force: the Oolyay, and that force had abandoned him just as he believed it would. The Oolyay was The Nothingness and its master was The Deity of Torment and Irony, a deity that cannot be abandoned. If one attempts to leave the faith, the Oolyay will drag them back in. If one is pious to The Void it will close itself off from him and he will only be left with ritual. Inlojem had always been faithful until now. Ironically, this was when The Oolyay decided to crack open the sky and pour down upon the world of Veshmali its ultimate judgment. He stopped for a moment, halfway down the piryx step-well and spoke aloud into the burning, ashy breeze from the Oolyay’s gift, “Let them come, I am ready.”

The old town was swept up with the brimming roar of military engines, tuned efficiently and running clumsily as transport trucks flooded the dirt-blasted plains. Female Vesh and their children were loaded into the trucks to head south toward the city of Qol, the military fortress of secular civilization whose insidious tentacles had grasped this conflicted holy land. The journey from the cliffs was an hour’s walk, and in that time this flood of unwelcome guests had come to scoop up these Hagayalick pests and shoo them off to safety behind the sacred walls of an old fortress that would not stand. The Necrologists of Hagayal would flee and their followers would prance around them, bowing to them, and more Vesh prisoners would be sacrificed in their name to stave off the intruders, if only temporarily.

The feud between the Oolyayns and the Hagayalicks was an ancient tradition. Although it no longer officially existed, the hatred of each religion still bubbled in the eyes of its followers. When soldiers were absent, an Oolyayn would be beaten in the streets by violent Hagayalicks, or a Hagayalick household would all die of food poisoning just before an Oolyayn Necrologist would casually disappear from the village. This was how it had been since this belief in Ihio had cropped up several centuries ago - madness and bloody violence, justified by the ideals of sacrifice. It was an insult to The Oolyay, an affront to the truly exploratory nature of death and life that Necrologists like Inlojem held dear. The Oolyayns had not been ones to burn villages and slaughter their enemies, or to expand across the land and convert the unwilling. They had to learn how to be monsters, in order to fight the monsters of the Fio Rij Hagayal.

When the boots of godless soldiers trod into the land of glory and death, the petty quarrels over each religion’s nuanced perspective of death became null. With the arrival of the Uyor Seviogn, uniformed Vesh marched down the streets of ancient cities and pumped sixty rounds at a time into those who refused to surrender. They launched guided missiles into the stone-and-mortar walls of the old kingdoms and stuck flamethrowers into the holes. Oolyayns and Hagayalicks stood in storerooms, fumbling with the guns they had rejected in the past - asking rebels from other oppressed countries how to use them.

Now, even though the days were turbulent, any thoughts of planned rebellion were over. Concession and defeat had taken a choke hold on the heads of each religion, as the Oolyayns lost beloved Necrologists and the Uyor Sevoign threatened to expand North and find Terminus - the heart of the Oolyay. The Hagayalicks received similar ultimatums, but with fission weaponry positioned on the borders of their countries. The world’s sovereignty was dropped into the hands of the Uyor Sevoign, and the Oolyayns and Hagayalicks had to be quiet, smile and pretend to like it if they wanted to keep The Void sacred.

What fools
, thought the old death-priest as he neared his old Ulgayir, as glossy as the day it was built three thousand harvests ago. As his old aching body climbed the steps he felt a small but fleeting sense of pride in that his legs still functioned perfectly, and his strong calves swelled. Across the grand pyrix threshold stood a heathen death-priest that was called The Stranger, Ilquast, dressed in neat black and gold robes: gold, the color of a past heresy. His face was smooth and tender, with the shiny black stripes of a royal, pampered Vesh running down his face and between his blood red eyes.

“You arrive
with haste!
It is to scorn me, I know it. You detest that I hold this temple from your insidious religion, so you mock me!” Ilquast spat at the old man, whose own stripes were dull and graying, and whose robe was far more traditional: sewn hides which dangled to his knees and a thick cuff of fur that hugged his shoulders. He wore a small violet insignia made from thatched cloth on his shoulder, dyed from the extract of the scleri flower.

“Indeed,” remarked Inlojem, smiling. “I mock you with my very presence.” The arrogant young purveyor of sacrilege gritted his teeth and turned his face away from Inlojem, his useless nostrils flaring and his eyes wide with suppressed rage. “Where is my master?” Inlojem asked, continuing to mock.

“No, you are an intruder - like those who have come from the sky and fallen dead upon our land. Go and meet them; maybe they will give you more respect than I,” Inlojem spat out with his assertion. The young death priest yanked his straight-blade from his wrist-pouch, but the knife came too late. Inlojem had already slid his sickle-dagger around Ilquast’s clearly delineated jugular veins and Adam's apple.

“I long to spill the blood of my enemy- just like you Hagayalicks…but I will not do it through
sacrifice
,” Inlojem hissed into Ilquast’s ear. He could feel Ilquast’s arm under his own elbow and pressed the tension out of it to force the heathen priest to drop the straight-blade on the ground. Inlojem slowly started to part the skin along Ilquast’s throat with his sickle-blade until he heard the voice…

“Inlojem,” commanded the guarded, baritone voice, “lower your weapon.” Around Inlojem, Hagayalick figures began to emerge from the shadows of the temple, with straight blades at the ready and dipped in yellow poison. Hesitantly the young Necrologist was released from the old one’s grasp, and Ilquast clasped his throat having, until this point, taken its completeness for granted. Warm, purple blood seeped through his fingers.

“You know not to punish the Hagayalick, we have been allowed to keep this shrine,” the voice continued as it revealed its host, emerging from the deep darkness of the temple.