Read The Search For A Cure Online

The Search For A Cure 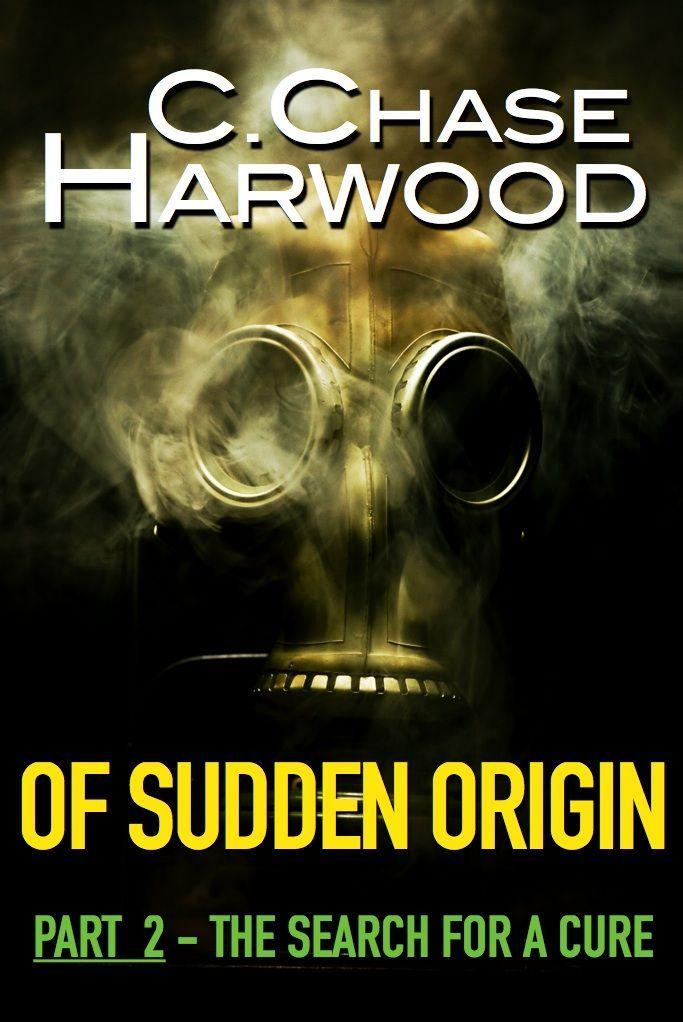 - Part 2 The Search For A Cure

Chapter Eight - Fingers On The Fence

Thank you to my B-Readers, Mom, Leslie, Jane, and many others who don’t necessarily seek out genre fiction for the beach. Having the opinions of people who aren’t beholden to the genre helps make the work that much stronger. Richard Pine at Inkwell, gets a shout out for timeless and thoughtful advice that has helped make me a better writer.

I am most especially grateful to my editors, Chance, Peter, Robert and Tony. Your insight is invaluable. You keep me from looking the fool.

Of Sudden Origin - Part 2 The Search For A Cure

All rights reserved. No part of this publication may be reproduced, stored in a retrieval system, or transmitted, in any form or by any means, electronic, mechanical, photocopying, recording, or otherwise, without the written prior permission of the author.This ebook is licensed for your personal enjoyment only. This ebook may not be re-sold or given away to other people. If you would like to share this book with another person, please purchase an additional copy for each recipient. If you’re reading this book and did not purchase it, or it was not purchased for your use only, then please return to your favorite ebook retailer and purchase your own copy. Thank you for respecting the hard work of this author.

PART 2 THE SEARCH FOR A CURE

Dr. Robert Tran lay in bed, frustrated that his tiny opportunity to catch up on sleep was once again spoiled by his nagging subconscious. His brain had been tickling the back of his head for days. The researcher for the Centers for Disease Control knew the signs and it kept him awake with annoyed anticipation. The scientist in him suggested that he take a sleeping pill - a sleep-deprived brain being useless for dealing with a national pandemic. The
holy-shit-we’re-all-going-to-die-a-horrible-death normal human side of him said, “Sleeping pill? Are you nuts? You’ve almost got it.”

A songbird began singing outside the window of his trailer. It was still dark out, but the bird didn’t care and then another one joined it. Tran pulled his pillow over his head to block them out. He’d been crashing in this FEMA trailer outside the now Relocated-to-Ottawa CDC headquarters for three months. Ever since Atlanta was overrun, the race against time had taken up residence in a research park in the Ottawa suburbs. Tran was a member of the Bacterial Zoonoses Branch, which was charged among other things with scientific support for CDC’s terrorism preparedness and emergency response. In reality his job was (to use the CDC’s words)
Pathogen discovery and characterization of unusual bacterial pathogens and novel causes of critical illness and unexplained death
. Currently, the critical illness department was overwhelmed. No one was really sleeping, and to make matters worse, as the now partnered Canadian/American Government declared martial law, a food rationing system had just been brought into effect. Tran’s stomach gurgled at the thought and he sat up to get a drink of water while cursing the chirpy birds outside.

The trailer’s potable waterlines had been hooked up to an old galvanized pipe system and much to everyone’s annoyance there was no filter and no home filters to be had. The result was rusty water. To minimize some of the metal, he held a handkerchief over the glass and let the water slowly filter through - and that’s when he had it - the tickle in the back of his head turned into a eureka moment: The birds, the dirty water, the bacteria that riddled the brain of the infected, it all came together like the last successful turn of a Rubik’s Cube.

Turning on a light, he threw his glasses on and flipped open his laptop. First he brought up a map of the initial spread of FND-z. For each date that the infection jumped north, it showed a different color swath over the Southern Continental US. Somehow, the disease had overcome every quarantine effort the government, and even panicked but still organized citizens, had set up. Of course, now the thing was a self-perpetuating killing machine, wrecking any computer modeling that showed predictive behavior. In April the population density of infected had reached a tipping point beyond quarantine within the continental US. It was literally the last hope of North America that the final barrier, the Saint Lawrence Wall as it was now called, would hold.

Tran typed into the CDC database and pulled up the data for the migratory behaviors of North American birds. The Zoonoses branch also dealt with the Avian Flu (
if only this pandemic could be so insignificant
), and bird migration was a standard element in the research. He then began clicking on a list of bird species. Each click detailed the migratory patterns of that particular species. After several clicks he stopped on the Tree Swallow. Another click isolated only Tree Swallows migrating from southern Florida: and there it was, the migratory pattern preceded the quarantine breaks by a week at the most.

He highlighted various sentences in the bird’s description page:
Songbird white on the bottom, shiny blue-green on top. Outside the breeding season, the birds congregate into enormous flocks. Use many feathers from other birds in their nests built over or immediately adjacent to water. The Tree Swallow winters farther north than any other American swallow, its spring and summer breeding range covers most of the Northern US as well as Canada and Alaska.

The recurrent sound of bird chirps outside snapped Tran out of his search. He set down the computer and quickly started throwing on some clothes.

With a combination of excitement over his potential solution, to at least part of the puzzle, and a tremendous foreboding, over songbirds no less, Tran barged into the Zoonoses lab with a severe lack of coordination. The lab, actually the entire CDC and its Canadian counterpart, were on a twenty-four hour war footing. Sleep was an afterthought, as was food (until the rationing kicked in and reminded people that they had better eat when they could). Tran crashed into several stools and nearly knocked over some lab equipment as he set down his computer bag and notebooks.

Susan Chancellor and her assistant, Aaron Burnbaum, were standing in front of an electron microscope studying an image of live FND-z bacterium.

“It’s from a bird or bird related,” said Tran.

“A Tree Swallow to be exact.”

“Actually, we believe it’s from a variety of chicken. We think Cornish Game Hen. What makes you say Tree Swallow?”

Tran opened his computer and woke it up. He still had the screens up from earlier. “This thing is not some terrorist attack. It’s evolution at its best – or worst, depending on how you look at it.”

Susan and Aaron moved over to Tran’s computer and folded their arms in anticipation.

Tran continued, “We know that this bacterium made it into the human circulatory system via water. COTPER even confirmed this occurrence in municipalities with less regulated pollution controls. You know, like Miami’s Biscayne Bay aquifer. On any given day the folks in Miami have no idea where their water is coming from.”

“People who drank from that aquifer and became ill, were getting their water from wells or other non-protected areas upstream from purification plants.”

Aaron said, “You’re not telling us anything really new, Tran.”

“Bear with me,” said Tran. “The Tree Swallow builds its nest, in part, by using the feathers of other birds. In fact they have been known to do aerial combat with each other over falling feathers. What if you’re right and it
is
chicken, but what if the bacterium jumped to the Tree Swallow who was stealing the chicken’s discarded but contaminated feathers?” Tran felt rather proud of himself as he wrapped up that last sentence.

Susan said, “Hmm, I have to admit I kind of like it. However, it doesn’t explain avian/human transference.”

“The Tree Swallow nests primarily near to or preferably over fresh water. Birds have to poop. These birds poop in the water. Classic vector-borne to water-borne transference.”

Susan gave it some more thought then she nodded to herself. “It makes sense. I’m going to devote your team’s energy to it, Tran. Get them in here.”

“I think we’re going to have to devote everybody to it.”

“The Tree Swallow does most of its summer nesting in the Northern states and all of Canada. Based on conjecture only at this point, because this year’s migration studies are obviously shot, I’d estimate that they have already arrived in their traditional nesting grounds. I know what you’re going to say, the entire population of infection-free Canada is required to boil water, but I guarantee you there are folks in rural areas that are quite sure of the safety of their local, non-municipal water supplies and aren’t bothering with the boil order. It’s a guess of course, but I think we can assume that the Saint Lawrence Wall will be breached from within, and soon.”

Susan and Aaron went cold at the thought.

Director Louis-Gelding was briefed and was quickly convinced that Tran’s theory had more than merit. She ran it straight up to the joint chiefs where it was decided that a team of CDC scientists, along with a small platoon of Army Rangers, should be dispatched to Southern Florida with the intent to locate the suspected poultry farm. It was hoped that by finding the original super bug it could then be genetically altered to reduce or preferably eliminate its harmfulness. A vaccine of sorts then might be created that could help a human host fight off the little bastard. Unfortunately, this wasn’t going to save tens of millions of Americans who had already been infected. For those poor souls there was no hope. The brain damage was irreversible. Their only salvation rested in a quick death. The armed forces had a plan for that going in high gear. The assault would be the greatest clash of forces in human history. The preparations were enormous, not the least of which was the added burden of repatriating America's massive overseas military forces. The seemingly never ending Overseas Contingency Operation (aka, terrorist whack-a-mole), and the containment of China
had become an afterthought in America’s fight for life.

Tran, Susan, Aaron and five other CDC scientists packed preassembled gear for field-testing into a van. Until now, no one ever imagined that Florida would be a Hot Zone. All of the scientists had been flown to various South, Central American, African and Southeast Asian countries at one time or another. All the same, the routine was identical: A small amount of personal gear was allowed. Everyone made sure his or her hazmat suit was packed and ready to throw on before touchdown.

The vans pulled up to a small civilian airport, which was now occupied by the US Army. It was abuzz with activity as the scientists stepped out next to two big CH-47D Chinook helicopters. A captain dressed in battle fatigues barked out orders to a platoon of thirty-two Army Rangers, a squad of which was finishing loading a Humvee into one of the Chinooks.