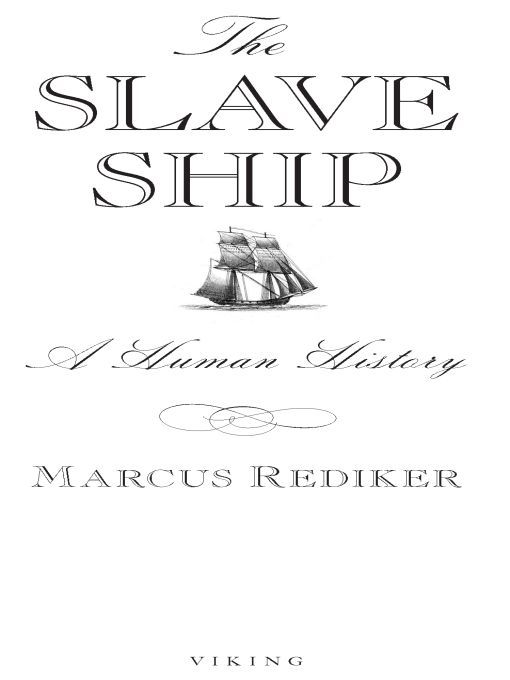 Table of Contents
Title Page
Copyright Page
Dedication
Introduction
CHAPTER 1 - Life, Death, and Terror in the Slave Trade
CHAPTER 2 - The Evolution of the Slave Ship
CHAPTER 3 - African Paths to the Middle Passage
CHAPTER 4 - Olaudah Equiano: Astonishment and Terror
CHAPTER 5 - James Field Stanfield and the Floating Dungeon
CHAPTER 6 - John Newton and the Peaceful Kingdom
CHAPTER 7 - The Captain’s Own Hell
CHAPTER 8 - The Sailor’s Vast Machine
CHAPTER 9 - From Captives to Shipmates
CHAPTER 10 - The Long Voyage of the Slave Ship Brooks
EPILOGUE
Acknowledgements
NOTES
INDEX
ILLUSTRATION SOURCES AND CREDITS
The Slave Ship
is truly a magnificent and disturbing book—disturbing not only because it details the violence and barbarism of the free market in human beings, but it reminds us that all actors in this drama are human, including the ship’s crew.
The Slave Ship
is not for the fainthearted, but like the millions who took this voyage in the past, we have no choice. We have to come to terms with this history if we want to understand how this modern, racialized and globalized economy based on exploitation came to be.
—Robin D. G. Kelley, author of
Freedom Dreams: The Black Radical Imagination

The Slave Ship
is a tour de force that conveys the reality of the slave trade more vividly and convincingly than ever before. I am sure that it will continue to be read as long as people want to understand a crucial episode in the birth of the modern world.
—Robin Blackburn, author of
The Making of New World Slavery

This beautifully written and exhaustively researched book gives us unforgettable portraits of the captives, captains, and crewmen who came together in that particular kind of hell known as the slave ship. This is Atlantic history at its best.
—Robert Harms, author of
The Diligent

Marcus Rediker is one of the most distinguished historians of the eighteenth-century Atlantic world, and he brings to the slave ship both an unrivaled knowledge of maritime labor and a deep theoretical perspective on the slave trade’s role in the rise of capitalism.
—Steven Hahn, author of the Pulitzer Prize-winning
A Nation Under Our Feet
This Atlantic epic brilliantly reveals the slave ship as a ‘vast machine,’ transforming its human cargo into slaves, and portrays precisely the variety of Africans, free and captive, in their choices and desperate struggles.
—Patrick Manning, author of
Slavery and African Life

Marcus Rediker, like the incomparable Herman Melville, understands both the immediate human drama and the sweeping global context of life aboard a cramped ocean vessel in the age of sail. He uses his unique gifts to take us belowdecks, giving a human face to the inhuman ordeal of the Middle Passage.
—Peter H. Wood, author of
Strange New Land: Africans in Colonial America

The Atlantic’s foremost historian from below has written a master-piece; we hear the shrieks of pain, the groans of loss, and uproar of rebellion. In the end, with ex-slaves offering amazing graces to discarded sailors, the cry rises up from this magnificent book for justice and for reparation.
—Peter Linebaugh, author of
The London Hanged
ALSO BY MARCUS REDIKER
Villains of All Nations: Atlantic Pirates in the Golden Age
The Many-Headed Hydra: Sailors, Slaves, Commoners, and the
Hidden History of the Revolutionary Atlantic
(with Peter Linebaugh)
Who Built America? Working People and the Nation’s Economy, Politics,
Culture, and Society,
Volume One:
From Conquest and Colonization
Through Reconstruction and the Great Uprising of
1877
(with the American Social History Project)
Between the Devil and the Deep Blue Sea: Merchant Seamen, Pirates,
and the Anglo-American Maritime World, 1700-1750

To Wendy, Zeke, and Eva