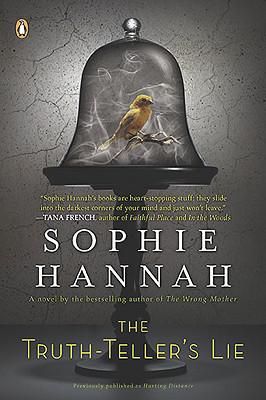 Sophie Hannah is the author of the international bestsellers
Little Face
,
The Wrong Mother
, and
The Dead Lie Down
. In 2004 she won the Daphne Du Maurier Prize for Suspense Fiction, and she is also an award-winning poet. She lives in Cambridge, England, with her husband and two children.

The Dead Lie Down

“A master of intricate plotting, Hannah seamlessly melds the police procedural with a gothic-inspired whodunit.”

“Hannah deals brilliantly with the issues of artistic accomplishment and success, unrequited emotion, revenge, and retribution. This stunning psychological thriller from the author of the equally outstanding
The Wrong Mother
has the complexities of love at its core.”

“This utterly gripping thriller should establish Hannah as one of the great unmissables of this genre—intelligent, classy and with a wonderfully gothic imagination.”

“Beautifully written and precision-engineered to unsettle.”

“A master class in plotting that adds twist after twist in a hectic finale.”

“Shockingly (and refreshingly) blunt riffs about the violent emotions of motherhood and the familial yearnings of men, along with chilling and darkly funny revelations about lust and loyalty, make this novel one of the season’s most absorbing reads.”

“Paced like a ticking time bomb with flawlessly distinct characterization, this is a fiercely fresh and un-put-downable read.”

“Sophie Hannah just gets better and better. Her plots are brilliantly cunning and entirely unpredictable. The writing is brilliant and brings us uncomfortably close to the dark, ambivalent impulses experienced by the parents of difficult, demanding children.”

“Sophie Hannah’s ingenious, almost surreal mysteries are so intricately constructed that it’s impossible to guess how they will end.”

“
The Wrong Mother
is Hannah’s most accomplished novel yet. As the revelations tumble forth, the tension is screwed ever tighter until the final shocking outcome. Exemplary.”

“Dark psychological suspense . . . The power this novel packs derives from narrators that play fast and loose with what they know. . . . The solution is a stunner.”

“Sophie Hannah . . . delves successfully into moral quandaries: What does motherhood mean? What should a mother do when she thinks her child is in danger—especially if her own family doesn’t agree? . . . It’s Alice’s choices and their consequences that make
Little Face
so compelling.”

“Few authors play with reality and perception as skillfully as Hannah does. . . . Riveting reading.”

“Echoes of
Gaslight
and
Rebecca
. . . a tautly claustrophobic spiral of a story delivered with self-belief.”

“The author is a poet by trade and she brings a wealth of psychological and literary subtlety to bear in this impressive novel. Smart and disarmingly unnerving.”

“A chilling thriller. I was left thinking about the book for days, and that’s usually a good thing.”

For Lisanne with love

First published in Great Britain by Hodder & Stoughton, a division of Hodder Headline 2007
Published in the United States of America by Soho Press, Inc. 2008
Published in Penguin Books 2010

The scanning, uploading and distribution of this book via the Internet or via any other means without the permission of the publisher is illegal and punishable by law. Please purchase only authorized electronic editions, and do not participate in or encourage electronic piracy of copyrighted materials. Your support of the author’s rights is appreciated.

This is not my story. I’m not sure I want to share that, or my feelings, with strangers, on a website. It would seem phoney, somehow—phoney and attention-seeking. This is just something I want to say, and your website gives no address for submitting letters.

Did you ever stop to wonder, when you were thinking of a name for your organisation, whether speaking out is always the best thing to do? Once you tell somebody something, it makes it more real. Why take what you wish had never happened and make it happen again and again in the minds of everyone you know? I will never tell anybody my so-called story, which means there will be no justice, no punishment for those who deserve it. Sometimes that thought is pretty hard to take. Still, it’s a small price to pay for not having to spend the rest of my life being thought of as a victim.

Sorry, a survivor. Though that word makes me feel uneasy. At no point did anybody try to kill me. It makes sense to talk about survivors in the context of a plane crash or a nuclear explosion: situations in which it might be expected that everyone involved would die. But in most cases rape is not a life-threatening event, so the sense of rare achievement that the word ‘survivor’ conveys seems patronising—a sort of false consolation.

When I first logged on to your site, I hoped that something I read there would make me feel better, but the opposite has happened. Why do so many of your correspondents use the same cloying vocabulary: thriving, telling and healing, smiling through tears, rising from the ashes, etc.? It reminds me of the lyrics of a bad heavy-metal album. Nobody says that they do not ever expect to get over what happened to them.

This will sound terrible, but I am actually jealous of many of the people whose stories are posted on your site: the ones with insensitive, demanding boyfriends, the ones who drank too much on first dates. At least they can make sense of their ordeals. My attacker was someone I had never seen before and have not seen since, someone who kidnapped me in broad daylight and knew every detail about me: my name, my job, where I lived. I don’t know how he knew. I don’t know why he chose me, where he took me or who all the other people were. I will not go into any more detail than that. Perhaps if I did, you’d understand why I feel so strongly about what I’m going to say next.

On the ‘What Is Rape?’ page of your site, you list a number of definitions, the last of which is ‘any sexually intimidating behaviour’. You go on to say, ‘No physical contact needs to have taken place—sometimes an inappropriate look or comment is enough to make a woman feel violated. ’ When I read that, I wanted to hit whoever wrote it.

I know you’ll disapprove of this letter and me and everything I’ve said, but I’m sending it anyway. I think it’s important to point out that not all rape victims have the same mindset, vocabulary and attitudes.

The Bronski House by Philip Marsden
All Hallows' Moon by S.M. Reine
Town Square, The by Miles, Ava
Phantoms Can Be Murder: Charlie Parker Mystery #13 by Connie Shelton
A Vintage From Atlantis by Clark Ashton Smith
Professional Boundaries by Jennifer Peel
The Exiled Earthborn by Paul Tassi
The Other Brooklyn: Joey Toranetti Trilogy by Ieva, Bob
Doctor Who: The Zarbi by Bill Strutton
Flight of the Phoenix by Melanie Thompson