Read To The Grave Online 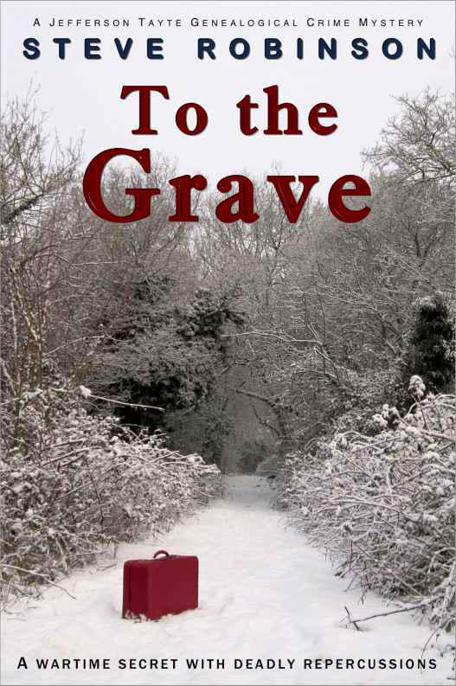 The right of Steve Robinson to be identified as the Author of the Work has been asserted by him in accordance with the Copyright, Designs and Patents Act, 1988

No part of this publication may be reproduced, stored or transmitted in any form or by any means without the prior written permission of the author.

The characters in this publication are fictitious.  Any resemblance to real persons, living or dead, is entirely coincidental.

J
efferson Tayte was sitting at the table in his hotel room, wondering how his latest assignment had come to this.  It should have been easy.  All he had to do was reconnect an adopted woman with her birth parents.  She’d even been able to give him a name and address, albeit as it was in 1944.  Now he was thousands of miles from home, staring into the barrel of a Walther P99 semi-automatic handgun.

“Head or heart?” the man sitting opposite him said.

Tayte had heard the question but he had to ask to make sure he’d heard it right.  The man didn’t say it again.  He just moved the muzzle of the gun slowly from Tayte’s chest to his head and back again.  He was a younger man, Tayte thought: early thirties, dressed in a navy pinstripe suit, shirt open at the neck.  And he was leaner, too, much leaner, and he would be all the more agile for it.

The man shook his head only slightly. “You wouldn’t make it out of your seat,” he said through thin lips that sat dead straight on his face.

Tayte tried to swallow but he couldn’t.  He knew he was going to die.  A part of him had known it the minute he’d walked into the room and saw this man sitting there.  They were both very calm about it and somehow Tayte wasn’t surprised by how he felt.  He knew it was going to happen.  They were resolved between them to kill and be killed.
Head or heart?
What kind of a choice was that?

“Not to me,” the man said.  He shifted as he adjusted the round, frameless glasses that were pinched to the bridge of his nose.  “But if you choose heart, there’s a small chance the first bullet will miss.  Your head on the other hand...”

Tayte tried to imagine what a head shot would be like.  Quicker perhaps, but what if the bullet went in through his eye?  He winced.  It didn’t bear thinking about.  He really did not want to be having these thoughts.

“I’m not going to tell you that you won’t feel a thing, Mr Tayte.  But this is not personal.  I’m not here to hurt you.  Either way, the pain won’t last long.”

Tayte turned away and looked out through the window, thinking that this man was as cool as the January night that had settled an early frost on the cars below.  He breathed deeply and wondered where the time had gone.  His time.  He thought how ironic it was that he should die a lonely man in some nondescript hotel room trying to connect another client with her birth parents while he still had no idea about his own.  How could he die without knowing who he was?  He scoffed, thinking that death would certainly spare him that pain.

How had it come to this?

“Head or heart?” the man opposite him repeated.

I
t was a Friday afternoon and Jefferson Tayte was with his client at her home in Washington DC, a few miles east of the capital and not many miles from his own home on the other side of the Potomac river.  They were sitting opposite each other by an open fireplace that had served to chase the January chill from Tayte’s fingers and toes since the heating in his much loved Ford Thunderbird had decided to pack up on him during one of the coldest spells he’d known in years.  The thin white shirt and loose-fit, tan linen suit he was wearing felt entirely inadequate.

He’d first met Eliza Gray two weeks earlier when she’d called his number from the advertisement he ran in the classifieds section of the Washington City Paper.  Assignments had been plentiful of late, if bordering on mundane at times, so when she’d told him that a suitcase had been sent to her with an anonymous note saying that the contents belonged to her real mother and that the sender thought she should have them, he called to see her right away.  The note said nothing more than that and it had come as something of a shock to Eliza because in all her sixty-six years she had no idea that she’d been adopted.  Her late, adoptive parents never told her.

That was one of the reasons Tayte had taken the assignment.  It was a little outside his usual routine, but he understood how Eliza felt and he wanted to help her fill the void he knew was growing inside her if he could.  The first thing he’d done was to prove the note’s claim that Eliza had been adopted.  He’d called his friend, Marcus Brown, an eminent genealogist who worked at the National Archives in London, and asked him to see if his client had an entry in the Adopted Children Register.  The index to the register was only available publicly on microfiche at six locations in England and Marcus had been happy to go along to the City of Westminster Archives Centre to check.

When Marcus had called back to say that he’d found Eliza’s index reference, Tayte downloaded the forms she had to fill in and they sent them off the same day.  A week later she attended a mandatory interview with a local adoption advisor and a few days after that she received two certificates.  The first was her amended birth certificate, which looked like a regular birth certificate but gave her adopted name, Elizabeth, and the names and address of her adoptive parents.  The second was a copy of her original, confidential birth certificate to which the amended record was linked.  It showed her original name of Virginia and no father was listed, which was as Tayte had expected.

The other reason he’d taken the assignment was the red suitcase that was beside him on the sofa, and if he was honest with himself his own intrigue around how and why it came to be there had got the better of him.  Eliza hadn’t kept the packaging, which was a shame because he knew it would have offered some clue as to who had sent it.

Tayte picked the suitcase up and set it down on his knees.  It was a small suitcase, like a child’s suitcase, and it put him in mind of the kind of thing he’d seen in the small hands of countless British evacuees in photographs taken during World War II.  It looked pristine apart from the dust that had settled a tacky grime into the locks and hinges, which over the years had tarnished the metal.  He thought it had to be at least seventy years old and it had that familiar, musty odour he knew could never be removed - although judging by its condition it had travelled very little.

“I wanted to take another look before I set off, Mrs Gray,” Tayte said.  “I hope I haven’t inconvenienced you.”

“Of course you haven’t.”  Eliza threw him a smile.  “And I thought we were on first name terms now.”

He thought she looked much younger than her years.  She had shoulder length, red-brown hair, a slim frame and youthful dress sense.  And he liked the energy she exuded as she spoke, despite everything that had happened to her in recent years.  He imagined she must have been a very active woman before the car accident that had taken her husband’s life and left her in need of walking sticks for the remainder of hers.  He found it easy to admire people like that, who kept smiling through no matter what.

“I’d like to take the book with me if that’s okay,” he continued, opening the suitcase.  “I thought it might help open a few doors.  You know, prove my authenticity should the need arise.”

“Go right ahead,” Eliza said.  “Take the whole suitcase if you like.”

Tayte laughed through his nose.  “That’s okay.  The book will do just fine.”

It was a pale pink hardback library copy of
Madame Bovary
by Gustave Flaubert.  It had been amongst the few layers of clothing that were in the suitcase with several personal items such as a hairbrush, a half used lipstick and other items of makeup, and a toothbrush wrapped in an off-white facecloth.  There was also a teddy bear with a button in its ear that read, ‘Made in England by Merrythought Ltd’.  The case seemed full of things that a young girl might not want to be separated from given the choice and it was the reason they had been separated that intrigued Tayte the most.

Eliza poured coffee from the percolator Tayte had helped bring in from the kitchen when he’d first arrived.

Tayte looked up from the book.  “No thanks.”  He patted his stomach.  “At least, I’m trying not to.”

Eliza’s smile broadened as she sat back again.  “So, tell me what you’ve managed to find out,” she said as she tried to get comfortable again.  “You wouldn’t believe how restless I’ve been since your last visit.”

Tayte thought he would, but he didn’t want to get into his own ancestry issues just now.  He opened the book and eyed the library card that was still inside the jacket.

“Philomena Lasseter,” he read aloud, and Eliza’s eyes grew wider at hearing what she now knew to be her birth mother’s name.