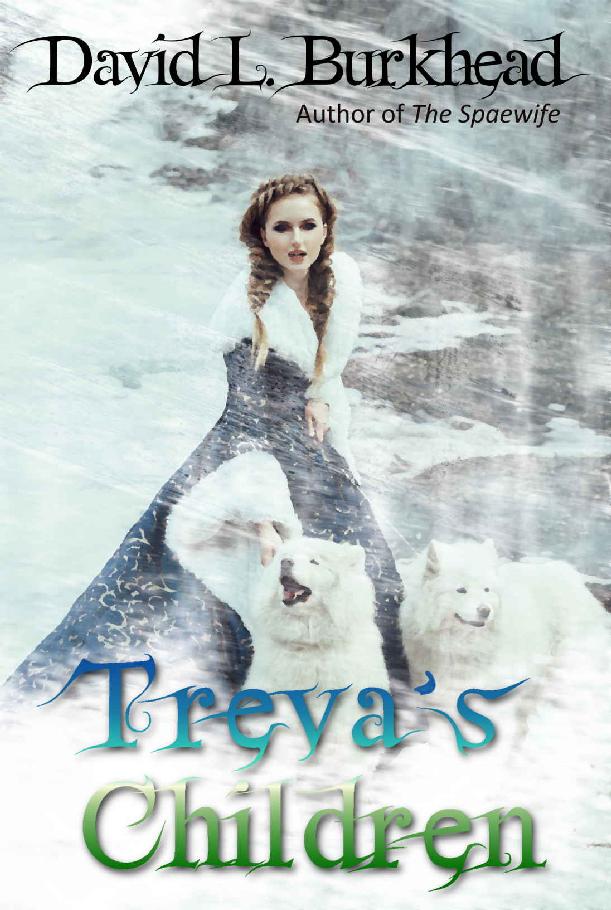 Cover design and layout by Cedar Sanderson, using an image from grape_vein, © 2015

Also in this series:

The wind howled down off the
mountain, blowing snow into Talisa’s eyes.  She pulled her ice-encrusted scarf higher over her face and held up a hand to block the tiny frozen daggers. On the slope below the few remaining people of her household struggled single file through the knee deep snow.

“Milady!” Embron, her huntsman, shouted over the roaring wind. “We need to find shelter and build a fire.”

“This storm will kill us all,” Embron said.

Talisa found herself smiling despite their plight. Embron had grown bold in the last few days. “There are many ways to die, Huntsman.  Some better than others.”

Embron shielded his eyes and stared through the snow back the way they had come, as if to conjure an image of their pursuers. “The storm will have covered our trail.  Perhaps...”

Talisa considered. “And if you are seen?”

Embron bowed. “Then I will lead them away.  But I will not be seen.”

Talisa smiled again. “No, I suppose you will not.  Very well.  We will take shelter in the next copse...and build a fire.  I rely upon you.”

Embron bowed again and then hastened down their back trail.  The pine boughs tied to his feet allowed him to walk over the snow.  She turned and trudged down the hill, wishing she could use Embron’s trick.  Every time she tried, she tripped over the branches and fell.

“Kailin!” she called when she neared the first of the group.

“Next stand of woods, Kailin,” Talisa extended her arm in the direction of their march. “We’ll take shelter there.  Hang on that far.”

Talisa stood by and waited as each of her remaining people passed.  To each one she offered a few words of encouragement, telling them that soon they could rest.  When the last had passed, she turned and followed in their wake.

Talisa did not know how much time passed as she marched.  The sky grew dark, whether from thickening clouds or the setting sun, she did not know.

She blinked.  Something was wrong.  She looked down.  The snow ahead of her was unbroken.  She shook her head and turned around.  There.  The column of people had turned.  She trudged back through the snow and followed them toward a small stand of evergreens.

The trees blocked most of the wind.  Only a light dusting of snow drifted into the wood.  Talisa wiped at her face, feeling ice crystals flake off her eyebrows.  She bowed her head and leaned against one of the trees. “Thanks be unto you, Koreb and Mira, in granting us the strength to reach this place.  And Holy Treva, I give thanks to you that this copse be here in our time of need.  I beg you to be with us, and to strengthen me and grant me wisdom as I try to protect my people.” She kissed her fingers and touched them to the tree, then stood and walked deeper into the wood, following the people of her household.

The wind died down as she moved deeper into the woods although she could still hear it groaning through the treetops.  She ducked under a branch and entered a small open area, not large enough to be called a clearing.  It seemed to be large enough for everyone.

“Everybody,” she called. “Back here.”

Word passed up the line and people started trickling back.  Talisa counted as people gathered around her.  Fifteen.  Her gaze fell on a boy, Embron’s son. “Marek?”

She looked him up and down.  Ten summers and already he assisted with Embron’s duties as huntsman. “Run ahead.  See if anybody didn’t get the word to gather back here.  But don’t go too far.”

"Shago!" Talisa pointed. "Keep those dogs on a tight leash.  You know what will happen if they get loose, and the Schahi find them."

“Ranthar,” Talisa said, indicating one of the other men, “Take two other men and cut boughs from these trees.  Pile them between the trunks around here.” She held up one finger and moved it in a circle.  Give us some more shelter from the wind and maybe hide the fire from the Schahi if they get this far.”

“Milady.” Ranthar too bowed.  He touched two others on the shoulder.  The three spread out and began hacking at low hanging branches.

“Fire.” Talisa smiled and nodded. “Mo-an, dig a pit--“ She pointed at the center of the open area. “--there.  Make sure it’s down to bare earth.  About this big.” She held her hands up about shoulder width apart. “The rest of you, gather branches, as much as you can find.  Pile them--“ she looked around the open area, picked a spot, and pointed. “--there.”

As her people scurried about their tasks, Talisa leaned against a tree.  She wanted to sit but more she did not want her people to see her taking her ease while they worked.  She looked around the open area, trying to think what she might have missed.  Water?  With the snow, that would be no problem.  She could send someone for it later.  What else?  She saw Mo-an, busy with his digging.  She nodded. “Mo-an!  When you have finished that pit, dig a short trench over there.” She pointed to a spot just outside the ring of threes.

Two more of her people arrived, followed by Marek.  Talisa set them to work gathering firewood.  She pulled her cloak tightly around her and shivered.  She had forgotten how cold she was.  While she waited, her mind drifted.  Her husband was off in the south, fighting the Schahi, her son, a new-made squire, in Norveth, the capital.  And her, all alone, trying to save what little remained of their household.

Banev stood in front of her "Milady, the fire's ready."

Talisa rubbed at her eyes and looked around.  Brush and pine branches piled between the tree boles formed a low wall, about shoulder high.  A small gap pierced the wall, in front of which the dogs lay.  Well trained, they would sound alarm if strangers approached too close and remain silent else.

The ruddy glow of the fire reflected off the overhanging trees. Talisa hugged herself and rubbed her shoulders.  Already the fire started to warm the small open area.  The survivors huddled close around it.

Talisa nodded and followed the girl to the fire.

Mo-an tended a pot over the fire. "Tea, Milady?"

"Has everybody had some?" Talisa asked.

Talisa turned her head to the left then followed around the circle of huddled people.  They were as comfortable, as safe, as she could make them right then.  She returned her gaze to Mo-an and nodded. "Very well."

Mo-an dipped a ladle into the pot and poured into a tin cup.  He handed the cup to Banev who brought it over to Talisa.

"Thank you, child." Talisa hissed as the cup almost burned her hand.  She brought her other hand to it and shifted her grip, allowing parts of her hand to cool while fresh spots of skin endured the heat.  She sipped at the tea, reveling in the soothing warmth.

Again she looked around the circle noting a missing face. "Embron?"

Marek spoke up. "Da 'haint come back yet."

"That he will, Milady," Marek beamed with pride. "Da be the best tracker in Aerioch.  No one can catch him.  Why, minds me one time..." His mouth closed with a snap.

Talisa chuckled. "Ah.  So the mystery of our poacher is solved.  Who would ever have suspected the Baron's own huntsman."

Marek said nothing.  The silence of the camp grew.  Fear?  Fatigue?  Both, probably, Talisa thought.  She opened her mouth to speak again when a low growl drew her attention.

She looked.  The dogs had risen, their heads low to the ground as they faced out the opening in the brush wall.  From his place in the circle, a place that put him close to the dogs, Shago hissed a low hiss that was almost a whistle.  The dogs' growls ceased, but they remained in their guarded posture.

From outside the camp a pattern of low whistles sounded.  Shago grinned and clicked his tongue against the roof of his mouth.  The dogs subsided.  Talisa rose and turned to face the opening in the wall.

Embron stepped out of the darkness, a deer carcass draped over his shoulders.  He turned sideways to fit through the opening.  He slung the carcass to the ground, its open body cavity gaping redly at them.

"Da!" Marek jumped up and ran to his father.  Embron swept the boy up in his arms, heedless of the blood that stained his sleeves.

Talisa smiled. "I am glad to see you, Huntsman.  When you did not return, I worried."

He grinned. "The storm covered our track well enough.  I laid down a false trail.  That should confuse them for a time." He shrugged. "Eventually, they'll spread out, maybe find us again.  But I think we can rest a while." He grinned. "And I thought we could use some meat."

"My husband's ever loyal huntsman." Talisa smiled. "Thank you."

Before Talisa could move, others grabbed the carcass and hauled it to the side of the fire where they began the task of skinning and butchering it.

After eating, Talisa wrapped herself in her cloak and curled up on the ground to sleep.  Just before awareness fled, she heard Embron giving orders to set watches. My husband's ever loyal huntsman, she thought.
My
ever loyal huntsman.

Morning brought quiet. Talisa opened her eyes.  Aside from the popping of the fire and the occasional rustle as someone move in his sleep, no sound broke the air.  She rolled to her feet and stood.

The dark did not seem so deep as when they had taken shelter in the copse.  Embron squatted by the opening to their rude shelter, one hand draped over the head of one of the dogs, idly scratching behind its ear.  The dog’s tail thumped rhythmically against the ground.

Embron stood.  The dog whined as Embron’s hand left its ear.  Embron clicked his tongue and the dog subsided, lowering its head to rest on its paws. “Milady.”