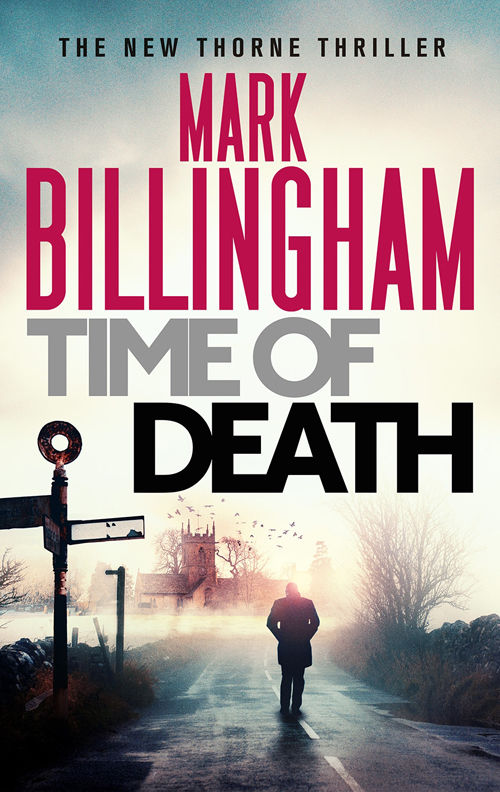 No.1 bestseller Mark Billingham has twice won the Theakston’s Old Peculier Award for Best Crime Novel, and has also won a Sherlock Award for the Best Detective created by a British writer. Each of the novels featuring Detective Inspector Tom Thorne has been a
Sunday Times
bestseller, and
Sleepyhead
and
Scaredy Cat
were made into a hit TV series on Sky 1 starring David Morrissey as Thorne. Mark lives in North London with his wife and two children.

Part One: All Lovely and Screaming

For Caroline Braid. She knows why.

He’s
sitting in the only half-decent café there is, drinking tea and picking at a muffin, when he sees the car slow down and pull over to the kerb on the opposite side of the road, and watches a girl, just like the one he’s been thinking about, walk up to it, smiling, as the passenger window glides down.

Of course she’s smiling, she knows the driver.

Why wouldn’t she smile?

Now, she’s leaning down towards the open window. She tosses her hair and grins at something the driver says; pushes her shoulders back, her chest out. She nods, listening.

He finishes the muffin, closes his eyes for a second or two, enjoying the sugar rush. The rush upon the rush. When he opens them again, the waitress is hovering, asking if she can take the empty plate away, if he needs another tea.

He tells her he’s fine and says, ‘Thank you.’

She knows his name of course and he knows hers. It’s that kind of place. She starts to talk, high-pitched and fast, something about the river that has burst its banks again a dozen or so miles away, how terrible it must be for those poor people living nearby. All that filthy water running into their living rooms. The stink and the insurance, the price of new carpets.

He nods at the right moments and says something in return, one eye on the car and the girl, then looks at the waitress until she takes the hint and wanders away with his empty plate.

The girl stands up and steps back on to the pavement, casts a glance each way along the street as the driver leans across and
opens the passenger door. Even though she knows him, trusts him, she knows equally well that she shouldn’t get into his car, not really. She’s not worried about anything bad happening, nothing like that would ever happen here. She probably just doesn’t want to be seen doing it, that’s all, doesn’t fancy the dressing-down she’ll more than likely get from the ’rents later on.

Cradling his mug, he inches his chair a little closer to the window and watches without blinking. He’s enjoying her few seconds of caution, and the fact that it
is
only a few seconds, that there’s not really any good reason to be cautious, makes him think about what it’s like to live here, just how long it’s been since he moved out of the city.

The reasons he came to this place.

A jolt to begin with, no question about that. A city boy all his life, then waking up to the whiff of cowshit. Birds he couldn’t name and bells singing from fields away and several weeks until he realised that the sound he
wasn’t
hearing was the blare of car horns from drivers every bit as stressed out and pissed off as he used to be.

The feel of the place though, that was the main thing. The community spirit, whatever you wanted to call it. It was what he supposed you’d describe as tight-knit … well, relative to what he’d been used to anyway. The people here weren’t living in each other’s pockets, not exactly, but they were aware of one another, at least. The size of the place has a lot to do with it, obviously. With that closeness and sense of concern. With the whispered tittle-tattle and the perceived absence of threat.

There was still trouble, still drunks around on a Friday night, of course. There was no shortage of idiots, same as anywhere else, and he knew that one or two of them could easily have a knife in his pocket or might fancy taking a swing because they took a dislike to someone’s face. But it hadn’t taken very long
before he knew most of their names, who their friends or their parents were.

Her head goes back and he can see that now she’s laughing at something as the driver flicks the indicator on and checks his mirror. She reaches for the seatbelt like the good girl she is. Like the good girl all her friends, her teachers up the road at St Mary’s, her mum and dad and brother know her to be.

That’s how it is here. It’s why he likes it.

He drains his mug and turns at the door to wave and say goodbye to the waitress, before stepping out into the cold and standing beneath the awning, buttoning his jacket as he watches the car disappear around the corner.

It’s the sort of place where everyone knows everybody else’s business.

But they don’t know his.

PART ONE
ALL LOVELY AND SCREAMING
ONE

‘So,
a big Sunday roast?’ Thorne had asked. ‘That kind of thing?’

‘And a cream tea on the Saturday with a bit of luck.’

‘No mooching around in antiques shops.’

They stopped, holding their breath as they listened to Alfie coughing in the next room. Thankfully, he stayed asleep.

Thorne adjusted his pillow. Sniffed. ‘A decent pub with a toasty fire.’

‘I bloody well hope so.’

‘And definitely no walking?’

Thorne had grunted cautiously and pulled Helen closer to him, thinking about it. ‘Just the weekend though, right …?’

Now, on their first night away, a month after those tentative and delicate bedtime negotiations, walking back to their hotel after dinner in a more than decent pub, Tom Thorne decided that he’d got off reasonably lightly. It had taken a good deal of organisation, not to mention the calling in of several favours from sympathetic colleagues, to co-ordinate the holidays they
were both due and he knew that Helen had been angling to spend at least a week of it holed up in the Cotswolds.

She shook her head. ‘You miserable old git.’

Thorne could see the sly smile, but had no way of knowing that Helen Weeks too thought she’d had a result. Thorne was not the most adventurous of souls. He was still uncomfortable spending time south of the Thames, so she knew that, given the choice, he would rather stick needles in his eyes than spend precious free time in the countryside. Just hearing the theme tune to
The Archers
was normally enough to give him the heebie-jeebies.

All things considered, she had decided that a weekend – a
long
Valentine’s Day weekend – was a fair return for the time spent trying to persuade him that it would be good to get out of the city for a few days. A few days on their own, before they’d head off somewhere good and hot for a week; a nice resort with a toddlers’ club, where they could really kick back and do sweet FA until they were due back on the Job. The ‘no walking’ agreement had been a sacrifice she was prepared to make and the somewhat contentious ‘mooching’ issue had been worth giving ground on. That said, she had her walking boots stashed in the boot of the car and there
was
a nice-looking antiques shop on the main road. Helen took a gloved hand out of her pocket and put her arm through Thorne’s. She felt quietly confident that the four-poster bed that was waiting for them back at the hotel might lead to the re-opening of discussions.

They turned on to the cobbled side street that led to their hotel. Halfway along, a middle-aged woman passed by with a spaniel that appeared to be feeling the cold every bit as much as
Thorne and Helen were. Thorne smiled at the woman and she immediately looked away.

‘See that?’ Thorne shook his head. ‘I thought they were supposed to be friendlier in the countryside. I’ve met serial killers who were friendlier than that. Sour-faced old bag.’

‘You probably scared her,’ Helen said. ‘You’ve got a scary face.’

‘If someone doesn’t know you, that’s all I’m saying.’

Helen was grinning as Thorne stepped ahead of her and shouldered the front door of the hotel open. ‘Those are your good qualities.’

Inside, Thorne smiled at the teenage girl behind the reception desk, but did not get a great deal more in return than he’d got from the old woman with the dog. He shrugged and nodded towards the small lounge bar. ‘Quick one before bed?’

‘I think we should head up,’ Helen said. ‘Maybe have a quick one
in
bed.’

Disgraceful Archaeology by Paul Bahn
The Pretty One by Cheryl Klam
Hot Off the Red Carpet by Paige Tyler
How Can You Mend This Purple Heart by T. L. Gould
Suited to be a Cowboy by Nelson, Lorraine
Access Granted by Rochelle, Marie
Pleamares de la vida by Agatha Christie
Believing Binda by Khloe Wren
The Truth by Erin McCauley
Summer on the Short Bus by Bethany Crandell