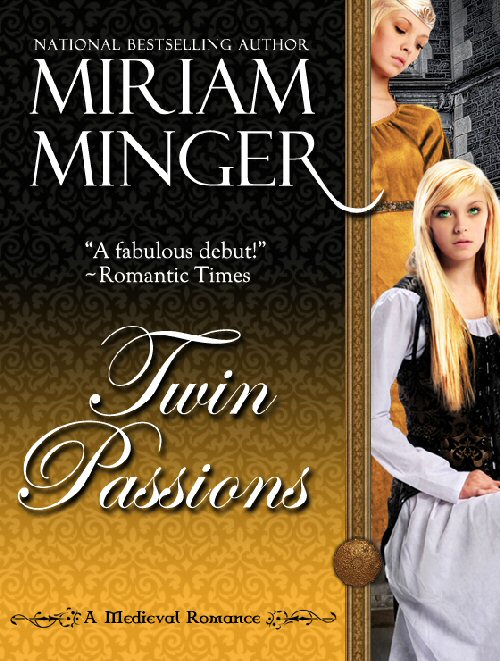 “Miriam Minger is a master storyteller who illustrates
the full gamut of emotions felt by her characters
.

Emotions so strong that you are pulled
into the pages and into their lives.” – Inside Romance

With the exception of quotes used in
reviews, this book may not be reproduced or used in whole or in part by any
means existing without written permission from the author.

This is a work of fiction
.

Any references to historical events,
real people, or real locales are used fictitiously
.

Other names, characters, places, and
incidents are the product of the author’s imagination, and any resemblance to
actual events or locales or persons, living or dead, is entirely coincidental.

Other Electronic Books by Miriam Minger

A Hint of Rapture

"'Tis not safe for you to venture out alone, my
lady," murmured the shy young stableboy, almost to himself. Biting his
lower lip, he fumbled nervously with the leather girths of the saddle. Surely
Earl Godric would not allow one of his daughters to ride out of the stronghold
without a guard to protect her. Perhaps he should offer to ride along with her?
That thought made him flush bright red from his neck to the roots of his scalp.
He shifted his feet uncomfortably, sensing her impatience, but for some reason
he could not fasten the last buckle properly.

"Here, let me do that," Gwendolyn said in
exasperation. She knelt down beside him, her expert fingers deftly threading
the leather strap through the metal buckle. "There, now," she
muttered, satisfied. Rising to her feet, she brushed the straw from the knees
of her buckskin trousers. She looked steadily at the startled stableboy, her
emerald eyes searching his ruddy face. "You must be new to the stables,"
she said. "What is your name, lad?"

"G-Garric, m-mistress," he stammered,
awestruck by her fair beauty. For the life of him he could not understand why
such a fine lady was dressed in men's clothing almost as simple as his own. He
looked down at his feet, fearful that she would think his gaze far too bold. "'T-tis
my first day in the stables, my lady."

"Well, Garric, look over there," Gwendolyn
said, lifting the stableboy's trembling chin. She nodded toward the far end of
the darkened stable.

His eyes widened as he recognized two of Earl Godric's
most trusted thanes. The men were quickly saddling their horses, taking care to
glance over at Gwendolyn every so often to make sure she had not yet left the
stable.

"Though I am quite capable of watching out for
myself," she stated, her emerald eyes flashing defiantly, "
my
father insists that those two thanes ride along with me
whenever I leave the stronghold." She lowered her voice, her tone
softening as she smiled at the boy. "So, you see, Garric, your fears are
for naught. But I thank you for your kind concern."

A slow, creeping blush burned the stableboy's freckled
cheeks as he stared at her, his heart beating hard against his narrow chest. He
had never been gifted with such a smile before! A look of embarrassment crossed
his face. Suddenly he turned and fled from the stable, the hearty laughter of
the two thanes ringing in his ears.

"Lady Gwendolyn has power over us all." The
burlier thane grinned at his companion.

"Aye. Just like her sister," agreed the
other, chuckling to himself. With a sharp yank on the reins, he urged his steed
forward and followed Gwendolyn, who was leading her dappled mare into the
stable yard.

Once out in the open, the frisky mare nudged her
mistress with her velvety nose. She whinnied expectantly, as if to speed them
on their way. The cool autumn afternoon seemed to beckon to them. Without even
a backward glance at the two thanes, Gwendolyn slid easily onto the mare's
back.

"We'll soon be free, my Arrow," she whispered
softly, spurring the mare gently with her heel.

Passing through the protective walls that surrounded
the stronghold of her father, Earl Godric of Cheshire, Gwendolyn reined in just
outside the heavy, timbered gate. The main road before her led through open
fields, rich with the bountiful autumn harvest. To her right lay a smaller path
that wound toward the river through dense, forested woodlands. With little
hesitation, she chose the less traveled path to the river. She had not been for
a ride in several days, and yearned for nothing more than to be alone for a
while. Well, almost alone, she thought darkly, remembering the two silent thanes
who were riding not far behind her. Clucking her tongue to her mare, she set
off at a lively canter.

The late-afternoon sun was just beginning to settle
into the gnarled oak trees. The brisk air was tinged with the sharp, pungent
scents of autumn— damp earth, smoky wood fires—and Gwendolyn took in great
breaths, filling her lungs. She loved this time of year, when the entire
landscape was awash in vivid hues of crimson, orange, and russet.

Suddenly she sighed. It would not be a long ride today,
for the hour was later than she had thought. She glanced over her shoulder at
the two thanes wending their way along the leaf-strewn path not far behind her.
They reminded her of great, hulking shadows. No doubt they would soon ride up
and urge her to turn back.

She shivered, turning up the collar of her woolen shirt
against the brisk north wind. She was grateful for the added warmth of her
fur-lined leather jerkin, which she had donned only as an afterthought in her
haste to get to the stable. She reached up and pulled her woolen cap down over
her ears. Her short, silver-blond curls peered out from beneath the narrow
brim, softly framing her delicate features.

Gwendolyn's emerald green eyes darkened as she
reflected on the events of the past few months. Overtaken by her thoughts, she
unwittingly relaxed her firm grip on the reins. The dappled mare nickered
softly, tossing her head at this new freedom, and slowed her pace to a
meandering walk along the familiar path.

God's blood! Why
must everything change?
she
asked herself, a frown
creasing her forehead. As if in reply, a sudden gust of wind rustled through
the trees. Dry leaves, tugged from their branches, whirled silently to the
ground below. Gazing at the half-naked limbs that until a few weeks ago had
been green and full, Gwendolyn cursed herself for a fool.

If only Father
had not made that agreement with King Edgar,
she thought fiercely. As if it
had been yesterday, she recalled all too well the furtive conversation she had
overheard in the chapel between the family priest, Father Leofwine, and
Grimbald, her father's steward, late last spring. She had been sitting on a far
bench in the back of the small sanctuary, as was her wont when she wished to be
alone, when the two men entered from the side door. Apparently they had not
seen her, for they had not bothered to lower their voices. She listened,
unbelieving, to their words, scarcely able to breathe.

"Is it true, then, Grimbald, that a marriage is
being arranged?" Father Leofwine had asked, his wheezing cough echoing
about the empty chapel.

"Aye, Holy Father," Grimbald replied, nodding
his balding head, "but the news is yet a secret. Lady Anora has not been
told."

"Hardly a well-kept secret. The very walls have
ears," the stooped priest said wryly. "Well, then, why the secrecy?
Is it an ogre she will wed?"

Grimbald's eyes narrowed as he leaned closer to the
priest. "He is a Danish prince, Holy Father, and one of the most powerful
men in the Danelaw! King Edgar himself has proposed the match as a reward, one
could say, for the Dane's recent oath of allegiance to an English king."

Masking his initial surprise at the steward's outburst,
the old priest nodded his head solemnly. "So, our king is seeking an
alliance with the Danelaw," he murmured, rubbing his stubbled chin. "Perhaps
this marriage is part of a larger plan . . . aye, a great plan—one that might
end the bloodshed and hate between our two people, and further King Edgar's
quest for unity . . ." His voice trailed off, and Gwendolyn strained to
hear his next words. "And Earl Godric has agreed to this?"

"Aye, Your Holiness, but not without some
misgivings. You know as well as I that Anora is very dear to his heart. He is
not convinced that this is the best match for her." He paused, catching
his breath. "The king also asked about Lady Gwendolyn! But Earl Godric
insisted that as the elder of his twin daughters, Anora was the first to be
wed."

Shaking his head, Father Leofwine sighed heavily. "Pity
that the child must play a pawn in a king's game, even for so great a cause.
Perhaps she will go to him willingly." He was suddenly seized by another
fit of coughing. "Go now, Grim-bald. I am weary of this intrigue."

Gwendolyn watched furtively through lowered lashes as
the priest turned toward the gilded altar, abruptly dismissing the steward.
Then, wheeling around suddenly, he reached out his gnarled hand and caught
Grimbald's sleeve. "Wait! One more question before you go. What is the
name of this mighty prince of the Danelaw?"

Gwendolyn had not noticed that her hands had tightened
on the reins until the dappled mare snorted loudly at the rough treatment,
tossing her head in protest. Gwendolyn quickly loosened her fierce grip. "Forgive
me, Arrow," she soothed, stroking the rough gray hairs on the mare's neck.
Her voice was calm, belying the bitter turmoil that raged within her.

Passion by Marilyn Pappano
In Harm's Way by Lyn Stone
Naked Greed by Stuart Woods
Boy Midflight by Charlie David
Tales from the Captain’s Table by Keith R.A. DeCandido
Skeleton Key by Lenore Glen Offord
London Falling by T. A. Foster
Evenings at the Argentine Club by Julia Amante
Good for Now (Book One of The Now Series) by Ryan, Rebecca J.
Fear by Night by Patricia Wentworth