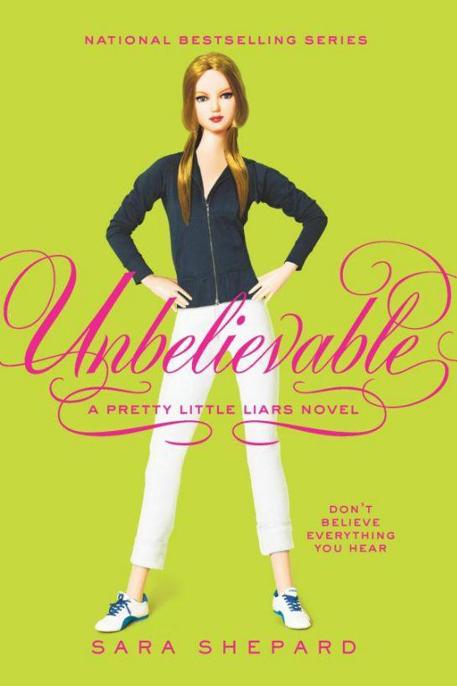 To Lanie, Les, Josh, and Sara

No one can wear a mask for very long.

How to Save a Life

Chapter 1:   The Zen is Mightier Than the Sword

Chapter 2:   Abracadabra, Now We Love Each Other Again

Chapter 8:   Doesn’t Everyone Talk About This Stuff in a Hospital Room?

Chapter 9:   It’s No Fun Being the Scapegoat

Chapter 10:   About as Far From Mindless as Aria Could Get

Chapter 13:   Only Losers Get Hit by Cars

Chapter 14:   Interrogation, With a Side of Spying

Chapter 18:   Now, Introducing, For the First Time Ever in Rosewood, Jessica Montgomery

Chapter 20:   No Secrets Between Friends

Chapter 21:   How Do You Solve a Problem Like Emily?

Chapter 24:   Spencer Gets the Guillotine

Chapter 29:   No One Can Hear You Scream

Chapter 31:   Some Secrets Go Even Deeper

Chapter 33:   The Moment of Clarity

Chapter 39:   The All-New Montgomerys, Disturbing as Ever

Chapter 40:   All That Glitters is Not a Golden Orchid

Chapter 41:   Presenting, in Her Return to Rosewood, Hanna Marin

Excerpt from The Lying Game

Back ad for The Lying Game

Back ad for Everything We Ever Wanted

HOW TO SAVE A LIFE

Ever wish you could go back in time and undo your mistakes? If only you hadn’t drawn that clown face on the Bratz doll your best friend got for her eighth birthday, she wouldn’t have dropped you for the new girl from Boston. And back in ninth grade, you would never have skipped soccer practice to hit the beach if you’d known Coach would bench you for the rest of the season. If only you hadn’t made those bad choices, maybe your ex-BFF would have given you that extra front-row ticket to Marc Jacobs’s fashion show. Or maybe you’d be playing goalie for the women’s national soccer team by now, with a Nike modeling contract and a beach house in Nice. You could be jet-setting around the Mediterranean instead of sitting in geography class, trying to find it on a map.

In Rosewood, fantasies about reversing fate are as common as girls receiving Tiffany heart pendants for their thirteenth birthdays. And four former best friends would do anything to travel back in time and make things right. But what if they really could go back? Would they be able to keep their fifth best friend alive…or is her tragedy part of their destiny?

Sometimes the past holds more questions than answers. And in Rosewood, nothing is
ever
what it seems.

“She’s going to be so psyched when I tell her,” Spencer Hastings said to her best friends Hanna Marin, Emily Fields, and Aria Montgomery. She straightened her sea-green eyelet T-shirt and pressed Alison DiLaurentis’s doorbell.

“Why do
you
get to tell her?” Hanna asked as she hopped from the porch step to the sidewalk and back again. Ever since Alison, their fifth best friend, had told Hanna that only fidgety girls stayed thin, Hanna had been making a lot of extra movements.

“Maybe we should all tell her at the same time,” Aria suggested, scratching the temporary dragonfly tattoo she’d pasted on her collarbone.

“That would be fun.” Emily pushed her blunt-cut, reddish-blond hair behind her ears. “We could do a choreographed dance and say, ‘Ta-da!’ at the end.”

“No way.” Spencer squared her shoulders. “It’s my barn—
I
get to tell her.” She rang the DiLaurentis’s doorbell again.

As they waited, the girls listened to the buzz of the landscapers pruning Spencer’s hedges next door and the
thwock-thwock
of the Fairfield twins playing tennis on their backyard court two houses down. The air smelled like lilacs, mown grass, and Neutrogena sunscreen. It was a typical idyllic Rosewood moment—everything about the town was pretty, and that included its sounds, smells,
and
inhabitants. The girls had lived in Rosewood nearly all their lives, and they felt lucky to be part of such a special place.

They loved Rosewood summers best of all. Tomorrow morning, after they completed their last seventh-grade final at Rosewood Day, the school they all attended, they would take part in the school’s annual graduation-pin ceremony. One by one Principal Appleton would call each student’s name, from kindergarten through eleventh grade, and each student would receive a twenty-four-karat gold pin—the girls’ was in the shape of a gardenia, the boys’ a horseshoe. After that, they would be released for ten glorious weeks of tanning, cookouts, boating trips, and shopping excursions to Philly and New York. They couldn’t
wait.

But the graduation ceremony wasn’t the true rite of passage for Ali, Aria, Spencer, Emily, and Hanna. Summer wouldn’t really start for them until tomorrow night, at their end-of-seventh-grade slumber party. And the girls had a surprise for Ali that was going to make this summer’s kickoff extra special.

“She’s upstairs, I think.” Mrs. DiLaurentis stepped out of the way. “Go on up.”

Spencer led the group through the hall, her white pleated field hockey skirt swinging, her dirty-blond braid bouncing against the middle of her back. The girls loved Ali’s house—it smelled like vanilla and fabric softener, just like Ali. Lush photographs of past DiLaurentis trips to Paris, Lisbon, and Lake Como lined the walls. There were plenty of photos of Ali and her brother, Jason, from grade school on. The girls especially loved Ali’s second-grade school picture. Ali’s vibrant pink cardigan made her whole face glow. Back then, Ali’s family had lived in Connecticut, and Ali’s old private school hadn’t required her to wear stuffy blue blazers for yearbook pictures like Rosewood Day did. Even as an eight-year-old, Ali was irresistibly cute—she had clear blue eyes, a heart-shaped face, adorable dimples, and a naughty-yet-charming expression, which made it impossible to stay mad at her.

Spencer touched the bottom-right corner of their favorite photo, the one of the five of them camping in the Poconos the previous July. They were all standing next to a giant canoe, drenched in murky lake water, grinning from ear to ear, as happy as five twelve-year-old best friends could be. Aria put her hand on top of Spencer’s, Emily put her hand on top of Aria’s, and Hanna piled her hand on last. They closed their eyes for a split second, hummed, and broke away. The girls had started the photo-touching habit when the picture first went up, a memento of their first summer of best-friendship. They couldn’t believe that Ali,
the
girl of Rosewood Day, had chosen the four of them as her inner circle. It was a little like being joined at the hip with an A-list celebrity.

But admitting that would be…well, lame. Especially now.

As they passed the living room, they noticed two graduation robes hanging on the knob of a French door. The white one was Ali’s, and the more official-looking navy one was Jason’s, who would be going on to Yale in the fall. The girls clasped their hands, excited to put on their own graduation gowns and berets, which Rosewood Day graduates had worn ever since the school had opened in 1897. Just then, they noticed a movement in the living room. Jason was sitting in the leather love seat, staring blankly at CNN.

“Heeyyy, Jason,” Spencer called, waving. “Are you
so
psyched for tomorrow?”

Jason glanced at them. He was the hot boy version of Ali, with buttery blond hair and stunning blue eyes. He smirked and went back to the TV without saying a word.

“Oh-kaay,” the girls all murmured in unison. Jason had his hilarious side—he was the one who had invented the “not it” game with his friends. The girls had borrowed and reinvented the game for their own uses, which mostly meant making fun of nerdier girls in their presence. But Jason definitely got into funks, too. Ali called them his Elliott Smith moods, after the morose singer-songwriter he liked. Only, Jason certainly didn’t have any reason to be upset now—by this time tomorrow, he’d be on a plane to Costa Rica to teach adventure kayaking all summer. Boo-hoo.

“Whatever.” Aria shrugged. The four girls turned and bounced up the stairs to Ali’s room. As they reached the landing, they noticed that Ali’s door was closed. Spencer frowned. Emily cocked her head. Inside the room, Ali let out a giggle.

Hanna gently pushed the door open. Ali had her back to them. Her hair was up in a high ponytail, and she’d tied her striped silk halter top in a perfect bow at her neck. She stared down at the open notebook in her lap, completely entranced.

Threat: Follow up to Stranded but not Alone (Dragoslava Connection) by Cora Blu
Visions of Gerard by Jack Kerouac
Hush by Micalea Smeltzer
Dead Ends by Erin Jade Lange
Naked Came The Phoenix by Marcia Talley
Crimson Death by Laurell K. Hamilton
My Fair Captain by J.L. Langley
Night Things: A Novel of Supernatural Terror by Talbot, Michael
Creepy and Maud by Dianne Touchell
South of Heaven by Jim Thompson