Read We Are All Strangers Online

We Are All Strangers 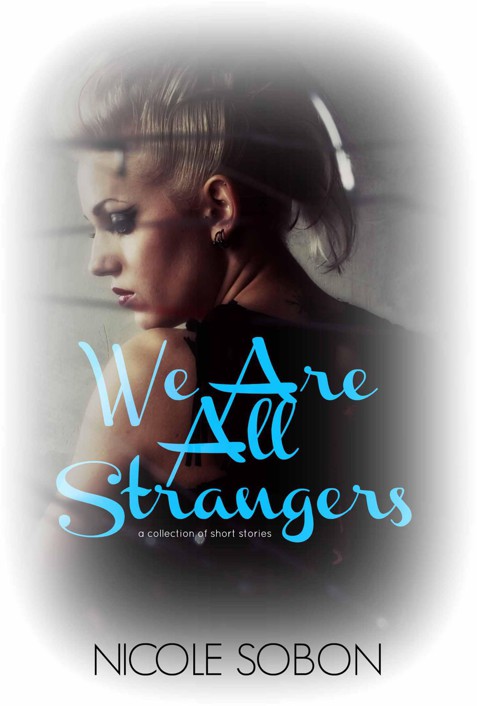 We Are All Strangers:

A Collection of Short Stories

We Are All Strangers: a Collection of Short Stories

This eBook is licensed for your personal enjoyment only. This eBook may not be re-sold or given away to other people. If you would like to share this book with another person, please purchase an additional copy for each reader. If you’re reading this book and did not purchase it, or it was not purchased for your use only, then please return to Amazon.com and purchase your own copy. Thank you for respecting the hard work of this author.

“R
elax, Twelve.”  I leaned back in the metal chair, allowing Jessica to hover over me. I could feel my hard-drive lock into place, connecting my Program to the scientist’s computer. “You should be used to this by now.” She yanked on the leather restraints, securing them firmly around my wrists.

I was used to this. Too used to this. But that didn’t make it okay; it didn’t change the fact that I suspected something was wrong.

“McVeigh just wants to make sure everything is okay.” Jessica smiled, but it didn’t reach her eyes. “I promise.”

I closed my eyes, unable to look at her any longer. I could sense that she knew today was different. Something happened during my evaluation. Something inside of me changed. Something that McVeigh didn’t approve of.

“No, Twelve. That isn’t it.” Jessica forced a smile. “We’re just concerned, that’s all. In order to move to Level Two, McVeigh needs to know that your Program won’t malfunction again.”

“Malfunction?” I scoffed. “He believes that my Program malfunctioned? Are your scientists that incapable of doing their jobs?”  I tried to hide my anger, but failed. This place, this hellhole, was built on lies. And I was one of them.

“Twelve, I’m going to need you to stop.” Her eyes darted towards the door; as though she were worried McVeigh would come strolling in at any moment. “I’m only trying to help you.”

“I’m going to leave now, okay?” She paused, waiting for a response that would never come. “Alright then, I’ll see you after your evaluation, Program Twelve. I promise.”

I listened as the door to the room slammed shut. The lights in the room slowly began to turn off, leaving only the glow of the monitors to illuminate the room. I listened to the humming of electricity as it traveled throughout my body. Each buzz sent me forward; a loud scream forced its way through my dry lips.

Something was awakening within me. Everything that I once was - it was slowly coming back to me. In bits and pieces, but it was coming back.

“Program,” a voice echoed throughout the room. “Your caretakers will be here to retrieve you shortly. Please remain seated until they arrive.”

The leather straps loosened on my wrists, falling off with a clank as the metal buckles slapped the steel armrests. I waited patiently for Jessica to stroll through the door. I could’ve easily walked out on my own; although I was sure I’d be met with McVeigh’s guards. And I wasn’t willing to risk that just yet. There was a reason that my Program had been altered, and I planned on staying around to find out why.

“Twelve?” The heavy metal door opened up, and I could barely make out Jessica peeking her head around the corner. “Are you ready to return to your Pod?”

“Program, your caretaker is speaking to you. Please answer accordingly,” a man’s voice sounded throughout the room.

She leaned in so that her right cheek was pressed against mine. “We both know what will happen if McVeigh finds out about this,” she reached for my hand. “I’m going to fix this, okay? I’m going to try and find a way to help you before he finds out. I just need you to try and remember what is expected of you until then. Can you do that, Twelve?”

“Because if he finds out that your Program has been altered, he will deactivate you.” Jessica backed away, and for a brief second, I could have sworn that I’d seen a tear escaping her eye. “And then what will have been the point, Twelve?”

The weight of my body, which was compiled of computer parts, almost caused me to crash into the ground as I tried to stand up. Jessica extended her hand out to me. “Please?” She pleaded. “I’m only here to help you.”

I allowed her to take a hold of my hand as she led me out of the room. The hallway was bright and quiet now that most of my fellow Programs had entered standby mode. “Where are we going?” I asked, careful to mind my tone.

“To the Pod room,” she replied matter-of-factly. “Don’t worry, Twelve. Everything is going to be just fine.”

I could only hope. “Thank you.”

I could feel the eyes of the other White Coats locked on me. A walking freak show. A disgrace to mankind. A person trapped inside of a machine. I could understand their disgust because, like them, I hated what I’d become.

I wanted to unleash my inner rage, to fight back against what they’d done to me. But I needed to remind myself that fighting back wasn’t going to help me escape.

We continued down the hallway until we stopped in front of the Pod room. Jessica pressed the small, red button on the wall. “Program identification,” a computerized voice asked over the outside speaker.

“Twelve,” Jessica answered. She loosened her grasp on my wrist as the large, glass panel slid open, giving us permission to enter. “Come now, Twelve.”

A small, white scanner sat just inside of the doorway. Jessica scanned her security badge and then waited for me to follow behind her. I held out my right wrist so that the scanner could read my bar code.

“Proceed,” a voice crackled over the intercom.

“Come on.” Jessica grabbed a hold of my wrist and escorted me further inside of the room.

“No.” I whispered, making sure that only Jessica could hear me.

Jessica smiled hesitantly. “What do you mean, Program?”

Just as I was about to attempt an escape, the door to the Pod room opened; in walked Charles McVeigh, flanked by Douglas Todd, his ever loyal assistant. “Program,” he nodded. “Jessica, why don’t you prep her for standby mode? Then, once you’re finished, we can chat for a bit.”

I watched as Jessica’s eyes grew wide with what seemed to be fear. “Of course,” she forced a smile. “I’ll get right on that, sir. Program, if you’ll just follow me this way.” She gripped my wrist forcefully, indicating that now was not the time to fight.

Not now. But soon.

We walked past the Security Tube on the way to my Pod. I caught a glimpse of the boy behind the glass. His bright blue eyes were focused on me. I’d seen him before. A few times, actually. But never like this. I’d walked past his tube many times, but not once did I see who he was. He wasn’t like them. There was still a shimmer of life inside of his eyes. A small, but present sign of hope.

I glanced back at the tube before turning my head to see McVeigh staring at me questioningly. I pressed my hands against the sides of the Pod, waiting for the system to identify my Program. The glass doors parted upon confirming who – or what – I was. I eased myself inside of the Pod, careful to keep my hands at my sides as I did so.

I turned around so that I was facing Jessica as I laid back. My hard-drive clicked into place as the doors sealed shut.

I was used to this. I’d done it so many times before. It should have been second nature to me. But it wasn’t. I could feel it now. I could feel the pain of the electricity rushing through my body.  And it hurt.

But the scream was already erupting from my lips.

Jessica closed her eyes, and for a second, I could have sworn I saw her begin to shake. She was beginning to break. Because she knew what was coming. “No,” she whispered. “This can’t be happening right now.”

I was supposed to remain still. During standby mode, my Program was to enter sleep mode. I shouldn’t have been able to scream – my body should have been asleep. But I did scream. And Charles McVeigh had heard me. There was no hiding the truth anymore: my Program, his precious Twelve, had been altered without his approval.

“When did this happen?” McVeigh stormed over to where Jessica was and shoved her against the Security Tube. “Who did this?” he demanded.

“Don’t you dare lie to me, miss.” He turned his head to glance over at me. I could see the hatred in his eyes. The fear of knowing I could very well destroy everything he had built. He gripped Jessica’s coat tightly and slammed her head against the tube. “I’ll ask you again, when did this happen?”

Jessica shook her head. “Does it really matter?” She asked. “We both know what you’re going to do. Why don’t you just get it over with already?”

He laughed and loosened his grip on her coat. “It was you, wasn’t it?”

“Todd, come and help me over here, will you?” McVeigh moved his hand around Jessica’s throat. A menacing smile formed upon his lips.

“How may I be of assistance, sir?” Douglas Todd folded his arms behind his back.

“She’d make a fine Program, don’t you think?” he smirked.

“A fine Program indeed.” Todd moved in closer and grabbed a hold of her left wrist.

McVeigh released her to Todd, who tied her wrists with wire, and moved over to my Pod.

“Should I wait, sir?” Todd asked, eyeing me.

“No, no, you go on. I’ll take care of this problem on my own.” The way he stressed "problem", as if I were some sort of disgrace to the world, was a clear indication of what was in store.

He’d killed me once already.

What did it matter if he did it again?

“It’s a shame really.” He moved to the side of the Pod and yanked out the power cord. “You really could have been something special.”

He gripped me by my throat, pulling me closer to him. I wanted to scream in agony as he yanked my hard-drive out of the slot in my Pod. But I didn’t. I couldn’t dare show him that I was weak. “You were everything I hoped for when I took over this business. You,” he shoved his free hand into my chest. “You were perfect. Do you understand that?”

“Yes,” I said. “I was perfect. But then you killed me. Do you remember that?”

McVeigh removed his hand from my throat and walked over to the Security Tube. “Hayden?” he tapped on the glass. “Could you come here for a second?”

The boy looked nervous. “Y-y-yes, sir. I’ll be right there.”

He exited the tube and stood beside McVeigh, who was leaning against the tube, hands folded at his waist. “You’re new here, correct?”

The Sea Glass Sisters by Lisa Wingate
Monster by Aileen Wuornos
The Stranger by Albert Camus
Granite Grit (Fighting's in the Blood #1) by Lee Cooper
Dear Crossing by Doering, Marjorie
Lucky Break #6 by Cindy Jefferies
The Burnt Orange Sunrise by David Handler
The Complete Adventures of Feluda: Volume I by Satyajit Ray
The Jackal of Nar by John Marco
His Good Opinion: A Mr. Darcy Novel by Nancy Kelley