Read When the Legends Die Online

When the Legends Die 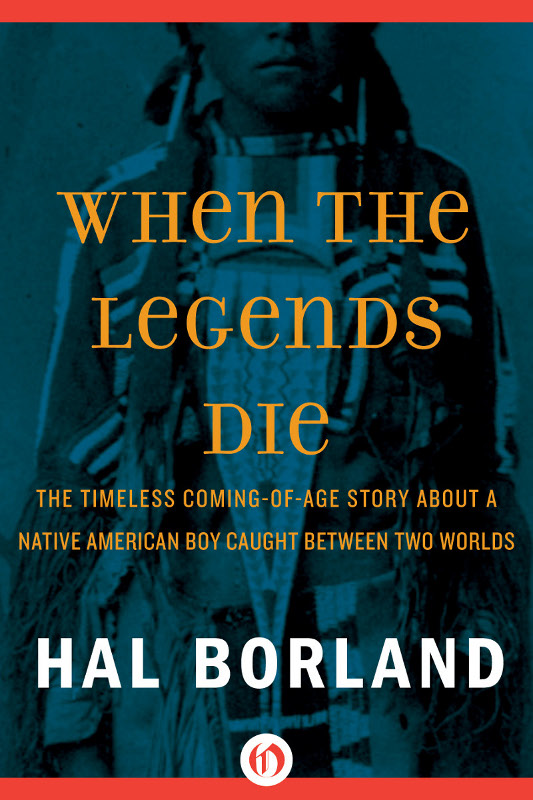 When the Legends Die
by Hal Borland

Who has gathered piñon nuts

and heard the old songs

When the legends die,

When the dreams end,

there is no more greatness.

H
E CAME HOME IN
midafternoon, hurrying through the alley. She was sitting on the back step of the unpainted two-room house, peeling willow twigs with her teeth and watching the boy chase butterflies among the tall horseweeds. She looked up and saw her man come in from the alley, through the horseweeds toward her. His face was bloody, his shirt torn and bloody down the front. She clapped a hand to her mouth to stifle the cry of hurt and surprise, and he stepped past her, into the house. She followed him and he gestured her to silence and whispered, in the Ute tongue, “They will come after me. Bring water to wash. Get the other shirt.”

She went outside, filled the tin wash basin from the water pail on the bench beside the door, and brought it to him. She got the other shirt while he washed his face. There was a cut over his left eye and a darkening bruise beside his mouth. He washed his face, then his hands, and gave her the pan of red-stained water. She took it outside and poured it on the ground among the weeds, where it sank into the dry soil and left only a dark, wet spot. When she went inside again he had taken off the torn shirt and wrapped it into a tight bundle with the bloody places hidden. He pulled the clean shirt over his head, tucked the tails inside his brown corduroys and said, still in the Ute tongue, “I shall go to the stream with black-stem ferns on Horse Mountain. Come to me there.” He went into the other room and came back with the rifle. He tucked the bundled shirt under his arm and went to the door, looked, waited, then touched her face with his free hand and went outside. He hurried through the weeds and down the alley to the place where the scrub oak brush grew close by. He went into the brush, toward the river. The magpies screamed for a moment, then were silent. He was gone.

She wiped the water from the table where he had spilled it, searched the floor for spots of blood, and wiped the tin basin with the rag. She went outside and put the basin beside the water pail and looked at the place where she had emptied the basin after he washed. The wet spot on the ground was almost gone. She came back and sat on the step again.

The boy, who was five years old and only an inch or so taller than the horseweeds, came and stood at her knee, asking questions with his eyes. She smiled at him. “Nothing happened,” she told him. “Nobody came. Nothing happened. Remember, if they ask.” He nodded. She handed him a willow twig. He peeled the bark with his teeth, as she had done, chewed the bark for a moment, tasting the green bitterness, and spat it out. “Go catch a grasshopper,” she said, and he went back among the weeds.

She waited half an hour. Then they came, up the street and around the house. They came and stood in front of her, the tall man who always came when there was trouble, the short, fat one from the sawmill, and Blue Elk, with his squeaky shoes, his black coat and derby hat, his wool-bound braids, his air of importance. She looked up at them, each in turn, and she clapped her hand to her mouth and began to wail. “You bring trouble!” she cried. Then, to Blue Elk, in the Ute tongue, “My man is hurt?”

The tall man, the sheriff, watched her and said to Blue Elk, “See what she knows.”

Blue Elk rubbed his hands together. They were the soft hands of a man who has not worked in a long time. He said, “Bessie! Stop the wailing. The wailing is for another woman. Let her make the mourning.”

“You know he is not hurt. Where have you hidden him?” They both spoke Ute.

“He is not here. Why do you come here for him?”

“If you know this, then find him.” She gestured toward the house.

“She says he is not here. She says we should look.”

The sheriff and the sawmill man went inside. She sat waiting. She asked Blue Elk, “Why do you want my man? What happened?”

“That one.” Scorn was in her eyes.

“I know. Frank was a thief, a no-good. But George killed him. Where did George go?”

The sheriff and the sawmill man came back. “No sign of him. What does she say now?”

The sheriff and the sawmill man talked in low tones. Blue Elk turned to her again. “Where is the boy?”

She glanced about the weed patch before her eyes met Blue Elk’s. She waved her hand vaguely. “Boys play, go where they will.”

“They will watch you,” Blue Elk said, still in the tongue.

Blue Elk said to her, “You heard. For the cost of two horses I could settle this.”

“I have not the cost of two horses.”

She shook her head. “I have not the cost of one goat.”

“She says he did not come here. She says she has not seen him.”

The sheriff grunted. “They just kill each other over a lunch pail. Some day one of them is going to kill you, Blue Elk.”

“I am an old man who has done much for my people.”

“He’s probably hiding in the brush down along the river,” the sheriff said. He turned to the sawmill man. “We’d better go find Frank’s woman. She’s probably heard by now, but you better tell her you’ll pay for the funeral.”

“For a coffin,” the sawmill man said. “Fifty dollars for a coffin. That’s all.”

Blue Elk’s eyes had darted to him when the money was mentioned. The woman on the steps saw, and she said to him in Ute, “The cost of two ponies?” There was scorn in her voice.

“She says she is glad it was not her man who was killed.”

“You know where to find Frank’s squaw?”

Blue Elk nodded, and they left.

She sat on the steps another ten minutes. Then she said, “Come now,” and there was a movement among the horseweeds near the alley. The boy stood up and came to her and they went indoors. She praised him. She walked about the house, choosing certain things, not taking them from their places, but choosing them. The extra box of ammunition for the rifle. The package of fishhooks and spool of line. Two butcher knives. Spare moccasins for herself and the boy. The boy’s blue coat. Two brown blankets.

She sent the boy for kindling, started a fire in the iron stove and put the piece of meat to boil. She neatened up the house, to leave it clean … and to occupy the time. It was a company house. The man at the pay desk took money from her man’s pay every week to pay for rent of the house and for buying the furniture, the old iron bed, the dresser with the broken leg, the four chairs, the table, the stove. For two years he had taken money to pay for these things and he said there was still more to pay. By now, she told herself, they had paid for the two blankets, and that was all she was taking, the blankets. The butcher knives were hers, from before they came here. She had made the moccasins, and the coat. She was no thief.

Her choosing done, the house neat, she went outside and sat on the step again. The boy sat with her, in no mood for play. When the meat was cooked, they would eat. When it was dark, they would pack the things and go. Two years ago Blue Elk had brought them here, from Horse Mountain. Now, in a way, Blue Elk was sending them back to Horse Mountain.

She thought of the summer two years ago.

I
T WAS HOT, THAT
summer of 1910. They lived near Arboles on the Southern Ute reservation in southwestern Colorado, and her man had a cornfield. The drought came and the corn burned up. In July her man said one evening, “We are going fishing.”

The next morning they went, in six wagons. They went up the Piedra to the reservation line and camped. The men caught fish and they ate their fill, and it was like the old days when they were children and all summer they ate fish and picked berries and there were no cornfields to worry about. In the evening the men wrestled and ran races and the children threw stones at the magpies and the women sat and talked. It was a happy time.

The next day someone said they should go in to Piedra Town and buy candy for the children. Charley Huckleberry said it was all right to go. So they broke camp and went in to town and bought candy for the children and the women went to the store and fingered skirt cloth and admired it, but they had no money for skirt cloth. They had spent all the money they had. Then someone said, “Let us go on up the river and camp and catch fish.” Charley Huckleberry said he guessed that would be all right, too.

They went on up the river and camped, and there were plenty of fish. Serviceberries were ripe. The men caught fish and the women and children picked berries, as in the old days, and they set up racks and smoked the fish they didn’t eat.

They stayed there a week. Then they went up the river another day and found a place where there were more berries, more fish. And the men killed two fat deer that had come down to the river to drink. The venison tasted good after so much fish, and the women told the men to go up on Horse Mountain and get more deer and they would dry it, the old way, for winter. There were many deer on Horse Mountain and they made much meat. Nobody remembered how long they were there because it didn’t matter. When they had made meat for the winter, they said, and had smoked fish and dried berries for the winter, they would go back to the reservation.

Then Blue Elk came and found them there, and Blue Elk said they were in bad trouble. He said the police would come after them because they had come to Horse Mountain without a permit.

They all gathered around Blue Elk to hear this news. Charley Huckleberry said there wouldn’t be any trouble because he was in charge and he was a member of the council. But Blue Elk said the council had sent him to find them.

“The council sent you?” Charley asked, and everybody knew that Charley Huckleberry was worried.

“They said when I found you,” Blue Elk said, “I should tell you this. That there is trouble.”

Then Charley asked, “Who paid you to come? Somebody always pays you to come to tell of trouble. The council didn’t pay you. Who did?”

Cross My Heart by Abigail Strom
Dark Magic by Swain, James
Blame It on the Bikini by Natalie Anderson
Silver and Salt by Rob Thurman
Wild Wood by Posie Graeme-Evans
Project Love (Cascade Brides Series) by Blythe, Bonnie
Out of Breath by Donovan, Rebecca
Heart of Stars by Kate Forsyth
A Necessary Deception by Georgie Lee
The Open House by Michael Innes