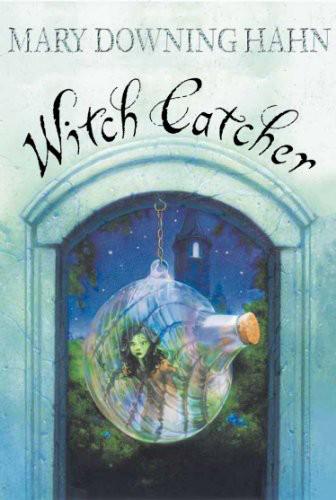 The text was set in 12-point Ellington Light.

For my neighbors,
Kathleen and Sarah,
who love to read

"
T
HERE IT IS,
J
EN
.
" Dad slowed the van and pointed at a big stone house high on a hill above the road. "Mostyn Castle. Our new home, thanks to Great-Uncle Thaddeus, bless his strange old soul."

I leaned out the window and stared up, up, up, stretching my neck to see above the treetops. Months ago, when Dad told me about the house, I'd accused him of exaggerating, but for once he'd told the truth. It really
was
built like a castle, turrets and all. Crowning the hilltop, dark and mysterious, the house was a place where anything could happen—anything except the ordinary.

"It's a big change from what you're used to." Dad said quietly. "Nobody next door. Nobody across the street. No friends nearby. Just you and me rattling around in dozens of big. dark rooms."

"I love it." I leaned back in my seat and grinned. A castle—I was going to live in a castle, a childhood wish come true.

"If you're not happy here," he went on, "we'll sell it and move back home to Maryland."

I turned and watched cloud shadows pattern the castle's stone walls. "I'll be happy," I promised him. "And so will Tink."

At the sound of his name, my cat meowed impatiently from his cage in the back seat. I reached around and touched his pink nose with the tip of my finger. "We're almost there," I told him.

"Tink will be ecstatic," Dad said. "Can you imagine how many mice he'll catch?"

Without thinking, I asked, "What about my mother? Would she have liked living here?"

"Yes, I think so." Dad gripped the steering wheel a little too tightly. "Elaine loved castles and fairy tales, magic...." His voice drifted off and he gazed at the castle, seeing it with my mother's eyes, I thought. Seeing it for her.

"I just wondered—" I broke off with an embarrassed shrug, sorry I'd spoiled the mood of the day.

Dad eased the van into gear. "We'd better get going," he said. "We have a lot to do." Soon a wall of trees blocked our view of the house.

"Tell me about Uncle Thaddeus," I said. "Did you ever meet him?"

"Once," he said. "I must have been five or six. We happened to be passing through this part of West Virginia on our way home from a vacation, and my father suggested paying Uncle Thaddeus a visit. He thought the old man would enjoy meeting me."

Dad shook his head in remembrance. "Great-Uncle Thaddeus was the scariest person I'd ever seen. Tall and gaunt, long white beard, old-fashioned black suit. He didn't smile or say one word to me the whole time we were there, but he watched every move I made. The place was full of antiques—valuable stuff, according to my mother. Vases, statues, bric-a-brac. He must have been worried I'd break something. I was convinced he hated me."

I looked at Dad, puzzled. "But he left his house to you. He must have liked you."

"Uncle Thaddeus died without a will, Jen. Apparently, I'm his only living relative, so the court awarded his estate to me. Who knows what the old man wanted to happen to his property?"

Dad turned right into a curving driveway lined with tall, drooping trees whose branches scraped the roof of our van. I caught sight of squirrels dashing this way and that, alarmed by the engine's noise. Birds flew out of the trees, fluttering about in confusion. I thought I glimpsed a deer streaking away through the underbrush.

The driveway ended in a weedy circle in front of the house. Steep steps rose to a porch, and beyond them were two massive wooden doors, their panels carved with twining vines and leaves. Crouching stone lions flanked the steps, their snarling faces furrowed from years of rain and snow. Trailing long strands of ivy, a pair of tall stone urns stood on either side of the door.

In spite of the summer sun, I shivered. Up close, the house was not as inviting as it had appeared from a distance.

Dad shoved a huge key into the lock and, with some effort, opened the doors. Lugging Tink's cage, I followed him into a dark hallway that smelled of dusty air and cold stone. In the kitchen, I put Tink's cage on the floor. He cowered inside, meowing pitifully.

"I'll set you free when we get settled," I told him. "If I open the door now, you might run outside and get lost."

Tink made himself as small as possible in the very back of his cage and continued to meow in a plaintive, kittenish way. He was a big yellow tabby but very timid. The original scaredy-cat.

"Don't worry," I told him. "We're not at the vet's office. Nobody's going to take your temperature or give you a shot. This is our new home."

"I'm beginning to think you don't like it here," I said softly.

"Jen," Dad called from the hall. "I could use some help."

I reached into the cage, gave Tink a pat on his nose, and left him to fuss in private.

Dad and I made trip after trip to the van and back, carrying in our luggage, a few days' supply of groceries, our books, clothes, and other personal stuff. We didn't need anything else. The house was crammed with Uncle Thaddeus's belongings—tables and chairs, beds and bureaus, sideboards and sofas, armchairs and clocks, books and bookcases; enough furniture to fill all the houses in a city block.

Before I unpacked, I carried Tink to the room I'd chosen for myself, just down the hall from Dad's. I closed the door and let him out of his cage. He immediately ran under the bed and refused to budge.

I got down on the floor and tried to lure him out, but he'd pushed himself against the far wall. He crouched there and stared at me, as if to ask why I'd brought him here.

I got to my feet and went to the window to see what I could see from my room. I drew in a deep breath, amazed at the sight of a tall stone tower behind the house. Weeds and brambles had grown up around its base, and its walls were almost hidden by ivy The afternoon sun glinted on tiny windows under the eaves of the roof. Rapunzel, Sleeping Beauty, Bluebeard's wife—any of them could be imprisoned there.

Leaving Tink huddled under the bed, I ran downstairs to find Dad. "There's a tower in the backyard," I cried. "Have you seen it?"

He looked up from a box of groceries. "I've been to the house four or five times already. How could I have missed something as big as that tower?"

"Why didn't you tell me about it?" Without giving him a chance to answer, I shot out the door and ran down the hill toward the tower.

Behind me Dad called, "Jen, wait!"

But I was too excited to stop. I plunged through the weeds and bushes and stopped in front of a huge oak door carved with strange marks—not exactly words, not exactly pictures, but symbols of some sort. Despite the rusty padlock, I tugged at the door, but I couldn't budge it.

Dad crashed through the bushes behind me.

I stared at him in surprise. "Why?"

"I explored the place on my first visit. The stairs are rotting, and the floors are unsound. I didn't dare go to the top. All that's holding those stone walls together is ivy. One good wind could topple the whole thing like a pile of blocks."

"But, Dad, don't you want to know what's up there?" I gazed at the tiny windows catching the late-afternoon sun and imagined treasure hidden under the floorboards.

Shading his eyes. Dad squinted at the tower. "Anything Uncle Thaddeus left behind would be ruined by now. Most of the windows are broken. The roof leaks. I'm sure bats, pigeons, and mice have done their share of damage, as well as years of rain and snow."

"Couldn't we at least go see?" Although I wasn't fond of bats, pigeons, or mice, I wanted to climb the rotting stairs to the very top. I wanted to look out those little windows and see the woods and the house and the gardens from way up high. But most of all I wanted to find something wonderful tucked out of sight in an old chest. A treasure, maybe—gold coins, jewels, silver ... things worthy of being locked away in an old tower.

Dad tugged on the padlock to make sure it was locked. "The tower's not safe," he repeated. "It's strictly off-limits to you."

I bit my lip to keep from begging. Dad didn't like me to argue with him. If I backed off now, he might change his mind later.

When he started to turn away, I grabbed his arm. "Did you notice these?" I pointed at the odd marks on the door.

Dad studied the carvings. "They look like runes. Ancient writing, supposedly the language of magic and spells."

"Why would your uncle carve them on the door? They're spooky."

Dad shrugged. "Apparently, Great-Uncle Thaddeus was a strange man, Jen. He lived here like a hermit. Never went anywhere, never entertained. A recluse, but harmless-more eccentric than anything else."

Dad looked at the runes again. "According to the lawyer who settled the estate, my uncle had quite a reputation in town. People mistrusted him. They spoke of seeing lights in the tower windows every night till dawn. It was rumored that he never slept, never ate, never spoke. A few even suspected he practiced witchcraft."

Despite the warm June day, goose bumps pimpled my skin. "Do you think it's true, Dad?"

"Of course not." Dad glanced up at the house. The sun was behind it now, darkening the stonework. "Great-Uncle Thaddeus was a brilliant man, a scholar, an artist, a gardener, a philosopher. He didn't fit in with the locals, so they made up ridiculous stories about him." He frowned. "It's the fate of extraordinary people to be misunderstood by ordinary people."

I'd heard Dad state this opinion many times before. He was an artist himself, forced to teach high school art classes for a living. Most of the time he made a joke out of it—the poor starving artist breaking up fights in the school parking lot. But on bad days he complained he was unappreciated, misunderstood, undervalued. Mom had been good at getting him to laugh at himself, Dad always said. Too bad I didn't have her talent.

While Dad nattered away about small towns and small minds, I reached out and touched one of the runes on the door. For a moment, I felt an odd tingling, almost like a tiny shock. Startled, I jerked my hand back.

I glanced at Dad to see if he'd noticed, but he was already walking up the hill toward the house. I followed him slowly, glancing back now and then at the tower. The ivy on its walls rustled in the breeze, rising and falling as if the tower were alive and breathing. High up, the tiny windows sparkled in the sunlight.

With or without Dad's permission, I planned to explore the tower the first chance I got.

I
CAUGHT UP WITH
Dad in the kitchen, where he stood staring helplessly at the pots and pans he'd been attempting to organize before I interrupted him.