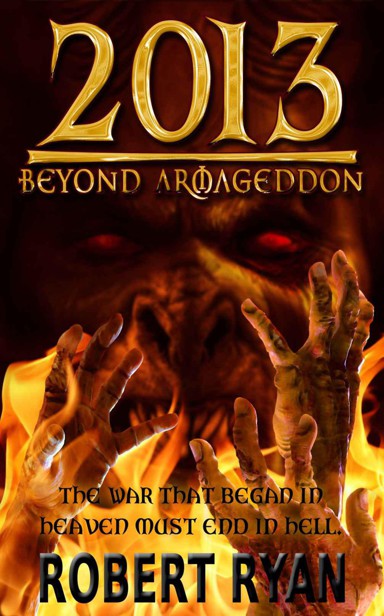 This book is dedicated to Shirley

neither the day nor the hour

wherein the Son of man cometh.

And when I looked, behold,

A hand was sent unto me;

and, lo, a roll of a book was therein;

And he spread it before me;

and it was written within and without:

and there was written therein

The sharp knock at the door startled the priest. It sounded more than urgent.

Who could be calling at this ungodly hour? Hostilities were escalating daily between the Arabs and Jews. Ancient foes stalked the streets, looking for someone to kill. Even a priest in his rectory after midnight could get caught in the crossfire of their hatred.

Father Boyle smiled at his paranoid Catholic guilt. He’d been thinking sinful thoughts of pride and betrayal, so naturally a deadly penance had come knocking at his door.

He put down the magnifying glass he’d been using to study an ancient fragment of text, wiped his bleary eyes, and went to answer the door. The familiar weatherbeaten face at the peephole, tanned almost black from a lifetime in the desert, made him click on the foyer light and open the door. He waved his visitor in and spoke to him in Arabic.

“Tarik. What are you doing here so late?”

“I got lost. I can never find this place.”

It always amused the priest that the Bedouin could find his way around the uncharted Judaean Wilderness, but got lost coming here. The Old City section of Jerusalem could be a confusing labyrinth, but Tarik had been here before. “Just turn off Via Dolorosa when you see that marker for the 5th Station of the Cross.”

“Hard to see when it’s darker than Jahannam.”

Gehenna, Father Boyle thought, automatically translating the Arabic word for Hell into its Hebrew equivalent. Something else was troubling the Bedouin. Tarik held something cradled against his chest. The priest couldn’t see what it was, but he could guess.

Since July, the Bedouin had been making incredible scroll discoveries and selling them wherever they could. The Vatican got word that they were missing out on possible Biblical texts, so they’d quickly dispatched himself and Monsignor Donatelli, their two top paleographers, to Jerusalem with the full resources of the Holy See behind them. Two adjacent failed shops in the Old City had been hastily converted into a scrollery and residence. Tucked away on a side street in the Christian Quarter, no sign announced its existence. The two priests had discreetly gotten word to the Bedouin that this was a good place to bring anything old with writing on it.

The priest explained. “Once I’m in for the evening, I change into something more comfortable.” Tarik still looked skeptical, so he added, “It’s allowed.”

“Where is the old man?” The door was still open and the Bedouin looked around nervously at every rustle of the wind.

“He is at the Vatican on business.”

It was a lie. Monsignor Donatelli was asleep in the back room, dead to the world. Father Boyle needed to keep him out of this. Two months ago a Bedouin had tried to sell a complete scroll to the “Official Vatican Paleographer for Jerusalem,” but the senile old fool had turned him away. Said it couldn’t be genuine. Father Boyle had assured him it was, but he wouldn’t listen to a twenty-four-year old assistant fresh from the seminary. Never mind that he’d been rated as a genius in languages from the time he was eight.

“I will come back,” Tarik said, turning to go.

The priest smelled his chance. If Tarik had something good, and he could procure it instead of Donatelli, it could be a shortcut to the title he coveted: Official Paleographer for the Vatican. Even then it might still take years. Donatelli had been working toward the position his whole life. Too bad. His time had passed. It was every man for himself and the devil take the hindmost.

Father Boyle waved the Bedouin in and closed the door.

Tarik held out a terra cotta jar, about eighteen inches high. “Two complete scrolls. Perfect condition. And the jar. It has writing also. Tell the old man it will cost him a hundred thousand American dollars.”

Father Boyle stifled a roar. He sensed a bluff. Something about the scrolls was making the Bedouin nervous. He wanted—needed—to get rid of them quickly. “Tarik.” He made a humble face. “I must see them first. Then we can decide what they are worth.”

“I tell you one hundred thousand. One of these already slipped through your fingers.”

Not mine. His. “My friend, be reasonable. Where would a lowly young priest like me get that kind of money?”

“Tell your Pope to sell one of his costumes.”

His attempt at humor was masking something else. Father Boyle knew he couldn’t come close to this man’s ridiculous asking price, yet he must see these scrolls. He couldn’t make the same mistake Donatelli had made.

“Let’s do this,” he said. “Come into my office, so I can see what you have. Then we can discuss terms. If we cannot agree, then there is no harm and I will wish you well. What do you say?”

Father Boyle smiled and beckoned for Tarik to follow him. He glanced at Donatelli’s large, well-appointed office and felt the usual twinge of resentment when he entered his small hole on the other side of the hall. The light from his pole lamp near the desk barely reached the edges of the room. A picture of the Pope hung crookedly on one wall. He was smiling beatifically and waving a hand in benediction: God Bless This Mess.

The other walls were filled with shelves crammed with books. Stacks of research materials covered the floor. In the middle was his small rolltop desk and a battered wooden chair, looking like an island surrounded by the flotsam and jetsam of a shipwreck.

Tarik followed along a narrow makeshift aisle in the stacks on the floor. He carefully placed the jar on the desk and remained standing.

The priest sat. Two full scrolls. Not maddening little pieces. Heart pounding, he took a breath and reached for the jar.

“Be very careful.” The Bedouin stood at the priest’s right elbow, scrutinizing his every move. His hand brushed open his
jalabiyya
and came to rest on the knife at his waist.

“Maybe you’d better open it then, to be on the safe side.”

“A good idea.” Tarik secured the jar in one arm and gently twisted.

The stopper was black and wrinkled. Bits of it flaked off. An animal skin, perhaps, wadded up for the purpose. The jars of the Qumran scrolls reportedly had lids, not stoppers, and were considerably larger. Father Boyle pushed the thought aside. He could figure all that out later. First he needed to close the deal—if what he saw was any good.

After much careful twisting the stopper came out. A sound, like a mournful sigh, escaped.

Startled, Father Boyle said, “What was that? A jinni?” He used the Arabic word rather than the American genie.

“You believe the Arab superstition?”

Tarik tried to smile but his eyes betrayed him. The priest wanted to believe the sound was thousands of years of pent-up air being released—except that Tarik must have already opened the jar to know what was inside.

Father Boyle barely believed in God, so he wasn’t about to believe in genies, but maybe that explained the Bedouin’s haunted look. If he was worried about a curse, he’d be eager to part with the scrolls at any price. The priest fostered the idea.

“Do you think the jinni serves Allah—or the outcast Iblis, leader of the fallen ones?”

“I do not joke about such things. Neither should you.”

They stared at each other for several seconds before Tarik proceeded. Like a man handling nitroglycerine, he slowly removed the smaller of the two scrolls, then eased it onto blotter atop the desk. Father Boyle swung his hinged desk lamp over and shone the bright circle of light on the roll of parchment.

Since Donatelli’s colossal blunder, all they’d gotten were tiny fragments that had been driving them mad. Now they had a second chance at not one, but two complete scrolls. Perhaps their last chance.

The priest tried to control his accelerated breathing while he assessed the situation. Any ancient scroll should be humidified before opening to avoid damaging it, but there was no time. The old man’s bladder was like clockwork. He’d be getting up to go to the bathroom any minute now.

Father Boyle grabbed a small spray bottle of water and lightly spritzed the scroll. That would have to do. “If it starts to crumble I’ll stop immediately.”

Tarik gave a curt nod and set the jar on the desk.

The priest pulled two bars of solid glass and a ruler from a cubbyhole in his desk and placed them within easy reach. The glass bars were about eighteen inches long and an inch thick, rounded except for one flat side, to which a strip of felt had been glued. Father Boyle’s invention, he called them his “papyrusweights.”

With hands as steady as a surgeon’s, the priest unrolled a few inches until the first words became visible. With quick deft movements, he used one glass bar to keep the unrolled scroll from springing closed and the other to secure the leading edge. The exposed portion now lay flat on the desk. He measured the width of the scroll at ten inches. He could only guess at its length when fully unrolled. Probably a foot or so. His eyes rapidly scanned the text.

The state of preservation was astonishing. The ink had hardly faded at all. For several minutes he stared at the writing. It was perfect Hebrew, written with an untrained hand. “Where did you find this?”

Ein Bokek was very far south of Qumran. Still on the western shore of the Dead Sea, but near the edge of the southern basin. Which meant this scroll—if it was genuine—could not have come from the same community.

He couldn’t make sense of it. The hand was crude, non-scribal, and yet there was a fluency to the language. Slowly, as though a blurred photograph were coming into focus, he began to decipher the opening lines. Donatelli would have needed weeks. He jotted his translation onto his notepad, then stared in disbelief at what he had written.