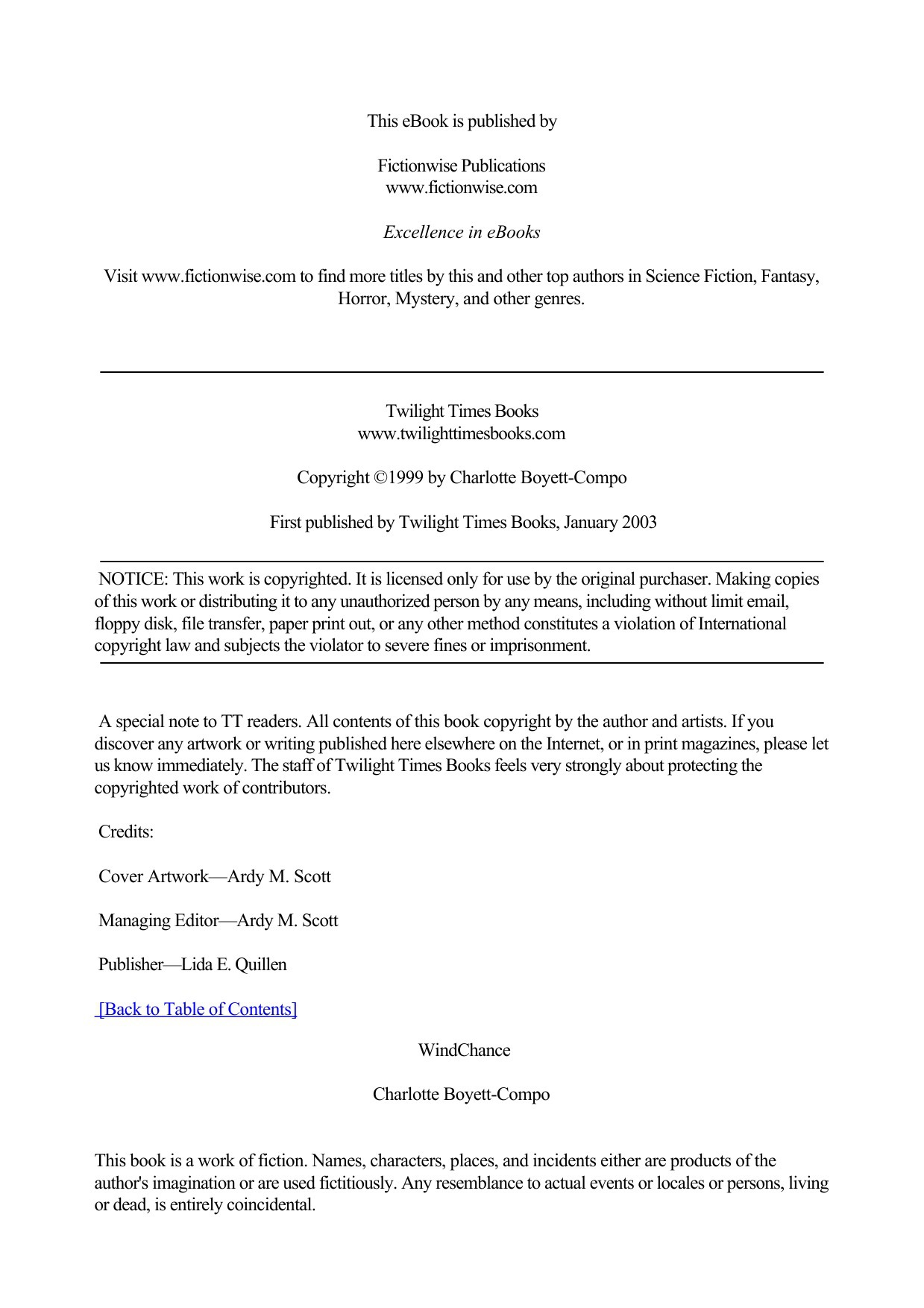 This eBook is published by

Visit www.fictionwise.com to find more titles by this and other top authors in Science Fiction, Fantasy,

Horror, Mystery, and other genres.

NOTICE: This work is copyrighted. It is licensed only for use by the original purchaser. Making copies

of this work or distributing it to any unauthorized person by any means, including without limit email,

floppy disk, file transfer, paper print out, or any other method constitutes a violation of International

copyright law and subjects the violator to severe fines or imprisonment.

A special note to TT readers. All contents of this book copyright by the author and artists. If you

discover any artwork or writing published here elsewhere on the Internet, or in print magazines, please let

us know immediately. The staff of Twilight Times Books feels very strongly about protecting the

This book is a work of fiction. Names, characters, places, and incidents either are products of the

author's imagination or are used fictitiously. Any resemblance to actual events or locales or persons, living

or dead, is entirely coincidental.

PART ONE
Chapter One

“Where away?” The Captain raised his spyglass and swept the rolling vista before him.

“To the starboard, Cap'n. Thirty yards off the bow. She's lying dead in the water."

“Making repairs?” the First Mate asked as he joined his captain at the rail.

Catching sight of the unknown vessel lying off their weather beam, the captain shook his head. “Don't

see anyone on her decks.” He raised his eyes to the crow's nest. “What do you see, Haggerty?"

“Nary a soul moving on her, Sir. Looks deserted,” was the boyish reply.

“Stow that talk, Mister!” the captain snarled, shoving his First Mate aside as he strode away. “Mister

Tarnes!” he called out to the Second Mate, who was at the helm, “bring her about. Let's see what we've

“Aye, aye, Cap'n!” the sailor replied and swung the brass-rimmed teak wheel in a lazy arc to starboard.

Genevieve Saur pushed away from the taffrail of her brother's brigantine, The Wind Lass, and strolled

on legs well accustomed to the rolling dip of the seas, to the quarterdeck where her brother and his First

Mate were arguing. A smile dimpled her small face and she thrust her hands into the pockets of the cords

she wore when on board her brother's ship.

“You going to board her, ain't you?” Mr. Neevens, the First Mate, was growling.

“Aye, we're going to board her!” Genevieve's brother growled back.

Neevens shook his shaggy gray head. “Not this old tar! I ain't going aboard no ghost ship.” He screwed

up his weathered face and stuck out a pugnacious jaw to emphasize his point. “I ain't boarding no ghost

Genevieve grinned when her brother cast her a furious glance. She shrugged in answer to his silent plea

for help. She watched his gray eyes hardened with pique.

“We're going aboard her, Neevens, and that's the end of that!” Weir Saur shouted at his First Mate. He

fixed his winter gray eyes on his sister. “You coming?"

“Naturally,” Genevieve replied, eyeing Neevens with a pretend look of admonishment. “I don't believe in

“And what about beasties?” Neevens snapped. “You afraid of them, missy?” The old man held her gaze,

his whiskered chin thrust out, his watery eyes steady.

“There are no beasties on that ship!” Weir shouted. “Ghost, either!"

“You'll see,” the First Mate shot back. “You'll see!” He spat a thick stream of tobacco juice over the rail

and squinted his fading eyes at his employer. “You come back without a head attached to them smug

shoulders, Cap'n, we'll see who was right about beasties and such! You ever heard the tales of the

A vicious crosswind, aided by a troubled sea which was beginning to show signs of a coming blow,

heeled the Wind Lass over on the starboard tack and cold waves broke over the knightheads, shot high

in the air and dropped with a roar onto the forecastle as the brigantine made for the unknown vessel.

Looking windward, the Captain frowned and his voice was a curt bellow as he looked up into the

shrouds. “I want those topsails close reefed.” He turned his eyes down to his sister. “I don't like the

looks of that sky."

Genevieve turned her head and saw what had her brother concerned. The sky was a mottled gray;

darker streaks of yellow were shot through the lower section of sky, making the flesh of the horizon

Weir nodded, his mind on the nimble-footed sailors scurrying up the rigging. “Take in the topgallants

while you're at it!"

The Wind Lass slipped effortlessly over the heaving waves, a steady hand at her helm. She slid in beside

the unknown vessel and dropped anchor, riding the sea with a rolling pitch that left no doubt as to the

turn of the weather.

“You going with us or not?” Weir asked his First Mate as the old man peered cautiously over the

Mr. Neevens snorted, spat, and looked at his Captain. “Might as well,” he grumbled.

Genevieve hid a smile as she turned to study the other ship. There was no name on her bow, no

identification markings. Her hull had been painted black but here and there along the wood, great gouges

of paint had flaked away leaving gray streaks where the weathered wood shown through. Her rails were

tarnished, the wood chipped in places, some of her rigging flapping loose in the freshening wind. Her sails

had been furled, lashed down to the yards and masts, and the creaking timbers and the rub of the

“Where the hell is the crew?” Weir asked as he studied the decks, which looked as though they hadn't

been sluiced in a good many days. Salt was caked in the cracks of the decking, splashed up the masts.

The hatchway stood open, the darkness from below decks a sinister gash of silence.

There was a smell about the ship, an alien, somewhat malevolent aroma which seemed to make the eerie

quiet all the more prevailing.

“You ever smelled anything like that?” Mr. Tarnes, the Second Mate, asked his captain.

“Do you suppose the beasties had a barbecue last eve?” Genevieve quipped, elbowing Mr. Neevens in

“That'll do, Genny,” her brother cautioned, giving her a stern look from beneath his chestnut brows.

“Well, let's go on below and see what we can find,” the girl quipped, unconcerned by her brother's

fierce scowl. “There's nothing up here."

“You afraid of anything?” Mr. Tarnes snorted. He looked at the young girl with the look of a man

long-accustomed to dealing with precocious females.

“Well, I'll venture to say there are no snakes on board,” Weir growled as he walked to the hatchway.

He looked down into the darkness, and then with a deep breath, stepped gingerly down the

The cabins were empty, the galley devoid of provisions, and the captain's stateroom almost denuded of

both furniture and nautical charts and equipment.

“Pirates,” Mr. Tarnes said, nodding. “They was hit by pirates.” He looked around the great cabin.

“Took everything that wasn't nailed down and then some."

“That'd be my guess, Cap'n.” He poked among a pile of scattered papers on the captain's desk and

lifted a single sheet of parchment. Squinting his eyes, he read the paper, drew in a quick, troubled breath

and then handed it to Weir as though it were poisonous. “Sailing order, Sir."

Weir scanned the parchment. His brows drew together and he looked up at Tarnes. “A prison ship?"

“Ain't marked as such,” Tarnes told him, “but that there order says she was carrying prisoners bound for

Ghurn Colony.” A wry grin settled over the man's rugged features. “Looks like the pirates got them some

additional workers if this here lady was carrying prisoners."

Genny shivered. It wasn't that she was bothered by the mention of pirates; after all, wasn't that what she

and Weir had decided to take up now that they had lost their family holdings? Wasn't that why they were

out here in the middle of the South Boreal Sea learning the ropes from Tarnes and Neevens? What

bothered Genny Saur was the mention of the penal colony at Ghurn. If things didn't go right for her and

Weir, that was where he was bound to wind up. As for her, she'd swing from the nearest yardarm since

there were no prisons for women, only nunneries, and she knew gods-be-damned well she wouldn't let

them place her in one of those hell-holes.

“Did you hear that?” the First Mate suddenly squawked as he pushed up hard against Nathaniel Tarnes.

He grabbed the other man's arm in a punishing grip and plastered himself to Tarnes.

“Hear what, you old fool?” Tarnes snarled, pushing the First Mate away from him. “All I hear is your

“No,” Genny replied, looking at her brother. “I heard something, too."

Weir cocked his head to one side, listening. His eyes narrowed. “Aye, I heard that."

“Sounds like it's coming from the hold.” Tarnes shoved Neevens out of his way and ducked out of the

Captain's cabin and walked to the forward companionway which led the lower deck. He stopped,

listened. “Aye. It's coming from the hold."

“Could they have locked the crew down there?” Genny asked.

“We've been on this ship nearly an hour. Don't you think they'd have heard us board and have made

some noise before now?” Neevens inquired, his eyes jerking about for the beasties he expected to see at

“Could have thought the pirates had come back,” Tarnes told him.

“I ain't going down there,” Neevens informed them. He pushed himself against the cabin wall. “I just

Out of the Darkness by Babylon 5
War of the Sun by Maloney, Mack
A Question of Honor by Charles Todd
A Wicked Deception by Tanner, Margaret
Tom Paine Maru - Special Author's Edition by L. Neil Smith
Ablaze by Tierney O'Malley
Salvation (The Keepers of Hell Book 2) by James, Danielle
Death of a Valentine by Beaton, M.C.
Snare (Delirious book 1) by Wild, Clarissa
Upon the Midnight Clear by Sherrilyn Kenyon