Breaking Through (The Breaking Series Book 3) 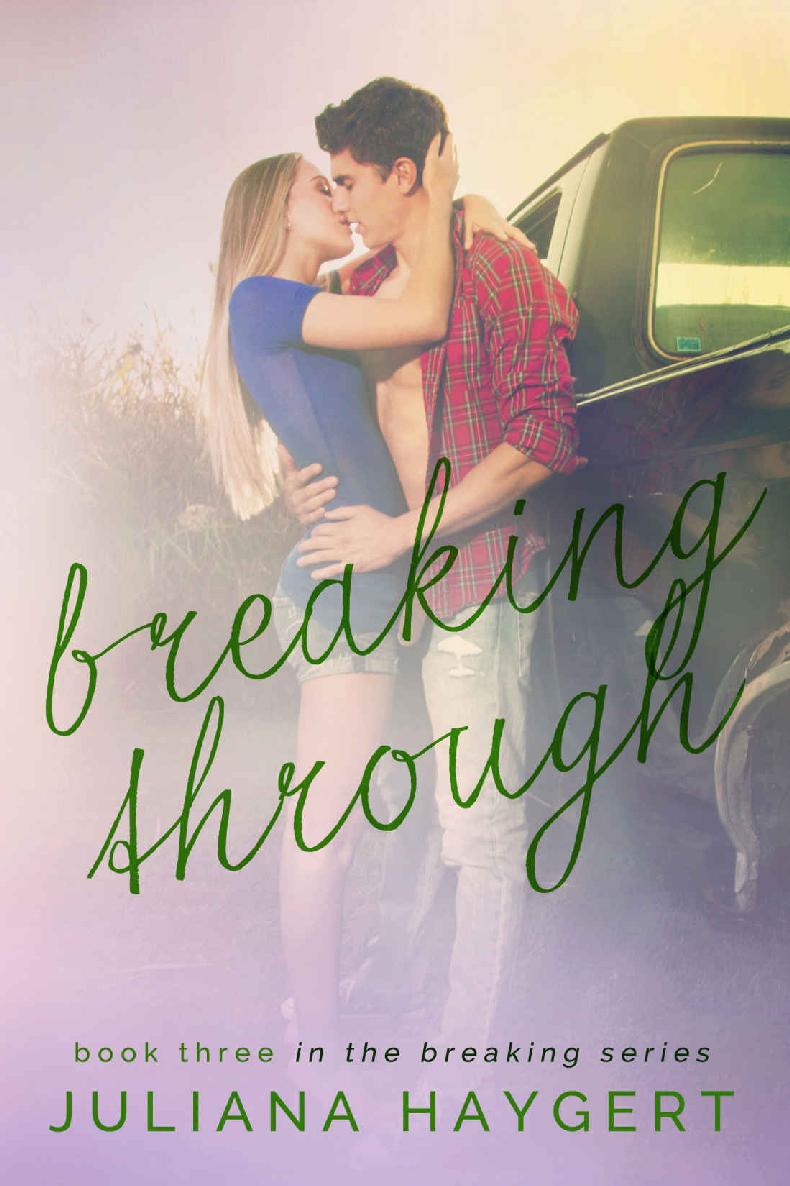 This book is a work of fiction. Names, characters, places, and incidents either are products of the author’s imagination or are used fictitiously. Any resemblance to actual persons, living or dead, events, or locales is entirely coincidental.

All rights reserved. This book or any portion thereof may not be reproduced or used in any manner whatsoever without the express written permission of the publisher, except for the use of brief quotations in a book review.

Manufactured in the United States of America.

Any trademark, service marks, product names, or names featured are the property of their respective owners, and are used only for reference. There is no implied endorsement if one of these terms is used.

Note that some words and expression don’t have a perfect literal translation. The translation you see here is the one that fits the context of my novels.

Beijinho – a sweet made with condensed sweetened milk

Bomba – item to drink chimarrão with

Brigadeiro – a sweet made with condensed sweetened milk and cocoa powder

Carreteiro – typical dish made of leftover steaks from barbecues

Chato – a name for someone who annoys you

Chimarrão – herb-based drink from the south of Brazil

Churrasqueira – a type of a grill where Brazilian barbecue is made

Cuia – kind of cup to drink chimarrão with

Eu não vou me atrasar – I won’t be late

Feijoada – dish made with black beans

Gaúcho(a) – people from the south of Brazil

Morena – brunette, but in Brazil this term is used in a caring way, like darling or sweetie

Prazer – Pleasure, a short way of saying “nice to meet you”

Que mentira – what a lie

Que porcaria
é
essa – what the hell is this?

Tche –
common expression used by
gaúchos – it can mean many things. A salutation, an exasperated exclamation, or even addressing someone

Tudo bem/Tudo bom – how are you?

Veado – deer. In Brazil, it’s a nickname for homosexuals. Between friends, it’s used as a friendly, teasing name.

Vestibular – an extensive and hard test Brazilians take to enter college – each college has its own vestibular test and if the student doesn’t pass it, he/she doesn’t enter that particular college.

Hannah shoved the halter and reins at me. “Go. The fourth stall to your right. It’s Belle. She’s easy and gallops fast. Just … hop on her, get her going, then put on the harness.”

“Just go.” She pushed me again and turned to the wall, grabbing another halter and reins for her. She retreated.

Still confused, I whirled on my heels and counted four stalls to my right.

A light brown mare stood behind the closed stall door, her ears alert. She wasn’t too tall nor did she look deadly, but that didn’t quiet my fear. And right now, I was swimming in a pool of fear.

I heard Hannah cursing. “Shit.” Then, she cried, “Argus!”

Okay, no time to overthink this. It was a question of life or death, and for my life, and Hannah’s, I would face this mare.

I opened the door and stepped in. The mare didn’t move.

“Hi, Belle,” I said, shaking for more than one reason. I wanted to ask her for permission to slide the halter above her head, but we didn’t have time for that. Still, my fear of horses stopped me from rushing to her and hopping on her.

The mare snorted, and I decided to take that as a sign that she was okay with me here.

I took a deep breath and did what Hannah would have done. I ran a hand over Belle’s neck, hoping she didn’t notice how much I was shaking, and pushed the halter on her head. Next, I flipped a bucket around, not caring about all the grain spilling on the ground, and used it as a step stool to mount. Without a saddle. Surprisingly, the mare didn’t rear or throw me off.

I tightened my hands around the reins and kicked her sides. “Go, Belle.”

We exited the stall and I pulled the reins, forcing Belle to a stop.

Pete, Eric’s bodyguard, entered the stable and the other man was closing in. Hannah grabbed a whip from one of the hooks on the wall and raised it in front of her like a sword.

Pete halted and pointed his gun at my sister. “Don’t move!”

She froze. I froze.

Hannah’s eyes met mine. “Go, Hil.” She lowered her head, stepped to the side, and brought the whip down on Pete’s arm.

The man cried out as he let go of the gun and cradled his arm. The second bodyguard entered the stable.

I extended my hand to Hannah, but she didn’t see it.

“Go, Hil,” she said, her eyes on the man pulling his gun from his waist.

“NOW!” she yelled, interrupting me.

I jumped, too afraid, too confused, too unsure. However, the mare had thoughts of her own. She turned her head to the back of the stable, pulling against my reins. I loosened my grip and let her take control. The mare took us out through the back gate.

As soon as she stepped out, Belle broke into a faster pace and I hissed, holding on with all I had. Struggling not to fall off, I looked over my shoulder, trying to see Hannah, but Belle turned to the right, taking the back gate from my sight.