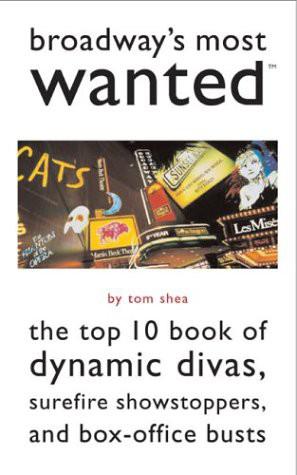 Published in the United States by Potomac Books, Inc. All rights reserved. No part of this book may be reproduced in any manner whatsoever without written permission from the publisher, except in the case of brief quotations embodied in critical articles and reviews.

With Their Awful Clothes and Their Rock-and-Roll

I Can’t Do the Sum

10 Musicals Based on the Comics

It’s a Hell of a Town

Again, from the Top

The Wages of Sin

Fill the World with Ships and Shoes

That Was a Flop?

Movies about the Creation of Musical Theater

10 Broadway Musicals You Could Eat

Every Movie’s a Circus

I Think I Can Play This Part

10 Broadway Performers Who Did the Movie Version

All Hail the Political Honeymoon

10 Musicals about Politics and Politicians

Don’t Fence Me In

Bring the House Down

Pop Stars Who Crossed Over to Broadway

Come Back to Me

10 Hollywood Stars Who Crossed Over to Broadway

I Love a Film Cliché

Movie Musicals that Made It to the Stage

We Sail the Seas

10 Musicals Set on the Water

Depictions of Faith in Broadway Musicals

It’s Better with a Bard

10 Musicals Based on Shakespeare

You’re Responsible! You’re the One to Blame! It’s Your Fault!

10 Musicals to Scratch Your Head Over

Wig in a Box

10 Musicals about Other Art Forms

Parents and Children in the Musical Theater

Where Did We Go Right?

Am I My Resumé?

All We’ll Do Is Just Dance

Hard to Be a Diva

All Things Bright and Beautiful

10 Musicals about the Animal Kingdom

Historical News Is Being Made

Playbill for
The Mystery of Edwin Drood

Playbill for
Into the Woods

Playbill for
Too Many Girls

Backstage at
The Pirates of Penzance

How to Succeed in Business Without Really Trying

Playbill for
City of Angels

Lara Teeter and Christine Andreas,
On Your Toes

This is my first book, and trust me, it’s no day at the beach writing one, even when it’s a subject as close to the heart as musicals are to my heart. (For the record, I do live near the beach, but sand gets in your computer, so I don’t recommend writing there.) No one who creates does so alone, and there are many people I have to acknowledge for their direct and indirect assistance in the creation of
Broadway’s Most Wanted.

First of all, my editor, Don Jacobs, at Brassey’s. Thanks for the opportunity and all your help. Don McKeon at Brassey’s was also of great help to me. My brother, Stuart Shea, was my road grader and not only gave me the idea for writing this book; his assistance in its assembly has been invaluable and much appreciated. I urge you all to pick up his book in this series,
Rock and Roll’s Most Wanted.
Thanks, Stu. You’ll never know what it’s meant. My friends and colleagues Lara Teeter, Neda Spears, Francesca Peppiatt, Meghan Falica, Emir Yonzon, and Diane van Lente provided materials invaluable to the production of this book as well, and for that, they have my best thanks.

Personally, I would like to acknowledge the talented tap dance team of Mandelbaum, Mordden, Filichia, Gottfried, Green, Guernsey, and Suskin for their inspiration. The folks at Chicago’s Navy Pier, Light Opera Works in Evanston, Illinois, and the folks at Porchlight Music Theater, Bailiwick Repertory, and City Lit Theater in Chicago kept me sane (and working) during the writing of this book. If you live in or around Chicago, see something at each of these theaters right now. To my friends Jeanne Arrigo, Gretchen Wilhelm, Michael Kotze, David Hoth, Rebecka Reeve, Julie Boesch, Shaun O’Keefe, Henry Odum, Kara Chandler, James Pelton, Don Shell, Page Hearn, Doug MacKechnie, David Breslow, Denise McGowan, Mary Lou Doherty, George Light, and Cecilia Garibay, my love and thanks. To my sweet Macheath, who couldn’t be less like his namesake, I love you. To Richard P. Hoffman, Michael and Candace Pufall, Sandi Phillips, Sandra Franck, Philip Kraus, and Hub Owen, for auld lang syne. To absent friends, I can only send you my love and everlasting thoughts. My family has always been behind me, Stu, Ceci, John, and especially Mom and Dad.
Saecula Saeculorum.

Finally, to those who make the musical theater, the writers, actors, choreographers, scenic artists, tech folk, stage managers, producers, and audiences: You make my world better with your efforts, and this book is for you.

I only hope it’s worthy.

I guess it was Gilbert and Sullivan that started it all. My parents both appreciated the genius of the English duo, whose deceptively lighthearted comic operas set the tone for everything that was to follow in the musical theater. That appreciation rubbed off on my brothers and me very, very early, and soon enough, cast albums of
West Side Story, Oklahoma!,
and even
Sweeney Todd
came home from the library. Pretty soon, my whole family was indulging the habit, buying not only
Finian’s Rainbow,
but
Greenwillow, Candide,
and
Follies in Concert
as well. I was hooked.

Okay, if any or all of the above makes no sense to you, Toothsome Reader, fret not. It’s just my way of saying I love the musical theater and have for a long time. It’s a unique art form, which, like all great art forms, has evolved (some would say devolved, given the current state of the art) over time, changing as the times have demanded.

Broadway’s Most Wanted
is a book to honor the creators, performers, and audiences who have made
the musical theater what it is today: the good, the bad, and the really, really ugly. When a show is a hit, the world is a wonderful place. But most show freaks will tell you that a bomb of a show, and I mean a real turkey, is as precious and enjoyable, in its own perverse way, as a hit. So you’ll find lists of The Bad and The Ugly as well as lists of The Good. It’s all so much fun, anyway.

Let’s get this out of the way right off: Broadway. For the purposes of this book, we use the term “Broadway” loosely, and not literally (i.e., the legitimate New York playhouses located between the low Forties and low Sixties on Manhattan Island in New York City). Think of it as the catchall to define all of musical theater. Broadway is obviously much more than musicals, and vice versa, but there you go. To limit the scope of this book to only those shows that have played Broadway would be to exclude, which is something as a writer (and, indeed, as a performer) I can’t abide. So you’ll find references to off-Broadway (like the all-time long-running champ,
The Fantasticks)
, regional theaters across the country (like
Casper, the Musical
and
Sylvia’s Real Good Advice),
and musicals from abroad (like
Chess
and
The Beautiful Game).

Hungry for Your Love: An Anthology of Zombie Romance by Lori Perkins
Final Inquiries by Roger MacBride Allen
The Wind Between the Worlds by Lester del Rey
The Striker's Chance by Crowley, Rebecca
Snatched by Pete Hautman
Cougar's Victory by Moxie North
The Bruised Thistle (The Order of the Scottish Thistle) by York, Ashley
Groomless - Part 2 by Sierra Rose
Sterling's Reasons by Joey Light
The Last White Knight by Tami Hoag