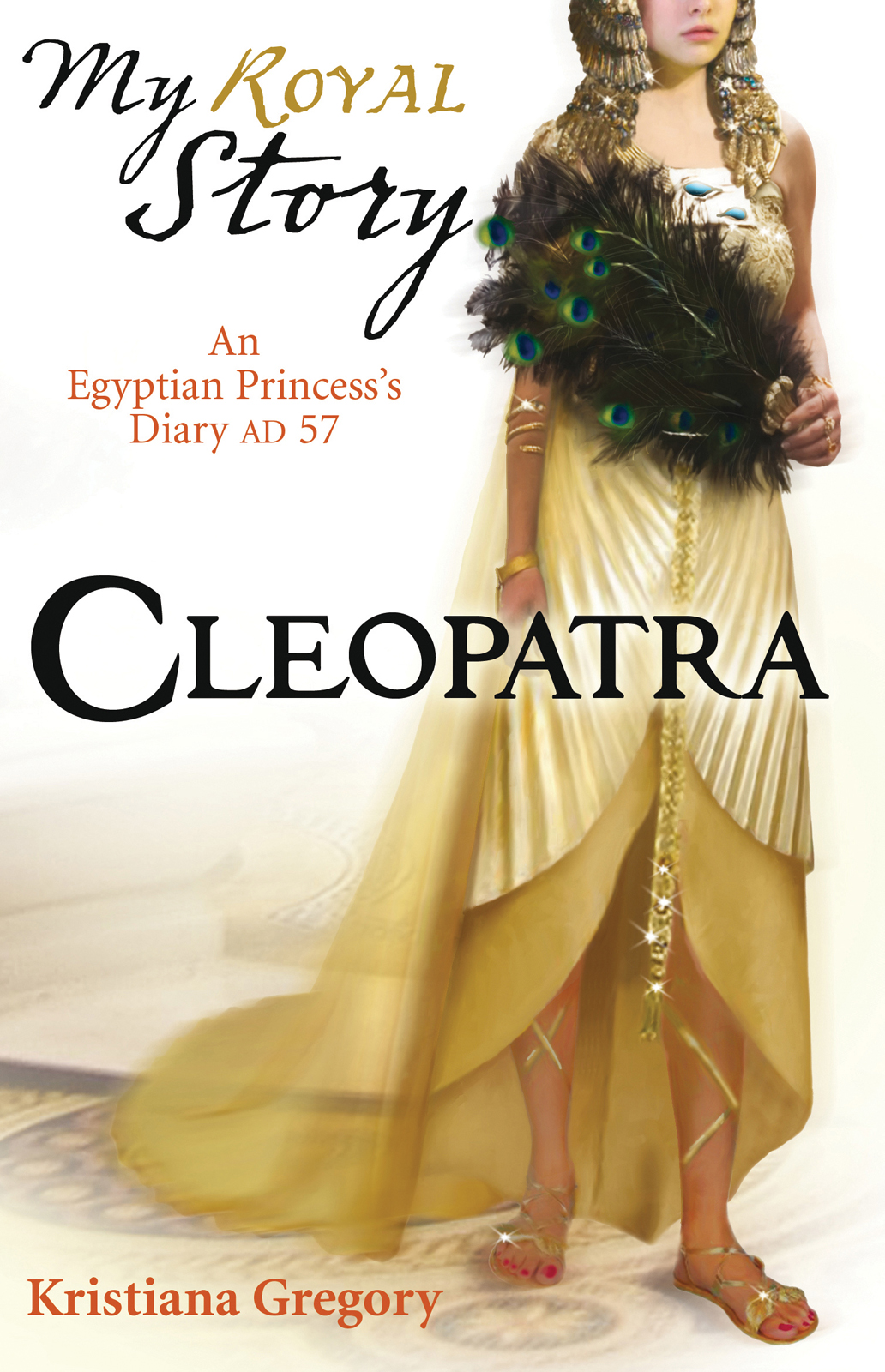 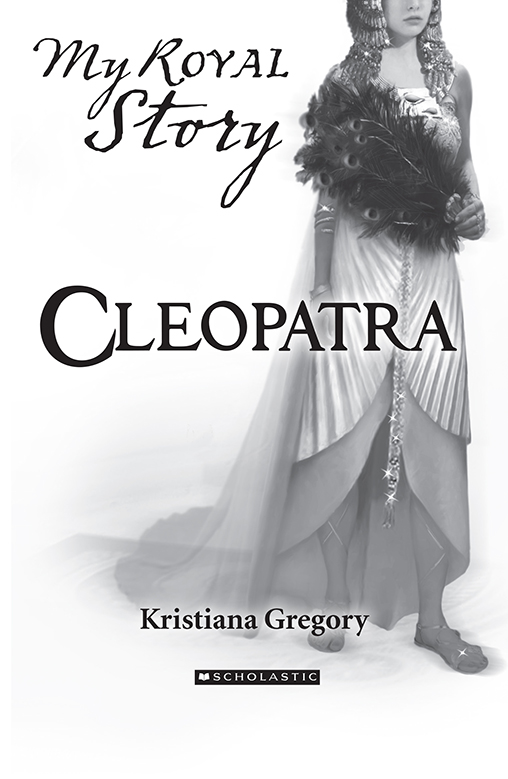 Dedicated with much love to my father, Hal Gregory,
whose appreciation of ancient literature gave me the courage
to peek at Plutarch and all the rest.

2 Aprilis: On the island of Malta

23 Junius: In the seaside town of Herculaneum

8 Martius: Aboard the royal ship
Roga

16 Martius: The royal palace of Alexandria

12 Junius: Aboard the royal barge
Isis

I, Cleopatra, Princess of the Nile, write this in my own hand.

Many rooms in the palace are mine, but this small one at the northeast corner is my favourite. It overlooks the sea. Waves beat wildly against the shore, for another storm is upon us, our fifth this winter. The clouds are dark. Even wrapped in my chiton, I feel cold.

It is most urgent that I record the troubling events of this week. Father has gone into hiding, having fled for his life. Though it is the twenty-third year of his reign, he is in danger of losing his throne. He is, of course, King Ptolemy Auletes, honoured pharaoh of Egypt.

Three nights ago while Father slept, a deadly puff adder was found curled at the foot of his bed, ready to strike. Father's old eunuch Mento, who sleeps on the floor next to him, was awakened by a hiss. He threw himself on the snake and tried to strangle it, but was bitten on the wrist. He died in torment a few minutes later. Father watched the snake slide off the bed and across the marble floor. As I write this, it has not been caught.

Because he mourns Mento, his beloved slave since boyhood, Father has refused comfort. When wine was brought to him this morning, with hopes it would make his heart merry, the royal cupbearer seemed nervous, for as he held out the tray the goblet rattled.

“Why are you shaking?” Father demanded. When the man did not answer, Father angrily motioned for the cupbearer to take the first sip, quickly, which he did.

I was standing behind a column, watching. When the goblet and silver tray fell to the floor, the crash echoed through the wide hall. I covered my mouth to silence my scream, but still guards came running.

The cupbearer lay in the puddle of wine, writhing in the agony meant for my father. Moments later he was dead. The poison was probably from the
eto
plant. It is as swift and deadly as a snake's.

Where Father has hidden and with whom, I do not know. His suite of rooms has been taken over by my eldest sister, Tryphaena, who has long admired the sweeping view of the sea from his balcony. Father's servants do not argue with her because she is as snappish and cold-eyed as a crocodile.

I do not trust Tryphaena. She wants to be queen and has mocked our father for being a poor leader, though how she became an expert on leadership I cannot guess. When I visited her late this afternoon, she was soaking in the heated pool that is in the centre of Father's atrium. Her maids were about her, pouring in fragrant oils and washing her back; others were airing out the silk bedcovers and pillows â it is no coincidence that her name means “pleasure seeker”. I recognized the high voice of her favourite male slave, singing from behind a lattice partition. He was playing a lyre, the small harp preferred in our royal court.

“What is it, little Cleopatra?” Tryphaena asked me, lifting her eyebrows with boredom.

“Where is Father?” I asked her. “When is he coming back?” To show her I was not leaving until she answered, I removed my sandals. A maid took them and handed me a linen towel. I folded it and placed it on one of the benches so I could sit without feeling the cold marble against my legs.

At this, my sister raised herself out of the pool. “You
dare
to sit in my presence?” she said. Two guards, who were standing on the balcony, took one step towards me, touching the swords that were strapped to their waists.

I am careful what I say to this sister. She is ten years older than I, and because I am just twelve, she rules over me by that fact alone. I lowered my eyes to show respect.

“When you are queen, Tryphaena, I will kneel before you.”

She sank back into the pool up to her shoulders then raised her hand, snapping her fingers. A Nubian girl wearing a brown tunic appeared with a tray. A goblet of wine and a bowl of figs were offered to me.

I could feel my insides shaking. Would this sister try to poison me? Yes, I believe so. As for my other older sister, Berenice â never! She and I adore each other even though I am eight years younger.

I took the wine and raised it towards Tryphaena as if toasting her, but really I was watching the liquid, looking for an oil perhaps floating on its surface, or powder sticking to the sides of the cup. If I suspected poison and tossed the wine into the pool, she would have her guards behead me on the spot. If it was indeed poison, one sip and I could die.

I raised the cup to my lips and tasted no bitterness on the rim. My eyes closed as I took the first sip, as if savouring such an excellent taste, but really my thought was,
O Isis, I am afraid.
But does Isis hear a girl's prayer? My heart raced as I drank, my stomach turned with nervousness, or was it from a fearsome death beginning in me?

Three sips later, I returned the goblet to the tray, then reached for a fig which I rolled between my fingers. It felt sticky. Tryphaena looked at me through narrowed eyes as a cat might look at a tiny bird, trying to decide if a capture is worth the effort. After a moment, she tipped her head back to soak her hair in the water. When her eyes closed, I returned the fig to the bowl and wiped my hand on my chiton.

A maid leaned over the pool with a tiny jar of oil, which she poured over Tryphaena's scalp then combed through her dark hair. I waited for my sister to speak, counting my heartbeats, a wonderful relief flooding over me that I was alive.

“Now then, Cleopatra,” she said, her eyes still closed for the dripping water, “what was it you wanted to know about our father?”

I stood and took my sandals from the maid. “May our father be blessed that you occupy his rooms,” I said.

Now it is twilight. The wind has quietened and I can see that the waves have also. The ocean is becoming a darker blue as night nears. O, where is Father? I hope he can see the lighthouse on Pharos Island. I know its bright light is meant for sailors approaching our harbour, but I think it is also for kings who sleep in a lonely place.

I am ready to put away this paper and cheer myself with a bath. First, I must check the underground fire room to make sure the slaves have not fallen asleep again. This is something that enrages Tryphaena. She demands they keep the coals going at all times, fanning hot air through pipes under the floors (so she can soak at any hour of the day or night).

Thinking of Tryphaena makes me tired. I hope she is elsewhere in the palace tonight, perhaps reclining on her couch in the banquet hall.
O Isis, let the wine put her to sleep quickly!

Arrow, my sweet old leopard, has jumped onto my bed, purring loudly. Her front paws are as big as my hands, and she is now licking those paws to wash her long, silvery whiskers. Moments ago, she finished eating a thick chunk of roasted lamb given to her by the royal cook.

“Good cat,” I tell her, stroking her huge spotted head, as I have every night since she was a kitten. Once I fall asleep, Arrow will leave my chamber to roam the dark gardens. Since she has just been fed, she will not bother our little cats who are out hunting mice and beetles.

But woe to intruders: a leopard hides in the shadows of our palace walls.

This morning, early, I slipped out to the tomb of King Alexander the Great, the founder of our city. It is near enough to the palace so that I was back before my sisters were awake.

The building is marble with open sides and steps leading down to the tomb, candles on every ledge. Because guards are here day and night, it is safe for me to come by myself.

I knelt at the side of his coffin. A glass dome covers it, but the glass is an older type, pitted with sand in places and rippled, as if one were looking through dark water. When Alexander died of a fever in Babylon, his body was brought back to Egypt and embalmed in the same manner as our pharaohs. The embalmers painted his cheeks and lips red. His hair is a golden yellow with an orange tint above his forehead. If this is paint, I do not know. Though he is a mummy, he still appears to be about thirty years old.

Alexander lies on his back, his hands folded across his chest, wearing an embroidered Persian vest buttoned at his waist. A skirt made of thin leather strips comes down to his knees. Draped over his shoulder is a beautiful scarlet cloak, the wool still untouched by moths. I wish I could see what type of sandals he is wearing, but a shield of hammered gold covers his feet.

Did I mention that Alexander the Great has been dead for nearly three hundred years?

Father says there are ancient Hebrew prophecies about a king, a messiah, who will bring peace and forgiveness. This king will have lived for a time in Egypt. When he dies, his body will not decay. He will rise from the dead, and all other kings will bow down to him. All nations will serve him; the government will be on his shoulders.

Some people in this city believe that because Alexander already conquered so much of the world and was in Egypt, he might be the messiah, thus the many guards to protect his tomb.

I keep coming to look at Alexander, to see if he shows life. Not yet. (If the glass breaks, will he start to rot?)