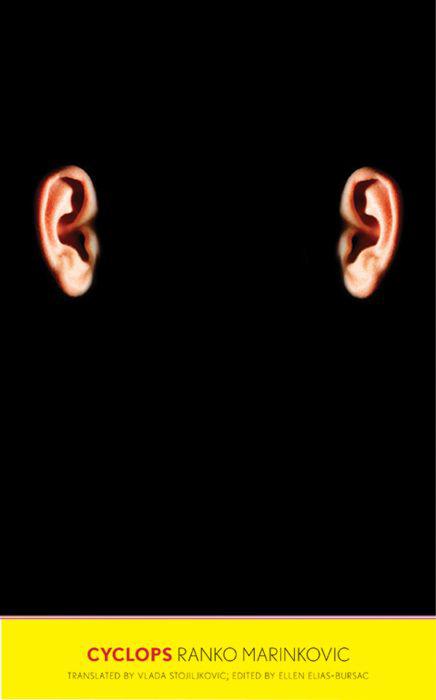 The Margellos World Republic of Letters is dedicated to making literary works from around the globe available in English through translation. It brings to the English-speaking world the work of leading poets, novelists, essayists, philosophers, and playwrights from Europe, Latin America, Africa, Asia, and the Middle East to stimulate international discourse and creative exchange.

Copyright © 2010 Estate of Ranko Marinković. Originally published in Croatian by Prosveta, Beograd, 1965, former Yugoslavia. All rights reserved. This book may not be reproduced, in whole or in part, including illustrations, in any form (beyond that copying permitted by Sections 107 and 108 of the U.S. Copyright Law and except by reviewers for the public press), without written permission from the publishers.

Set in Electra and Nobel types by Keystone Typesetting, Inc.
Printed in the United States of America.

A catalogue record for this book is available from the British Library.

This paper meets the requirements of ANSI/NISO Z39.48-1992 (Permanence of Paper).

Making his way through a crowded Zagreb square one evening on the eve of World War II, Melkior Tresić catches sight of a priest with familiar, jutting ears. The priest, we learn, had taught him catechism during his childhood in Dalmatia. The fleeting glimpse of the Dalmatian priest in the opening pages of this quintessentially Zagreb novel is Ranko Marinković’s nod to his native Dalmatia. The nod tells us that Melkior Tresić is an outside insider, someone who, like Marinković, came to the city as a student, and who sees Zagreb as someone born there never could. Marinković captures Zagreb’s crowds, the shysters, the army barracks, and the seedy neighborhoods in one of the most famous fictional portraits of the city, yet he peoples the novel with a closely knit group whose playful jibes and cheerful ignorance of the portentous events taking shape around them have a certain resonance with the insular Mediterranean culture in which he was raised.

When Marinković set out to write
CYCLOPS
in the early 1960s he was thinking big. In shaping his plot he reached for the big writers, such as Joyce (whose
Ulysses
had first been translated into Croatian in 1957), Homer, Shakespeare, and Dostoyevsky. For all the influence of other literatures, however, the novel is anchored firmly in a more local context. The story unfolds on the streets between the Zagreb main square and the Opera House, and the streets and cafés are inhabited by the poets, actors, and other public figures of Marinković’s student years in Zagreb. Along with the readily identifiable references to Hamlet and Leopold Bloom, the narrative and dialogue are interwoven with allusions to various Croatian writers and their characters and to verses of Croatian poets—all unfamiliar to American readers, including Ivan Gundulić,
1
Ivan Brlić-Mažuranić,
2
a character of Krleža’s,
3
and lines of verse by Vladimir Nazor,
4
Vladimir Vidrić,
5
Ivo Vojnović,
6
and Tin Ujević,
7
—as well as mentions of equally unfamiliar Serbian writers such as Simo Pandurović
8
and Jovan Dučić.
9
The panorama of Zagreb life in the opening pages of the novel, the MAAR street advertisements, the vendors selling shoelaces, are authentic images of Zagreb life of the late thirties, and
Jutarnji List
(
Morning News
) is still hawked by vendors on Zagreb’s streets.

There are many comparisons that can be drawn between
CYCLOPS
and other works of literature, most obviously
Ulysses
, the
Odyssey
, and
Hamlet.
But the irreverence, irony, and satire with which Marinković dissects Zagreb cultural life on the eve of World War II also resonate with Joseph Heller’s
Catch
-22 (1961). Heller’s biography affords a surprisingly productive comparison with Marinković’s. They both were playwrights and short-story writers, as well as novelists, and they were close in age. Heller fought in active combat in World War II, unlike Marinković, who spent the war as an internee and refugee, but both of them were the first, for their respective readerships, to write of World War II in a darkly humorous vein. And they were each known chiefly for their first novel, each of which became a huge best seller, never to be outshone by anything else they later wrote.

The year
CYCLOPS
was published (1965) was pivotal for postwar Yugoslavia. It followed on a period of furious economic growth during the late 1950s and a repressive spell that came after Yugoslavia’s break with Cominform in 1948. There were major economic reforms in 1965, and the next year saw the dismissal of the Minister of the Interior, Aleksandar Ranković, over a wiretapping scandal, which became the symbolic end of the immediate postwar period. The Yugoslav government began allowing its citizens to travel abroad freely in 1966, thereby setting itself apart from the Eastern European countries that were still “behind the iron curtain,” and these political and economic reforms were accompanied by a thaw in culture. After a brief spell of socialist realism in the early fifties, the literatures in Yugoslavia had asserted a modicum of artistic independence, but only within limits (there could be no mention of the Goli Otok and other prison camps, or articulation of nationalist and separatist sentiments, or scurrilous mention of the person of Josip Broz Tito). The limits relaxed somewhat in the 1960s, which was a decade for ferment in all the arts.

Marinković’s
CYCLOPS
, published in the midst of all this, and
Death and the Dervish
, by Meša Selimović, which appeared a year later, were groundbreaking novels that brought new intellectual depth to the treatment of controversial issues, such as, in
CYCLOPS
, the use of irony and satire in the treatment of the recent war, and, in
Death and the Dervish
the nature of repressive authority. As soon as it appeared,
CYCLOPS
was showered with accolades, including the NIN award—the most prestigious recognition for literary works in the former Yugoslavia,
10
and the same happened with
Death and the Dervish
the following year.

To say that Marinković raised eyebrows with his ironic treatment of the war theme in
CYCLOPS
is not to suggest that there had been no antiwar Croatian prose before him. Miroslav Krleža, in particular, is famous for his antiwar stories after World War I. Where Marinković broke new ground was in his use of irony and satirical humor to transgress the various strictures imposed by the victorious Partisans on how the conflict would be described in the years following the war. But it was precisely the madcap brand of humor, the sly nicknames used by the denizens of Zagreb’s cafés, the fantastical tales of shipwrecked sailors confronted by cannibalistic natives in the South Pacific, the ingenuity with which Melkior Tresić keeps himself out of combat, that gave the novel its irresistible charm and steered it through the sensitive political waters of the day.

Marinković studied psychology at Zagreb University in the 1930s. He was intrigued by the psychology of the artist and was drawn, in particular, to Tin Ujević’s verse and the workings of the poet’s psyche. While still a student, he published three brief articles
11
on Ujević,
12
in which he remarks on “something mysterious, special and remarkable, almost unintelligible” in Ujević’s personality.
13
Marinković credits Dostoyevsky with having a formative influence on Ujević’s preoccupation with suffering, humiliation, and pain. He wonders whether Ujević’s bohemian eccentricity is a form of mental illness, and concludes that with an ear for the right resonance one could enter into this complex, chaotic psychology. Marinković also describes the way Ujević represents love and the feminine in his verse, saying that Ujević is a poet of “spiritual love, the erotic turned mystical, stripped of its sexuality, love that is felt with a sixth sense, like music,”
14
a poet who perceives woman as a symbol of “creative mystery.”
15
Marinković and Ujević got to know each other later, and there are several Zagreb anecdotes stemming from their relationship, particularly that Marinković dubbed Ujević the Baudelaire from Vrgorec, while Ujević’s nickname for Marinković was the Voltaire from Vis (each man’s respective birthplace).

Only a few chapters in
CYCLOPS
feature the Ujević-like character Maestro, but Maestro’s spirit and his relationship with Tresić permeate the entire novel. For all his curmudgeonly manner, Maestro has an abiding fondness for Tresić, and chooses him as the only person from their circle he can trust. Theirs is the principle emotional relationship of
CYCLOPS.
Another vestige of Ujević’s is the mystique attached to the name “Viviana,” which personifies the feminine “creative mystery” in Ujević’s poetic.

In the immediate postwar years Marinković was one of the rising stars in Zagreb cultural life, active in the theater and in publishing and teaching, while in the same period Ujević was working only as a literary translator, having been banned for five years by the Writers’ Association from publishing his own poetry and essays—punishment for accepting employment from the fascist regime as a translator during the war. Marinković was among those who saw to it that Ujević always had enough translation work to support him during this time. Harold Bloom alerts us to the dynamic that often shapes relations between younger generations of writers and the powerful figures of previous generations. Ranko Marinković was not a poet, so he was not competing directly with Ujević’s looming influence, but this dynamic is also worth keeping in mind when parsing his portrait of Ujević in the character of Maestro.

Marinković is frequently hailed for his irony and the psychological and social analysis he brings to his stories, novels, and plays, but, as several recent critics have remarked, there is room for more scholarship on his work. As one scholar comments,
“CYCLOPS
, the novel by Ranko Marinković published in 1965, is regularly accorded a distinguished place in critical and historical surveys of Croatian literary modernism, but this claim is supported by a somewhat tautological argumentation. Namely, instead of insisting on the stylistic excellence of Marinković’s writing and the vivid elaboration of the characters, Croatian criticism hardly ever moves beyond discussing the plot.”
16

Untimely Graves by Marjorie Eccles
Back in the Bedroom by Jill Shalvis
Forced Out of the Darkness by Jackson Jr, G. Wayne
Ripper by Michael Slade
The Last Boy and Girl in the World by Siobhan Vivian
College Boy : A Novel (9781416586500) by Tyree, Omar (COR)
Everything You Want by Like, Macyn
A Haunted Twist of Fate by Coverstone, Stacey
No Rest for the Wicca by LoTempio, Toni
Cannon (A Step Brother Romance #3) by Sabrina Paige