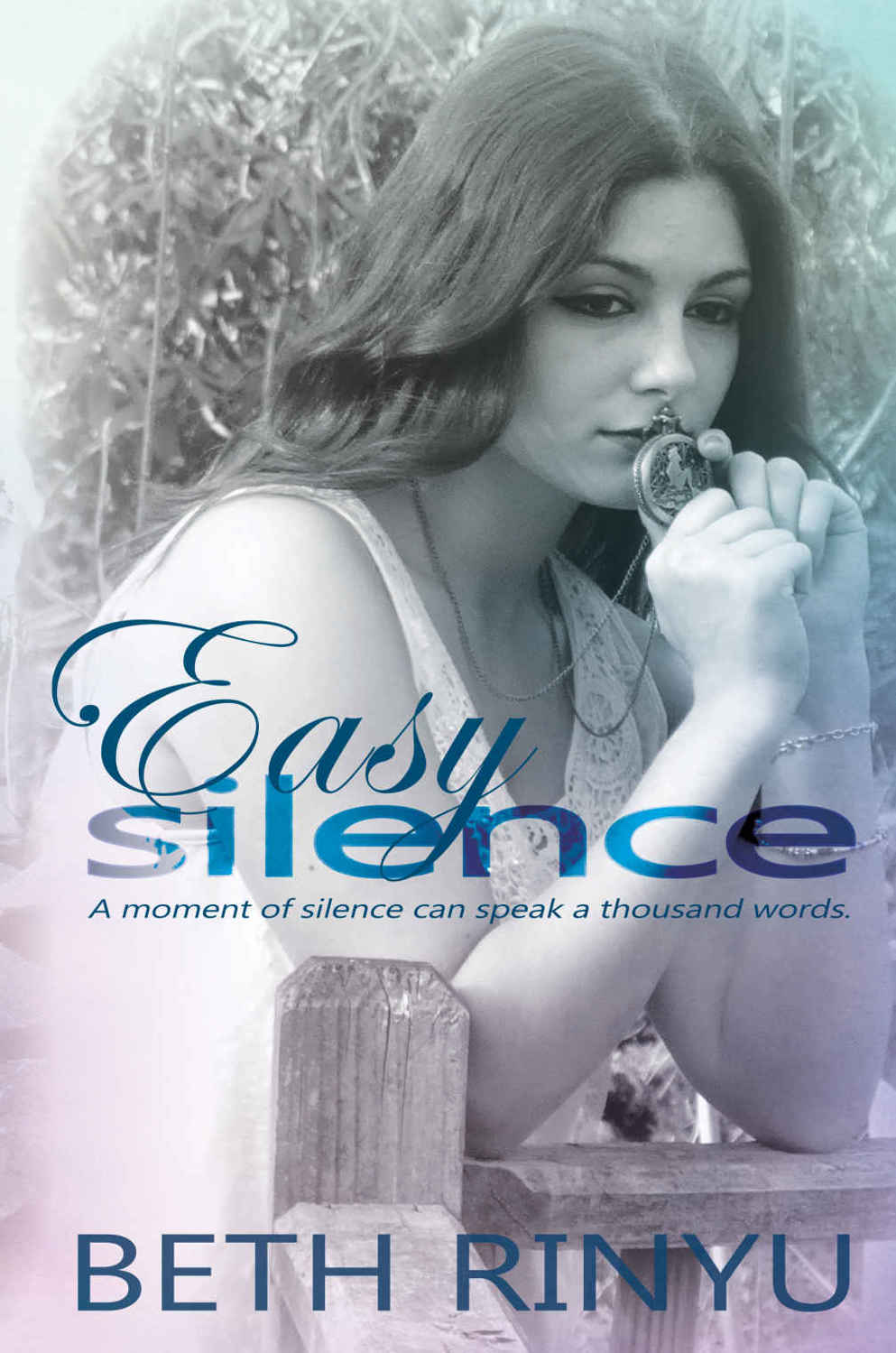 This is a work of fiction. Names, characters, businesses, places, events, and incidents are either the products of the author’s imagination or used in a fictitious manner. Any resemblance to actual persons, living or dead, or actual events is purely coincidental.

This book or any portion thereof may not be reproduced or used in any manner whatsoever without the express written permission of Beth Rinyu, except for the use of brief quotations embodied in critical articles and reviews.

To all of my readers who inspire me to keep doing this…Thank you!

A while back I had given some advice to a new author that had emailed me:

Write the story for yourself, the way that you want it to be told, as if no one else will ever read it. Don’t worry about reviews, sales, rankings and all of the other stuff that comes along with it. Writing from your heart is more valuable than any amount of money you will ever make, and it will reflect in your story. Don't be afraid to pour out your heart and soul with your words. If you do it well enough, the reader will become immersed into your fictional world, and all they will see are the characters that you've created, while feeling the emotions that they are going through.

I followed my own advice with this one…This story was written 100% from my heart…and I don’t regret it one bit!

Sometimes people enter our lives, leaving an imprint forever embedded in our hearts. They serve a purpose, however short that time together may be.

I will never forget the first time I saw him standing all alone on the beach. His dark hair was blowing in the breeze, and a cigarette was hanging from his mouth. Normally, that would be a turn off to me, but there was something mysterious about him…something that made me unable to look away, even though a small part of me was saying to run as fast as I could. I seemed to be drawn to this stranger by some unforeseen force. The cool salty mist veiled my face, causing a strand of my long brown hair to stick to my cheek. I slowly inched closer, startling him as he turned around to face me. His steel blue-grey eyes locked with mine, and in that instant, I knew my heart would never be the same again.

Was it crazy?
Maybe.

Was I scared?
A little.

Had I ever been this forward with a stranger before?
Never.

I stood there silently as we slowly looked each other over. A large purple ring encompassed his swollen left eye, and as I glanced downward I noticed that his upper lip was equally swollen.

“Are you okay?” I finally found my voice. He nodded and looked away, silently staring out at the water, taking another drag of his cigarette. “My—my grandmother’s house is right up there.” I motioned up to the beach cottage just a few feet away. “I could get you some ice if you need it.”

His mouth turned up in a smile. It wasn’t one of gratitude; in fact it was just the opposite, cold and callous. “What makes you think I need ice?” he snapped.

My heart began to race as I nervously pointed to my own eye. “It’s just…your eye. It’s all swollen.”

“Go back to your perfect life with your perfect family and your perfect house, and don’t worry about me. I can take care of myself.” I was in shock as I stood there quietly staring at him. I knew I should just do as he said. He wanted to be alone, and my presence was clearly annoying him. “Did you not hear what I just said? Leave!” he said raising his voice. His eyes met mine once again, and I finally relented, giving him his wish.

I walked along the edge of the ocean for what seemed like forever before finally taking a seat in the sand, still a little rattled from the abruptness of that stranger. Who was he to judge my life? He knew nothing about me. If he did, then he would know that my life wasn’t perfect…far from it. I looked out at the water, trying my best to calm down from my recent encounter. The waves crashed onto the shore with full force. There had been red flags up all over , warning swimmers to stay out due to the rip currents caused by a passing storm that was out at sea. Sadly, the loud roar and velocity of the ocean were more warm and welcoming than my life. I stood up and walked to where the waves were breaking, wondering if anyone would even notice if I were to be taken away forever. Probably not. If anything it would just be an inconvenience for my parents, causing them to take time from their political agenda to mourn the loss of a daughter whom they didn’t even really know. Being the daughter of Senator Maxwell Carmichael wasn’t an easy task. To outsiders looking in, it appeared to be a piece of cake. I was given everything in life…a top education at one of the most prestigious all-girls boarding schools, a brand new car when I got my driver’s license, and I was a soon-to-be freshman at Georgetown University studying international affairs because that’s what my father wanted me to do. And in return, he demanded perfection. I wasn’t allowed to act like a normal teenage girl, for fear I may do something that would embarrass him. So, I basically shut myself out of the social scene all through high school with my only outlet being the drama club. My dream was to become an actress. Acting was my passion. In addition to drama club, I took acting lessons during my summer breaks. My father scoffed, never allowing me to pursue that dream, calling it a “hobby,” but to me it was so much more. It allowed me to become a different person, even if for only a few minutes. I was able to escape the loneliness that was my life. As I stepped into the water further and looked out at the horizon, I couldn’t help but think my parents were on the other side of this great big ocean. If I had my days straight, they were in London at the moment. They were spending the summer in Europe, traveling to a slew of countries. I once again chose not to go, but this summer instead of staying at my home in Maryland with our housekeeper, who was more like a mother to me than my own, I decided to spend the summer with my grandmother at her beach house in North Carolina.

Grandma Caroline was my rock. She was always there for me. I knew if I needed her, she was only a phone call away. It saddened me to see her now. She wasn’t the same strong woman I knew my whole life. Alzheimer’s had taken her away, and as her condition continued to deteriorate, my father continued to throw money at it, instead of spending time with his mother like he should have been. He had hired a live-in companion to care for her in addition to Hadley, her live-in housekeeper, who over the years had become more of a friend to my grandmother than an employee. I was willing to postpone my first semester of college to stay and help take care of her, but my father was adamant that I go to school. Part of me wanted to stand up to him. I was eighteen years old and no longer a child, but I still continued to allow him to treat me as such. I was so deep in thought that I hadn’t realized the undertow had pulled me out. Panic began to take over as the tide carried me further, and my attempt to swim back to shore became fruitless. The lifeguards and all of the beachgoers were gone with it being early evening. I was going to die alone in this ocean, and no one would even know it. The waves were merciless, coming one right after another, not even allowing me to catch my breath. My throat began to burn from the salt water that I was unintentionally consuming, and my body twisted and turned like a rag doll, being no match for this powerful force. I tried my best to swim parallel to the shore line, but it was no use. The current was so strong and the waves too rough, crashing into me from every direction. At that moment I was prepared to die. I had given up. My body was too tired from fighting a losing battle. I was no match for this great big force, and I was surrendering. I submerged myself under the water hoping it would be over soon as the waves above me continued to roll. All I could think of was how angry my dad was going to be at me for this. His trip was going to be interrupted to attend my funeral. I surfaced once again, while gasping for air and taking in more salt water in the process. I didn’t know what was happening when I felt someone grip me tightly from behind. I tried do wiggle out from the hold that was on me, but just like the waves, it was of no use.

“Stop fighting me,” a voice shouted from behind me over the ferocious sea. I did as the voice said, wondering if an angel was carrying me to my death. I looked down at the strong muscular arm across my chest pulling me closer to shore and closed my eyes, knowing that my life was in this stranger’s hands. Once we reached the safety of the shore, I took a seat in the sand, coughing up the water that I swallowed, trying to get my surroundings straight. I turned my head in the direction of the mysterious voice to find the same boy who stood on the beach earlier and scolded me for trying to help him out.

Maybe I had died and gone to heaven, because as I got a closer look at him, I noticed he had the face of an angel. His messy wet hair that hung in his eyes dripped with beads of water that rolled past his extra-long and extra-dark lashes onto his full ruby red lips. He wasn’t handsome. He wasn’t cute. He was beautiful.

I was embarrassed and grateful, afraid to thank him, for fear he would snap at me like he had earlier. So instead, I extended my hand to him. “I’m Samantha Carmichael, but my friends call me Sam.”

He shook his head. “Really?” he replied in the same sarcastic tone he had used with me earlier. He finally caught his breath and stood up.

Mummy Dearest by Joan Hess
Songs of Blue and Gold by Deborah Lawrenson
Under a Blood Red Sky by Kate Furnivall
FOREWORD by Dean
When the Game Was Ours by Larry Bird
Slipping Into Darkness by Peter Blauner
Saint Peter's Soldiers (A James Acton Thriller, Book #14) by J. Robert Kennedy
Until You Are Dead by John Lutz
Los intrusos de Gor by John Norman
Bayon/Jean-Baptiste (Bayou Heat) by Wright, Laura, Ivy, Alexandra