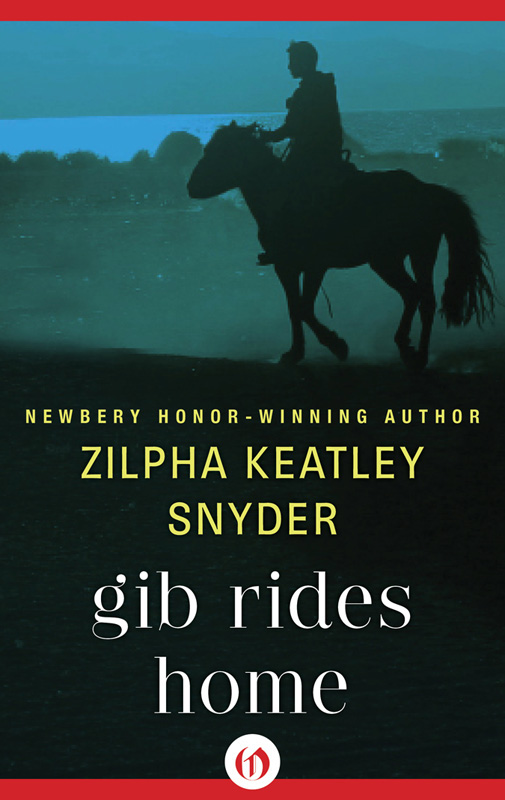 To the memory of my father, William Solon Keatley

A Biography of Zilpha Keatley Snyder

O
N A DARK, CLOUDY
afternoon in the fall of 1909, a strange thing happened on the third floor of the Lovell House Home for Orphaned and Abandoned Boys. Something so downright mysterious that even firsthand witnesses could scarcely believe their eyes. What those witnesses, five amazed and startled senior boys, saw that dull, gray afternoon was the sudden and entirely unexpected reappearance of a boy who had left the orphanage more than a year before.

No one had heard from Gibson Whittaker since he went away, but the rumor was that he had been adopted by a family who lived near Longford, a small cattle town in the next county. There was nothing especially uncommon about that. Half, or even full, orphans left Lovell House fairly often, going back with a remaining parent or out to an adoption, but what was so shocking was his reappearance. How could Gib Whittaker be strolling into the senior boys’ dormitory when the law said, at least the law according to Miss Offenbacher, that Lovell House adoptions were not reversible? In other words, when you left the orphanage you left it for good and always.

The sun had already gone down when Gib arrived, and the third-floor Senior Hall was dimly lit. The supper bell was due to ring soon and the long hall, with its orderly rows of narrow beds, was almost deserted. Of the sixteen boys who were seniors that year, only five were in the room and they were running late. Since they’d spent their afternoon chore time mucking out stalls in the orphanage’s barn and cowshed, more than the usual amount of changing and scrubbing had been necessary.

Being late for supper was dangerous, but so was arriving at the table in an unsanitary condition, so the situation was serious, but not quite serious enough to prevent a certain amount of fooling around. Some shoving and splashing was going on as the five boys crowded around the washbasin nearest the hall door. The water in the basin was cold, and gasps and giggles were echoing through the high-ceilinged room, when the shriek of door hinges caused a sudden silence. As one, the gigglers hushed, froze, and then turned anxiously, expecting Mr. Harding, maybe, or even Miss Offenbacher. But instead, there he was, Gibby Whittaker.

For a second, no more than a split second probably, nobody recognized him, not even Jacob Fetters and Bobby Whitestone. And Jacob and Bobby had known Gib since back when they’d been little old juniors together.

But under the circumstances, Bobby and Jacob’s blank stares weren’t too surprising. After all, Gib had been ten years old when he went away and now he had to be almost twelve. He’d filled out a little, gotten some taller, and no longer had the typical Lovell House haircut—a near scalping by a local barber whose “orphans’ special” was quick and cheap, if not particularly good to look at.

He was dressed differently, too. Instead of the scratchy wool suit of institutional navy blue, he was wearing a fringed leather jacket over mud-stained denim pants. And on his feet, instead of the standard orphanage clodhoppers, were a pair of boots. Scuffed and dusty boots, certainly, but with a style about them that had nothing to do with living in an orphanage, or for that matter anywhere else in downtown Harristown.

So the hair and clothes were different all right, but there were some things about Gib Whittaker that weren’t ever likely to change. He was still lanky and tall for his age, with a slow and easy way about him, and a grin that did something to his eyes before it began to stretch first one side of his wide mouth and then the other.

So it was Gib sure enough, right back there in the third-floor dormitory where nobody had ever expected to see him again. But what made his reappearance even more amazing was what he’d brought with him. What Gib Whittaker was toting into the seniors’ dormitory, along with an ordinary old duffel bag, was what appeared to be an honest-to-God saddle. An honest-to-goodness old roping saddle.

“Gibby,” somebody finally yelped, Jacob or Bobby probably. Gib grinned, and then, while the others stared like a bunch of dummies, he sauntered down the hall, dumped the bag and saddle on the floor beside bed number five, shoved them under with one foot, stuck his hands in his pockets, and nodded, first at straw-headed old Jacob and then at skinny-as-ever Bobby Whitestone.

A new boy, someone Gib had never seen before, was poking Jacob and whispering, “Who—who—who,” like he’d been turned into some kind of big-eared, towheaded owl.

“Stop that, Jackie.” Jacob elbowed the new kid out of his way. “Don’t you know nothing? It’s Gib. Gib Whittaker.” But Jackie, who wasn’t especially quick-witted, went on staring blank-eyed. It wasn’t until Bobby Whitestone spoke up that Jackie and the other new boys began to understand. “You know,” Bobby said, “the Gib we told you about, who got adopted a long time ago.”

Jackie’s “Ohh! That Gib,” was long and drawn out as a sigh. They’d all heard about that Gib Whittaker.

Knobby-headed little Bobby Whitestone, who had been at Lovell House ever since Infant Room, was looking as walleyed as a wild mustang. Bobby had always been a worrier. And a whiner. His voice had a high-pitched wobble to it as he asked, “What happened, Gib? How come you’re back?”

Bobby had good reason to be worried about Gib and about what might happen to him now. Everybody knew how dangerous it was to run out on an adoption. Especially to run out on certain kinds of adoptions.

Jacob Fetters, who, like Bobby, had been in Junior Hall with Gib, looked worried too, his blotchy face scrunched up into a twitchy grimace. “Where you been, Gib?” he asked. “Miss Mooney said you’d been sure enough adopted by some people near Longford. Some real rich folk, name of ... Jacob looked around, asking someone to help him remember. “Name of ... ?”

It was Gib himself who answered. “Name of Thornton,” he said solemnly. Then he grinned at Jacob and added, “The Thorntons live pretty near Longford all right, and I guess they’re fair-to-middling rich. Miss Mooney got that part just about right.”

Jacob nodded, and his sympathetic shrug said he could guess what Miss Mooney had been wrong about—the kind of adoption it was.

“Yes sir,” Gib went on, his halfway grin hinting that there was something more to what he was saying than just the words, “I been with the banking Thornton family for almost—”

Gib’s lips twitched again. “That’s right. That’s what some people call them. The banking Thorntons. Own the only bank in Longford, matter of fact.”

“But how come you’re back, Gib?” Bobby’s coyote whine had gone higher and wobblier, and his jittery eyes kept flicking from Gib’s face to the saddle under the bed. “You didn’t skip out, did you?”

Gib’s eyes had a teasing squint to them as he answered. “You want to know if I just up and rustled myself a horse and saddle and ran off?” He looked around slowly, at Jacob and Bobby first, and then at each of the other boys, before he shook his head. “Naw,” he said, “I didn’t run off.” His smile spilled over onto his mouth as he added, “And I didn’t get here on horseback, either. Matter of fact, I came here in a motorcar.”

They stared back, their eyes showing how amazed they were, and how relieved to hear that Gib hadn’t done something so dangerous and foolhardy as to run away. At least Bobby and Jacob looked relieved. A couple of the other boys might have been—well, almost disappointed. The way they’d look, perhaps, if a public hanging they were planning to attend had just been called off.

Noticing how one of the new boys had started to ease off toward the dormer windows that faced Lovell Avenue, Gib’s smile got wider. “What’re you looking to see out there?” he asked. “A sheriff’s posse, maybe?”

The new kid looked guilty, but you couldn’t really blame him all that much. Wasn’t any wonder he was expecting the sheriff or maybe something even worse. Not after all the things Miss Offenbacher always said about what would happen to runaways.

“Well, what did happen?” Bobby was still whining. “How come you came back?” And then, as his eyes rounded again with a new and even more terrifying thought, “Offenbacher knows you’re here, doesn’t she?” he whispered, glancing over his shoulder. “You didn’t just sneak in, did you, Gib?”

Gib was just opening his mouth to answer when suddenly the whole room was full of a harsh clanging noise. All five of Gib’s observers jumped like scared jackrabbits, and then shrugged in embarrassment. Just that noisy old dinner bell, their sheepish smiles said, and with no further hesitation they all trooped out. Everyone but Jacob, who dashed back to give his face a last-minute splash before he rushed after the others, wiping his dripping chin on his shirtsleeves. Gib chuckled, remembering how Jacob always had to be extra careful because dirt showed up so much on his bleached-out skin.

Near the door Jacob paused long enough to ask warily, “You coming, Gib? You coming to supper?”

Gib shook his head. “Nope,” he said. “Not tonight. Miss Offenbacher said she wants to talk to everybody first. Kind of explain things, I guess, before the old bad penny shows up again.”

“But ... Jacob’s pale face under its thatch of straw-colored hair was puckered with worry.

Gib went on, “It’s all right. I’m not hungry. And anyways, I got something to eat there in my bag.”

Jacob went out reluctantly, still looking over his shoulder. It wasn’t until they’d all disappeared and their echoing footsteps on the old wooden stairs had faded away to nothing that Gib went back to bed number five. Number five had been Charlie Biggs, if he remembered right. Gib remembered Charlie. A funny-looking kid, with one off-track eye and spiky, no-color hair. Must be ten or eleven years old by now. Gib sighed, wondered about Charlie for a moment, and wished him luck before he sat down on the edge of the bed, pulled out his duffel bag, and took out Mrs. Perry’s package.

The sandwiches were full of things no boy at Lovell House ever laid eyes on, lettuce and tomatoes and thick slabs of ham and cheese. They looked mighty good all right, but something was interfering with Gib’s appetite. He ate a few bites, then rewrapped the package carefully and put it away. After he’d pulled off his boots, he flopped down on the bed with his arms behind his head, and began to try to face up to the fact that it was really true. He had come to live at the Lovell House orphanage, just as he had done once before—almost six years ago.

W
HEN GIB TRIED TO
look back to the years before he’d come to live at Lovell House, there were only bits and pieces. He didn’t know why. He knew he’d been about six years old when he showed up that first time, because Miss Mooney had told him so. But it surely did seem likely that in six whole years a person would store up a lot more memories than what he could call to mind. More than the few scenes that, even when they were bright and clear as life, seemed to be unconnected to any reasons or explanations. Nothing that told him what the memory meant, or what it had to do with where he’d come from, who he’d belonged to, or why he’d wound up at Lovell House.