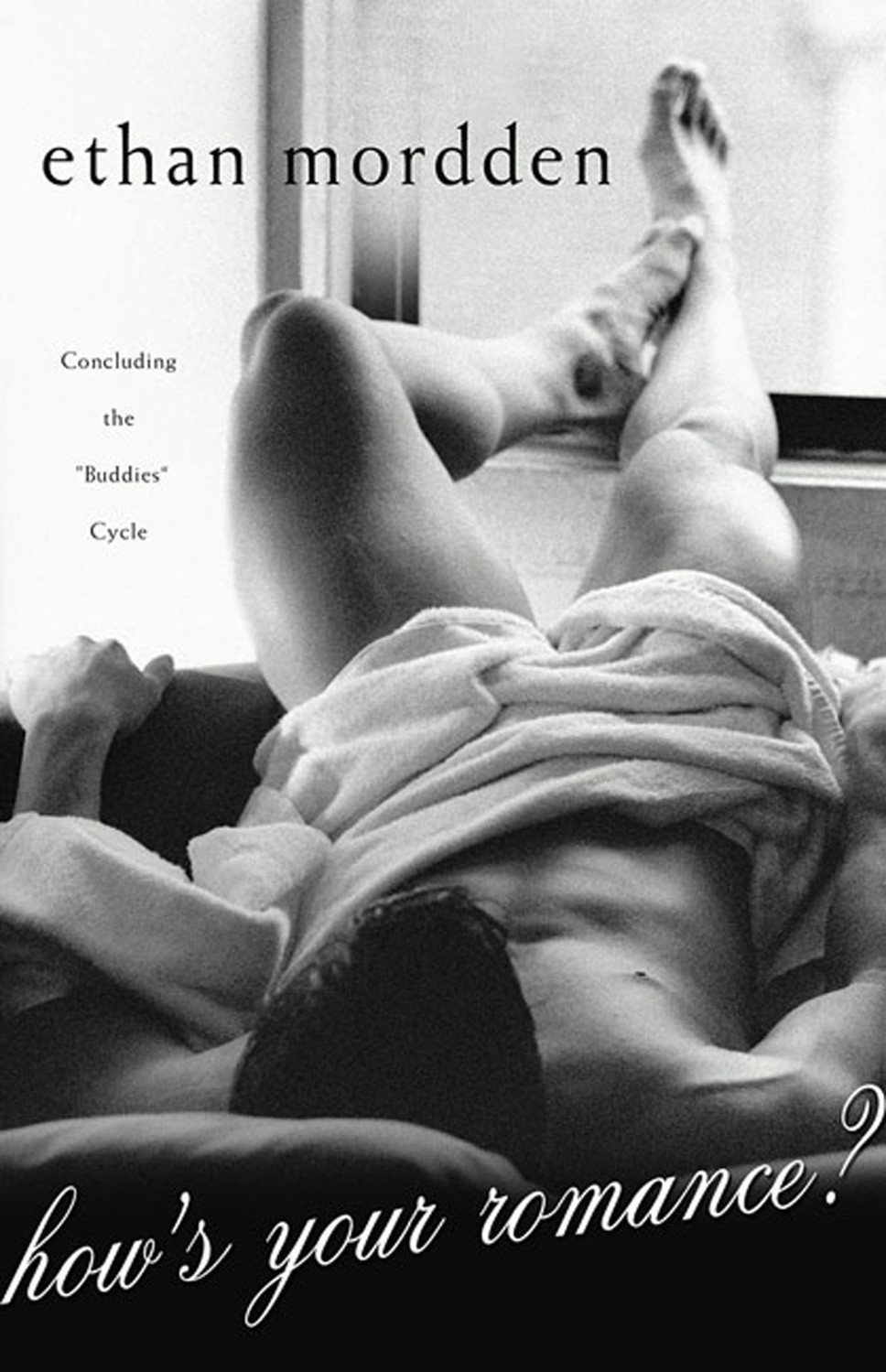 Introduction: In Which Nothing Happens

1. Tell Them About the Flip

2. There Are Only Three Kinds of Love

4. We’ve Been Waiting for You for a Long Time

5. A Death Threat from My Father

6. Will All the Straight Guys Please Get Out of This Book?

Other Fiction by Ethan Mordden

To Gregg and the Boys

I
WAS RECRUITED DURING INTERMISSION
at a performance of
South Pacific
at the Brandywine Music Circus in Concordville, Pennsylvania. My father, a building contractor, had taken me along on an inspection trip of his sites—the motel outside Waretown, New Jersey; the torpedo plant in New London, Connecticut; rest stops along some turnpike; and the new courthouse in Concordville.

These trips were great fun because of the incidentals, such as amusement parks, afternoon tea-dancing at the hotels, and especially summer theatres, generally “in the round” inside a great tent. These are virtually extinct nowadays; however, decades ago summer theatre was a mainstay from Maine to Virginia and from Long Island to Minnesota, most often featuring the so-called “package tour.” This offered some show-biz star or merry has-been leading a company of unknowns in new plays or old musicals. Tallulah Bankhead never missed a season; she always claimed it was this or debtor’s prison. At various times, Dolores Gray, Kitty Carlisle, and Jane Morgan tried
Lady in the Dark.
Norma Terris and Allan Jones exhumed themselves and operetta. Gypsy Rose Lee took over Ethel Merman’s role in
Happy Hunting.
To a Broadway veteran like me, this was a hodgepodge. Still, a musical is a musical.

Anyway, Concordville had one of those tents, and our visit coincided with a week of
South Pacific
starring Don Ameche and Betsy Palmer. My girl-in-every-port father saw a dating opportunity in depositing me at the Brandywine Music Circus, and I was alone in my seat waiting for the second act to start when a non-descript but dapper character slipped into the place next to me, set a new sheet atop his clipboard, and asked, “Name?”

Now, I should warn you that
South Pacific
is a Joshua Logan show, Logan being the co-librettist and director of the original production. A lifelong hibernating gay who was unwittingly out to everybody but himself, Logan habitually dressed his musicals with shirtless hunks in, for example, a swimming-pool scene and even a physique parade in a college football team’s locker room.

South Pacific
’s hunks are Seabees, one of them, by Logan tradition, a Hercules. I was trying to decide which one I preferred—yes, even then I knew—when the clipboard guy joined me. He asked for basic data only, yet was clearly weighing my answers. I said, “What’s all this about?”

“Your contract. Last question: who do you like the most?”

Impulsively, I made my mind up: “The blond on the end. With the shoulders.”

I signed, he handed me a carbon, and he bustled off to quiz an avid youth sitting across the aisle in a Peter Pan collar, surrounded by aunts.

Looking over the contract, I was mystified by all the sexual boilerplate—what was “rimming”?—but I wasn’t too young to see the immense advantage in two exemptive clauses, one from marriage and the other from military service. There was a rider advising that wearing green on Thursday was now optional and—most interesting to me—a kind of sermonette at the end on the importance of friendship.

It’s interesting because while gays supposedly have a lot of sex, what most of them really have is a lot of relationships, including odd ones. My odd ones are uncountable, but my close odd ones are with the former Little Kiwi, now known as J., and Cosgrove, the two juniors in my personal gay family. Playmates, business partners, and allies against the world, they sometimes turn into rivals in a competition whose prize is unknowable and whose rules are unclear. Tension can break out at any moment, so let us proceed to another intermission at a musical. For his birthday, J. had asked me to take him and Cosgrove to
Les Misérables.
Most people pass the interval just sitting there, finding the bar, or visiting the belasco (my mother’s euphemism, when we were kids and out in public, for the toilet). J. spent the time testing Cosgrove on the plot, and what he thought would happen next.

“What if I don’t know?” Cosgrove fearfully asked.

“You must understand what each story is about,” said J., “if you want to learn how life is.”

“It’s about love,” said Cosgrove, none too sure.

“Everything’s about love,” replied J., with a patronizingly reassuring smile. “Let’s be specific. Guess who divides. Guess who conquers.”

I butted in and offered J. fifty bucks, silvershine on the barrelhead, if he could recount the show’s plot thus far. He couldn’t, of course. Hugo’s novel has tons of plot, tons even that the musical had to omit, including a touching relationship between the street urchin Gavroche and two homeless and very young brothers whom he temporarily takes care of, none of them aware that Gavroche is in fact the boys’ brother, too. I shared this bit of intelligence with the kids, who were fascinated. “How come they didn’t know?” Cosgrove asked.

“They are all progeny of the novel’s villain couple, les Thénardier, who only raise daughters. The boys they dispose of.”

“Did Gavroche and his brothers ever learn the secret?” Cosgrove asked.

“Gavroche is killed during a battle between revolutionaries and Authority, and Hugo leaves the other two fending for themselves in the ‘great monster,’ Paris.”

Cosgrove was quiet, but J., irked at my crabbing his act, huffed out, “I don’t see what all that has to do with a trip to the theatre.”

“Theatre is education,” I pointed out. “That’s why gay boys are born theatregoers.” To which I added, “Theatregoers and runaways.”

“How so?” asked Cosgrove, as J. decided to study the actors’ bios in the playbill and make angry little fooing noises.

“Well,” I said, “like Gavroche and his brothers, we’re cut off from our families of origin and the social system they champion or simply stooge for unthinkingly. We make our own families, invent
our
system. You need smarts to do that. So—education. The older among us kind of take care of the fledglings.”

J. turned a page of his playbill so brutally that it ripped.

“Did anyone take care of you?” Cosgrove asked.

“I didn’t need it, because of all the theatre I’d logged. But if I had been needy, someone would have seen to it. It can be an informal thing, you know. People looking out for you without your even noticing. Or it can be very structured, as with you and J. Have the two of you ever had sex, by the way?”

Cosgrove’s eyes widened, and now he, too, began touring tensely through his program.

“I’ve been wondering from the beginning,” I went on, “and there would be a kind of symmetry to it, as everyone else in the family has had carnal knowledge of the rest of us at least once that I know of. And … well, runaways will do that when they first meet, if only to … what? Discover the size of the commitment?”

“Here’s all about the plays that were seen in this theatre eons ago,” J. announced.

“I now know who the wardrobe supervisor may be,” Cosgrove put in.

“You’ve had plenty of opportunity and a bond of spectacular proportions,” I went on, rather enjoying myself. “This is weight-lifted love, or at least it was.”

At that they momentarily glanced at each other, then went back to their reading. “But what’s wrong with a little cheating now and again? One of the worst aspects of hetero marriage is this absurd belief that one should—even
can
—live without sensual variety. One can’t, of course. So, already, every breeder is lying all the—”

“At last!” cried J., as the houselights dimmed.

I can’t. I want to know what is true in the world. I already understand why Gavroche is killed: in war. But I don’t understand why love is killed. J. used to be the life partner of my best friend, Dennis Savage; and now he isn’t.

Okay. Okay, another change of scene, to the little park at the eastern end of our street, overlooking the river.

“He went astray,” I tell Dennis Savage. “Then he saw how wrong that was and came back repentant. Why not forgive?”

“He is not repentant,” my buddy tells me, quite casually. He doesn’t care to extend himself about it. “He’ll find a new daddy in due course, and it won’t be the likes of me. That little tyrant of the heart has had all the middle class he can use. He’s heading for the margins, where nothing is forbidden.”

I try this: “One, He hurt me by leaving. Two, He is so changed that the fit is off. Three, I was tiring of sharing every aspect of existence. Four, Other, please specify.”

Dennis Savage sighed as a Circle Line boat glided past us on its cruise to nowhere, ever in quest and ever ending up where it began.

A moment. The boat. The vast emptiness before us. The breeze. A vagabond on a nearby bench having a rowdy conversation with, it turned out, Lee Harvey Oswald. A New York moment.

Back in our building, we parted in the elevator, and I wondered whether I would ever get to miss what Cosgrove had been, which, right now, was Very Domestic: carefully following a water-blurred index card bearing Dennis Savage’s recipe for Stuffed Rigatoni, an intricately brilliant dish in which homemade pasta is filled with the most finely chopped spinach, raisins, walnuts, bacon, and chicken, and the sauce is … It takes hours. But it was Thursday night, time for J.’s weekly dinner with us, which Cosgrove instituted out of fear that, on his own, J. wouldn’t eat right.

“Does Dennis Savage really get all this slice-up mush into these little things?” Cosgrove asked me when I looked in on the prep.

“I think you’re supposed to stuff the pasta before you cook it.”

Cosgrove stopped stuffing. “
Now
they tell me! How will J. come back if we don’t show him the best of everything?”

“He isn’t coming back,” I said. “Last week, when you brought out those tiny handmade pretzels as an appetizer, he hardly said a word. Once he would have raved.”

Surveying the kitchen, which lately had the look of the Versailles bakeshop on the night Louis XVI married Marie-Antoinette, I said, “I wonder if he’s worth this trouble.”

“It’s not the same,” Cosgrove agreed. “But you have to hold on, out of family honor and secret sadness for what it was in the old days.”

“Are you ready to say if you two ever had sex or not?”

“Yikes, my sauce is thickening at a frantic rate!”

“You can’t dodge me forever. I’ll have the secret before this saga is over, I swear.”