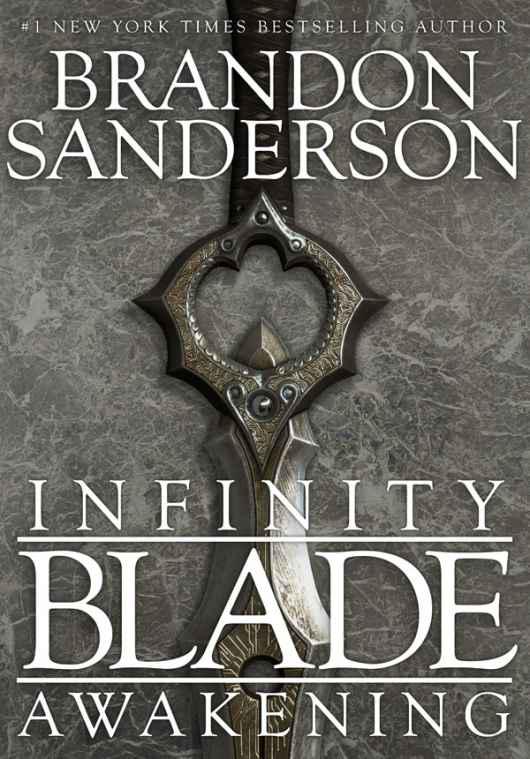 Other books by
B
RANDON
S
ANDERSON

The Way of Kings

T
HE
W
HEEL OF
T
IME
, with Robert Jordan
The Gathering Storm
Towers of Midnight

This is a work of fiction. All of the characters, organizations, and events portrayed in this novel are either products of the author’s imagination or are used fictitiously.

G
OD
’
S DEATH
didn’t do much to change the lives of the people of Drem’s Maw. In fact, most of them didn’t even know their deity had been slain.

Those who did, however, took advantage.

“There is nothing at all to worry about,” Weallix said, raising his hands as he stood upon an improvised stage made from two carts. He was flanked on one side by a daeril, a hulking creature that only shallowly resembled a man. Daerils came in many types, but this one had deep violet skin and arms as thick as tree trunks.

“You’ve always paid your taxes to me, and I’ve passed them along,” Weallix continued, speaking to the gathered crowd. “Now I’ll keep them myself, and I’ll be your lord. It will be good for you to have a leader who is more local.”

“What of the God King?” someone called from the nervous crowd. Things had been the same in Drem’s Maw for centuries. They worked themselves ragged to meet quota, and were bullied into giving up almost everything they had for the tax collectors.

“The God King has no complaint regarding this arrangement,” Weallix said.

Members of the crowd grumbled, but what could they say? Weallix had daerils and soldiers—and, supposedly, the God King’s blessing.

A stranger stepped up to the edge of the crowd. The air tasted wet and smelled of minerals; Drem’s Maw had been built inside a massive cavern. It had a large grinlike opening a hundred yards across at the front, and thousands of stalactites hung from the ceiling; many were so thick that three men holding hands wouldn’t be able to reach around them.

Only stumps remained of many of the gargantuan rock formations, however. A hundred enormous chains hung down from the cavern roof, their tops bolted to the stone. The town’s men climbed those chains each day and strapped themselves to the ceiling, where they mined for the precious minerals the God King demanded.

The location of buildings in the town shifted month by month, moving out from beneath where the miners worked. Even still, most people—men, women, and children—wore a helm to protect them from falling bits of rock.

“Why now?” one of the braver men called. “Why make us have a local lord, when we’ve always been able to pick our own leaders before?”

“The God King needs not explain his ways to you!” Weallix yelled. Instead of a helm, he wore his publican’s cap and a rich velvet costume of violet and green.

The townspeople stilled. To disobey the God King was death. Most didn’t even dare question.

The stranger rounded the crowd’s people, passing between dangling chains with thick black iron links. Some people gave him looks, trying to peer at his face, which was lost in the cowl of his deep hood. Most dismissed him, assuming he was one of those who had come with Weallix. They got out of his way as he walked toward the center of the crowd, where the publican continued explaining his new rules for the town.

The stranger didn’t shove or push; the crowd wasn’t pressed together so tightly that he needed to. He passed one of the thick chains and hesitated, reaching out and resting his fingers on it.

Woven into that chain were ribbons of blue, remnants from the festival that had occurred here a week before. Fallen flower petals—now wilted—still lurked in some cracks and corners. Some of the buildings had even been repainted. All for the Feast of the Sacrifice, a day that came only once every two decades.

“. . . So, of course, there can be no questioning my authority,” Weallix said. He pointed toward the front of the crowd, to the man who had asked the question earlier. “Wouldn’t you say?”

“Excellent,” Weallix said. “Let’s see you beaten and be on with our day, then.”

“Questioning again, I see,” Weallix said. He waved curtly. “A price must be paid. You will remember to whom you belong.”

Daerils began to descend upon the townspeople. There was variety to the inhuman monsters in skin, shape, and color, some with claws, others with eyes that burned. They shoved among the people, grabbing young women from their families—including the daughter of the outspoken man.

“No!” the man said, trying to push the daerils away. “Please, no!” One daeril—lean like a wolf, with bony knobs on its skin and a face that appeared burned—hissed, then raised its sword and swung down at the man.

A
clang
rang through the cavern.

The townspeople, the daerils, and Weallix all seemed to notice the stranger for the first time. People pulled back from him in a ring.

Then they saw the sword.

That
sword
. Long and smooth at the sides, with a distinctive set of three holes in its center . . . it was a symbol every child in the land was taught to recognize. A symbol of power, of authority, and of rulership.

It was the God King’s own weapon.

The daeril was so surprised that it could do nothing but gape as the stranger spun the weapon and impaled the creature through the throat. The stranger moved in an eyeblink, ripping the sword free and dashing forward, cloak trailing behind him. He grabbed one of the chains, moving with practiced familiarity, and swung on it. He swept to a pair of daerils who were towing a young woman toward the stage.

The two fell easily. These were not the champions of the God King’s palace; they were simple brutes. The stranger left them gurgling in their own blood.

Weallix started yelling, calling for his soldiers. He raved and ranted, pointing. Then he cut off, stumbling back as the stranger grabbed a chain and pushed forward, swinging up and landing with a thump on the wagons. The purple-skinned daeril struck with a thick-headed mace, but the God King’s weapon—the Infinity Blade itself—flashed in the air.

The daeril looked with befuddlement at the stump of his mace. The head thumped to the floor of the cart. The daeril’s corpse followed a moment later.

Weallix tried to leap from the cart, but fell to his knees as the vehicle shook. As he rose, he found the blade at his neck.

“Call them off,” the stranger said in a soft voice.

“Daerils!” Weallix cried. “Release the people and stand back! Stand back!”

The stranger’s hood had fallen behind, revealing a silvery helm that covered his entire face. He waited as the monsters retreated to the edge of the clustered townsfolk. Then he raised his blade—dripping with blood from the monsters he’d slain—and pointed toward the mouthlike opening into the town. “Out. Never return.”

Weallix obeyed in a scramble, falling to the ground as he climbed from the cart, then dashed at a full run out of the cavern, his daerils falling in around him.

The cavern fell silent. The stranger finally reached up and peeled his helm from his head, exposing sweaty, brown-blonde hair and a youthful face.

Siris. The Sacrifice. The man who had been sent to die.

“I have returned,” he told the townspeople.

Siris could hear them talking in the other room of Renn’s hut. Siris sat quietly, holding a small bowl of soup in one hand. Fenweed, a very healthy soup. A warrior’s soup.

“Well,” Master Shanna said, “we can’t exactly blame him, can we? For living, I mean?”

And Siris had gone, just as his father and his grandfather had gone. Dozens had been sent over the centuries, always from the same family. A family sheltered, protected, and hidden by the people of the land.

The Sacrifice, it was called. It was how they fought back. The only way. They’d live beneath the oppressive thumb of the God King. They’d pay nearly all they had in tribute, would suffer the brutality of men like Weallix—who, up until his power grab, had been only a simple tax collector.

But they would make this one act of rebellion. One family, hidden. One warrior each generation, sent to show that the people of this land were not completely dominated.

Hell take me,
Siris thought, looking down at his bowl.
Even I didn’t expect to defeat him.
Siris had gone in with the dream that maybe—if he were incredibly lucky—he’d get a single cut on the God King, make the tyrant bleed.

Instead, he’d slain one of the
Deathless
.

The other room fell silent, then the whispers continued, softly enough that he couldn’t hear.

I really did it,
Siris thought.
I’m alive.
It was only now beginning to sink in. He looked down, then pointedly set the bowl aside.
And that means I never have to drink this dreck again!

He stood up, smiling. He had dreamed of what might happen if he actually killed the God King. He hadn’t dared hope, but he had allowed himself those dreams. He’d imagined triumph, celebrations. He’d imagined exulting in his victory. Oddly, he didn’t feel exultant. Instead, he just felt
free
.

Being the Sacrifice had dominated everything he’d ever done. But that was done with.
Finally
. Finally he could figure out who he was—the person he could be when he didn’t have this terrible duty weighing him down. He hesitated, then fished a small woodbound book out of his pocket. His mother had given it to him and told him to record his thoughts each night as he traveled to the God King’s castle.

His mother and he were among the few in the town who could read. The Sacrifice had to be literate. Siris wasn’t certain why—it was merely tradition. He hadn’t considered it an arduous requirement; reading and writing had come easily to him.

The logbook was empty. Siris had never written in it, and felt foolish for ignoring his mother’s suggestion. He hadn’t been able to force himself to do it. He’d been marching to his death, determined to avenge his fathers who had fallen to the God King’s blade. Not by killing the creature, but by fighting him, by proving that—despite what he may think—the world was not completely his.

Siris’s mother had included a charcoal pencil with the book. Siris raised it and turned to the first page. There, in bold letters, he wrote one sentence.