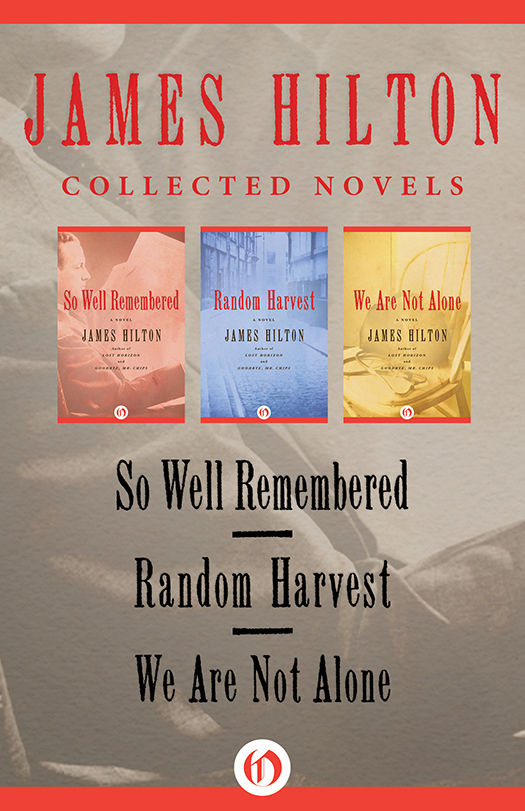 We Are Not Alone

T
HAT DAY SO WELL
remembered—a day, indeed, impossible to forget—was the first of September, 1921; on the morning of which George Boswell—then only Councillor Boswell, then sandy-brown-haired with not a trace of gray—woke before dawn, looked at his watch, and promptly slept again till Annie brought in the morning paper, a cup of tea, and some letters that had just arrived. Amongst them was a note from Lord Winslow’s secretary, saying that His Lordship would arrive at Browdley station by the noon train, in good time for the foundation-stone laying; and this made George very happy and proud, because Lord Winslow was not an ordinary kind of lord (a type which George, never having met any, imagined for himself and then proceeded to scorn on principle), but a special kind who had not only devoted a lifetime to public service but had also written several distinguished books.

At half past seven George got up, put out his blue serge suit (the one reserved for big events), and shaved with especial care, scanning meanwhile the cheerful headlines of the paper propped against the mirror, and noting with approval, whenever he looked beyond it, the misty promise of a fine summer day. By eight he was at the breakfast table, eating ham and eggs and exchanging good-humored chatter with Annie, the elderly “help” who looked after the house and did her best to overfeed him during his wife’s absence; by nine he was at his desk, composing an article for the
Browdley and District Guardian,
which he owned and edited. He did not write easily as a rule, but this time the phrases came on a wave of exhilaration, for though he had a few private doubts that the Treaty of Versailles was all it should be, he was prepared to give the future the benefit of them, the more so as it was natural for him to give the future the benefit of anything. Anyhow by ten George had composed a suitably optimistic editorial; noon saw him at the railway station to welcome Lord Winslow; by one o’clock he had made a short speech at the Town Hall luncheon; and by a quarter to two he was in his seat on the improvised dais at the corner of Mill Street, blinking in the sunshine and beaming his satisfaction to the four winds, one of which, then prevalent, wafted back the concentrated smell of Browdley’s industries. But George did not mind that—indeed, it was the remembered perfume of his childhood, of days spent on the banks of the canal that threaded its way between factory walls, taking waste water hot from each one, so that a fog of steam drifted over the surface and spread a low-hanging reek of oil, chemicals, and machinery. Waiting on the platform for the ceremony to begin, George sniffed and was happy.

A great day for Councillor Boswell and for Browdley, and also (one gathered) for England and for the world. History, George reflected, could not have done a better job of dramatization—August Thirty-first, the Official End of the Great War (some sort of lawyer’s technicality, but it still made good news.)—September First, the Foundation-Stone-Laying of Unit One of the Mill Street Housing Scheme that was to replace some of Browdley’s worst slums. A great day, indeed, George, as his glance roved around, was proud to have the dedicator (a Bishop) on his left, the guest of the occasion (Lord Winslow) on his right, and various local bigwigs beyond and behind; but he was proudest of all to see the crowd, and only wished it as large as it would have been if Browdley folk weren’t such notorious slackers about civic affairs. He said so later, when he got up to speak, and was applauded for his downrightness. George, in fact, was invariably downright; it was natural for him, and a quality which, sometimes disconcerting but always good-humored, did as well in Browdley as the smooth tongue of the diplomat, and perhaps better. There was a legend that when he had wanted a rich local manufacturer to donate a mansion for use as a municipal museum, he had said: “See here, Bob, I’m not
asking
this—I’m
demanding
it. You and your folks have exploited this town for the best part of a century—if there was any justice you’d have been hanged long ago. But as there isn’t—let’s have that house.” And he had got it.

Furthermore, George thought, it was a shame that only a few hundreds, instead of thousands, had turned out to welcome a man like Lord Winslow—or was it possible they didn’t know how distinguished Lord Winslow really was? But George’s personal enjoyment of the proceedings was not to be lessened—not even when the town brass band began to play Sousa rather badly in the shadow of a large Union Jack hung upside down—a detail that remained unnoticed save by a solitary busybody who afterwards wrote a letter about it which the
Guardian
did not print. Altogether the scene was typical of many a quietly happy English occasion during those distant years when Englishmen could be quietly happy.

George’s face was also typically English (which means, perhaps, nothing more than that he might have passed, in their respective countries, for a Dane, a Norwegian, a Swede, a German, or a Norman-Frenchman, but not so easily for an Italian, a Greek, or a Spaniard); at any rate, he was blue-eyed and ruddy-cheeked, the mouth expanding into smiles of shy benevolence as greetings came from the crowd, the chin steady and square, with none of the false dynamism of the acute angle. George, at thirty-five, was a good-looking man, if one cared to call him that, but he seemed to merit some solider adjective than could be applied equally to youthful film actors and tennis champions; there was a touch of earthiness in him that matched well with his wide shoulders and strong hands and genial provincial burr. It was a quiet, almost a humorous touch, behind which, in a sort of ambush, there lurked ambitions and determinations that had already left their mark on Browdley.

This housing development was one of them—a modest triumph (George called it) of practical idealism over the 90 per cent of apathy and 10 per cent of pure selfishness that comprise idealism’s biggest enemy. George could justifiably smile as he stared about him that September afternoon, for this was the first fruit of his Councillorship and the first postwar improvement in Browdley to get beyond the talking stage. Only George knew the struggle it had been through almost incredible thickets of vested interests and government red tape; but here it was at last, something actually begun after all the argument, and his friends and fellow citizens might well give him a cheer. Even the Mayor, who was among his strongest political opponents, could not restrain a reluctantly cordial smile.

George was telling the Bishop that he had been born in one of the slum houses just demolished—Number 24, Mill Street, to be precise—and the Bishop was chaffing him about not having had it preserved as a place of historic interest with a mural tablet to commemorate the great event. George laughed and said he would have taken such an idea far more seriously twenty-odd years ago, and then he confessed as a small boy he had once read how the desks at Harrow School were carved with the names of famous men; and that in order not to disappoint posterity he had carved his own name on the inside of the privy door at the end of the backyard of Number 24—not a very romantic substitute for a desk at Harrow, but the handiest available in his own limited world.

“Ah, dear me,” exclaimed the Bishop, who was a Harrovian and a little shocked at first, but then when he looked at George’s face, so clearly that of a man telling a simple story of something that had very simply happened, he was won over, as people nearly always were by George; so he added with a smile: “Ah well—a harmless occupation, I daresay.”

George went on without realizing the extent of his conquest: “Aye, it was the only place I was ever left alone in those days, because we were a large family, and a four-room house doesn’t allow for much privacy. Fortunately my father started work at six in the morning and didn’t come home till six at night—I hardly saw him except on Sundays when he marched us all off to chapel.”

“Ah, grand folks, those old Nonconformists,” murmured the Bishop, turning on the magnanimity.

“He was a local preacher too,” George continued, pointing suddenly up Mill Street. “There’s the chapel, and there—”swinging his arm in the opposite direction—“there’s Channing’s Mill, where he worked—”

“I’m afraid so.” The Bishop smiled ruefully. “I—er—I once had a few shares in it.”

“You were better off than my father, then, because he had a lifetime in it. From the age of ten to the day he died—fifty years, and for half of every year, except on Sundays, he only saw daylight through the mill windows.”

George chuckled. “Maybe, but he didn’t feel that way, I don’t believe it ever occurred to him. He was quite content all week looking forward to Sunday.”

“When he enjoyed his preaching, no doubt.”

“You bet he did, and he was a dab hand at it too. I’ve heard him last a couple of hours, without a note, and fluent all the time.”

The Bishop sighed. “Ah, that’s a wonderful thing—to possess the gift of tongues, so that one never has to think for a word—”

“Maybe that’s it,” said George. “It’s the thinking that spoils it.” His eyes twinkled and his voice, as nearly as a voice can, nudged the Bishop in the ribs. “Once I remember my father started off a prayer with ‘Oh God, if there be a God—’ but he said it in such a grand booming voice that nobody noticed it any more than he had.”