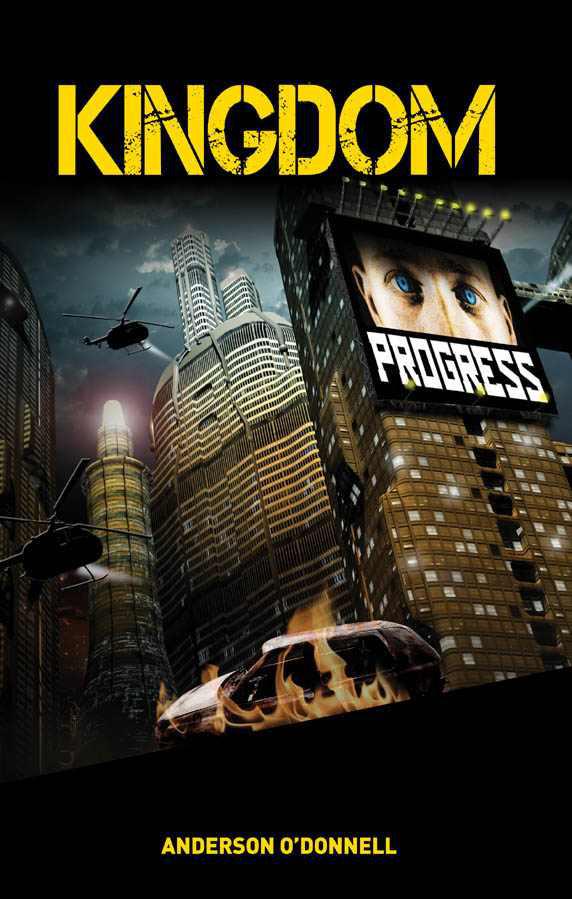 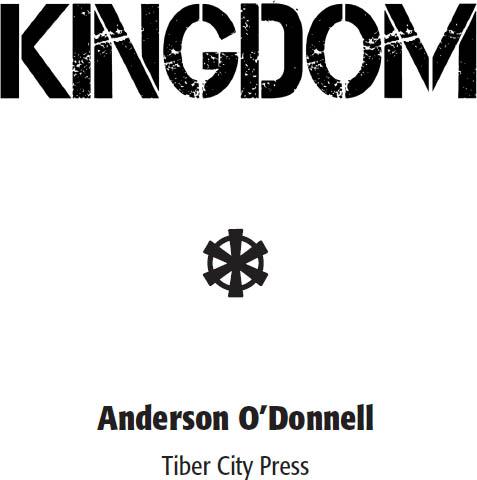 T
hree weeks ago, I wrote the following introductory essay for Anderson O’Donnell’s debut novel,
Kingdom
. This essay, I have just discovered, is now obsolete and misleading. I include it here as an illustrative comment regarding the writer and his work.

Not so long ago, I was sharing a drink with O’Donnell at the Vernon, way back in the ship room. We were tippling some Bushmills and talking, believe it or not, about Aquinas’ theory of the soul and its ability to exist outside the body. Somehow, O’Donnell made an interesting connection between Aquinas and John Lydon. Or maybe it was Joe Strummer. I was about to ask for some clarification when his cell phone went off. My young friend held up a finger and disappeared into the men’s room. A few minutes later he returned, shaking his head.

“There’s a story about to break in Mexico,” he said, sliding back into the booth. “Mutated soldier ants.”

“Yeah,” he said, nodding. “They protect the colonies. But these mutations are apparently man-made. Gigantic heads. Ridiculous strength. And get this, they can spray formic acid like their bullet-ant brethren.”

“To science,” I said, raising my glass.

“All about the
coulda
,” he responded, quoting Patton Oswalt, “and never the
shoulda
!”

And thus, a typical night in Wormtown on the Blackstone.

Typical, in fact, of almost any night I happen to spend with the mysterious Mr. O’Donnell. Whether it be in New Orleans. Or Marseille. Or Berlin. For he is plugged-in deep. Hardwired to information sources of which most of us will never hear, let alone access. I have known the guy over 10 years now and I still have no idea where he gets the tidbits he casually lobs like plasma grenades across the saloon table. I don’t even know which of the many rumors about him have any credibility.

For instance: I tend to believe that he
has
worked at a variety of weird-ass think tanks. But I doubt that any of them were located in Central America—his Spanish strikes me as classroom slick. I sometimes believe that, yes, okay, it is
possible
, however unlikely, that he once labored as a child audio engineer for Throbbing Gristle. But I reject the story that he is really the love child of Genesis P-Orridge and Lady Jane Breyer. Likewise, I have no evidence that he spent some time in a heretical Gnostic seminary somewhere in Japan. But, Jeez, the guy knows a lot about Gnosticism and where to get the best sushi in Kumamoto. (Supposedly, a place called AzumaZushi.)

What I have, like all his other acquaintances, are anecdotes both amusing and perplexing. I first met the guy at a rare reading by the late, great fantasist, Donal Zies, in the sadly defunct Roanoke Lounge down on Lafayette St. (It was a small crowd that night, but it included Patti Smith
and
F.G. “Froggy” MacIntyre and Sol Yurick.) At intermission, I went out into smokers’ alley for some air. Three young punks were involved in some kind of transaction on the far side of a pink dumpster that smelled, I still recall, of burning sulfur. One of the transactees was wearing, I swear, a three-quarter-length chartreuse leather coat. Despite this fact, I tried to ignore them. Tried to dream up an opening line with which I could introduce myself to Yurick. But their haggling took an ugly turn into mother-based obscenities and some pushing and shoving. Soon, one of the trio was knocked to the ground. To this day, I don’t know why I didn’t just hightail it back inside or even back to
the worst room I have ever had at the Chelsea. But this was the heyday of the Doc Martens steel-toe and the thought of a guy’s cranium being bashed in by somebody in a chartreuse leather coat annoyed me for some reason. Also, one side of my family is loaded to bursting with cops and, I’ve found, in moments of stress I can give some passable cop-voice. So I turned in their direction and said something like, “Is everything alright over there?”

Realizing they had an audience, Chartreuse and his buddy took a moment to reach down and take something off the assualtee, and then strolled out of the alley. I walked over to the dumpster to give a hand to the guy on the ground but he was already upright by the time I arrived.

Seeing that I wasn’t a cop, O’Donnell’s first words to me were, “When did the fanboys turn vicious?”

He was dressed, I’m pretty sure, in black jeans, a white t-shirt, and an old Dark Carnival tour jacket. He brushed himself down and said, “I’m just pissed. Fuckers took my rent money,” then, looking up at me, added, “Are you Vinny? You here to score?”

That night I was more on the wagon than off, so I shook my head at him and turned to go back into the lounge.

“Hold on a second,” he said from behind. I stopped, he came around in front of me and slapped a stained manila envelope into my chest.

“Listen,” he said, standing between me and the back door to Roanoke, “Screw Vinny, right? He’s late and you’re here.”

He nodded but kept the envelope pressed against my chest.

Then he just walked away.

I never made it back into the Roanoke for the rest of Zies’ reading. I never got to meet Yurick or MacIntyre or Smith. Overcome with curiosity, I made my way to that horrific Roanoke rest room and opened the envelope I’d been given. Inside was the weirdest manga I had ever encountered. You think
Uzumaki
and
Soma
are weird, kids? The stuff in O’Donnell’s envelope makes them look like
The Family Circus
. The artwork was
amazing
and deeply unsettling. If I write,
It was like Giger on a barrel of DMT
, I would be criminally understating the case. I will admit that I am no connoisseur of the weird, but I know people who are and, when I’ve shown them the contents of
that envelope, they react in ways that encompass aspects of both the violent and the swooning.

I left the Roanoke toilet on a mission to find the young man who’d given me this bizarre, brutal, gorgeous, epiphanous artwork: The envelope had a return address that brought me to the Gray’s Papaya at 72
nd
and Broadway. I hung out there for three nights before I spotted the man from the alley. He did
not
seem surprised to see me. More like amused.

He surprised me by doing the same without any hesitation and, noting the similarity of our names, said, “We’re bog-trotting cousins.”

He bought us dogs, then took me to an afterhours club downtown, where we drank some strange hot chocolate before adjourning to the rooftop, which must have contained a half-dozen leather couches that had been ruined by the rain. There he explained that he was currently working as the North American broker for a pair of Japan-based brothers, known collectively as “Gaki.”

“The online scuttlebutt,”—yes, he used that word—“says they’re twins, but they’re not.”

One brother or the other had been trained as a pathologist. One brother or the other was severely schizophrenic. They lived, O’Donnell explained, “underground—both figuratively and literally. They come from a very wealthy family, which is utterly ashamed of them. And they’re geniuses.” The brothers were involved in a lifetime’s project of producing an epic, serial narrative, which had no title, no captions, and no dialogue bubbles. Just images. Such as the ones I’d seen in the alley outside the Roanoke Lounge.

Though it’s a great one, I won’t go into the story of why and how O’Donnell eventually broke with Gaki. I will simply say that they were only one of many influences that inspired O’Donnell to leap into the world of biopunk. There are numerous others, some of which I know would surprise you. Some of which come from those subterranean information nodes, of which O’Donnell appears to have a psychic ability for locating and plundering.

The story you’re about to read,
Kingdom
, is your introduction to a narrative as wild and large and exciting as anything those Japanese siblings dreamed up in their freaky little lair. The story gets bigger as you proceed. And Tiber City is just one pulsing gland inside the heaving new creature that O’Donnell has been constructing for the past decade. This is
a gargantuan and complex transmedia beast, folks. And yet, you need to remember as you read that half of its DNA comes from the underground global news services into which O’Donnell is always jacked. So consider that warning your passport stamp. And hold on tight as this thrilling new writer takes you into tomorrow’s territories at speeds that will rattle your spine.

The Undead Kama Sutra by Mario Acevedo
The Feast of the Goat by Mario Vargas Llosa
Rogue with a Brogue by Suzanne Enoch
The Seventh Mother by Sherri Wood Emmons
Violet (Suitors of Seattle Book 7) by Kirsten Osbourne
Easy Silence by Beth Rinyu
The Confessions of Frances Godwin by Robert Hellenga
After the Sky Fell Down by Nugen Isbell, Megan
Loving Protector by Quilford, Sally
ChasingSin by Sara Brookes